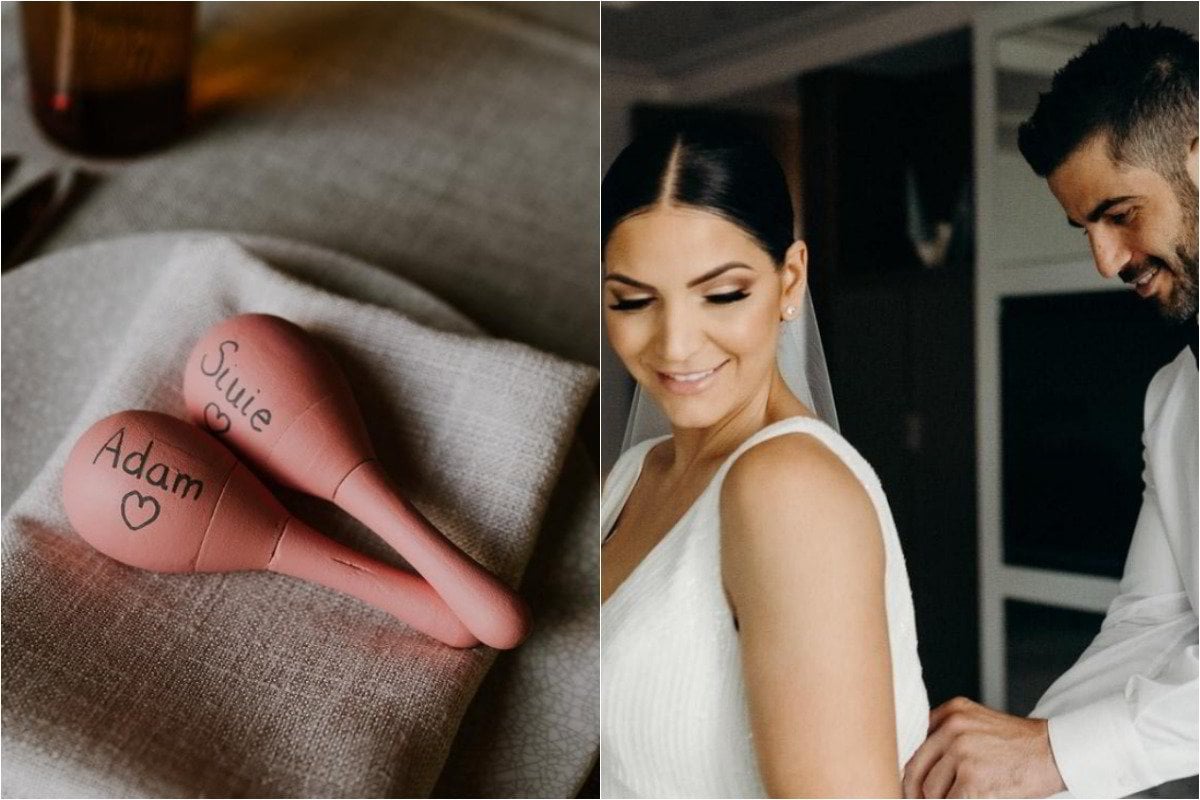 While weddings can often appear picture-perfect on blogs or social media, the reality can at times be glaringly different. But we're only human - and sometimes the near-disasters of your dream day make for the most epic memories.

From a tipsy mother-of-the-bride and a pre-ceremony car crash to wedding dress debacles, we’ve compiled some of our favourite bloopers shared by real couples - so settle in for a laugh and rest assured, no matter what goes wrong when your big day arrives, it’s how you handle it that counts.

“Accidentally ordering 150 baby rattles, not maracas, was definitely one of those moments. When people saw them on the night, they thought it was a gender reveal and that I was pregnant! My mother-in-law also had a lot of fun spreading that rumour amongst family.” 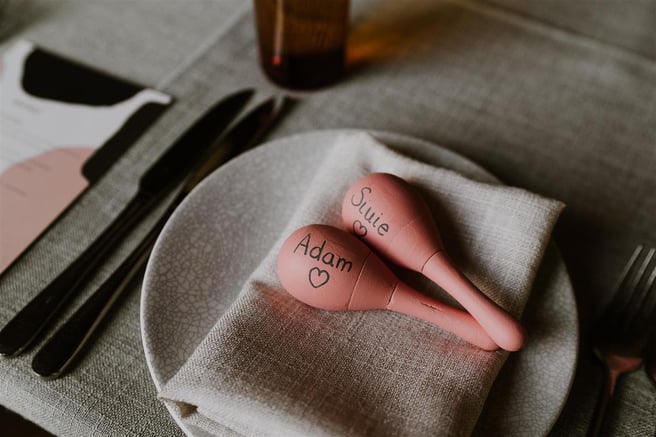 “Our friends threw us an Indian pre-wedding ceremony called a Sangeet. Whilst there, all of the wedding party took part in the Henna/mehndi traditions. Unfortunately, we collectively didn’t look after the designs properly and a couple of days later it looked like strange stains on some of the Bride Tribe’s hands. This led to furious exfoliation being undertaken in the days leading up to the wedding.”

“As we were getting ready, I was taping myself up and needed the tape to be trimmed, which I asked my partner Z to help with. This was about five minutes before we were due to leave the hotel and he accidentally cut me with the scissors. A little bleeding flesh wound in the shape of a heart. Surprisingly, I was more calm than Z, and had to reassure him that it was fine and not a big deal.” 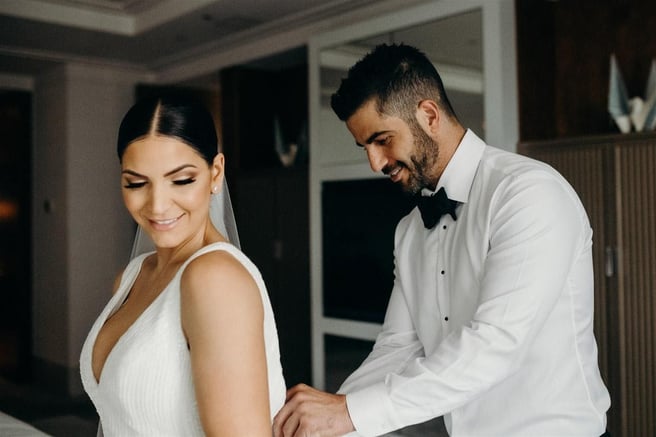 "One of the wedding cars actually crashed into three cars on our way to the wedding. We had two cars; a Maybach and an old Buick, which was carrying the bridesmaids. The brakes on the Buick failed on the way to the wedding ceremony and to stop the car, the driver crashed into three other cars. This sounds like a horror story but you have to see the positives and we were so lucky that the crash happened in the same street as [our venue] Como House so it didn’t prevent us from getting to the wedding. We were also very fortunate that the car was travelling slowly down the street at the time.

"Rightfully so, the people in the cars that were hit were in shock and initially angry until they saw that there was a wedding party inside and myself getting out of the other car. One of the girls whose car had been hit even ran over and gave us all hugs and told us to have the best time and not to worry about it!

"Thankfully nobody was hurt and my bridesmaids were total champions about it. In a strange way it almost came as a welcomed distraction to take my mind off my nerves.

"Ironically, it wasn’t the first car accident that week as a car had driven into my car just two days before the wedding. I’d never had a car accident before and suddenly there were two accidents in one of the biggest weeks of my life!"

“We had Father Bob from the Father Bob Macguire Foundation as our priest. With his busy schedule and laid-back approach, our wedding slipped his mind and when we called to confirm three days before the wedding he said “Jesus, Mary and Joseph… this weekend!?”. Luckily he was able to still make it even though it was not in his calendar.” 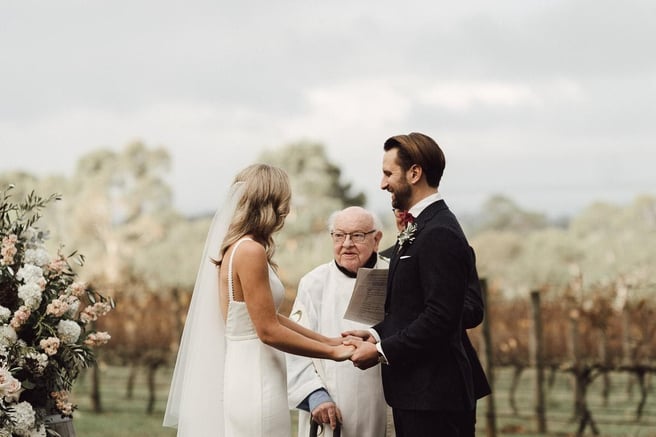 “During our ceremony the world’s biggest bull ant decided to crawl up the back of my dress. My family in the front row spotted it and watched in horror as it worked its way up my dress getting pretty close to my bare back. My dad swung into action, flicking it quickly off me but straight in the direction of my bridesmaids! There were a few screams at the time but looking back through our photos at this moment, the looks on our guests' faces are hilarious!”

“Mum almost failing a breath test on the drive to the wedding after too many celebratory breakfast champagnes (she will kill me if she reads this!).”

“We actually had a small electrical fire (just before sunset) and it blew out the power for the whole venue. Luckily my Dad and brother-in-law work with generators. Tom and I walked away with our photographer for our sunset photos and said “we’ll be back when its fixed”, and when we returned, the generator was up and going and the power was back on! Also, when I was saying my vows to Tom, I skipped his first name and called him by his middle name ‘Alexander’ instead of Tom. Luckily there were no Alexander Stokes’ in the crowd!”

“There were so many I wondered if Ashton Kutcher was going to jump out with a film crew.  It started with the wedding cars not turning up because the company had booked them for the following day. The bridal party had to be taken in the videographer’s car and eventually they sent one car for myself and my dad, it was a pretty silent ride! During the ceremony, a bee joined us and everyone was standing up behind me swatting it away. Whilst the bee debacle was happening my veil flew into the candles and my bridesmaids swiftly rescued it before I went up in flames. However, the pinnacle of the wedding disasters was just before the speeches, everyone was seated and the camera was set up right in front of the bridal table. My sister was trying to help me sit down with my dress and pulled out my chair, I didn’t know and I sat down too soon and ended up on the floor mortified. I just started laughing or I knew I would cry, I crawled back on my chair and the show went on. I’m hoping each wedding drama equals an extra few years of a great marriage.”

This post originally appeared on Ivory Tribe and has been republished with full permission. For more wedding stories, check out Ivory Tribe’s real weddings archive here.