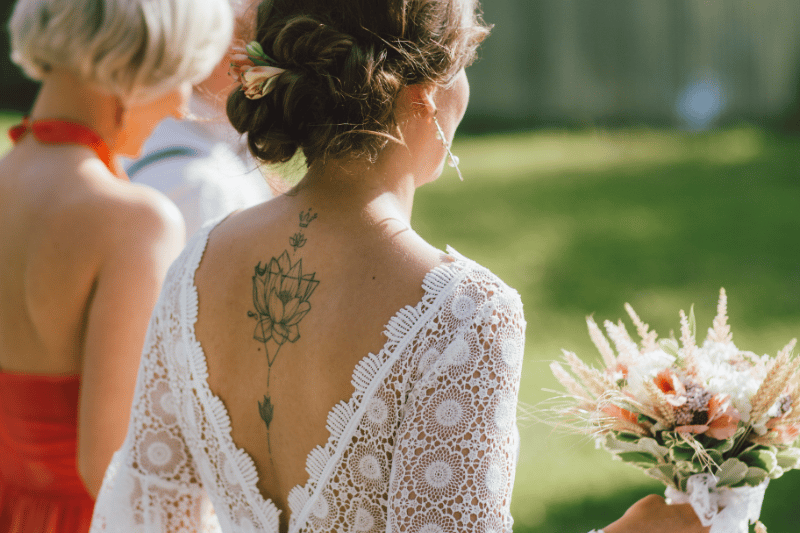 COVID-19 has changed the way we do many things, including our “I do's,” with many planned nuptials over the pandemic still going ahead — but vastly differently to the way they were planned.

But before all this, many moons ago (okay, 10 years) when I walked down the aisle, my husband and I also did something a bit differently, and not everybody liked it: we asked guests to pay for their plus-ones.

Now, before I'm labelled a scrooge, or cheap, I was 24, my husband and I paid for the entire wedding ourselves and this decision was only enforced for the plus-ones that we had not invited because we had never actually met them — like new boyfriends or girlfriends of a few weeks.

At over $100 per head, adding countless strangers to our bill wasn’t really in our budget, so we asked for these extras to be paid for by the guests we had actually invited. Despite learning that some weren’t happy about doing this, I wasn’t about to change my mind, and even now I wouldn’t have done it any other way. (Oh, and for the record none of these plus-ones remained plus-ones for long.)

And my husband and I are not the only ones who made an 'unpopular' decision. I spoke to five women about how they did their big day differently — and loved it. 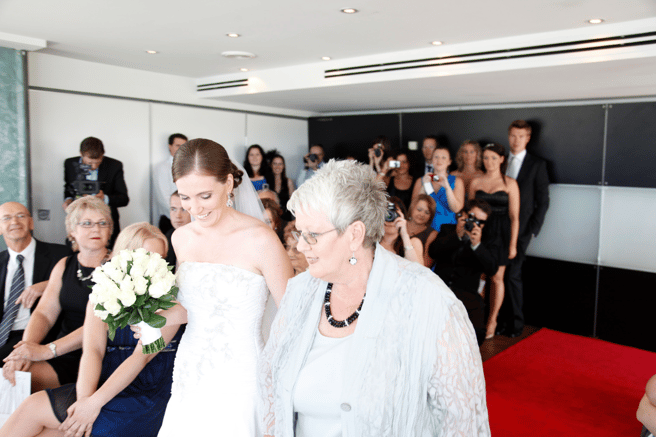 Lisa – went from a planned wedding of 200 to a wedding of four (and didn’t tell anyone.)

Due to COVID-19 restrictions, Lisa and her partner had to cancel their big wedding of 200 guests in New South Wales' Blue Mountains, to a wedding of four — the two of them, the celebrant, and their dog.

"The celebrant came to our home, we got married in the backyard with our dog running around excitedly, like he knew what was happening," she says.

"We decided to film the ceremony ourselves — just with an iPhone on a tripod. We then sent the video to all of our planned guests that evening, which would have been the actual wedding night. It was completely different to how we’d planned it, but I am so glad we did it that way."

Lisa said her parents were quite upset that the couple hadn’t waited until they could at least attend, but they eventually understood their reasons for doing it.

"It was intimate, and the most important people were there, and that's all that matters."

When Em married her partner five years ago she decided to ban kids from their wedding — at both the ceremony and the reception.

"I just wanted people to relax and have a good time and not be worried about their children the entire evening which I often see happening at other weddings," she told Mamamia.

"Plus, I didn’t want a baby crying or a toddler getting bored and throwing a tantrum half-way though our vows.

"I had one or two guests ask me if they could bring their kids despite our request and when I stood firm they declined to come. That was their choice and that’s fine, I respect that, but I am also so glad I didn’t change my mind because everyone who came had a wonderful time, and the ceremony was perfect."

Lauren – surprised everyone with a 30th birthday-turned-wedding.

Lauren not only got married in her own backyard, she coordinated a wedding and disguised it as her Hollywood red carpet themed 30th birthday party.

"I just had my second baby three months prior so money was tight. Instead of having a big, expensive wedding, we decided to make it low-key and surprise people by getting married at home and doing it all ourselves," Lauren told Mamamia.

"Often people have surprise engagements, but a surprise wedding seemed different and I loved the idea. So literally up until I walked down the recently finished decking-turned-aisle, and a quick wardrobe change, people just thought they were there to celebrate my birthday," she says. 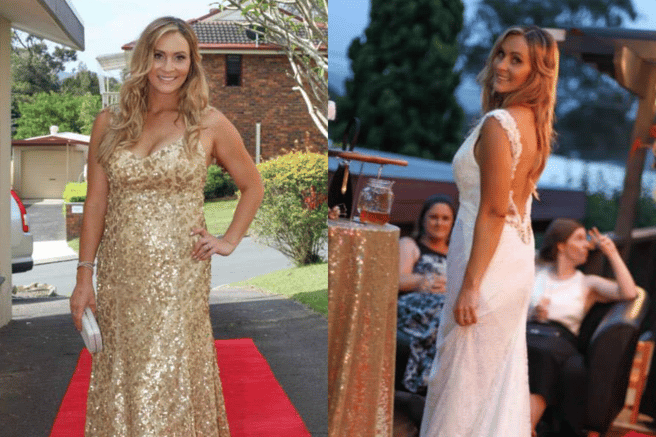 Although the event was loved by most, Lauren shared that some family members had expressed grievances about it being kept a secret, and that if they had known it was her wedding they would have attended.

Despite this, Lauren has no regrets about the way their wedding went down.

*Sarah asked people to remove their shoes and pop on some thongs.

"My main prerogative was for people to let loose and dance. And often heels get in the way, so I asked all my guests to take them off when they came into the reception and pop on thongs instead," she told Mamamia.

"Most guests loved the idea, but some were upset that they had to take off their expensive pair of shoes in case they got lost. One guest was angry that she had to ruin her outfit by wearing thongs. But ultimately, they all danced, so clearly the plan worked!"

"I decided that I wanted people to talk to people they didn’t always speak to and actually socialise. So instead of seating guests next to their close friends or family, I mixed them up with others they didn't know as well," Kate explains.

"I didn’t pre-warn them I was going to do this, and you could tell there were a few disgruntled people to begin with, but as the drinks started flowing the room was filled with chatter."

Shona Hendley, mother of cats, goats and humans, is a freelance writer from Victoria. An ex secondary school teacher, Shona has a strong interest in education. She is an animal lover and advocate, with a morbid fascination for true crime and horror movies. You can follow her on Instagram.

Reply
Upvote
8 upvotes
I attended a wedding once where ALL people who knew each other were separated. It was bloody horrendous. All these groups of people stuck with people they didn't know, as soon as formalities were over everyone left there "assigned" tables and went and found their friends. People didn't even go back to their tables to eat the dessert, it was all just abandoned. At the end of the day....your wedding...your choice..... but I'm still referring to this as the worst wedding I've ever been to 10 years later.
M
maree123 2 years ago

Reply
Upvote
6 upvotes
I’m all for unique weddings, but the last two sound so disrespectful to their guests! I’m actually embarrassed for the bride (and groom). Insisting grown adults change their shoe of choice into thongs is patrionising. I’ve attended incredibly fun weddings with wild dance floors and not one couple has enforced such a ridiculous rule.
One of the best parts about attending a wedding is catching up with your close friends. I have so many beautiful memories of laughs shared with friends over a meal at a wedding. People mingle and chat after they eat and begin to feel more comfortable... and even if a couple of introverts or anxious people don’t - does it really matter? Imagine being that inconsiderate towards your friends and family...
Resources
Very Peri
Skin
News
General
Opinion
True Crime
Politics
Sport
Explainer
Entertainment
Celebrity
Reality TV
Movies
TV
Books
Rogue
Royal
Lifestyle
Beauty
Fashion
Weddings
Home
Wellness
Health
Fitness
Travel
Food
Family
Before The Bump
Pregnancy
Baby
Kids
Teens
School
Parent Opinion
Work & Money
Money
Finance
Career
Lady Startup