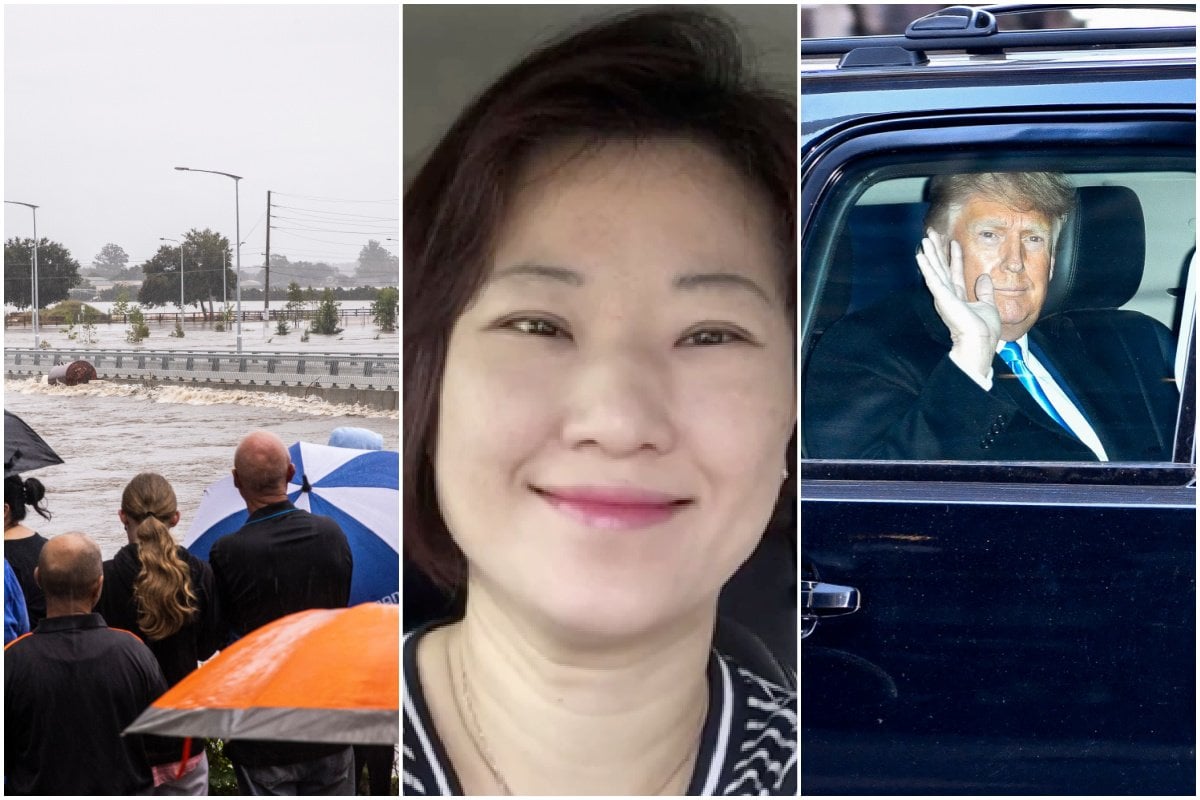 Communities along the Hawkesbury River in NSW are bracing for once-in-a-generation flooding that could displace residents and disrupt utilities for months.

The Bureau of Meteorology expects Monday to bring the worst flooding event to the area northwest of Sydney since November 1961, nearly 60 years ago.

Floodwaters are expected to rise to major levels on Monday morning and inundate places such as Windsor, Pitt Town, North Richmond, Freemans Reach and Colo.

Homes and communities are on edge as the east coast is battered by a one in 100-year rain event. Stay tuned to TODAY for Special Coverage of all the latest weather updates from your city. #9Today pic.twitter.com/Wb9XBWwE3P

The Hawkesbury is predicted to reach a peak of about 15 metres on Monday afternoon and the State Emergency Service says homes and properties will be flooded, some up to roof height.

The floods will cut off evacuation routes and cause lasting outages to utilities, the SES said as it urged evacuations.

"Extensive outages of water, electricity, sewerage, telecommunications and gas are expected to last many weeks or months," the SES said early on Monday.

The event is likely to exceed the capacity of emergency services, who have already responded to some 8000 calls for help, the SES said.

The Warragamba Dam has already spilled over, prompting some concern. Parts of Penrith and other areas along the Nepean were ordered to evacuate on Sunday as NSW battles devastating floods after days of unabated rain.

Scores of people have already been rescued from floodwaters, while prison inmates have been evacuated and more than 100 schools remain shut.

READ: NSW's rainfall is set to continue until Wednesday. These photos show the damage so far.

The rain might be forcing humans indoors, but it's bringing mice to the surface, with the downpour worsening the already debilitating mice plague invading towns across NSW's central west.

Rodents are inundating rural properties at astronomical levels, with local stores forced to box away produce to save their stock from gnawing teeth.

"The shop stinks because they're dying inside, so people are going elsewhere to get their groceries," grocer, Nav Singh from Gulargambone told the ABC.

Member for Barwon Roy Butler has called on the state and federal governments to offer some form of rebate for controlling the problem.

"I've been asking for assistance in meeting the cost of baits — and that's just not people on farms that's also people in town, in businesses, a lot of people are on limited or fixed incomes and the cost of keeping up the baiting is just crippling them financially," he said.

NSW Health confirmed that three people were bitten by mice while being treated in Tottenham, Walgett and Gulargambone.

Four people have died in two separate crashes in Queensland in a horror day on the state's roads.

Two young men were killed in a three-vehicle smash involving two utes and a car at Bracalba north of Brisbane on Sunday afternoon.

A 20-year-old man driving the car and a 22-year-old passenger both died at the scene, police said.

Police said the car was travelling in the opposite direction of the two utes on D'Aguilar Highway when they collided about 3.45pm.

Three men who were in the utes were take to hospital with non-life-threatening injuries.

Less than an hour later, a collision between two cars near Bundaberg claimed the lives of two women.

A 52-year-old woman died at the scene of the crash at Kinkuna and a 32-year-old female passenger died later in hospital.

The national medicine regulator has given a green light for the domestic production of AstraZeneca's COVID-19 vaccine, paving the way for Australian-made batches to be released within days.

The Therapeutic Goods Administration has given its approval for CSL to manufacture the AstraZeneca vaccine at its two Melbourne sites in Broadmeadows and Parkville.

"Today's approval is a critical and very exciting milestone in Australia's response to the COVID-19 pandemic," the TGA said in a statement.

The national medicine regulator has given a green light for the domestic production of AstraZeneca’s COVID-19 vaccine, paving the way for Australian-made batches to be released within days. #7NEWS https://t.co/ChTdbtt2Uj

The approval doesn't extend to use, with the regulator still needing to review vaccine batch documents and test doses to ensure they meet manufacturing standards.

The TGA said receipt of the final batch release documentation from AstraZeneca was anticipated "imminently".

"It is anticipated that the first batches will be released in the next few days," it said.

"These will form the mainstay of Australia's COVID-19 vaccination program over the coming months, and complement imported vaccine supplies."

The phase 1b rollout - for people over 70, Indigenous Australians over 55, those with a medical condition or disability, and workers deemed high risk - is due to start on Monday.

The son of Sydney mum Min Sook Moon has expressed his family's grief after the man charged with her murder faced court for the first time.

Min Sook Moon, 49, was reported missing by family members earlier this month after she failed make contact with them.

Ms Moon was last seen walking along Rawson St in Epping on the afternoon of March 8, with a police strike force determining she entered a vehicle in a car park on the same street that day.

This is 49-year-old Min Sook Moon. Min disappeared from Epping in NSW on March 8. Police have just charged a male with her murder. pic.twitter.com/6vbgESwNgl

Officers went to a park at Silverwater and found a body on Saturday afternoon, NSW Police said.

The body is yet to be formally identified and a crime scene has been established at the park, while forensic analysis is also taking place.

Her son, Adam, said the family was "devastated" and "still coming to terms" with her loss.

"We have all been deeply affected by this tragedy, and it is very hard to know that she will never be coming home after being so cruelly taken from us," he said in a statement on Sunday.

"On behalf of our family, we want to thank the community for sharing our appeals for information, and also thank those who provided information to the police.

"As we continue to process this news, our family has requested privacy at this time."

Jung was charged with murder and refused bail to face Parramatta Bail Court on Sunday. He did not apply for bail and it was formally refused.

It means Jung, who requires a Korean interpreter, will remain behind bars for at least the next six weeks before facing Hornsby Local Court on May 5.

Two Australian business consultants have been detained in Myanmar while trying to leave the country which is gripped by a military coup, a news agency reports.

Business consultants Matthew O'Kane and Christa Avery are believed to be under house arrest after trying to leave the country on a relief flight on Friday, AFP reports.

The Department of Foreign Affairs and Trade has confirmed it is providing assistance to two Australians in Myanmar.

Two Australians detained in Myanmar after attempting to leave the country https://t.co/Wki8maeKqy

Fierce protects continue in Myanmar in opposition to military rule despite the death toll at the hands of security forces rising to more than 200.

Coronavirus cases are surging in parts of Eastern Europe and Turkey, filling up intensive care units and prompting fears of more restrictions.

Romania on Sunday recorded its highest number of COVID-19 patients in intensive care units since the pandemic began.

The increasing pressure on ICU wards, where 1334 people are currently receiving care, comes amid a surge of COVID-19 cases in the country.

Turkey's regional COVID-19 figures also keep increasing as the country keeps relaxed restrictions in place for now. Cases in Istanbul, the country's largest city are up 41 per cent since last week and are four times the figures from six weeks ago.

And Poland reported more than 25,000 coronavirus cases Saturday, compared to less than 15,000 in early March.

Former President Donald Trump plans to launch his own platform after being suspended from Twitter and Facebook in the wake of the January 6 riots.

One of his senior advisors told Fox News Trump would re-enter the social media space with a new platform of his own that would “completely redefine the game.”

“This is something that I think will be the hottest ticket in social media. Everybody is going to be waiting and watching to see what exactly President Trump does, but it will be his own platform,” he added.

Trump's Mar-a-Lago club in Palm Beach, Florida, has been partially closed after staff members tested positive for the coronavirus.

Trump moved to Mar-a-Lago after leaving Washington in January.

- The UK has administered a daily record of COVID-19 vaccines and more than half of the country's population have now received a first dose.

D
dragonlady25 a year ago