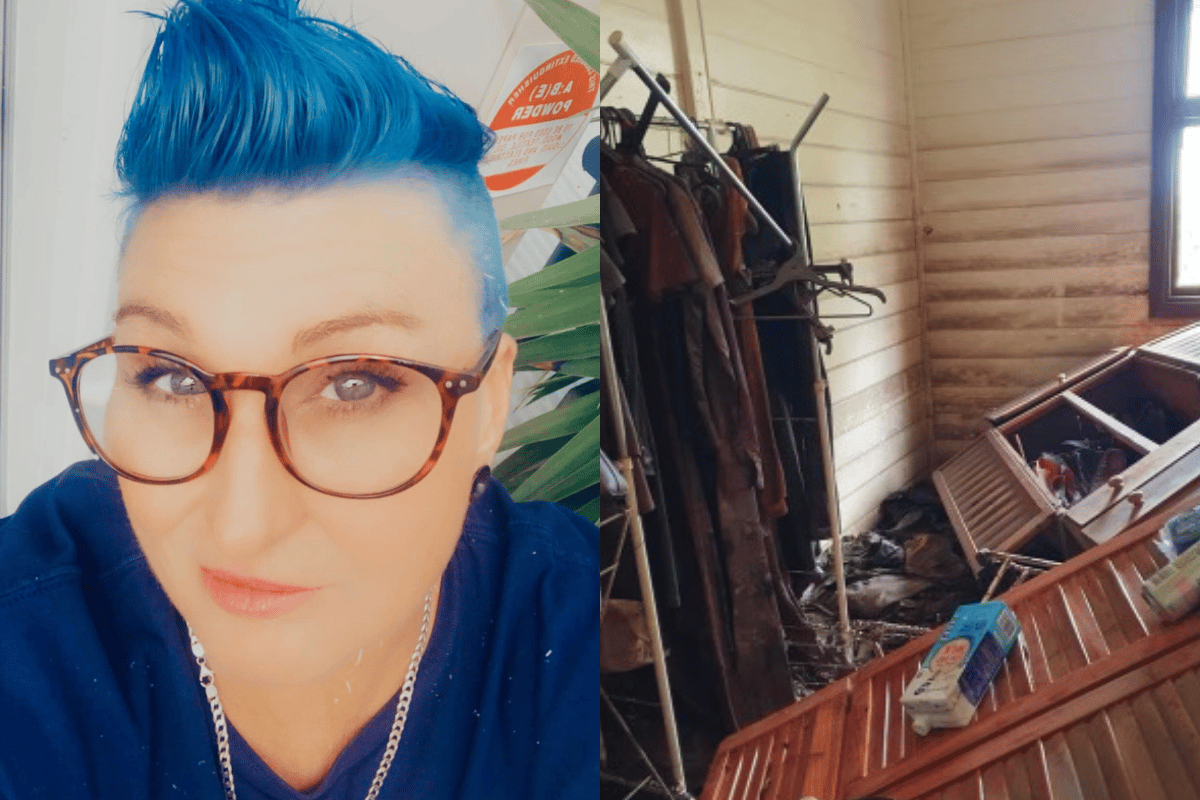 "I'm so sorry, we just don't have anything."

A woman from the emergency accommodation line told Cathy* over the phone after her family was left homeless in the NSW floods.

The mum-of-two had until 10am on Sunday to vacate the Byron Bay backpackers her family were temporarily staying in to free up beds for Easter tourists.

She had two days left to find a place.

"I was crying uncontrollably I didn't know what to do and I thought oh my god we're going to be on the street again after what we've been through," she told Mamamia.

Exhausted from living in a constant state of "survival mode", she rang again the next day and was finally told some good news. A caravan park in Evans Head had a cabin for her and her two children, who are both in their twenties, but only until this Friday.

"The lady on the phone said this was a miracle moment, she said to me you are so lucky."

And Cathy felt it.

She is one of around 60 flood victims who had to find a new place to stay to make room for tourists over the coming Easter weekend.

But despite the emotional toll of having to relocate again, she doesn't blame the businesses.

"These are businesses that are struggling themselves," she said. "They've been struggling since COVID and they've put their hand up and said, 'Look, we'll help people for as long as we can'.... You can't blame them."

Instead, she says the fault lies with the government.

"The government are the ones that haven't been there... There's a lack of government funding and understanding and lack of action. They're just not attending to us at all."

For Cathy, who is on a disability pension and suffers from extensive white matter brain disease and advanced multiple sclerosis, the lack of funding is felt heavily.

"I have rung the Red Cross and was told that all of the funds allocated had been used up."

"The only funds I have been given is $1,000 from Centrelink which was quickly used on accommodation and food."

But she says she hasn't received the other two payments of $1,000 as she doesn't meet the criteria, because her name wasn't on the lease of her East Coraki home she was renting with her daughter.

Cathy had only just moved in with her daughter the week before Christmas when she stopped working and was diagnosed with white matter brain disease and multiple sclerosis.

Unable to walk and talk, she was admitted to Lismore Hospital early this year and only discharged from hospital two weeks before the floods.

"I wasn't on the lease but my daughter was my carer through Centrelink and my address was there through Centrelink. I even have a letter from the hospital saying they have been seeing me since January because I was having treatment... I have government people backing me up saying 'yes, she did leave here'. And they're saying that's not enough."

"We just feel really let down," she added.

Cathy has now gone through all of her savings trying to survive after her house was deemed unliveable. All she has left is three sets of clothes and a bag of toiletries.

And she's not the only one who hasn't received funding.

"There's seven families that I know that have been knocked back, every single one of them, for funding."

"So they're saying on one hand, we've got all this funding. But on the other hand, you're going to have to jump through so many hoops that it will be unattainable for you to get. And that's how I feel the system is there just gaslighting people."

A month and a half ago, Cathy's family had to evacuate their home when catastrophic floods ripped through East Coraki.

It was around 3pm on Saturday, February 28, when water began rising to the second story of their home - a property that had always been safe from flooding.

With the water showing no signs of stopping, Cathy's family and a group of neighbours, including pets and a baby, who were seeking refuge at her home, clambered onto her roof for shelter.

"Through the window we passed the baby, two dogs, two cats, two kittens, seven adults, and climbed onto the carport roof then up onto a very angled corrugated iron roof, one at a time... Unfortunately, several of us slid and cut ourselves on the corrugated iron in the ordeal."

Once everyone had safely made their way to the back of the roof, the men went back inside the house as it filled with water to grab a tarp, a couple of camp chairs, a small esky and milk for the baby, not knowing how long they would be stuck on the roof.

By 4pm, they were calling triple-0 and SES but the lines were congested. With their phone batteries running low, they began contacting friends on social media to see if they could get ahold of anyone.

"At this stage it was sheer panic that no one would find us and the waters would engulf us."

The only helicopter and boat in the area had stopped rescuing people for the night as it was too dangerous and would be back for them the next day.

With a long night ahead of them, the group huddled together for warmth and safety, as the men stood watch and stopped snakes from slithering onto the roof out of the floodwater.

"We could not see anything as it was pitch black through the night. As we huddled in the rain, cold and darkness, we could hear cows screaming and drowning throughout the night… along with other animals all around us.

"The house was swaying and moving, and we were worried about it falling over. The torrents of the floodwaters were so ferocious that if we went into the water, it would have pulled us away from each other."

"I was praying and thinking please don't let my children die in front of me... I couldn't think of anything crueller than having to watch your child die or your child watching a parent die," she said tearing up.

"When we went to the [Byron Bay] backpackers, there was a gentleman that actually watched his brother drown trying to save a horse," she recalled as her voice broke. "And it was absolutely my greatest fear."

After 16 hours on the roof, the group were relieved to see an SES boat arrive around 8.30am the next morning.

Cathy and her family were taken by boat to the nearest island at Coraki only to find there was "no medical attention, no blankets, no water, no food, no shelter, no electricity, and no phone service". 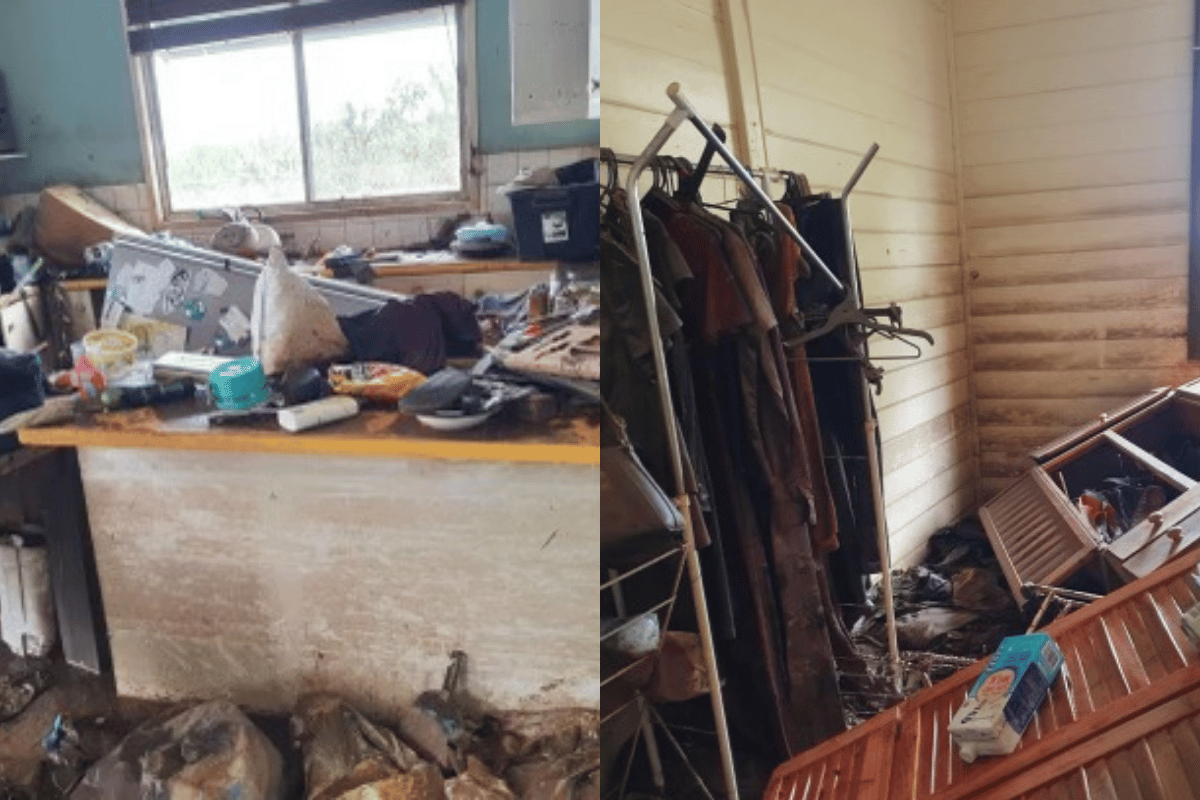 After a couple of days on the island, a young couple offered them shelter in their home, where they finally ate and drank water for the first time in three days.

Cathy later became ill and had to be taken to hospital after suffering injuries during the floods. Her skin was blistered, she suffered pneumonia and she pulled the muscles in her back climbing onto her roof.

While she's now back with her family, the entire ordeal has been "devastating".

"The emotional toll is absolutely incredible. I'm just teetering on the edge. And I'm trying to be strong and trying to get through for the children and trying to find another house."

"I don't know what is worse, going through what we had gone through, or surviving it... I can't go back to work, I can't rebuild, I'm stuck in this accommodation, there's nothing planned." 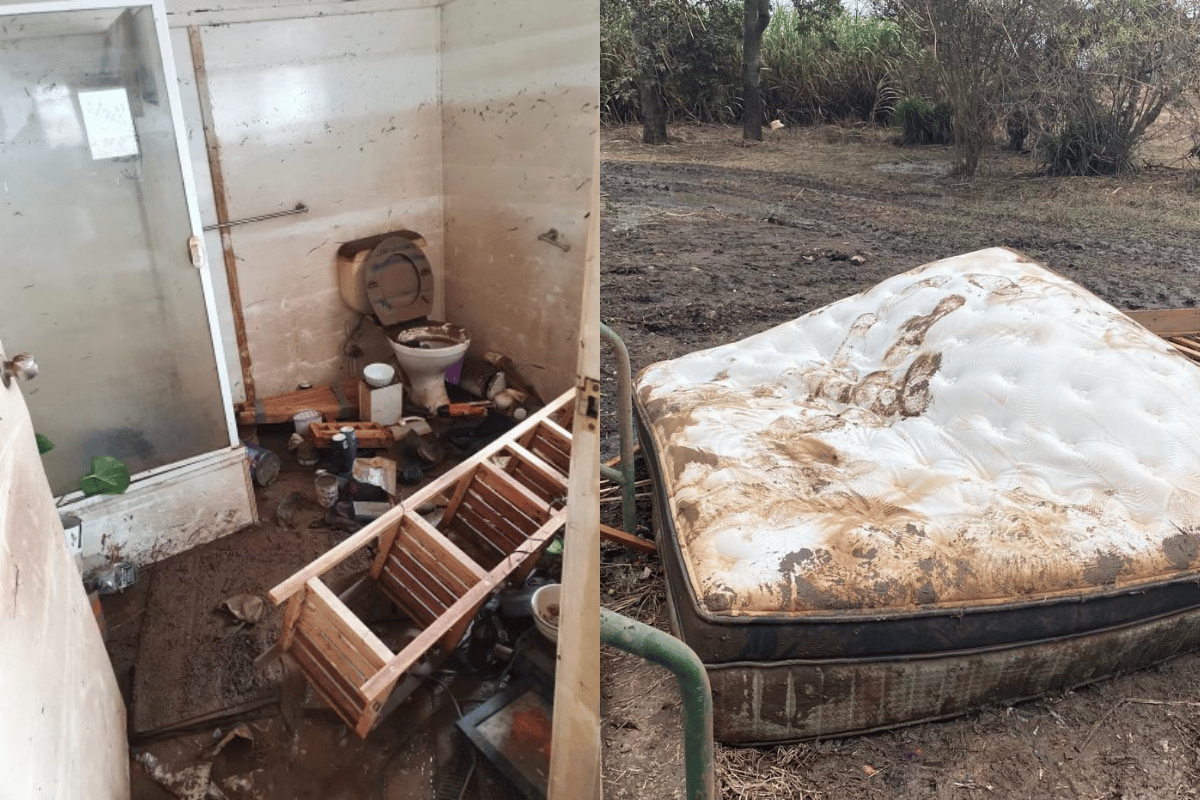 She's currently looking for a permanent home for her family, but hundreds of people are applying for rentals.

"Even without the bond money, I looked at a house in Ballina and there were over 100 applicants in the first hour of it being available to rent and they had to shut it down. That's the demand on rental properties at the moment, it is absolutely crazy."

Without a permanent place to stay, the family aren't in a position to accept household donations.

Right now, the family have access to their own shower, toilet and a place to cook for the first time, in Evans Head. But they need to be out by tomorrow.

Cathy was on the phone all morning yesterday to the emergency accommodation line trying to organise another roof over her head but she's had no luck.

"It seems as of 10am Friday morning we will be completely homeless again. There is just nowhere to house us."

"We are trying to access the Red Cross to get a $500 grand so we can buy a tent and air beds but still have not received any funding or help."

With thousands travelling over Easter, there are concerns others will be in the same position.

"So many people will be completely homeless from Friday morning."

If you'd like to support Cathy*, a GoFundMe has been set up to help her and two other families in a similar situation. You can find it here.

Reply
Upvote
Is there anything that can be done for them? Anywhere to donate? It seems like most of the media has moved on. But it was one of the biggest natural disasters that we’ve had, and all due to climate change.  And we thought nothing could be worse than the 2019/2020 megafires. Thanks for reminding us that people are still in need.
B
bridgetph a month ago

Reply
Upvote
@shauna020473  Hi Shauna, if you contact the reporter on her email (click on her name above) she'll put you in touch with the woman in the article, if you want to give to her directly. Or there is Vinnie's or Red Cross if you want to make a general donation.
A
alessandra.z87 a month ago