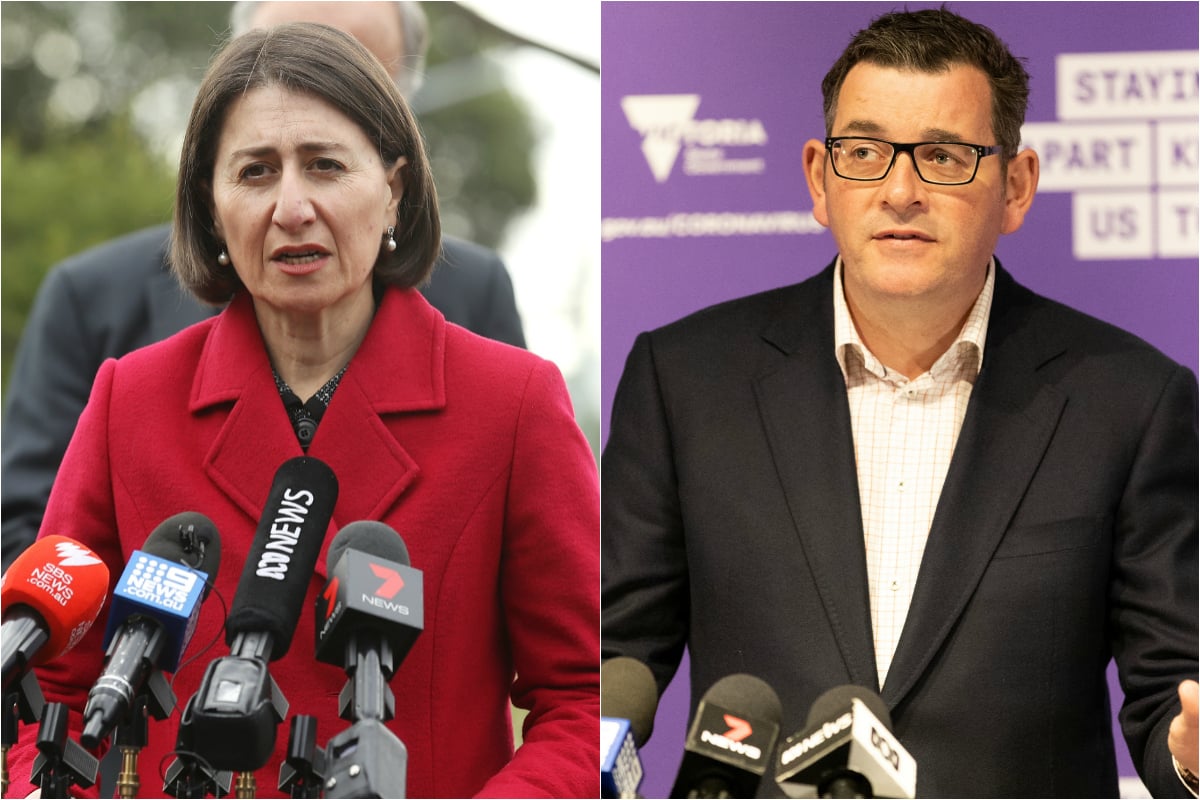 The NSW and Victoria border is set to close.

The border between New South Wales and Victoria will close from midnight on Tuesday, Victoria Premier Dan Andrews announced on Monday.

"From 11:59pm midnight tomorrow night the border with New South Wales will be closed. That is the result of a phone hookup with the Prime Minister and premier of New South Wales and myself an hour or so ago. All of us agreed the best thing to do is to close the border," Andrews said.

"It will be enforced on the New South Wales side, so as not to be a drain on resources focused on finding the virus right now across our state.

The decision follows a sustained and alarming increase in coronavirus cases in Victoria, where 12 postcodes identified as hotspots are in lockdown.

Victoria reported 127 new coronavirus cases on Monday, and one person in Victoria has passed away, bringing the national death toll to 105.

Berejiklian said no one from Melbourne will be able to cross the NSW border in the next 24 hours. This will then be extended to all Victorians from midnight tomorrow night.

"I want to stress that what is occurring in Victoria has not yet occurred anywhere else in Australia," Berejiklian said. "It is a new part of the pandemic and, as such, it requires a new type of response."

It will be the first time since the pandemic began that the NSW and Victoria border has been closed.

The decision was made during an early morning meeting between Andrews, NSW Premier Gladys Berejiklian and Prime Minister Scott Morrison on Monday.

Berejiklian urges "free and open borders with the rest of the nation."

Following the announcement of the NSW and Victoria border closure, Premier Gladys Berejiklian encouraged all other states to open their borders to NSW residents to encourage economic recovery amid the recession.

"I say to all the other States around Australia, use this as an opportunity to now take off your borders with New South Wales," Berejiklian said during her Monday press conference.

She added that the government will be relying on those returning from Victoria to self-isolate upon arrival in NSW.

NSW has only reported single-digit increases each day in the past week, with the majority of cases coming from returning overseas travellers.

Hundreds have signed a petition against Victoria's "racially charged lockdown".

Residents in Victoria's nine inner-Melbourne public housing blocks will live rent free for a fortnight after being forced into COVID-19 lockdown.

About 3000 people will have their rent waived for two weeks after a rise in coronavirus cases.

Twenty-seven cases have been found in the North Melbourne and Flemington towers.

Victoria’s immediate lockdown of an estimated 3000 residents in nine inner-city tower blocks in Melbourne has been seen rarely anywhere else in the world except China. https://t.co/AVR6XMbJOm

The state government announced the rental relief on Sunday, less than a day after telling residents they could not leave for at least five days.

Instead, food and medical supplies will be delivered to their homes.

Those who live in the buildings with jobs will get a $1500 hardship payment, while those not in the workforce will receive $750.

Thana Sirag told AAP on Sunday night that her family had not received a care box or food, and there's no sanitary pads or nappies available.

Amr Osman tweeted a video showing the box of food staples he'd been given, including cereal and jam but no bread or milk.

The government hasn’t provided us with shit they hv literally left single mums with 4-5 little baby’s with no baby formula no milk and no bread I’m literally nearly in tears from the amount of mother me and the boys distributed food to that where crying when we gave them food pic.twitter.com/3uasQhz7WC

The lockdown has prompted anger with more than 1300 people signing an online petition against the "racially charged lockdown" on Sunday, with 500 police officers stationed in and around the towers to impose the strict lockdown rules.

Queensland's hospitality industry is worried about government backlash after video emerged of a packed nightclub dance floor in an alleged breach of coronavirus restrictions.

Footage of clubbers dancing shoulder-to-shoulder is alleged to have been taken at Prohibition on Friday night, the same day pubs and clubs were allowed to reopen but dance floors were to remain closed.

Nightclubs AND their guests could be hit with hefty fines after footage emerged of party-goers flouting social distancing rules. #9Today pic.twitter.com/q3wX4dnw7V

Premier Annastacia Palaszczuk says police are investigating the club in Brisbane's Fortitude Valley to determine if the licensee has breached COVID-19 restrictions.

"We are all playing by the rules and getting it right, so we are very disappointed.

"Everyone is aware the dance floor is off-limits and we're hoping it doesn't affect anyone else," said Hirt.

Federal Opposition Leader Anthony Albanese has described holding the seat of Eden-Monaro as a "fantastic victory".

The former mayor of Bega said it was an honour to represent the southeastern NSW seat.

I'm pleased and honoured to be elected the next Member for Eden-Monaro.

To the people of Eden-Monaro – thank you.

I won't let you down. pic.twitter.com/tTpIZguggB

"It has been an election that has been fought on local issues, first and foremost," she said.

She said it was fought on bushfire relief, on COVID-19 and its economic impact on the community and the drought.

Joe Biden has vowed to "rip the roots of systemic racism out of this country" in a Fourth of July message that contrasted sharply with US President Donald Trump's warning at a Mount Rushmore fireworks display that "angry mobs" at protests against racism were assaulting America's history and culture.

In a video posted on Twitter, Biden, Trump's presumed Democratic challenger, said the United States had never lived up to the statement in the Declaration of Independence that "all men are created equal". That phrase has "gnawed at our conscience" through more than 200 years of institutionalised racism, including the recent police killing of George Floyd in Minneapolis, he said on Saturday.

Our nation was founded on a simple idea: We're all created equal. We've never lived up to it — but we've never stopped trying. This Independence Day, let's not just celebrate those words, let's commit to finally fulfill them. Happy #FourthOfJuly! pic.twitter.com/1WrATlx8Xl

"It's been a constant push and pull between the two parts of our character, the idea that all men and women - all people - are created equal, and the racism that has torn us apart. We have a chance now to give the marginalised, the demonised, the isolated, the oppressed, a full share of the American dream."

Biden's remarks came hours after Trump told a crowd of mainly white supporters on Friday night, at Mount Rushmore, that America was facing a growing danger from anti-racism protesters' "merciless campaign to wipe out our history, defame our heroes, erase our values and indoctrinate our children".

An excerpt from Trump's Fourth of July speech this evening: pic.twitter.com/4UcBNXjQn2

- Huge crowds have packed the streets of England as pubs reopen.

- Spain has locked down two regions in 24 hours, amid fears of a virus outbreak, with more than 270,000 people affected.

- After five straight days of small increases, Italy has recorded 192 new cases on Sunday - the first decline in a week.

It's fantastic that he might have the opportunity to do this now, after 40 years in government, including 8 years as VP under a black President...
L
laura__palmer 2 years ago