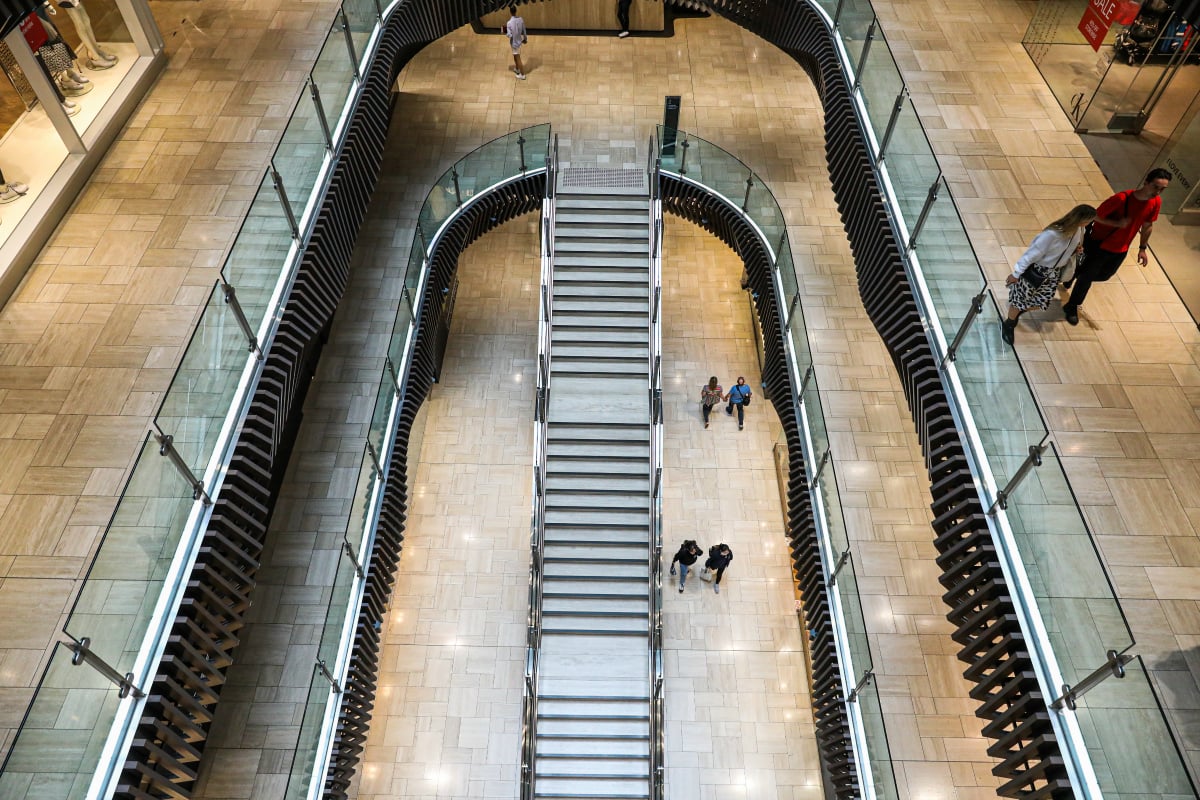 Nobody likes talking about the COVID-19 endgame, but we need to choose one. The appropriate interventions – public health, government spending, and freedom of movement – all depend on the endgame we choose.

Many discussions are underestimating the likely political reactions when death counts rise.

They are also underestimating the economic and social consequences of an open-ended epidemic that will have enormous real-world impacts on small and medium businesses, as well as many not-for-profit organisations in every sector of the economy and society. We are not facing up to the social consequences if many close, and credit markets collapse.

None is attractive, but one is better than the others.

Endgame A: ‘flatten the curve’

Endgame A is the plan to “flatten the curve” – restricting movements in order to lower the peak in cases, while accepting that infections will continue to grow until the epidemic has run its course. There will be many deaths.

Imperial College has demonstrated that even if Britain flattens the curve, the peak months would still overwhelm hospital intensive care capacity, (particularly ventilators) by eight times instead of 30, perhaps halving the ultimate death toll.

Australia is also likely to run out of intensive care capacity when there are about 45,000 infections – a small fraction of the population.

In reality, political economy will probably get in the way of continued growth of infections. Public pressure to “shut everything” will become overwhelming as infections rise and hospitals struggle. But by then, with exponential growth in infections from a greater base, the containment challenge will be much greater.

Once infection rates fall in response to the shutdown, there is a risk of public pressure to open again too early, increasing infections until the death rate again becomes unacceptable – what economist Tyler Cowen has dubbed the “epidemic yoyo”.

Whether that happens or not, flattening the curve will require us to suppress economic and social activity for at least 12 months, and possibly much longer. The economic – and social – cost will be enormous.

No matter how much money governments throw at the economy, most businesses cannot survive the absence of normal activity for more than a few months.

It is not just tourism and hospitality. Companies small and large across sectors from household services to manufacturing to construction, are developing and executing plans to sack hundreds of thousands of people.

A variant of Endgame A is to isolate everyone over 60 (the age group most at risk), infect as many younger people as possible, and then hope that the disease dies out.

It’s not really plausible. There would be continued pockets of infection in many places, and they would quickly turn into localised outbreaks, particularly in nursing homes. It would be very hard to keep everyone over 60 separate from the people who provide them with food and services (who are likely to get infected) for months.

And of course there will be some deaths among those under 60.

Endgame B: ‘trace and track’

Endgame B is to trace and track every infection, something governments are trying to do.

But as NSW has now discovered, with thousands of potentially infected people getting off planes every day, and little enforcement of voluntary isolation, it’s easy for untracked infection to take off, and then it becomes practically impossible for subsequent tracking to shut it down. It is too easy for the number of new infections to overwhelm the tracking system, and then we are back in Endgame A.

Endgame B is only plausible if you start with very few infections and have sealed borders. Tasmania is now in that world, but other Australian states are not.

Endgame C is to “stop then restart”. This means minimising activity and interactions, and sealing the borders to passenger traffic including citizens (although not trade), until infections are driven down to zero.

Only essential services would be maintained (particularly the food supply chain and utilities such as electricity, water and the internet).

There is no point trying to finesse which strategies work best; instead the imperative would be to implement as many as possible at once, including closing schools, universities, colleges, public transport and non-essential retail, and confining people to their homes as much as possible.

Police should visibly enforce the lockdown, and all confirmed cases should be housed in government-controlled facilities. This might seem unimaginable, but it is exactly what has already happened in China, South Korea and Italy.

Once infections are at zero, and stay there for a fortnight or so to ensure there are no asymptomatic cases, economic and social activity can restart sequentially, although international borders would have to remain closed to passenger traffic until there is a vaccine.

Governments would also need to implement widespread testing and tracking to identify and squash any recurrence (something the shutdown would give them time to set up and improve).

This will be much easier once we are not dealing with a continued flow of new infections from passenger traffic.

Some epidemiologists, such as those from Imperial College, dismiss this approach, saying renewed large outbreaks are “inevitable”. But that is only based on history and past measures to track and trace. Today’s have no precedent.

We don’t yet have China’s ability to track and trace. But in a national emergency, setting up systems to track people and their contacts using mobile data might be worth both the money and the invasion of privacy.

While some people would like to execute this strategy without shutting passenger borders hard and for a long time, it is not plausible.

Even today, almost half of Australia’s new cases are getting off planes, and every one of them increases the risks of recurrence. Mere voluntary isolation is nothing like safe enough.

An alternative might be to allow Australian citizens to enter, provided they go into enforced isolation in a quarantine station room – for which airport hotels could be repurposed.

China, South Korea and Tasmania are doing it.

In effect, Endgame C appears to be the strategy of China and South Korea – and domestically Tasmania is heading in the same direction.

Endgame C appears to be working so far in China, where the only new cases on Thursday were incoming passengers, each of whom is required to spend 14 days in supervised isolation in a designated hotel.

In Endgame C, it is plausible the shutdown would only need to last about eight weeks.

The mathematics of exponential growth also work in reverse: if the infection rate is below 1, instead of above 2 as it is now, then large numbers of cases turn into small numbers quickly.

China went from 4,000 new cases per day to 20 per day in six weeks with an infection rate that dropped below 0.5.

In Australia, if we achieved an infection rate of even 0.8, new infections per day would reduce from 100 to 10 in about six weeks, at which point track and trace becomes much more effective.

If Endgame C is the dominant strategy, it makes sense to implement it immediately and aggressively. The longer we wait, the longer that economic activity has to remain at a standstill to get back to zero cases.

Endgame C isn’t pretty. Until a vaccine is deployed – and we’re punting that there will be a vaccine – there will be no meaningful international travel, tourism or students for at least 12 months. But most of these those things won’t be happening under Endgames A or B either.

At least Endgame C would allow domestic travel and tourism, hospitality, and other domestic activity once the shutdown was over. If our major trading partner – China – also successfully executes the same strategy, our major exports might continue as well.

More importantly, if it is communicated clearly, Endgame C would give businesses a plausible end date.

They would have a reason to hang on if government intervenes to tide them over.

Psychologically, it would provide genuine hope. We should aim for eight weeks, and provision for twelve in case it is harder than we expect.

An eight to twelve week shutdown.

That relatively short duration would enable governments to intervene better to hold society and the economy together.

The government’s strategy would focus on providing a large social insurance policy that tides people and businesses over until the shutdown ends.

The goal would be to ensure we emerged out of the trough with human and physical capital and institutions in good shape. We need to avoid deskilling and demoralising workers and destroying businesses that will not be reborn easily.

This will require very large expenditure from government, which the government can afford if the shutdown is short enough.

Endgame C is not available to every country. The disease has already spread too far in Iran, and may have done so in the United States. It’s a difficult strategy for countries with big land borders with neighbours that let the disease run.

Australia can do it, though others cannot.

Australia has the advantage of being an island, with a major trading partner that seems to be adopting the same strategy. This time around, we might be the less unlucky country – if we can act quickly and decisively.

It’s possible that Endgame C might not work. Despite our best efforts, we might not be able to reduce infections, or the disease might recur when we think it has been eliminated.

But the costs of giving it a try are relatively low – in both lives and economic costs – compared with Endgame A.

In the worst case, it gives us more time to increase critical care capacity and prepare for Endgame A.

The logic is compelling: if we’re not going to pursue Endgame C (stop then restart), at the very least authorities ought to explain why it is not technically possible.

Each of the endgames are unpleasant. COVID-19 is the real-life “trolley problem” in which someone is asked to choose between killing a few or killing many.

When any of us are presented with the trolley problem, the all-but universal response is to refuse to choose.

That is what we are doing at the moment, and it will just make our problems worse.

We should recognise this psychology, and decide to choose the least-bad endgame.

The faster we do it, the less bad it will be.