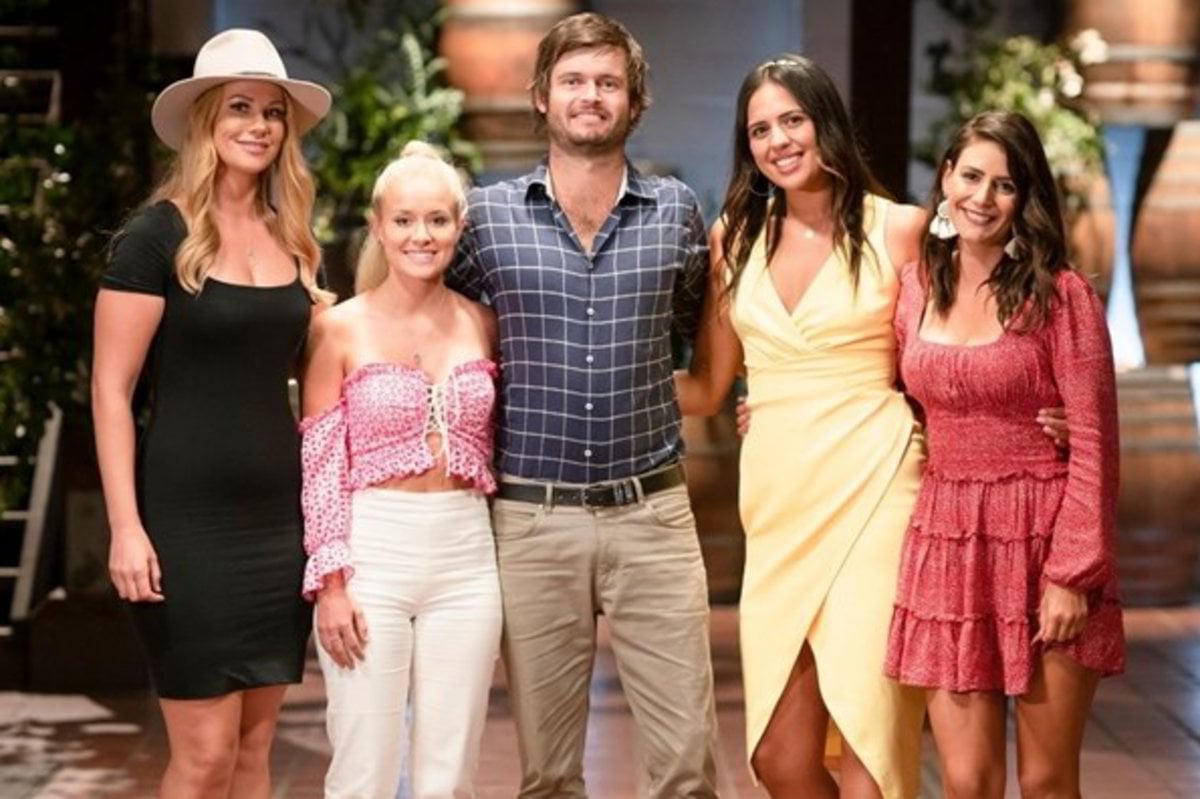 Farmer Wants A Wife has returned to our screens after four years, and as far as TV dating show success rates go, nine marriages and 20 Aussie babies born is, well, suspiciously good.

Could this mean we're in for a drama-free, wholesome show where contestants are really out to find love?

As we are approaching the end of this season of Farmer Wants a Wife, it appears producers have decided to bump up the drama just a tad which, on the bright side, means we have very important spoilers to talk about.

From a shock, Blake-Garvey style ending, to a group of contestants looking to leave the show, we've rounded up all the rumours about what you can expect from this season of Farmer Wants A Wife.

The contestants that begged producers to leave the show.

It's a wonder this hadn't happened sooner, really.

According to an on-set source, several women vying for farmer's hearts never formed the romantic connection they were looking for, and asked producers to leave early.

"The farmers were so spoilt for choice and I think they just wanted to be surrounded by women," a source told Woman's Day.

"They couldn't make up their minds, and in turn there wasn't enough time for every woman to spend time with each farmer, so what they were left with was a farmer who they didn't really know! They weren't happy."

And despite women confronting the Farmer's about "wasting their time," they still couldn't make a choice on who they would like to leave.

"Towards the end, women were coming to producers in droves asking to leave. They felt no sparks with the farmers and felt they were being greedy by keeping all the women there."

What Farmer Sam really thinks of the women fighting for him.

After hearing of his grandfather's death, Sam Reitano made the decision to quit his journey for love on Farmer Wants a Wife last night.

But it turns out, he didn't seem to form the connection he was looking for with the front runners, regardless.

Speaking to The Daily Telegraph, he said: "Look honestly, I feel like Riley [Parkinson] was the only one who was there for the right reasons."

"I just didn't feel like farm life was suited for Emily, Sophie and Kirsten." 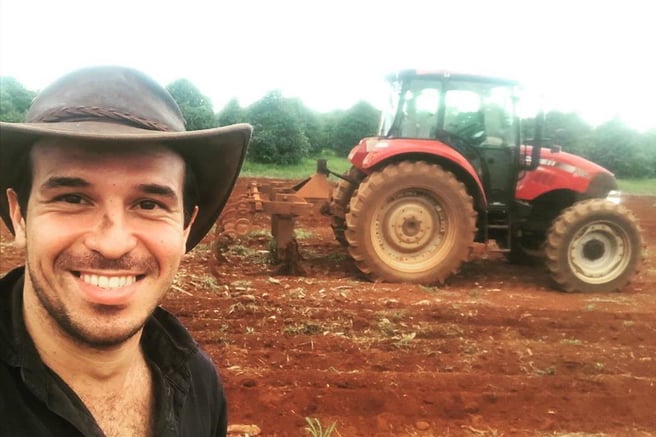 He recalled an incident from when the show began filming, that set off red flags for him.

"At the beginning of the show, Kirsten said she wasn't planning to leave her job anytime soon, and I thought to myself, 'It's Farmer Wants a Wife, not Farmer packs up his bags and heads to Newcastle.'"

As he said on the show last night, "I'm not giving up on love, but I have to put it aside. It's not forever, it's just temporary."

Does that mean we might see him again in the future? Let's hope so.﻿﻿

Host Natalie Gruzlewski is disappointed by the show's new look.

This season of Farmer Wants A Wife didn't live up to its previously wholesome reputation, and long-time host, Natalie Gruzlewski is reportedly on the verge of quitting.

According to New Idea, Natalie has been disappointed by the show's new style, likening it to Married at First Sight or The Bachelor.

"She expected it to be like the old days," an anonymous source said.

"She has even complained about the tone of the promos and publicity, which replicates Married at First Sight. But the trouble is the 'new' Farmer is a ratings hit due to the MAFS-style cast and content.”

Karlana said she was planning on leaving the show.

Last week, we watched as Karlana Alexander left the show after being accused of pursuing a romantic connection with a crew member.

Speaking to Woman's Day earlier today, Karlana said﻿ she was in "absolute shock" when she heard about the rumours.

"I still to this day don't understand how a harmless chat can get so twisted," she told the publication.

"I simply brought up the fact that the crew members were really supportive and easy to talk to. I mentioned one crew member in particular, and that was it. It was disappointing that Harry immediately assumed the worst of me.

Oh, and apparently she was planning to leave the show anyway, saying that her fellow contestants Ashleigh and Stacey shouldn't of viewed her as a threat.

"I can only assume that they were too focused on the 'competition' element," she says.

"But I was not a threat, and I was planning to leave as I just didn't feel a spark with Harry."

A farmer is on the dating apps

It looks like Farmer Nick won't be finding his happy ending if a dating profile is any indication...

A profile on the dating app, Bumble, of 44-year-old farmer Nick was captured and sent to Woman's Day last week, one fan even claims they've seen him on Tinder, too.

The picture shows Nick drinking wine in a vineyard, suggesting that he's moved on since the show was filmed.

A farmer has his eye on MAFS' Jessika Power.

At this point, we've come to terms with the fact that we just can't escape the contestants of season six of Married at First Sight.

Even on Farmer Wants A Wife.

Keen-eyed fans have noticed 29-year-old farmer Alex following 27-year-old Jess on Instagram for quite some time, and liking her steamiest of pics, of course.

Maybe he's just a fan after watching her on Married At First Sight, or maybe it's something more...

A farmer will pull a "Blake Garvey"

It looks like one of our five farmers will take a page out of The Bachelor handbook and pull a brutal dumping on the show's winner to return to his runner-up.

"My friend is on Farmer Wants A Wife. I know that she ends up with the guy. He ends up cheating on her at the end - and then he ends up going to the other girl that he didn't choose!" they said.

At this stage, the identity of the farmer remains a mystery. But we'll start taking bets now, thank you.

The Farmers have each chosen 4 ladies to join them back on their farms. 💖 Are they a step closer to finding the one? #FarmerAU

A farmer that wants to quit

Going from a small town man to reality TV star overnight is bound to give farmers a shock to the system.

So much so, that at one point, Farmer Harry looked at leaving the show altogether.

In an interview with Woman's Day, an anonymous contestant claimed that the behind-the-scenes drama was all too much for Harry, saying that at one point, he was very close to walking.

"(He) was faced with a stream of drama and meddling producers. It's not all about romance – they're obviously there to make a show," they said.

"Things became so heated he wanted out. It's one thing to maybe find a wife but the pressure that comes with the process was too much.

"To be honest, I don't think he realised how hard breaking hearts and dealing with feelings would be... he was absolutely ready to walk!"

To add to the theories, Harry was spotted at the show's launch party in Sydney earlier this month looking rather downcast in contrast to the other farmers.

A farmer that didn't make it to air

Fans were quick to notice a particular farmer missing from the show's premiere, despite being promoted on Instagram months earlier.

Jack Beaton from the Wimmera region of Western Victoria was set to star on the reality program and quickly became a favourite due to his promo that featured four labradors and a very cute puppy.

Dog lovers, may we introduce you to the man of your dreams? 🐶❤️ This is Farmer Jack. Apply now - link in bio 👨🏽‍🌾 #FarmerWantsAWife

After fans were quick to point out the missing farmer, Channel Seven responded, sharing the reason he didn't appear with Now To Love.

"It's common practice for productions to have back-up cast members for many reasons," the spokeswoman said.

"Farmer Wants A Wife has had back-up Farmers since the first season. If Farmer Jack's situation remains the same, he will most definitely be considered when casting future seasons."

To add to the drama, contestant Stacey Kain - who is competing for Farmer Harry's heart - revealed to Woman's Day, she had a past with Jack.

"I went to high school with him," she said, adding that the two were still in contact.

This sparked rumours that she applied with hopes of reconnecting with Jack, rather than farmer Harry.

We just want him, and his dogs back, please.

Catch up on all the drama with our Farmer Wants A Wife recaps:

Mamamia recaps Farmer Wants A Wife Episode 7: A farmer leaves after his heart is broken into "pieces".