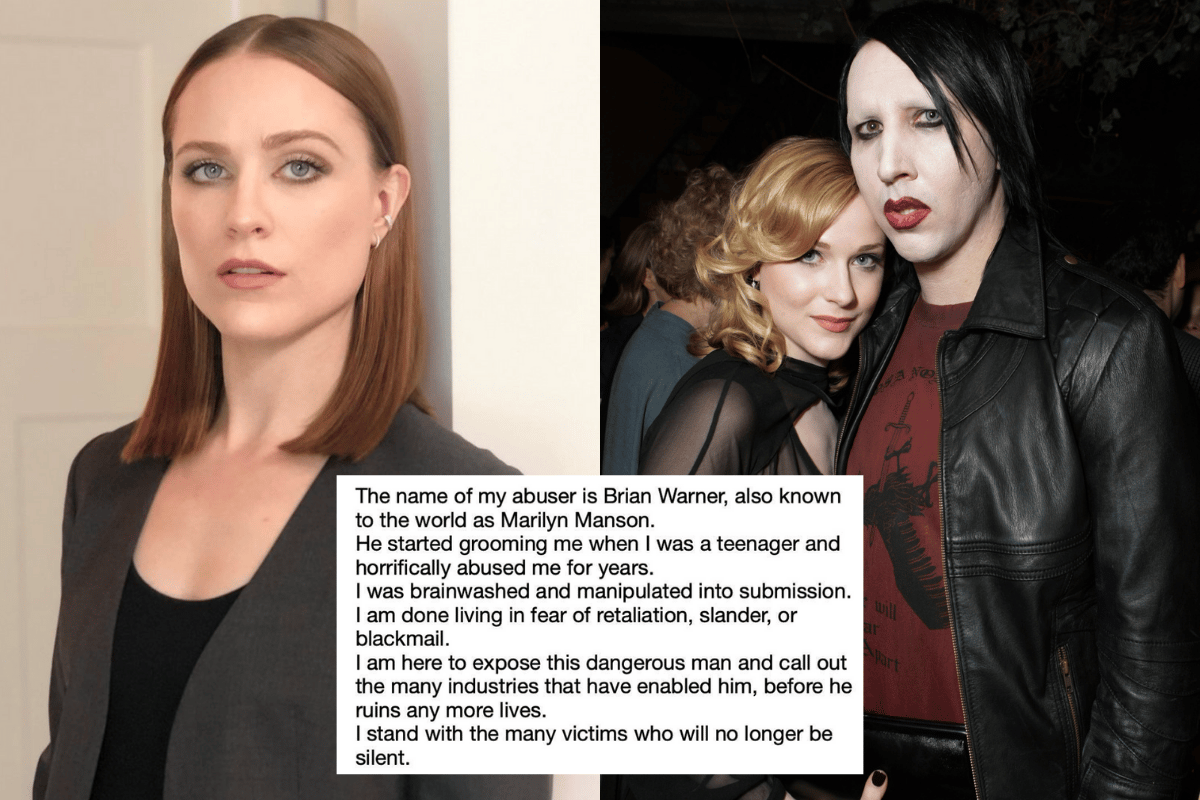 This post deals with domestic violence, sexual abuse and suicide and might be triggering for some readers.

Evan Rachel Wood is a passionate advocate for domestic violence survivors and has been using her platform to call for change for many years.

Only recently has she revealed who her alleged abuser was.

In February 2021, Wood named her former fiancé and singer Marilyn Manson as her abuser a decade after she alleged he subjected her to "horrific abuse". She is not the first woman to level serious allegations against Manson.

She inspired his 2007 song 'Heart-Shaped Glasses', and appeared in the video, making out with him as fake blood rained down on them both.

Now aged 34, Wood shared on her Instagram last year: "The name of my abuser is Brian Warner, also known to the world as Marilyn Manson."

She continued: "He started grooming me when I was a teenager and horrifically abused me for years. I was brainwashed and manipulated into submission. I am done living in fear of retaliation, slander or blackmail. I am here to expose this dangerous man and call out the many industries that have enabled him before he ruins any more lives," she wrote. 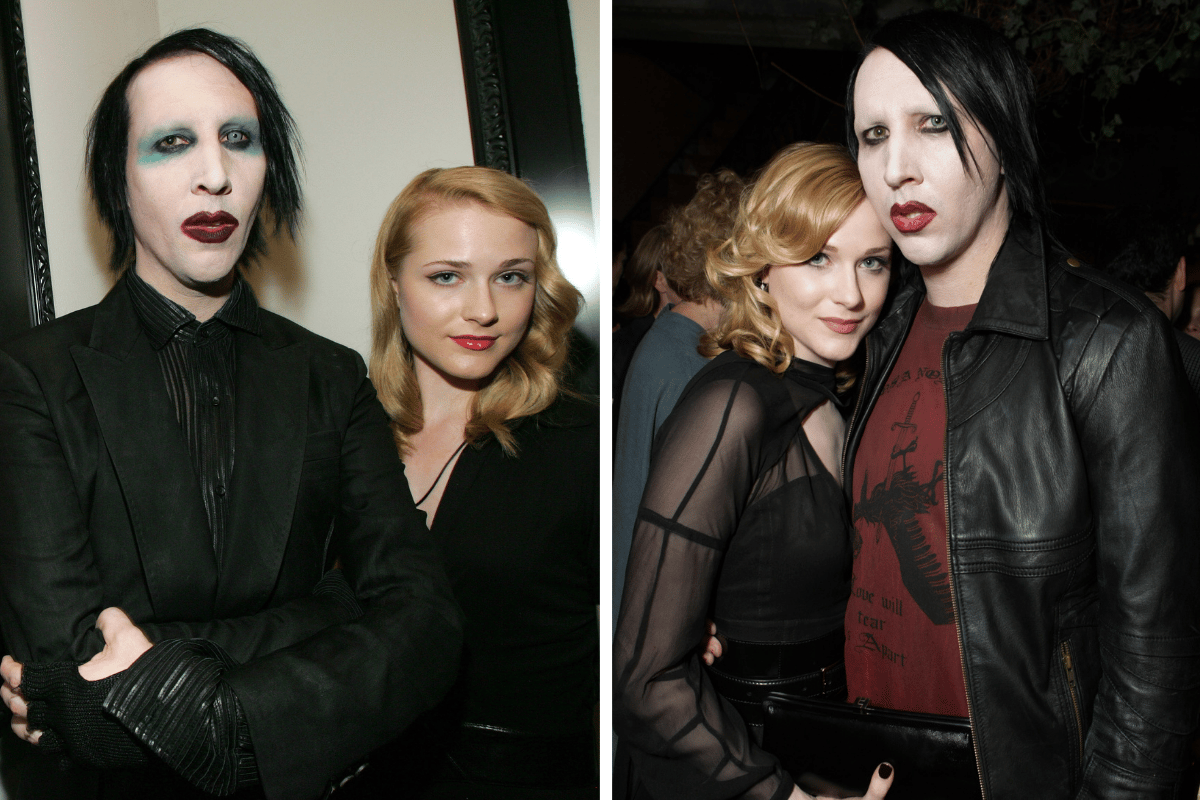 The former couple in 2007. Image: Getty. Wood had spoken publicly about being a survivor of rape and domestic abuse, although she had never named Manson until 2021. In 2016 she spoke about a suicide attempt at the age of 22, after spending her early 20s being subjected to "physical, psychological, sexual" abuse.

"[It] was, weirdly, the best-worst thing that ever happened to me. Cause it did not work. I am still standing. I am alive. I am happy. I am strong. But I am still not okay," she told Rolling Stone.

This week, Wood shared for the first time that in 2011, she discovered she was pregnant with the baby of Manson.

"From the beginning of our relationship, he always had an issue with whatever birth control I was using — and I went through, like, every type to see which one he liked, and he didn’t like any of them, so essentially he didn’t want me using birth control," Wood said in part two of the HBO docuseries Phoenix Rising.

In the docuseries, Wood said Manson refused to wear a condom during their time together. After deciding to terminate the pregnancy, Wood said Manson demanded she cook him dinner straight after she came home from the abortion.

"He flew out for the abortion. The second it was over it was like, 'Make me dinner.' And I remember being like, 'I'm supposed to be resting, my body has gone through this trauma… there's aftermath here.' And he didn't care."

The ordeal left Wood suicidal, and she tried to take her own life.

Phoenix Rising premiered at the 2022 Sundance film festival and immediately made headlines.

In the first instalment of the docuseries, Wood alleged Manson had raped her on the set of the music video of 'Heart-Shaped Glasses'.

During the documentary, Wood said that during a previously discussed "simulated sex scene", Manson "started penetrating me for real" once the cameras were rolling. Wood said she was fed absinthe on the set and was barely conscious to object to Manson's alleged actions.

"I had never agreed to that. It was complete chaos, and I did not feel safe. No one was looking after me. [The crew] was very uncomfortable and nobody knew what to do."

She continued: "I was coerced into a commercial sex act under false pretences. That's when the first crime was committed against me and I was essentially raped on camera. But I was scared to do anything that would upset Brian in any way. The video was just the beginning of the violence that would keep escalating over the course of the relationship."

In the wake of the attacks, Wood was diagnosed with post-traumatic stress disorder (PTSD).

"My experience with domestic violence was this: toxic mental, physical and sexual abuse which started slow but escalated over time, including threats against my life, severe gaslighting and brainwashing, waking up to the man that claimed to love me raping what he believed to be my unconscious body," she said.

Wood went on to say Manson "made threats against my life, sometimes with deadly weapons", alleging that he also tortured and starved her, monitored her phone usage and threatened her with blackmail.

This week, it was revealed that Manson is suing Wood for defamation and intentional infliction of emotional distress, with the lawsuit alleging that Wood’s allegations were fabricated.

In an Instagram post last year, Wood also shared the testimonies of four more women who accused Manson of horrifying physical and emotional abuse, including torture.

"He was very skilled at gaslighting his inner circle," she shared on Instagram.

"I'd witness him inflict his psychological abuse on everyone he employed, everyone he dated. He would dictate the perimeters of our reality. Horrifying, deranged behaviour and insane scenarios became normalised. He was extremely interested in mind control, torture tactics and spy devices to gather information for blackmailing and manipulation."

We commend Ashley Walters' courage in coming fwd about the assaults & abuse she endured while working as Marilyn Manson's assistant. The fear of judgment + retaliation can be paralyzing esp. when the accused is in a position of fame + power. #TIMESUPLDFhttps://t.co/twVgU1xna8

Another woman, model Sarah McNeilly, said that she suffered from PTSD following her relationship with the musician.

"I was emotionally abused, terrorised and scarred," she shared. "I was locked in rooms when I was 'bad', sometimes forced to listen to him entertaining other women. [I was] kept away from certain friends or if I didn’t, he would threaten to come after them. I was told stories of others who tried to tell their story and their pets ended up dead."

"He would tie me up for the first of many times and rape me. I sobbed on the floor in the hotel and when I looked at him, he was smiling," she said in a statement.

"He told me I wasn't allowed to wear pants. He would throw objects at me like glass. He could cut me during sex. He called me crazy. He called me autistic. He would make fun of my race. He destroyed my belongings."

In light of the allegations, singer Phoebe Bridgers shared her own experience with Manson on Twitter, adding that she had visited Manson's home with some friends when she was a teenager.

I went to Marilyn Manson’s house when I was a teenager with some friends. I was a big fan. He referred to a room in his house as the “r*pe room”, I thought it was just his horrible frat boy sense of humor. I stopped being a fan.

I stand with everyone who came forward.

"I stand with everyone who came forward," she continued.

Afterwards, the Bridgers alleged that Manson's associates knew about the alleged abuse.

"The label knew, management knew, the band knew. Distancing themselves now, pretending to be shocked and horrified is f**king pathetic," she alleged.

In the new documentary, "Phoenix Rising," Evan Rachel Wood holds Marilyn Manson accountable for the abuse she endured during their relationship and says "this isn't about revenge" https://t.co/eNTWJWUtbD

"Obviously, my art and my life have long been magnets for controversy, but these recent claims about me are horrible distortions of reality," he wrote in an Instagram post.

Listen to Mamamia Out Loud: On this episode, the ladies talk about the horrifying allegations against Marilyn Manson. Post continues after podcast.

Among the public, however, the allegations against Manson didn't exactly come as a surprise.

In fact, Manson's alleged behaviour had been hiding in plain sight for years.

In December 2001, Manson was faced with an assault and sexual misconduct charge.

In April 2002, he was also hit with a wrongful death lawsuit, the mother of the deceased alleging Manson gave her late daughter drugs and encouraged her to "drive while inebriated".

In June 2009 while promoting his music, Manson said in an interview with Spin, that one of his songs was about "fantasies" he had "every day about smashing her skull in with a sledgehammer". He was referencing Evan Rachel Wood.

Amid the serious sexual assault allegations, Manson is now facing up to four lawsuits accusing him of sexual assault, battery and harassment as well as an investigation into allegations of domestic violence incidents by the Los Angeles County sheriff's department. Manson was also dropped by his record label, Loma Vista.

Wood has since become an incredibly vocal advocate for domestic violence survivors.

In 2018, Wood appeared before the US House Judiciary Committee amid a campaign for the 2016 Survivors’ Bill of Rights Act to be enacted across the US. In 2019 she also testified to the California Senate Public Safety Committee in support of a bill expanding the rights of victims of domestic violence.