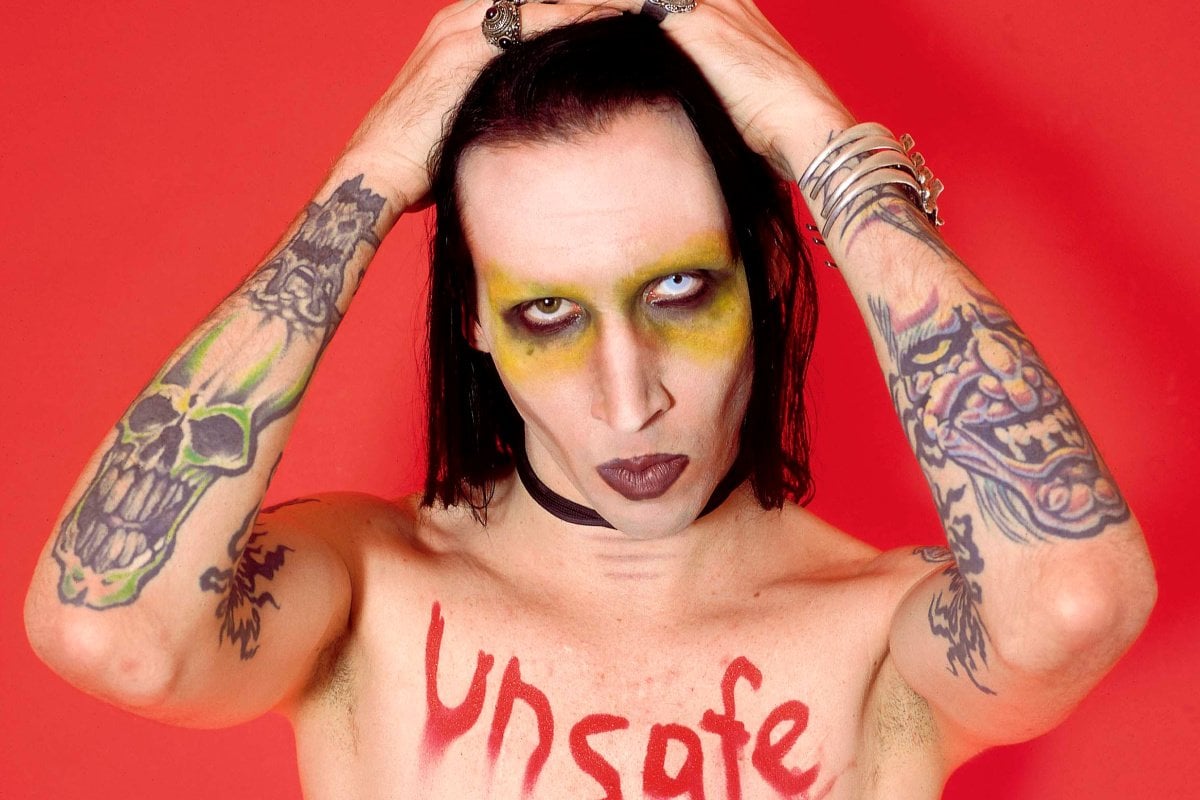 Marilyn Manson has always told us who he is.

We've known for decades that he was an abuser of women, and that he devised a plot to murder his ex-girlfriend.

Manson told us so, in his 1998 autobiography, The Long Hard Road Out of Hell.

Despite the harrowing details in that book, it's taken two decades and the combined efforts of five women and their coordinated Instagram statements in February 2021, for Manson to be widely denounced and dropped by his record label.

Actress Evan Rachel Wood led the charge last Monday, releasing sickening details of the "horrific abuse" she says he subjected her to for years.

Watch: Evan has spoken about being abused before. But in 2021 she named Manson. Post continues after video.

Wood then shared the testimonies of four more women who accused Manson of horrifying physical and emotional abuse, including torture.

In 2009 in an interview with Spin Magazine, Manson said he called Wood 157 times in one day and had "fantasies every day about smashing her skull in with a sledgehammer."

But last week, he said that the allegations detailed in 2021 by Wood and the four other women are "horrible distortions of reality."

But if we rewind 23 years, Manson's own 1998 words detail disturbing abuse that largely went unchecked and undenounced by the brands, music industry and fans that have kept his estimated $10 million career afloat.

According to a critique by the Chicago Reader, Manson's autobiography talks of "generally mistreating one or more women per page."

Here are just four of the most disturbing stories:

He nearly committed the "perfect murder."

"This was the first time I had ever seriously considered murder.… She had to die," wrote the rocker, whose real name is Brian Warner, in his 1998 autobiography.

He was talking about his former bandmate and lover Nancy, who he claimed "screamed, cried and threatened him," once he tried to end things with her.

"At the time, taking someone’s life seemed like a necessary growing and learning experience, like losing your virginity or having a child." 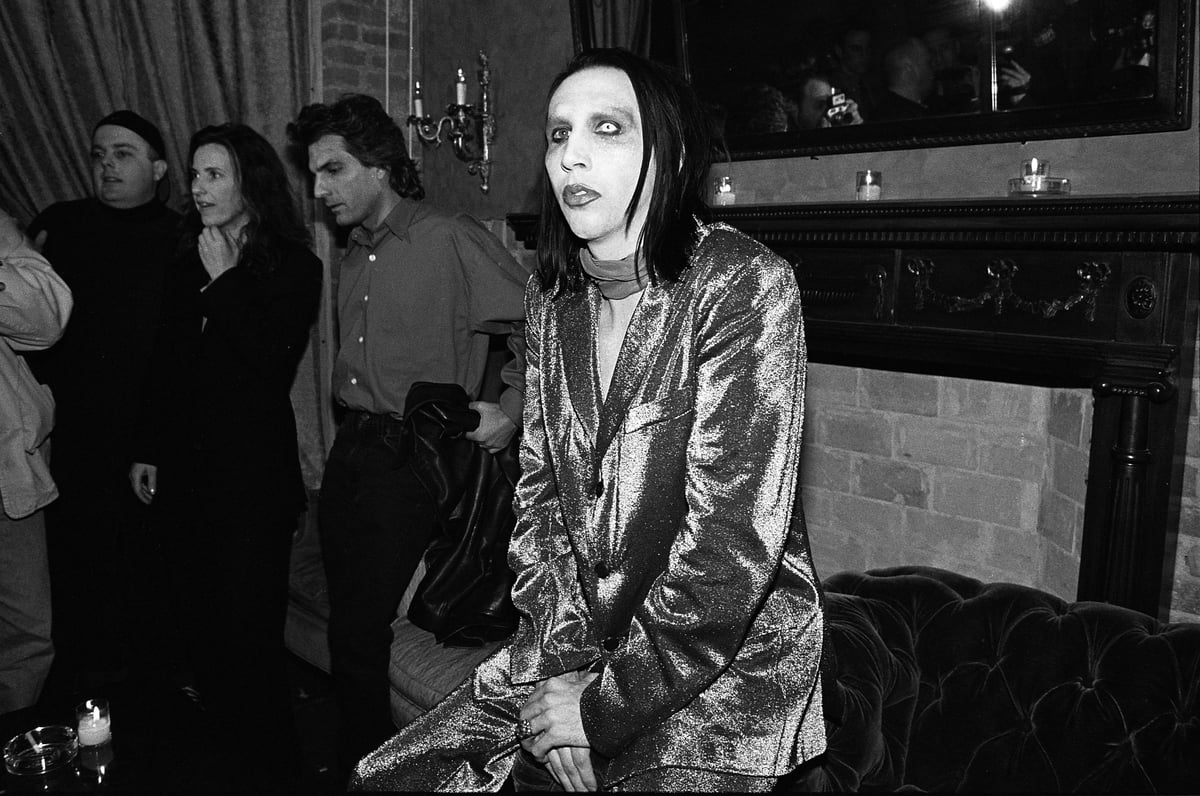 Manson pictured at the February 1998 party celebrating the release of his autobiography The Long Hard Road Out of Hell. Image: Catherine McGann/Getty.

Manson wrote about following Nancy, casing her house and "figuring out" her routine before heading back to her property with "kerosene, matches and rags".

As he approached, with a friend who he'd roped into the plot, he talks about being spooked by a homeless man who followed them - trying to sell them drugs.

"After that night, I became too paranoid to kill Nancy, too scared of getting caught and sent to prison," he wrote. "I woke up to the fact that I had told too many people of my hatred for her, and even the best plan … wasn’t good enough to protect us from chance events like passing police cars."

While he eventually decided against killing her, he writes that a few years later he ran into her at a club and, "the old hatred welled up again, and I wanted to do something heinous and more permanent to her, but I couldn’t find out where she lived."

He admitted to harassing a woman he didn't know with rape threats.

In the book, Manson recalls a story about how he and a friend had a crush on a "hot brunette" who "wouldn’t even acknowledge our humanity".

"I fell back on my usual deviant way of getting a girl’s attention: malicious, asinine behaviour," he wrote.

Manson admits he called the woman every day for nearly a month and "at first, the calls were harmless. But they quickly grew meaner."

"‘We’re watching you,’ we’d threaten her at the height of our spite-masked lust. ‘You better not leave work tonight, because we’re going to rape you in the parking lot and then crush you underneath your own car,’” he wrote of their escalating threats to the woman.

He talks about sexually assaulting a drunk woman.

Manson details a "trick" that he, at the point of writing his autobiography, had become quite famous for he said.

Manson details getting two women drunk in this manner with a friend, and goes on to refer to the women as a "porpoise fish woman" and a "water behemoth."

"Trent and I take this sea bass back into his living room. The other girl has since passed out and was hopefully drowning in her vomit," he writes.

"We blindfolded the sea creature.....A Ween album was playing, "Push the little daises and make em come up..." as me and the young Trent Reznor poked out fingers into the birth cavity of a bizarre fish lady in search of some sort of caviar."

"We knew we must continue with our debasement of this poor unsuspecting person. So I found a cigarette lighter and I started to burn her pubic hair," he continues further down the paragraph.

[CONTENT WARNING: SEXUAL ASSAULT] Since this is going around: In the story, Reznor and Manson try to make two women pass out. One passes out. The other is conscious, but still got the full glass of tequila; they tie her up and blindfold her before doing the above stuff. pic.twitter.com/wKE7dQ1lsR

Reznor has released a statement as this excerpt is re-examined through a 2021 lense which reads, "As I said at the time, the passage from Manson's memoir is a complete fabrication. I was infuriated and offended back when it came out, and remain so today."

He invited a deaf groupie to his recording studio, where he made her strip naked and covered her in raw meat.

Manson shares a story in his autobiography about inviting a deaf groupie back to his band's recording studio.

Detailing the incident in a chapter titled 'Meat and Greet', Manson explained: "I immediately realised that she was deaf because of the way her voice sounded. She told me that she could feel the music when she's close to the stage and that's how she gets her enjoyment from it."

When Alyssa arrived, Manson asked her to take off all her clothes, before he and his bandmates covered her naked body in raw meat.

"At this point, I didn't think it was very sexual. It was more of a living meat sculpture," he said.

Manson then describes how he asked two of his bandmates to "scotch tape" their penises together to see if Alyssa could "fit them both in her mouth."

One of the band mates then had sex with her, before the group urinated on her in the shower.

Manson insists Alyssa consented to the sex acts, but wrote of the experience: "We were all shocked and amazed that we were commanding that much sexual power and that there was a naked deaf girl in the studio."