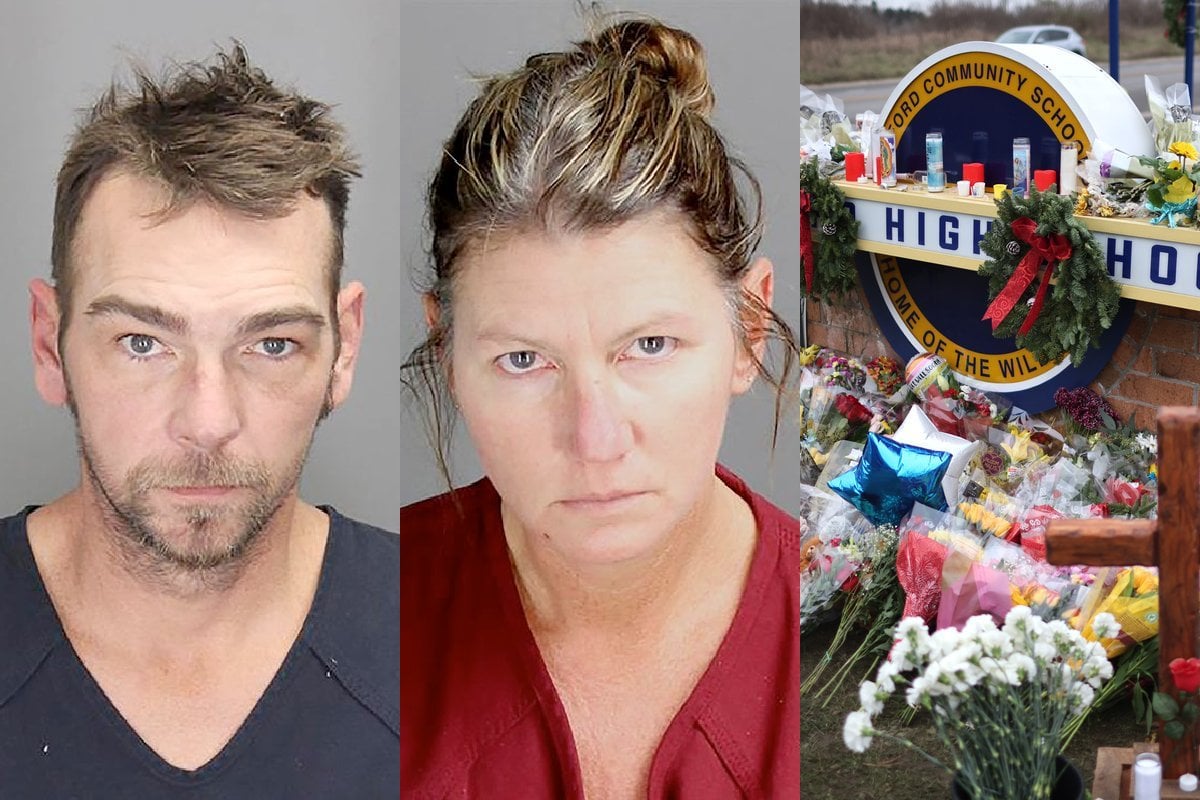 This post deals with school shootings and could be triggering for some readers.

Just like the millions of eager shoppers across the globe, Jennifer and James Crumbley went to their local shopping precinct for the Black Friday sales last month.

But unlike most parents, the Crumbleys decided to purchase a gun for their 15-year-old son.

Only days later was their son, Ethan Crumbley, charged with murder and terrorism for enacting a school shooting, injuring seven people and killing four students.

Jennifer and James Crumbley have now been charged with involuntary manslaughter.

It is not unprecedented but is still incredibly rare for a parent/guardian to be charged in relation to their child's crimes in the US.

It was lunchtime on November 30, 2021 at Oxford High School in the US state of Michigan when Ethan Crumbley emerged from the boys' bathroom brandishing a gun that was previously in his backpack.

He began roaming the halls and allegedly shooting randomly at students with no specific targets.

When police arrived at the school, after being flooded with more than 100 calls to 911 dispatchers, they arrested Ethan in a hallway.

He put his hands in the air as the police approached, the Oakland County Sheriff said.

Ethan was carrying seven additional rounds of ammo when he surrendered.

The charges against Ethan Crumbley. 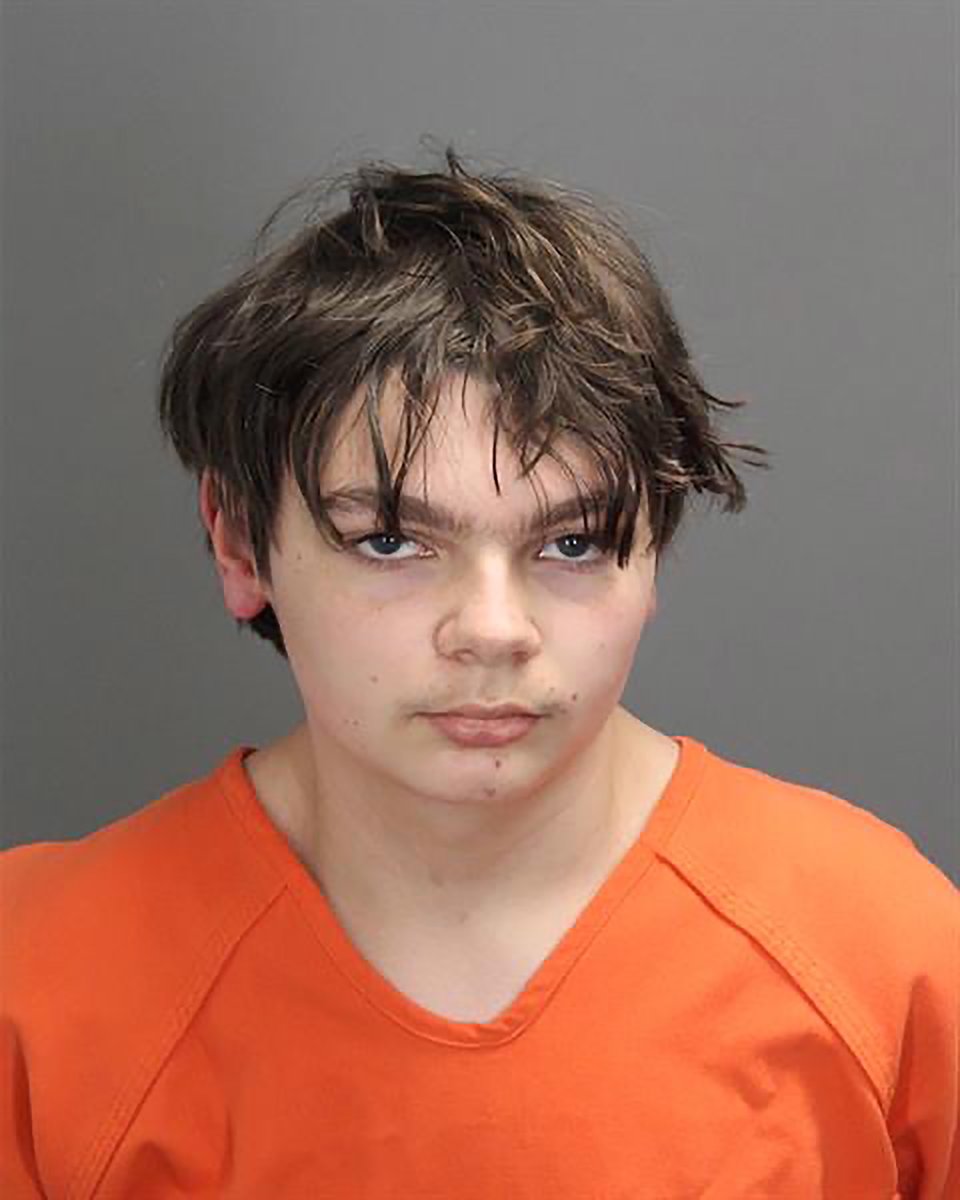 The 15-year-old boy this week was charged with murder and terrorism.

The night before the shooting, the Oakland County Sheriff said Ethan recorded a video in which he discussed shooting and killing students. What prosecutors hope to prove by this finding from the Sheriff's department is that Ethan's killing spree was allegedly premeditated.

"There is a mountain of digital evidence collected by police. This was not just an impulsive act," the prosecutor said.

Among the evidence includes a social post from Ethan which reads, 'Now I am become death, the destroyer of worlds. See you tomorrow Oxford.' Ethan also commented on a YouTube video of a gun being fired on a shooting range, the gun the same make and model as his own, writing 'this is the gun I'm going to use' along with a smiley face.

In a major move, Ethan will be charged and trialled as an adult, arraigned on the charges of murder, attempted murder, terrorism causing death and gun crimes.

The shooting should be a wake-up call for new gun laws in a country that has become "desensitised to school shootings", the prosecutor told reporters.

The victims of the Michigan school shooting.

Four people have died following the school shooting. They were all students under the age of 18.

Eight people were wounded, some critically, including a 14-year-old girl who was placed on a ventilator after surgery.

A teacher who received a graze wound to the shoulder has since left hospital but seven students ranging in age from 14 to 17 remained hospitalised through the night with gunshot wounds. 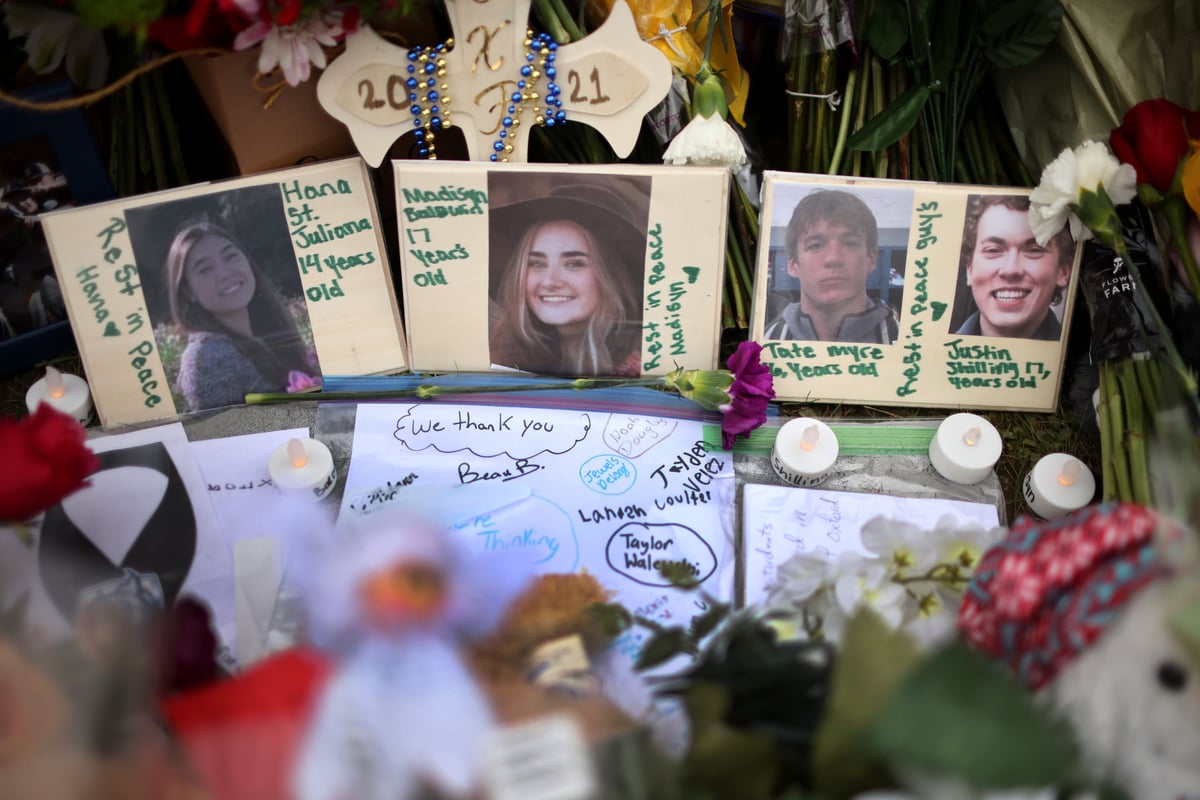 Tate was a football player and honour student. Posts shared online suggest Tate attempted to disarm the shooter and save other students. His football coach wrote on Twitter: "It's hard to put into words what he meant to me, but he will hold a special place in my heart forever."

Hana was the youngest victim, described by a close friend as "kind and genuine to her core."

Madisyn was a promising student who loved to "draw, read and write. She was very artsy, very smart, very intelligent, who was going very far in this world," her aunty told WXYZ News.

Justin, who succumbed to his injuries in hospital, was the co-captain of the school's bowling team and a senior in high school.

The school's website reads, "As we grapple with the horrific tragedy in our school community, we grieve the students who lost their lives and we ache for all those who have been injured and impacted."

The Oakland County Sheriff tweeted that his "heart aches for families that will never be the same and a quiet sweet community that had its innocence shattered."

The accusations against Jennifer and James, Ethan Crumbley's parents.

Under Michigan law, the involuntary manslaughter charges filed against the parents can be pursued if authorities believe someone contributed to a situation where there was a high chance of harm or death.

It is highly unusual for parents in the US to be charged in school shootings involving their children, even if most minors get guns from a parent or relative's house.

So, for a parent and/or guardian to be charged in relation to their child's crimes the case against them needs to be substantial. Prosecutors believe this is the case for the Crumbleys. 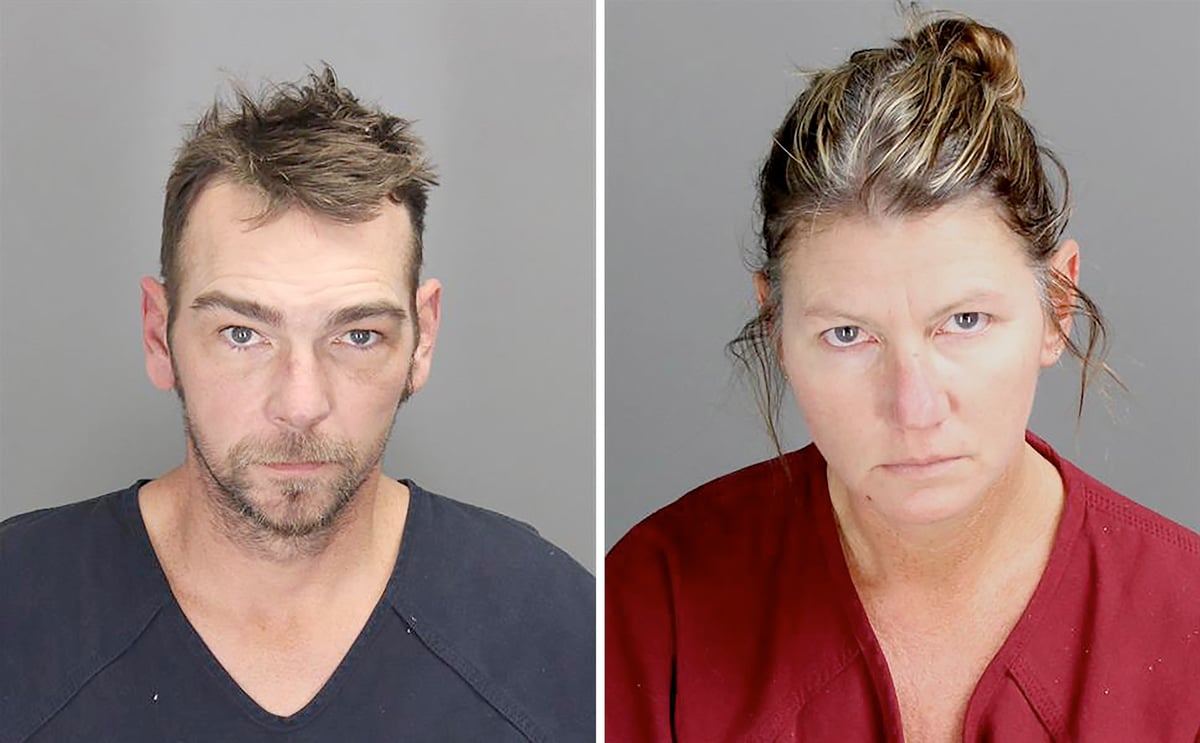 On Tuesday morning, a teacher from Oxford High School found a note on Ethan's desk and took a photo of it. The note showed a drawing of a gun pointing at the words: 'The thoughts won't stop. Help me.'

Also on the note was a drawing of a bullet, with the words above: 'Blood everywhere', the teacher says.

Obviously concerned, the teacher flagged this with the school board who immediately set up a meeting with Ethan and his parents Jennifer and James. The parents were told to put their son in counselling within 48 hours.

Listen to Mamamia's Tell Me It's Going To Be OK: Amelia Lester explains why US gun laws remain unchanged, despite massacre after massacre. Post continues after audio.

The prosecutor says the Crumbleys then failed to ask their son about the gun or check his backpack and "resisted the idea of their son leaving the school at that time".

"The notion that a parent could read those words and also know that their son had access to a deadly weapon that they gave him is unconscionable - it's criminal," the prosecutor said.

As we now sadly know, hours later Ethan returned to class only for the shooting to occur.

The Crumbleys go into hiding.

On December 3, authorities announced they were searching for the couple, who had gone missing.

US Marshals announced a reward of up to AU$14,282 each for any information leading to their arrests.

It was only later at night, Jennifer and James were caught hiding in a Detroit commercial building, the couple aided by another individual who may also face charges for perverting justice.

The Crumbleys are charged and plead not guilty.

Late Friday, the prosecutors filed involuntary manslaughter charges against the Crumbleys. The charges were filed only hours after police located the pair.

The couple entered not guilty pleas to each of the four involuntary manslaughter counts against them during a hearing held on Zoom.

The parents of the Oxford High School shooter, James and Jennifer Crumbley, now charged with four counts each of involuntary manslaughter. They appeared at their son’s arraignment in hoodies and caps on Zoom. For their next arraignment, they’ll be in orange jumpsuits. pic.twitter.com/gTy5oUr8MP

The judge agreed with prosecutors that both Jennifer and James posed a flight risk, the pair now fitted with GPS monitors.

Defence lawyers said the Crumbleys never intended to flee and planned to turn themselves in on Saturday morning. They accused prosecutors of "cherry picking" facts to publicly release and said their clients were terrified and only wanted time to make arrangements.

"Our clients are just as devastated as everyone else," lawyer Shannon Smith said. 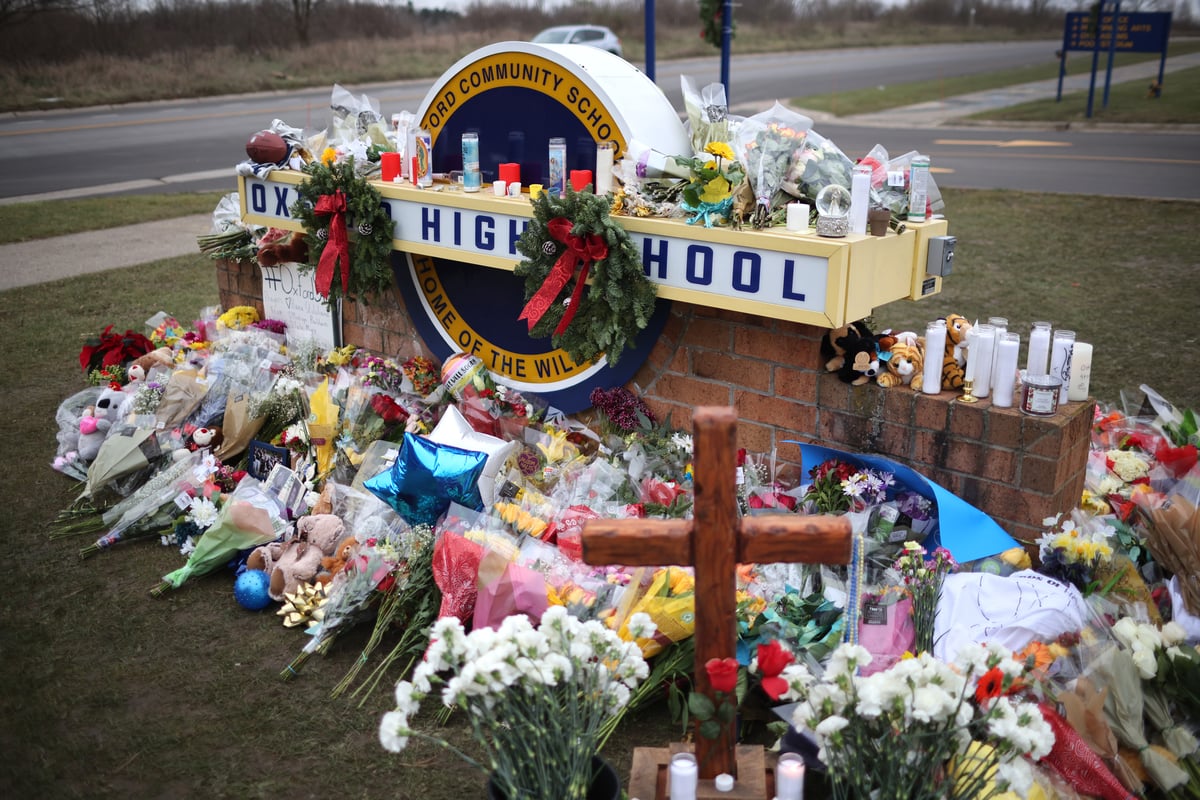 In 2021, research shows there has been (so far) at least 144 incidents of gunfire on school grounds in the US.

This has resulted in the deaths of 28 people, and injured 86 others.

As is noted every time a horrific school shooting is reported on: if gun laws don't change now, when will they ever?

gu3st a month ago
Reply
Upvote
2 upvotes
Life is surprisingly cheap in the US, for a country that can afford to do much better.
This disregard is starkest in a few areas; American's complacency/militancy around healthcare. The callous, indifferent incompetence of the US COVID response, particularly amongst their political class, where it became apparent that political influence, or winning votes, have far more currency than American lives.
And here, where what is, basically, a sport or hobby, is artificially elevated to a fundamental human right, which transcends Americans' right to safety. Or, life, it seems.
E
essie a month ago
Reply
Upvote
2 upvotes
Absolutely horrific tragedy. Americans’ “right to bear arms” should not apply to weapons with such power. If holding parents accountable is the way forward to help prevent more shootings then that has to be a positive. Doesn’t bring back the innocent lives lost nor erase the memories of such scenes.
News
General
Opinion
True Crime
Politics
Sport
Explainer
Entertainment
Celebrity
Reality TV
Movies
TV
Books
Rogue
Royal
Lifestyle
Beauty
Fashion
Weddings
Home
Wellness
Health
Fitness
Travel
Food
Parents
Before The Bump
Pregnancy
Baby
Kids
Teens
School
Parent Opinion
Work & Money
Money
Finance
Career
Lady Startup
Relationships
Sex
Dating
Separation
Friendship
Family
Real Life
Couples