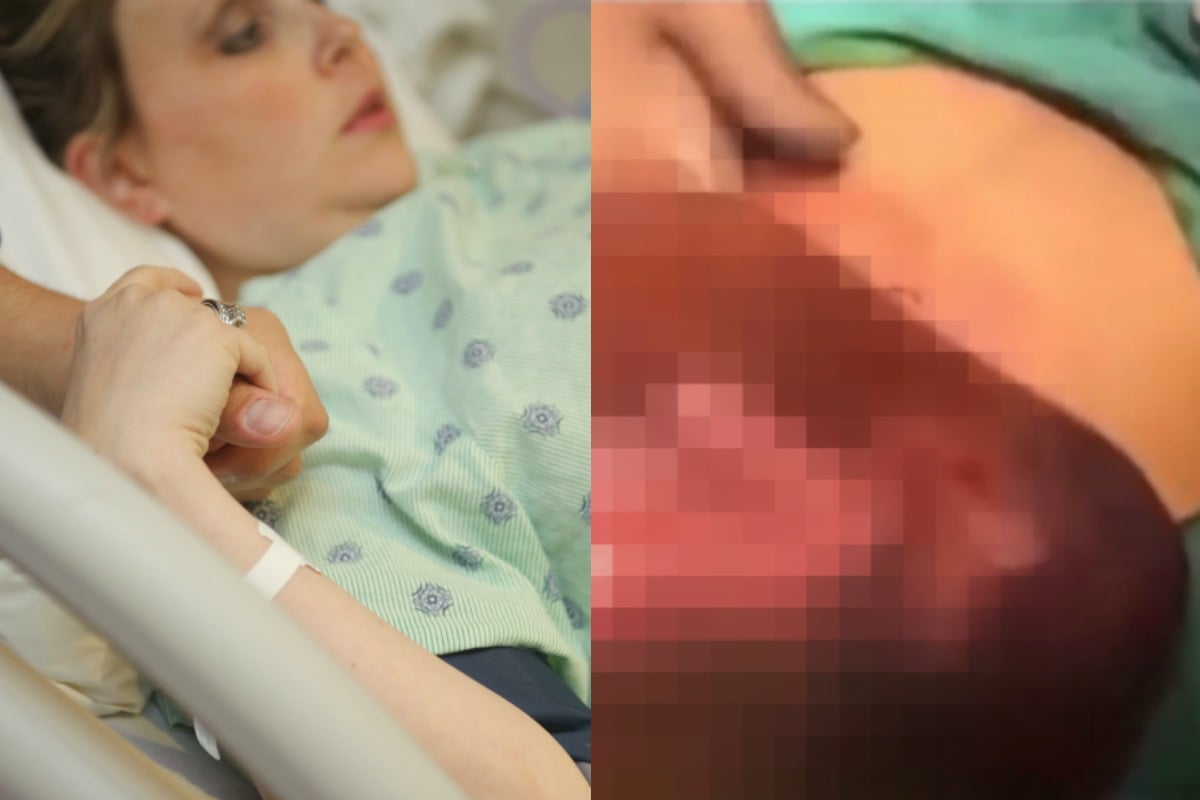 Many of us know that when a pregnant woman’s ‘waters break’, it’s a sign that she’s ready to deliver her baby.

Those ‘waters’ come from the nutrient-rich amniotic sac (that the baby’s been living in) bursting.

But there are some very rare births where the amniotic sac does not burst at all… and a baby is born within the sac.

It’s called an ‘en caul’ birth. Approximately one in every 80,000 – 90,000 babies will be born en caul, a type of birth so rare that many midwives and obstetricians will go their entire career without seeing one.

This week, The Midwife Mumma, Amelia Lamont, posted a video of an en caul baby, showing it wriggling around in its amniotic sac, outside of its mum, resting on her torso.

✨No one is sure where this video originated from or the gestation of this baby but far out how incredible is this?? A clearly premature or growth restricted Bub being born via Caesarian section still encapsulated in its caul (amniotic sac) — Very rare but this obstetrician obviously gave these parents a beautiful calm Caesarian section.. unbelievable seeing the fluid, space and movements bub has in its little home for so long .. love love love.

Lamont explains in her post that she’s not aware of the origin of the video, but even as an experienced midwife, she’s amazed to see the vision.

“Far out how incredible is this?

“A clearly premature or growth-restricted bub being born via Caesarian section still encapsulated in its caul (amniotic sac).

“Very rare but this obstetrician obviously gave these parents a beautiful calm Caesarian section…unbelievable seeing the fluid, space and movements bub has in its little home for so long.”

Seeing an en caul birth provides a startling, and rare, real-life view of how the baby has been living whilst in utero.

As Lamont explains, given the position of the sac, the mother’s obstetrician had performed a Caesarean section delivery.

But it is also possible to see an en caul delivery via the vagina.

Midwifery advisor for the professional practice unit of the Australian College of Midwives, Dr Megan Cooper, has been present at a vaginal en caul birth.

“It really was amazing to see,” Dr Cooper told Mamamia.

“The baby was full-term, the labour was spontaneous, and the amniotic sac came through the mum’s vagina during the birth. The membranes were then ruptured after the whole baby had been birthed.”

Dr Cooper says she’s only seen one in her career, adding that en caul births have become rarer since there is now more intervention by breaking of membranes (the sac) to help facilitate labour.

Looking at the video, Dr Cooper suggested that the mother may have requested that the membranes stay intact; because during a Caesarean, they are usually ruptured.

Monique Bowley and Bec Judd chat to Midwife Cath Curtin about different types of births and answer all your questions about the big day. Post continues after podcast.

In 2016, Jessica Antoniadis told Mamamia the story of her second child Peter’s birth, which had been en caul – much to everyone’s surprise.

“We thought my waters had broken because I had a little bit of a trickle down my leg,” Jessica recalled.

“But when he was crowning my midwife and doula were like, ‘Whoa. Hold on. Hang on. He’s still in the sac.’

“They were telling me, ‘Don’t push!’ and I was saying, ‘I’m not pushing. My body’s just getting him out!’ And they were saying, ‘No, just hold him there’.”

The midwife and doula were very excited about the rare experience, but because of her delivery position, Jessica didn’t get to see Peter in his sac at the time – only later, thanks to photos.

But she will always remember Peter’s very special birth.

Historically, en caul births have been considered auspicious – perhaps because of their rarity. Some cultures have believed because the baby was born in fluid, it will be immune to drowning.

That is very cool.