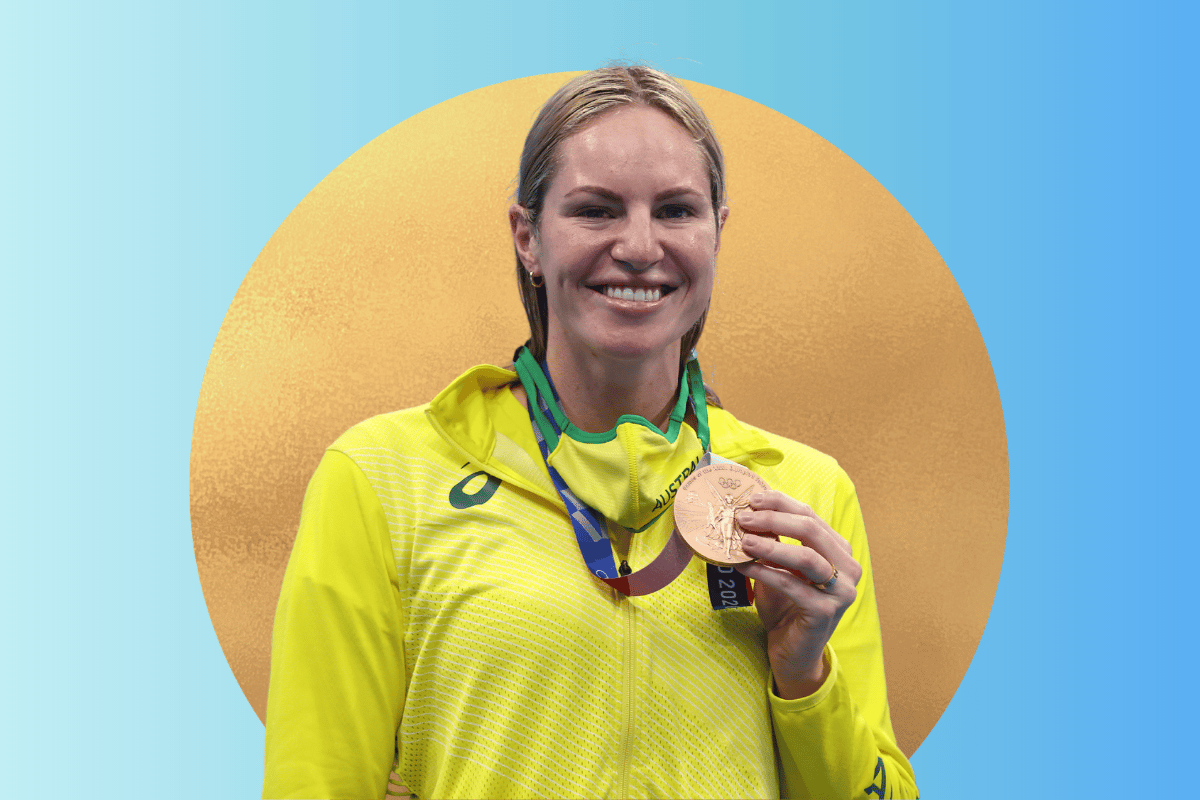 But McKeown felt Seebohm "deserved to be on that gold medal podium just as much as I did" and invited her to stand side by side as the national anthem played.

"Em’s been around for so long and I’ve always spoken so highly of her, I speak of her highly for a reason," she said after the race. 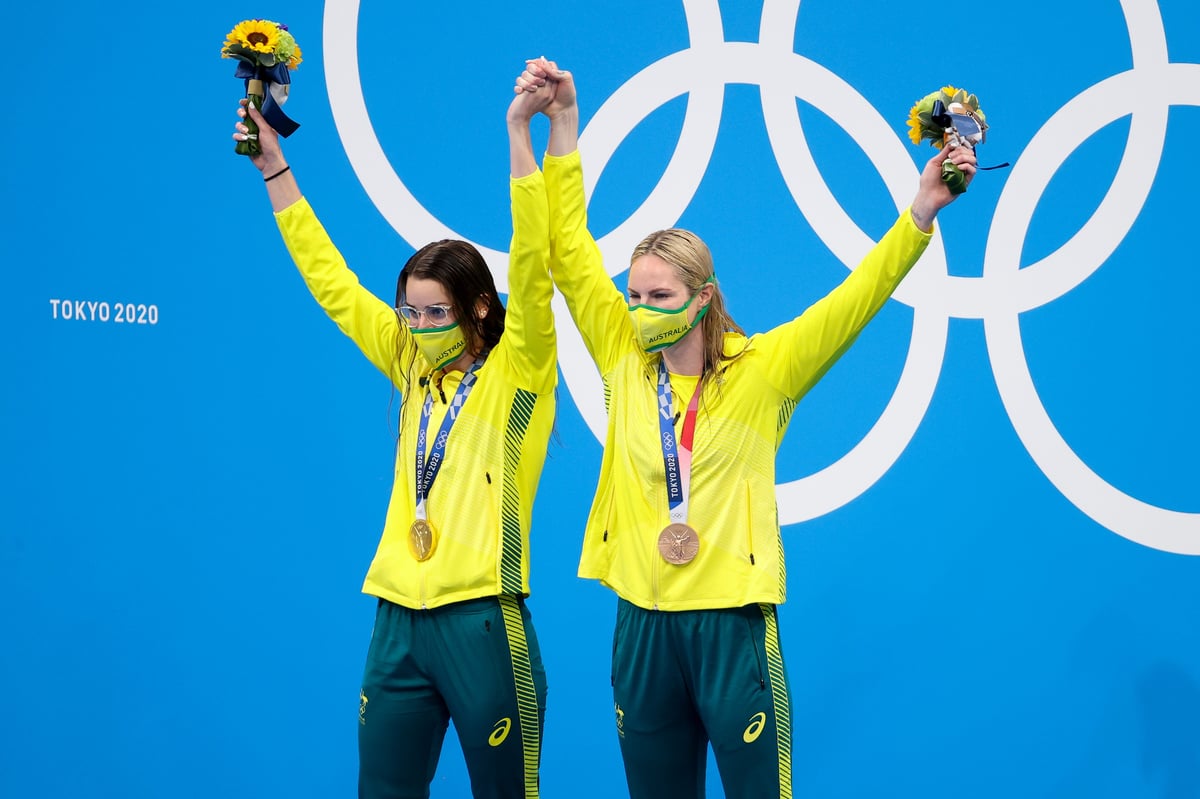 This is the fourth time Seebohm has represented Australia at the Olympic Games. She's one of only three Aussie swimmers who have done so. And each time she's walked away with a medal.

"It’s so amazing, I never thought this was going to happen again," Seebohm told Channel Seven after the race as she wiped tears from her eyes.

"I’m just so proud. The team has done so well and it’s an absolute dream to be on this team and I’m so grateful for all the times I’ve been on the Australian swim team. Honestly, it’s been the favourite thing of my entire career to be on this team."

But outside of the pool, Seebohm's journey to the Games hasn't always been easy.

Over the years, the six time Olympic medallist has dealt with endometriosis, an eating disorder and a messy breakup that played out in the public eye.

After making Australia proud once again, it's time to get to know the Adelaide-born athlete a little better.

Emily Seebohm's road to the Olympics and struggle with endometriosis.

Seebohm first stepped foot on an Olympic podium as a teenager when she won gold at Beijing in the women's 4x100m medley relay, alongside Leisel Jones, Libby Trickett and Jessica Schipper.

In Rio, she bagged another silver medal in the women’s 4x100m medley relay before winning bronze in the women's 200m backstroke at Tokyo this year.

Unfortunately, her victory hasn't come without a few setbacks.

In 2015, a horse riding accident left her with a dislocated knee which paused her career. She was also diagnosed with endometriosis ahead of the 2016 Games in Rio.

"I was in bed almost every day before Rio between (training) sessions, just to let my body recover so I could do a good session that night," she told News Corp in 2017.

"Some days I just couldn’t get up. I just couldn’t make my body do it. I was too tired. I wasn’t riding my horse, I couldn’t go to pole-dancing, I was doing none of that stuff I love to do and I missed the fun of it.

"I thought I was losing my mind. I would say… ‘This isn’t me. What’s wrong with me? Why am I struggling?’"

At the time, she recalled feeling "flat and down and in a dark hole".

Before being diagnosed, Seebohm said she didn't think anything was wrong and the pain she was feeling simply had to do with her pushing herself in training.

"I never really saw it as something else, like I would put it down to training really hard or thinking that I'm not as young as I was and not as energised as I used to be," she told The Courier Mail.

"It's hard to separate the two but I think for me, it made me a stronger person because I had to go through that and race with that."

The 29-year-old is now an ambassador for Endometriosis Australia and encourages other women to share their experiences with endometriosis.

Seebohm made headlines in 2018 when she announced her split from fellow swimmer Mitch Larkin.

The pair were the golden couple of Australian swimming and quickly became caught up in a scandal after speculation rose that Larkin had cheated.

The rumours were born from reports that Seebohm found text messages from another woman on Larkin's phone. She later announced their breakup on Instagram.

"Due to current events that have occurred, Mitch Larkin and I have decided to end our relationship and go our separate ways," she wrote on Instagram at the time.

In an exclusive interview with Courier Mail in 2018, Seebohm said she "wanted nothing to do with" Larkin, who also competed at the Tokyo Olympics this year.

"I just want to get on with my life, move on and want nothing to do with him and that is the best outcome. I feel stronger than ever and ready to put all this behind us and move on with my life."

At the time, Larkin denied the cheating accusations and has now moved on with law student Sinead Cronin.

But after a year-long relationship, the couple split earlier this year because "their differing lifestyles reportedly put their relationship under strain," according to the Courier Mail.

After experiencing her second break up in the public eye, the 29-year-old has now moved on to someone new.

In May, Seebohm went Instagram official with her new boyfriend, whom she did not name in the post.

In January, Seebohm opened about her eating disorder, which she had been dealing with for over two years.

The 29-year-old went on to say that she's "been embarrassed to be in my togs" and was told she needed to lose weight to swim faster.

"I have judged my body every time I have been in front of a mirror. I’ve been told that the only way I can swim faster is by losing weight and I have believed it."

"This year I’m going to be braver for myself. To give my body the love it deserves, and to start I needed to be honest to everyone including myself. I’m not asking for anything but hoping that I can help someone who could be feeling the same."

She concluded the post saying she got a butterfly tattoo on her wrist to represent the Butterfly Foundation, which helps people struggling with eating disorders.

Since then, Seebohm has spoken out about the comments she's received about her body, saying that she 'lost confidence' in her swimming.

"A lot of people said that I wasn’t going to do it," she told AAP in June. "I was too old. I needed to lose weight, I needed to look different."

"I lost a lot of confidence in my swimming. I knew this was going to be super-tough to make this [Tokyo] team, and I really wanted to go to a fourth Olympics, that was my dream."

"It’s just really nice to be back - after 2019, I didn’t think that I would... I guess I just stuck to my guns and stuck to what I knew would work best for me."