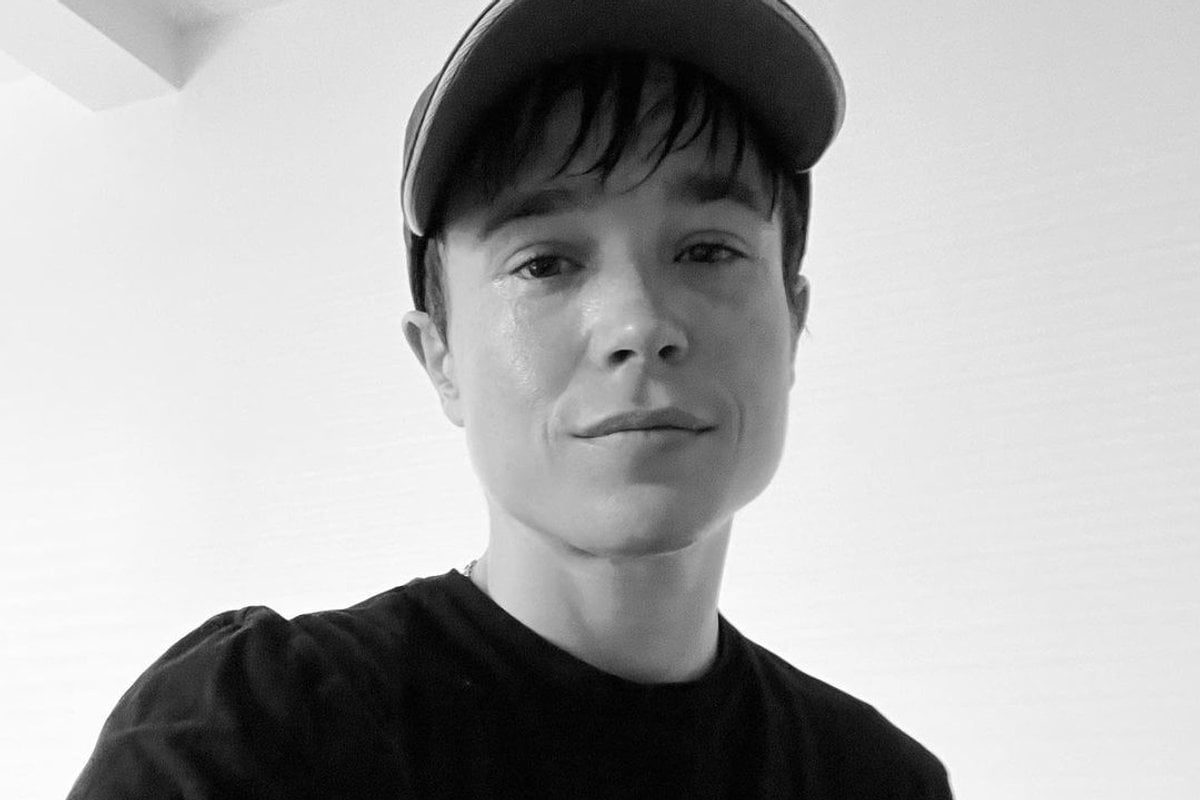 This post deals with mental health, and could be triggering for some readers.

He had just played the lead role in Juno, a coming-of-age drama about a teenager who unexpectedly falls pregnant.

The film was a massive success, both critically and commercially, earning four Oscar nominations, including a Best Actress nod for Page's performance.

Watch the trailer for Juno here. Post continues below.

But it was at the height of the film's popularity that Page, who has since come out as transgender, was struggling with his identity the most.

"During awards-season time, I was closeted, dressed in heels and the whole look - I wasn’t okay, and I didn’t know how to talk about that with anyone," the 35-year-old wrote in a new article for Esquire, for which he appears on the June 2022 cover.

"But when Juno was blowing up - this sounds strange to people, and I get that people don’t understand. Oh, f*** you, you’re famous, and you have money, and you had to wear a dress, boo-hoo. I don’t not understand that reaction.

"But that’s mixed with: I wish people would understand that that sh*t literally did almost kill me."

Wearing dresses became not only mentally, but physically painful; to the point where Page could barely function.

"I would berate myself for it," he wrote.

"I was living the life and my dreams were coming true, and all that was happening. And yet, for example, when I was shooting Inception, I could pretty much not leave whatever hotel I’d be staying in."

In December 2020, Page announced he was transgender.

"Hi friends, I want to share with you that I am trans, my pronouns are he/they and my name is Elliot. I feel so lucky to be writing this. To be here. To have arrived at this place in my life," the actor wrote on Instagram.

"I feel overwhelming gratitude for the incredible people who have supported me along this journey. I can't begin to express how remarkable it feels to finally love who I am enough to pursue my authentic self."

Speaking to the TV host, Page explained just how bad his mental health became when his manager surprised him with three dress options to pick from for the Inception Paris premiere.

"It was like a cinematic moment, you know, the kind of thing that would be in a movie. And that night, after the premiere, and at the after-party, I collapsed, and that was something that's happened frequently in my life, usually corresponding with a panic attack," he continued.

"And yeah, I'm sure the two corollate and that whole period correlates."

In Page's June 2022 article for Esquire, the actor wrote about his childhood, career, transition and life now.

He detailed the period before transitioning - discussing just how uncomfortable life became living in the body he was born into.

"There were days when I’d only have one meeting, and I’d leave my house to go to the meeting and have to turn around."

Page knew living as a female wasn't in his future.

"I could not picture myself as a woman aging. Obviously," he wrote.

"I would say, verbatim: I’ve never been a girl. I’ll never be a woman."

The actor also looked back on filming Juno and its success, wishing he hadn't "squashed" just how important of a movie it was.

"People, especially teenage girls, really responded to that character, Juno. The clothing - which was just me taking a producer to used-clothing stores in Vancouver. The vibe - something that was, if not nonexistent... it was new for a film that reached the audience it reached, and with her as the title character," he wrote.

"It related to my queerness and my transness," he added.

"I wish I could go back and experience it now. As me."

Page also examined his transition and people's mixed response to it.

"In terms of the actual quality of the response, it was what I expected: love and support from many people and hatred and cruelty and vitriol from so many others.

"I came out as gay in 2014, and it’s different. Transphobia is just so, so, so extreme. The hatred and the cruelty is so much more incessant."

He wrote about one personal experience, highlighting the abuse trans people deal with on a day-to-day basis.

"This really big dude, less than an arm’s length away, was just screaming at me, 'You f*ggot! Don’t look at me! You f*ggot, f*ggot!' I couldn’t even just go, like, I’m not looking at you," Page wrote.

"So I ran - I was alone - I ran into a convenience store, and as I was opening the door he yelled, 'This is why I need a gun!' he wrote.

But Page shared the negativity he has experienced since transitioning is outweighed by the joy he feels in living authentically.

"I know I look different to others, but to me I’m just starting to look like myself," he wrote.

"It’s indescribable, because I’m just like, there I am. And thank God. Here I am."

Reply
Upvote
6 upvotes
It's astonishing to me that someone could get so angry about another person being trans (or gay, or whatever else) that they scream at them in the way described here. How on earth can you be so upset about a stranger's life, which in no way affects you?
News
General
Opinion
True Crime
Politics
Sport
Explainer
Entertainment
Celebrity
Reality TV
Movies
TV
Books
Rogue
Royal
Lifestyle
Beauty
Fashion
Weddings
Home
Wellness
Health
Fitness
Travel
Food
Family
Before The Bump
Pregnancy
Baby
Kids
Teens
School
Parent Opinion
Work & Money
Money
Finance
Career
Lady Startup
Relationships
Sex
Dating
Separation
Friendship
Family
Real Life
Couples