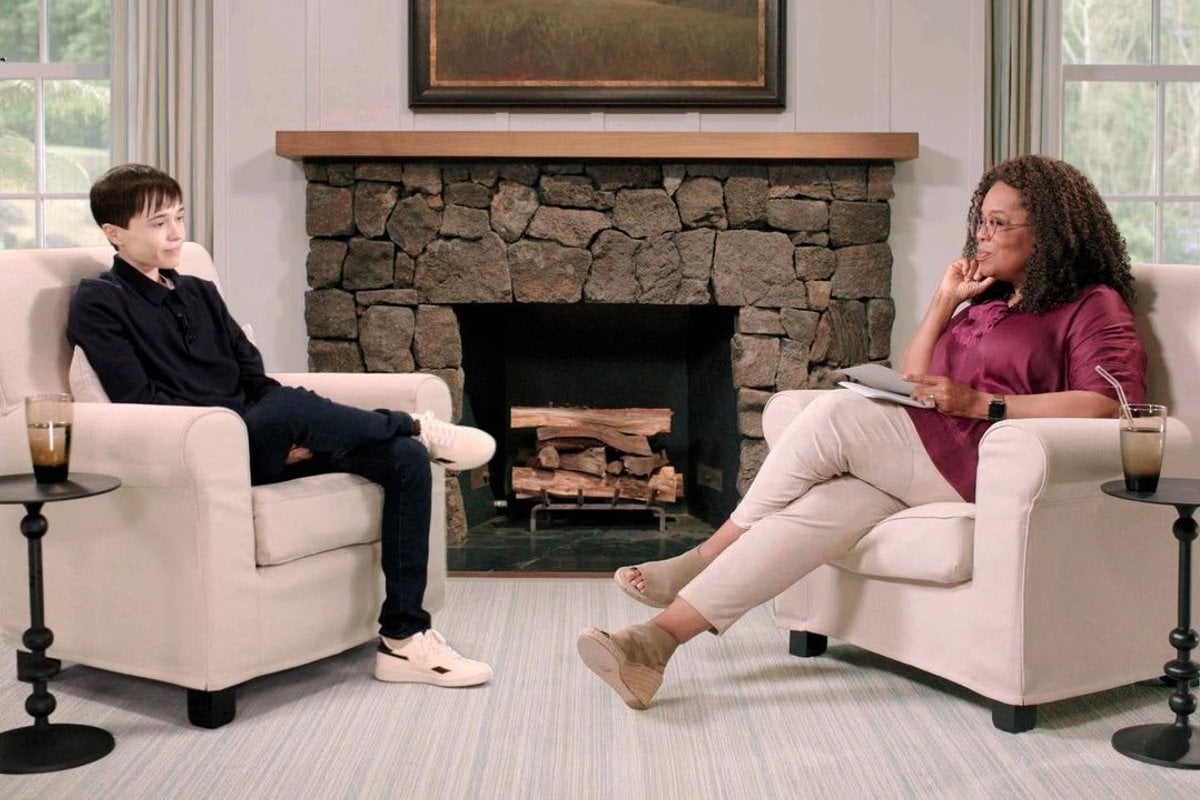 In December 2020, actor Elliot Page announced he was transgender.

"Hi friends, I want to share with you that I am trans, my pronouns are he/they and my name is Elliot. I feel so lucky to be writing this. To be here. To have arrived at this place in my life," the 34-year-old wrote on Instagram.

"I feel overwhelming gratitude for the incredible people who have supported me along this journey. I can't begin to express how remarkable it feels to finally love who I am enough to pursue my authentic self."

Now, five months later, Page has given his first television interview since he came out as transgender, speaking to Oprah Winfrey on the latest episode of The Oprah Conversation.

Here are the biggest moments from their interview.

"It is life-saving." Elliot Page opens up about his surgery.

During the interview, Page explained that undergoing top surgery (otherwise known as chest reconstruction surgery) was "life-saving" for him.

"I want people to know that not only has it been life-changing for me, I do believe it is life-saving, and it's the case for so many people," Page told Winfrey.

"I just was probably driving my friends crazy, like sending them profile photos of me, you know, post-top surgery and how different I felt after that," he said.

"[It’s] just sort of this newfound energy, because it is such a freeing, freeing experience."

The actor explained it was the little things that have given him the most joy since transitioning.

Things like wearing a t-shirt, having a towel around his waist after taking a shower, and touching his flat chest made him "feel comfortable" in his body for the first time.

"This is incredibly new," he shared. "I feel like I haven't gotten to be myself since I was 10 years old."

Page was "in pain" while attending the Oscars for Juno.

In 2008, at age 21, Page earned an Oscar nomination for his work in Juno, a coming-of-age film about a teenager who unexpectedly falls pregnant.

When speaking to Winfrey, Page shared that at the Oscars awards night - where Juno was up for four nominations - he "couldn't express the degree of pain" he was in.

"That was a pretty intense time," he said.

"I remember thinking it was impossible to communicate with people how unwell I was because obviously there is so much excitement. Juno unexpectedly became a big hit. I became quite well known. I felt like I couldn't express the degree of pain that I was in," he continued.

"I could not look at a photo from that red carpet."

Page also explained that his mental health got so bad that he considered quitting acting altogether.

"There were periods where I felt like I barely was existing," he said.

He "collapsed" at an Inception after-party over gender pressures.

Further on in the interview, Page discussed how wearing feminine clothing hugely affected his mental health.

"It was becoming way too detrimental to my mental health to wear feminine clothing," he said.

Page explained that during the Paris leg of the Inception world press tour, his manager surprised him with three dress options to pick from. It was then he hit a breaking point.

"It was like a cinematic moment, you know, the kind of thing that would be in a movie. And that night, after the premiere, and at the after-party, I collapsed, and that was something that's happened frequently in my life, usually corresponding with a panic attack," he continued.

"And yeah, I'm sure the two corollate and that whole period correlates."

When Winfrey asked Page whether he knew he was transgender at the time, but hadn't yet acknowledged it, he replied: "For so long I didn't have much language or information."

Listen to The Spill, Mamamia's daily entertainment podcast, below. Post continues after audio.

The actor's message to trans youth.

When Opah asked Page why he decided to do the interview, Page said: "In this time we’re in right now and especially with this horrible backlash we’re seeing toward trans people, particularly trans youth, it really felt imperative to do so."

He also shared a message to trans youth.

"I want to tell them that I see them, that they exist, that they are real," Page said.

"I know for me right now going and looking at the attacks against trans kids right now and the rhetoric, I can’t imagine what it feels like, on top of everything else.

"I just want kids to know that they’re loved. And I’m going to continue to do what I can to try to help this society shift how it treats transgender people."

You can watch the whole interview with Elliot Page on The Oprah Conversation on Apple TV+ now.

Reply
Upvote
3 upvotes
To me trans phobia and trans hate is unfathomable. Like Why? Why hate people for trying to be their authentic selves? I just don't understand. Being trans hurts zero others but having to hide being trans seems to hurt trans people deeply.

Reply
Upvote
@beachhouse84 It stems from fear and TERFs and other anti-trans groups see Trans people (especially trans women) as the enemy. It's a sad, ignorant and angry way to spend your energy.