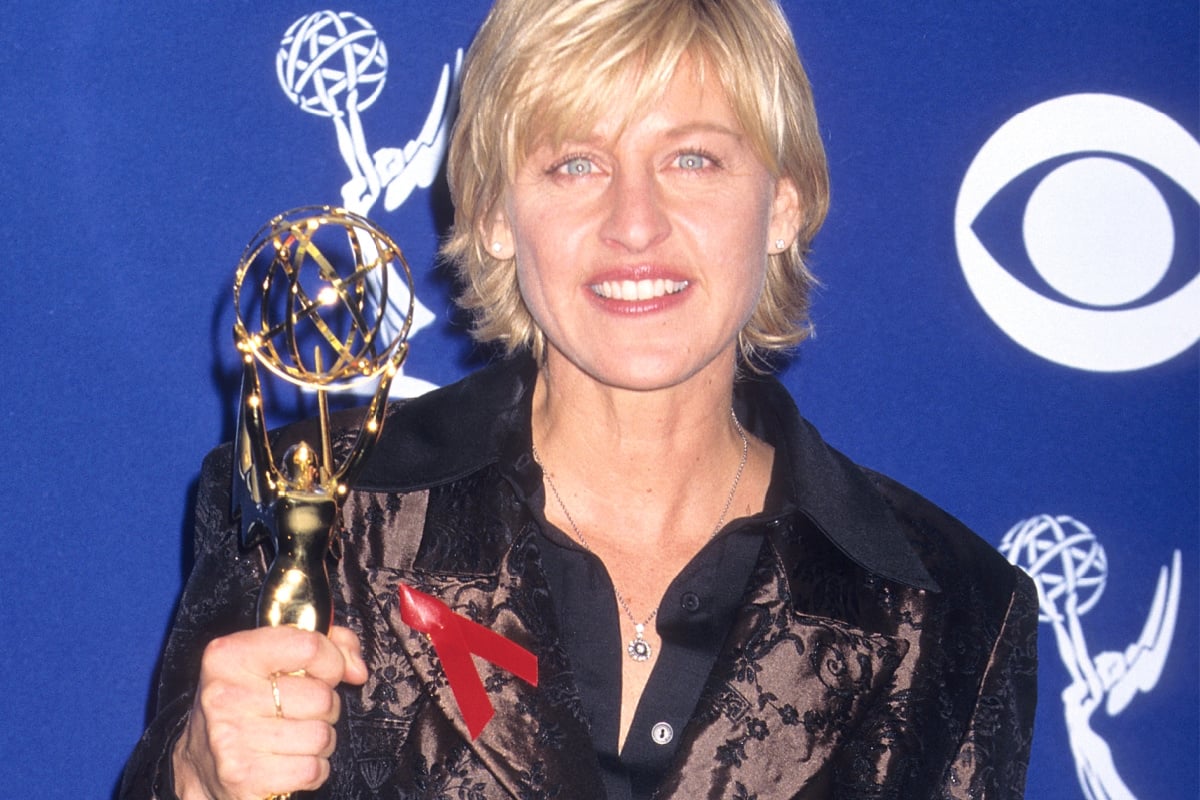 Living in a time when gay people announce they’re getting married or having babies and no one bats an eyelid, it might be hard to appreciate what a big deal it was when Ellen DeGeneres came out as gay in 1997. But it was a big deal. A very, very big deal.

DeGeneres made a name for herself as a stand-up comedian in the 1980s. Back then, the people close to her were aware of her sexuality. She hung out at a local lesbian bar in New Orleans, and when she moved to San Francisco in 1984, she told her manager Bob Fisher she was gay.

"She was very relieved it wasn't an issue," he told Newsweek. "I already knew Ellen was gay. It was sort of taken for granted."

Watch: Ellen's coming out interview on Oprah. Post continues below.

Video via The Oprah Winfrey Show

Like a lot of the biggest stand-up comedy stars of the 1990s, DeGeneres was given her own sitcom, Ellen. She played a character called Ellen Morgan, and her show was referred to as the "female Seinfeld". But Ellen was a bit lost when it came to the main character’s relationships. Ellen Morgan never found a man she really connected with. Network executives suggested that maybe she should get a puppy.

Although DeGeneres' staff at the sitcom knew she was gay, she didn’t really want to go public about it. As she later told Oprah Winfrey, she didn’t feel like it was anyone’s business who she was dating. Then she changed her mind.

"I realised that as long as I had this secret that I worried about all the time, that made it look like something was wrong," she said.

DeGeneres convinced network executives to let her character come out, even though she knew it would cost her personally.

"I said, 'I’m going to lose the career. Like, you can just put another show on. It’s my show to lose' – even though it wasn’t my show," she told the podcast Armchair Expert with Dax Shepard recently.

In May 1996, DeGeneres invited her staff to her home and told them that she was going to come out on the show and in real life. There had been gay characters on shows such as Melrose Place, but there hadn’t been a show with a gay leading character. Very few celebrities were openly gay, and public support for gay marriage was at just 27 per cent.

Executive producer Mark Driscoll remembers being excited at the impact it could have.

"Ellen was so loved by audiences, she was so much the girl next door and so sweet," he told Vanity Fair. "She was the perfect person to dispel people’s fears about what a gay woman might be like."

The coming-out process was very carefully planned. The writers sprinkled jokes throughout Ellen’s fourth season. In one scene, Ellen shouted, "I was in the closet," as she walked out of an actual closet.

Executive producer Dava Savel tells Vanity Fair that Winfrey cried as she watched her scenes back on the monitor.

"The tears just flowed down her cheeks and she said, 'I’m so proud to be a part of this. I’m so proud.'"

The big moment has Ellen at an airport, coming out to Susan.

"Why can’t I just say the truth, be who I am?" she asks, before accidentally leaning on a microphone button and broadcasting to the entire airport, "I’m gay."

The studio audience erupts in cheers, as Dern hugs DeGeneres.

The episode was due to air in April 1997, and the buzz around it was huge. Gay groups organised "Come Out With Ellen" parties. DeGeneres’ publicist, Jill Lessard, asked to be an extra in the episode and then decided to come out as gay herself.

"I just got swept up in the moment," she told Newsweek. 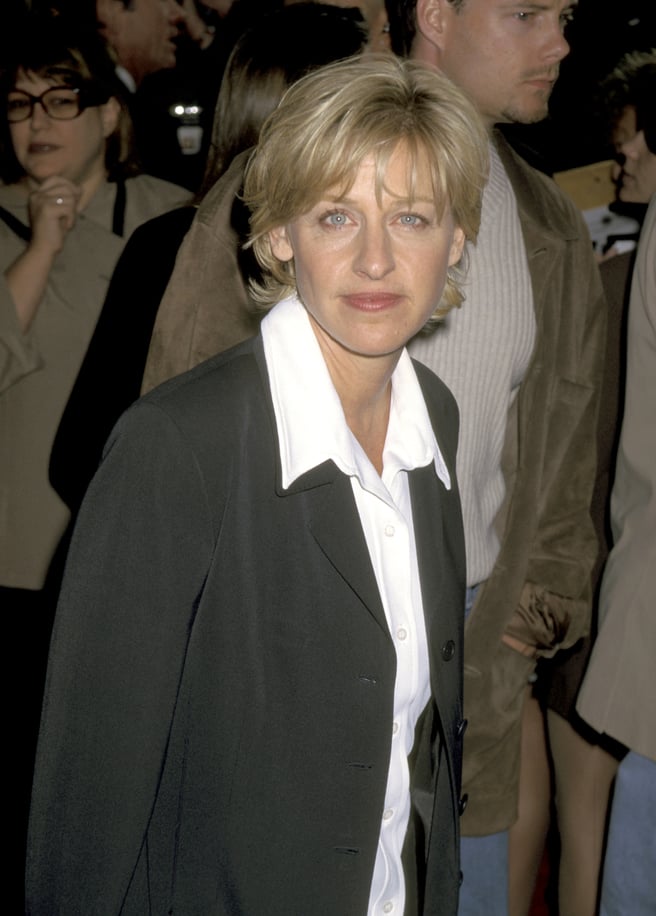 But not everyone was happy.

Co-star Joely Fisher says they had to check the set for bombs before filming because of all the death threats they were getting. Some companies chose not to advertise in that episode, or not to advertise in the series at all. Televangelist Jerry Falwell labelled DeGeneres "Ellen DeGenerate".

She laughed him off. "Really? He called me that? Ellen DeGenerate? I've been getting that since the fourth grade."

DeGeneres did a couple of interviews, including one with Winfrey, to coincide with the episode going to air. She appeared on the cover of Time magazine with the words, "Yep, I’m gay."

The episode was watched by 44 million people. But afterwards, the show’s ratings went into a slide. It was axed, as DeGeneres had predicted. She told Shepard she was looked at as “a failure” in the business and suffered depression.

“No one would touch me. I had no agent, I had no possibility of a job, I had nothing.”

Despite the axing of her sitcom, Ellen’s decision to come out had a huge impact on the industry. It paved the way for shows like Will & Grace to make it to air, and for other celebrities to come out.

"It made it so much easier for me, what you did," Glee’s Jane Lynch once told DeGeneres.

In 2018, Variety named DeGeneres as the person who has done more than any other celebrity or public figure to influence Americans' attitudes to gay rights.

DeGeneres still remembers the people who wrote to her after she came out, telling her how much it meant to them.

"I remember the first letter that I got where somebody said that I saved their life, that they were going to kill themselves and they didn’t because of what I did," she told Winfrey.

Before we all cancel DeGeneres for being mean, and refusing to make eye contact or smile, and not living up to her super-nice talk show persona, let’s just remember how brave she was back in 1997. Let’s remember the risk she took, the abuse she suffered, and what she did for the gay community. That’s her legacy.

Reply
Upvote
3 upvotes
Ellen is an extremely rich white woman. Yes, how she was treated when she came out was bad and her actions helped many LGBTIQ people feel like they belonged. But I'm not going to sit here and feel sorry for a woman of extreme privilege who thinks it fine to run a work place so toxic, people leave and have to sign non-disclosure agreements. Celebrities who went on the show even saw what a toxic work culture it was, and were treated like crap by her. If she was treating celebrities like crap, it's not hard to imagine that her employees copped it pretty bad. Employees who are now speaking out and don't have the wealth or power that Ellen has.
Ellen isn't being "cancelled", she is being held accountable for her actions, and the actions of people who worked for her and the toxic workplace culture she allowed to fester.
mamamia-user-482898552 5 months ago

Reply
Upvote
4 upvotes
"Before we all cancel DeGeneres for being mean, and refusing to make eye contact or smile, and not living up to her super-nice talk show persona, let’s just remember how brave she was back in 1997. "
No. Let's not minimize and trivialize the claims about her to matters such as "not smiling". She has been accused of perpetrating an unsafe work environment which was permissive of bullying and racism, amongst other things. That's a whole lot more serious than trivial things like not making eye contact - it's disingenuous to try to frame this as an issue that is about her not smiling enough. Her "being brave" in the late nineties does not give her a pass for being abusive today.
To cite an extreme example, Bill Cosby did an immense amount for the visibility and acceptance of black entertainers and their culture. However, his criminal behaviour off-camera pretty much burned his legacy to the ground, to the point that I doubt anyone would write an article saying "...but what about all the good things Bill Cosby did?". So why are we getting articles talking up Ellen's legacy by reminding us about her life in the 1990's? It was her legacy. She burned it to the ground. It's on her to salvage, not us - but so far, I'm seeing no apologies or contrition on her part.
cat 5 months ago

Reply
Upvote
1 upvotes
@mamamia-user-482898552 there’s a pretty huge gap between drugging and raping 80 women and failing to quash racism though. She’s far more comparable to Steve Jobs- famously awful to work with and did nothing particularly good- whose legacy is more than in tact.
mamamia-user-482898552 5 months ago

Reply
Upvote
@cat Steve Jobs wasn't an entertainer and his legacy is an inanimate product (ie Apple). Bill Cosby and Ellen Degeneres are entertainers, and their legacies are inextricably linked to their products, which is themselves as entertainers and individuals (and by extension, the way they behave). Steve Jobs's crappy behaviour doesn't make Apple products any more or less functional. You can't say the same about the influence of Cosby and DeGeneres's behaviour on their product.
The author of this piece seems determined that one's legacy cannot be sullied by bad behaviour. This is a miscalculation - Cosby is just an extreme example to illustrate that a legacy can indeed be lost.
cat 5 months ago

Reply
Upvote
@mamamia-user-482898552 it can be, but I doubt in 10 years time people will look back and remember that Ellen was mean while forgetting all about 30 years of huge success. Cosby is a useful example in that he shows that you need a lot to destroy a legacy. Child abuse didn’t do it for Woody Allen or Polanski, or even for Michael Jackson. The tipping point is somewhere between being a pedophile and 80 rapes. The author is right that Ellen’s transgressions fall far short by that measure.
News
General
Opinion
True Crime
Politics
Sport
Explainer
Entertainment
Celebrity
Reality TV
Movies
TV
Books
Rogue
Royal
Lifestyle
Beauty
Fashion
Weddings
Home
Wellness
Health
Fitness
Travel
Food
Parents
Before The Bump
Pregnancy
Baby
Kids
Teens
School
Parent Opinion
Work & Money
Money
Finance
Career
Lady Startup
Relationships
Sex
Dating
Separation
Friendship
Family
Real Life
Couples