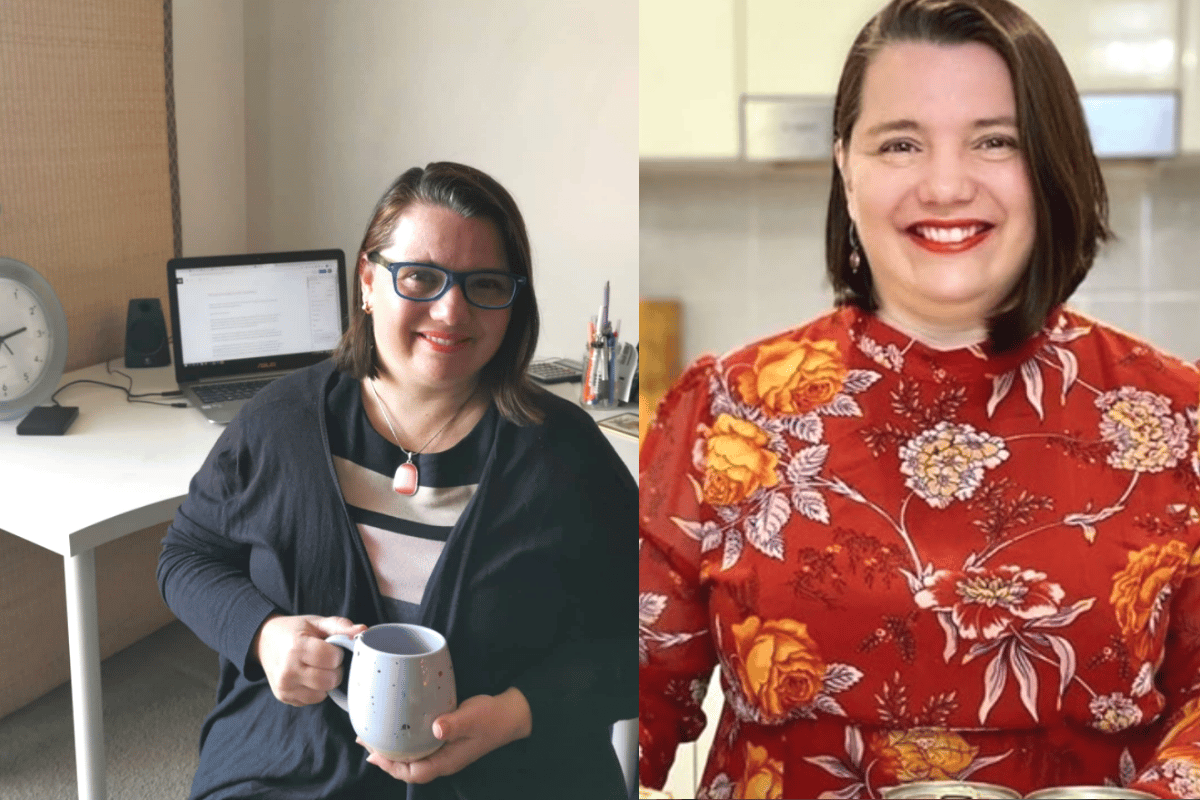 Serina Bird has experienced a lot in her almost 50 years.

Not too long ago, she was riding the career wave in a high-flying posting across Asia as a diplomat. To any onlooker, Serina's life looked glamorous - she was a successful and smart woman, married with two children. But behind closed doors, things were far from perfect. Serina was a victim-survivor of domestic violence.

When Serina left her abusive marriage, she struggled financially. Determined to find financial independence, Serina had to be frugal. And that frugality led her to be able to retire in her late 40s.

"Frugality was initially a means for me achieving autonomy and independence. Now I'm not in a position where I have to be frugal - but it has become a way of life for me," Serina told Mamamia.

Watch: 4 money hacks that don't cut out your daily cup of coffee! Post continues below.

In the early days and raised in a well-to-do family, Serina knew she wanted to be a diplomat. And after her studies, Serina achieved that dream. But it was an overwhelming start.

"I remember my first week of working in the Department of Foreign Affairs and Trade. There were two ladies in my team who were talking about their shoes, and one had bought their pair on a trip to Florence in Italy. They kept raving about brands, and all I could think was that I was wearing a lipstick from my local market that I had bought for 20 cents," Serina recalled.

"I certainly had my share of glamorous times, like I was posted to Taipei in an economic and trade role for three and a half years. I met some incredible people and did some incredible things, plus I was the breadwinner in my family. But it was a stressful career and I never lost touch with my desire to save every last penny."

At the time, Serina was married to her first husband and shared two kids with him. While posted to Taiwan, Serina felt extremely isolated. She was in a foreign country, work was stressful, and her husband had started becoming violent.

"It was very difficult because I didn't have my loved ones there with me for support," she told Mamamia.

Listen to Mamamia's The Quicky. Post continues after audio.

After returning to Australia and settling in Canberra, Serina left her violent marriage and went to the ACT Magistrates Court to take out a domestic violence order. This was in 2014.

"In my case, I figured it would be easy to solve - we had people who had witnessed me with bruises on my face and other things happening, and I figured I would easily get to keep the kids. But what shocked me was the cost, time and toll it took. I was the victim, and yet I bared the brunt."

As the main income earner, Serina had to give over a third of her superannuation to her ex-husband. But as her lawyer explained, there are very few cases of women who are both the main income earner and primary caregiver. And from Serina's perspective, the court doesn't know how to handle these situations. Serina and her former husband's property portfolio was also an issue. It was heavily negatively geared, leaving her to cope with multiple mortgages. Not to mention, childcare costs are some of the most expensive in Canberra.

"I felt very judged by the court system. I had to keep working to afford the astronomical legal fees, the court fees in order to get my kids and myself in a safe space, and pay money [to my abusive ex-husband]. It was really difficult," Serina said.

Years down the track, Serina knows she made the right decision. And as she puts it, the decision to leave was out of love - for herself and her kids.

"My kids and I are now happy and I've remarried. At the time I knew I had to put the love for myself first. When rebuilding after that experience, my mantra was 'one day at a time, one thing at a time'. And it helped - I found my own voice."

Over time, things did get better. Serina continued to excel in her career, but after experiencing financial strain during the divorce, she continued to live frugally.

"It can be really easy when you're making money to want to spend that money. But instead, I became focused on saving and investing and becoming a 'frugalista'. That means someone who looks fashionable on a budget, is frugal in what they eat, cook and how they live. And it was that lifestyle that allowed me to become more prosperous," Serina explained.

After she'd earned and saved enough money while embracing a 'penny-pinching lifestyle, Serina decided to quit her diplomat job and retire at the age of 47. Work was stressful, her mental health was declining and she wanted to spend more time with her kids.

"It was really scary making that decision. After going through domestic violence, having a stable job and stable income was my lifeboat. But I knew that work was becoming too much for me, and I was probably only a couple of months away from a breakdown."

Of course, Serina earned good money in her job as a diplomat helped her to save and retire. There is privilege in that. But it's what Serina decided to do with her money and the fact she still continues to lead a frugal lifestyle that played an important role too.

When Serina retired, she became part of the Financial Independence Retire Early movement (F.I.R.E) - a movement of people who are devoted to extreme savings and investment that aims to allow them to retire far earlier than traditional budgets and retirement plans would usually permit. A growing movement, people in the F.I.R.E community are from all walks of life and occupational backgrounds, united in their determination to save money and retire early.

"I always wanted to have the financial freedom to leave my job if I didn't love it anymore. I feel that the FIRE community actually co-opted me - the more that I met people in the movement, and the more stories I heard, I realised that my goals had changed. And that's where The Joyful Frugalista was born."

Passionate about advocating for frugal living, Serina has since turned to creating a podcast and writing two books about her experiences, as she knows what it's like to be stressed over money.

"When I was going through difficult times, I started blogging about budget meals or clothes swaps and found ways to live cheaper - ideas I then wanted to share with other women," she said. "Initially, I wasn't sure whether I could speak about what I had been through, as it was very raw. But by sharing, I've really found my voice."

The women that Serina speaks to - who are mostly in their 40s to 60s - have shared similar stories of financial stress. And it's for this reason that Serina thinks it is crucial women keep having these important shared conversations around money and independence. Because "women crave authenticity".

"Women over 55 are the largest growing cohort who are experiencing homelessness in Australia. It makes me sad to know some women are worried about retirement and their financial position," Serina said to Mamamia.

The fact that Serina has retired doesn't mean all her problems have gone away - just like her working days, there are good and bad times. But Serina feels joy in the fact she can be more creative and have freedom.

"Having the autonomy to start living life the way I want, now in my almost-50s, given the adversity I faced - I wouldn't trade it for the world."

Get cooking: It's easy to spend a lot eating out. Get creative in the kitchen instead. You can look to my Instagram for some cheap meal inspiration.

Reduce your alcohol: How much of your budget is going into booze? Save your alcohol consumption for special evenings out and celebrations rather than making it an everyday habit.

Walk or cycle wherever possible: You might think it's just a quick trip to the shops, but all those little journeys add up fast. With petrol prices at record highs and likely to stay that way, it's time to rethink your transport. An added bonus to adopting active transport is that your health will benefit as well.

Reduce video streaming and cable services: Do you need every single streaming platform subscription? Depending on how much you watch, you might be better off only paying for the videos you actually watch or just one streaming service. And don't forget free streaming services such as ABCiView and SBS On Demand.

Connect with others on a F.I.R.E path: Sometimes it can feel like you are the only one who is focused on saving for your early retirement! Family and friends might be focused more on immediate fun than the delayed gratification of financial security. Connect with others who share similar goals to keep yourself motivated. Good Facebook Groups include the Aussie FIRE Discussion Group, Financial Independence & Early Retirement Australia, and my own group - The Joyful Frugalista.

To hear more of Serina's stories or to purchase her books, you can visit her website here. You can also follow along via her Instagram @thejoyfulfrugalista. You can also listen to Serina's podcast The Joyful Frugalista  here.