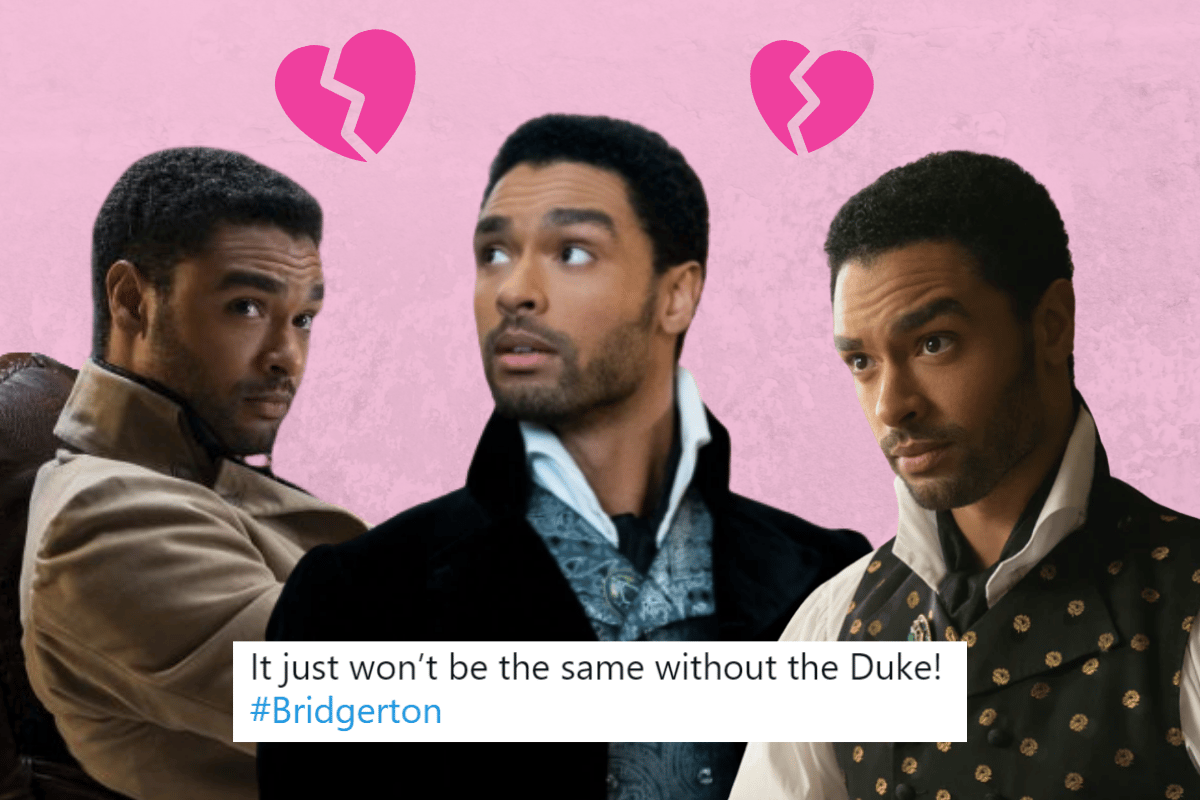 It's time to sob into your Easter chocolate because the Duke of Hastings won't be returning for Bridgerton season two. And we are not ok.

Netflix and Shondaland announced that Simon Basset, played by Regé-Jean Page, won't be appearing in the upcoming season via Lady Whistledow on Saturday.

"Dear Readers, while all eyes turn to Lord Anthony Bridgerton’s quest to find a Viscountess, we bid adieu to Regé-Jean Page, who so triumphantly played the Duke of Hastings," the message began.

"We'll miss Simon’s presence on screen, but he will always be a part of the Bridgerton family," it continued. "Daphne will remain a devoted wife and sister, helping her brother navigate the upcoming social season and what it has to offer – more intrigue and romance than my readers may be able to bear."

"The ride of a lifetime," he wrote on Instagram.

"It’s been an absolute pleasure and a privilege to be your Duke. Joining this family – not just on screen, but off screen too. Our incredibly creative and generous cast, crew, outstanding fans – it’s all been beyond anything I could have imagined. The love is real and will just keep growing."

Sadly, this day was always meant to come.

Fans of Julia Quinn's Bridgerton book series will know that the first season of the show was loosely based off the first book The Duke and I, which focuses on Daphne Bridgerton and Simon Basset. Meanwhile the second book, The Viscount Who Loved Me, centres around Daphne's protective older brother Anthony, and follows his quest for love and how the death of his father impacted him.

Page also told Variety that the plan was always one season.

"It’s a one-season arc. It’s going to have a beginning, middle, end – give us a year," he told the publication.

"[I thought] 'That’s interesting,' because then it felt like a limited series. I get to come in, I get to contribute my bit and then the Bridgerton family rolls on."

READ: New characters and no Duke of Hastings: Everything we know about Bridgerton season two.

Ever since the news was announced, Twitter has had some strong feelings.

And by that we mean, people have gone into a full blown meltdown.

Here's how fans (including Kim Kardashian) have reacted to the departure of our hot duke.

The Duke, Rege-Jean Page, isn’t returning to #Bridgerton for the 2nd season! pic.twitter.com/HnF99xACUw

Women trying to process that Regé-Jean Page wont be in season 2 of #Bridgerton pic.twitter.com/76YZRZ7JDW

Well am not okay with this #Bridgertonpic.twitter.com/AMMY1f8WDl

If Regé-Jean Page is not in coming back then what is the point? What is the point of season 2? Ain't nobody trying to see Anthony. #Bridgerton pic.twitter.com/X0rUWpHtWL

how the locals are receiving the simon news vs. the bridgerton readers knowing that it was bound to happen one day #Bridgerton pic.twitter.com/KjRYILJwsj

It just won’t be the same without the Duke! #Bridgerton pic.twitter.com/3JoYvgNESo

I can deal with the DUKE of SUSSEX leaving but not the DUKE of Hastings #Bridgerton #netflix #RegeJean pic.twitter.com/9IUoWwunY4

Ok but i really wanted to see more of Simon and Daphne as parents in S2 😭 #Bridgerton pic.twitter.com/rKCphiWs2g

#Bridgerton is never gonna be this hot again🥵 pic.twitter.com/OxngNEaIO2

TELL ME THIS IS A JOKE 😭

How am I suppose to live without these scenes??? 😣 #Bridgerton pic.twitter.com/x0OLlAV2mE

What do you think about the Duke of Hastings not appearing in season two of Bridgerton? Let us know in the comments below.