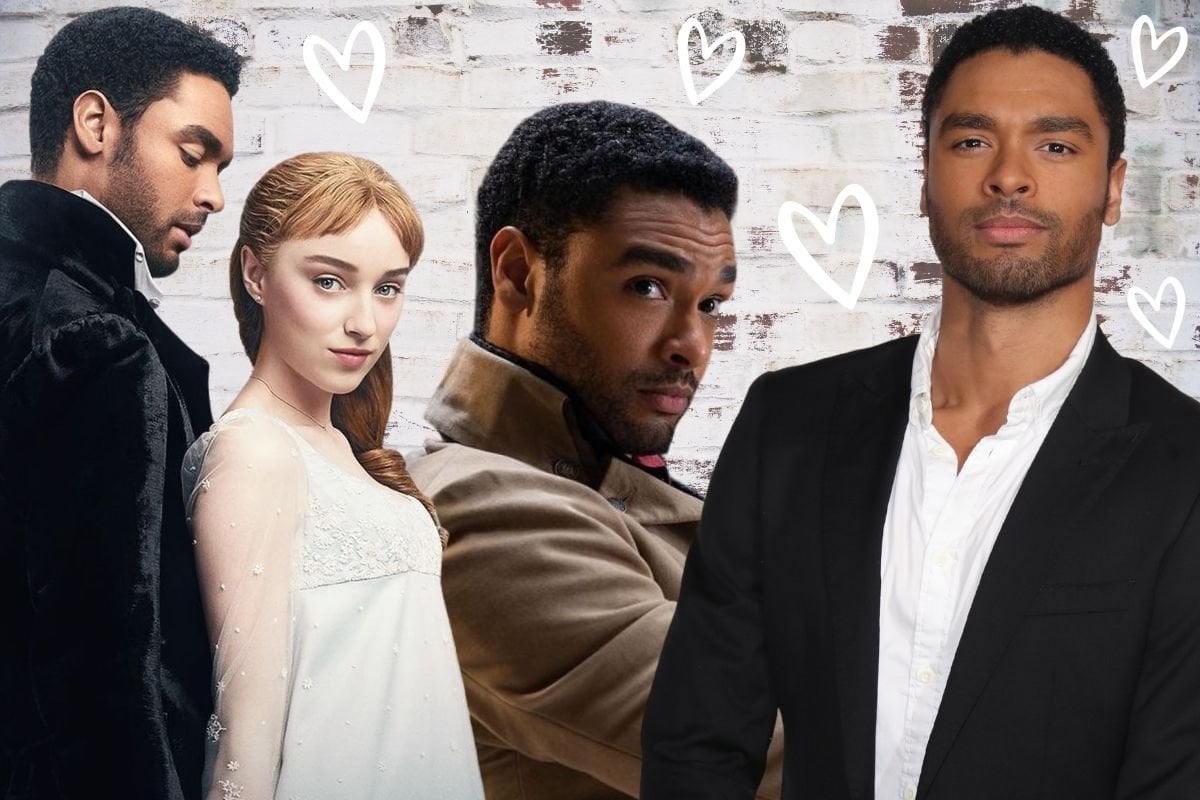 If the name Regé-Jean Page means nothing to you, *exhales breathily*. Then you obviously are yet to meet our new collective boyfriend.

The Zimbabwean and English actor is one of the stars of the new Netflix original series Bridgerton, which we've all been devouring. And while Page's character Simon Basset comes with a number of glaringly toxic red flags, we can't get enough of the man behind the character.

We're assuming you can't either? Great. We've gone to the trouble of doing all of the internet sleuthing for you. You're welcome.

Here's everything we know about the 31-year-old.

Watch: Here's a little recap in case you, like us, watched Bridgerton in one sitting. Post continues after video.

We must begin by informing you that Page has family in Australia. How much family? We don't know. But he has links to our land, please.

In 2016, the actor told Interview Magazine, "We were in Zimbabwe [until I was 14]. But throughout that period my family was rather spread out—I have family in South Africa, Australia, Sweden, Grenada, Florida—so you make pit stops and you grow your perspective. Home is a relative concept. Home is very much wherever it is that your people are and where you fit in."

Born in London, and raised in Zimbabwe until he returned to England for high school, Page has reflected that "it’s very hard to craft an identity in that environment as a young, mixed raced man."

But he also credits growing up in Africa as giving him a much more wordly view - something he doesn't think his LA, London, or New York counterparts have the ability to understand or appreciate.

"They think they’re the centre of the universe, and they kind of are. Growing up outside of that, growing up in Sub-Saharan Africa, you watch these important people making important decisions. They send ripples out to the rest of the world and you ride the ripples," he told Interview Magazine.

Page's mother is a nurse, and his father is a preacher. He is the second youngest of their four children, and spent much of his teenage years playing in a punk rock band with his little brother.

"As a teenager, the idea of running around, screaming at people was very appealing to me," he once told The Fall Mag. "I found comfort in aggression, in breaking through false walls and challenging norms."

Back in the UK, acting was a hobby. As a teenager he did land a small recurring role on the British medical drama, Casualty in 2005. But he had plans to leave acting behind and study sound engineering because it was "halfway between science for my mum and an art for me."

Luckily for us that never happened, and Page instead continued to grace our screens.

So, what else do you recognise him from?

Page graduated from the Drama Centre London in 2013, which has been responsible for talent including Pierce Brosnan, Gemma Chan, Luke Evans, Emilia Clarke, Gwendoline Christie, and Colin Firth.

You might, if you're a superfan, recognise Page from his very brief un-credited appearance in Harry Potter and the Deathly Hallows — Part I. 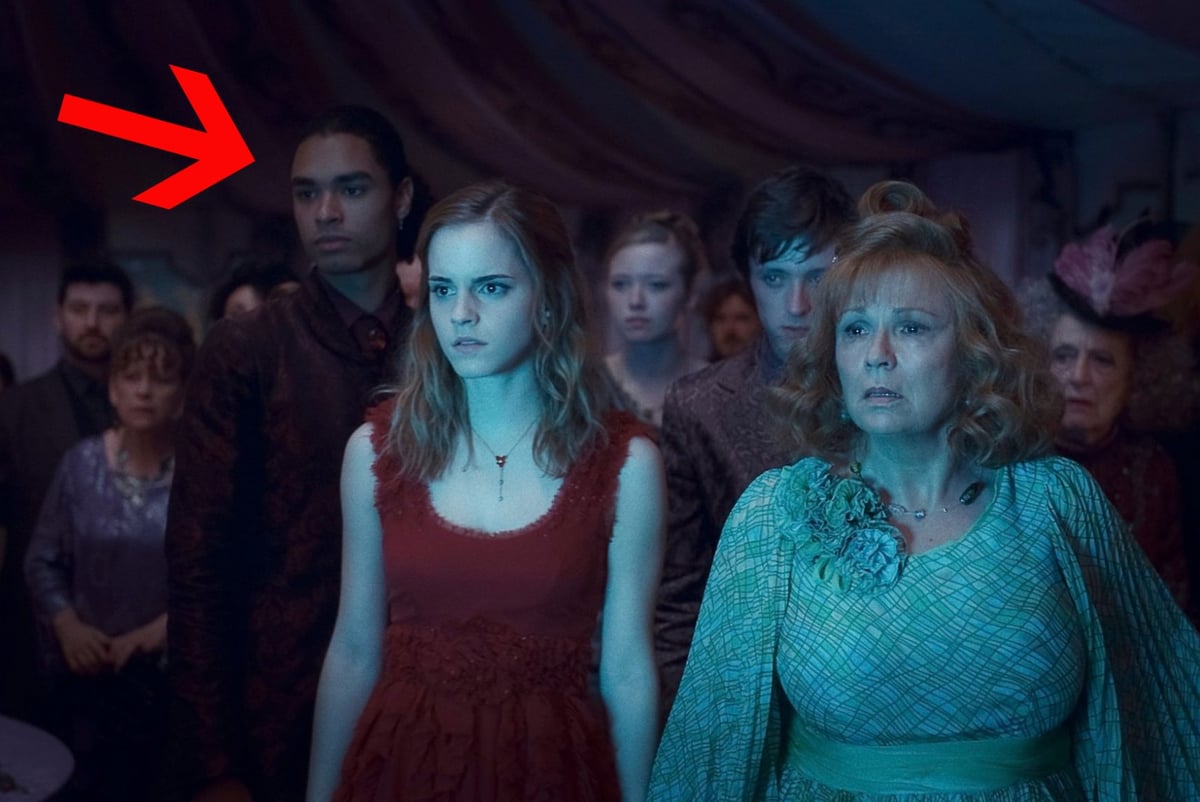 Page appeared EVER so briefly in Harry Potter as a 20-year-old. Image: NBCUniversal.

But his breakout role came in 2016 when he played Chicken George in the History Channel's remake of the iconic 1977 miniseries Roots.

At the time, Page told Variety that he didn't want his career defined by a "breakout" role because "you have to remain reaching for the moment. You grow with every role and absorb things from them. I think it’s interesting to define things as I go."

Talking to InStyle, he reflected that, "My big entrance into this industry was playing an enslaved person, which is an absolute cliché of people of colour."

He decided after that experience he would seek out projects that also spotlight Black joy and love - specifically in period dramas, which have historically left out people of colour.

In an Instagram post in 2019 Page added, "After George… I’ve been as proud of saying ‘no’ as of saying ‘yes’. Hollywood can often see us just one way, and we can end up seeing ourselves within the same limits. But we are rich, exciting, indomitable multitudes; always have been, always will be, always can be. I think the stories that tell us that are important."

He then played Leonard Knox in the ABC legal drama For the People. He wore a lot of suits....and that's all we have to say about that.

Some visual cues, for your reference. Ah-hem. 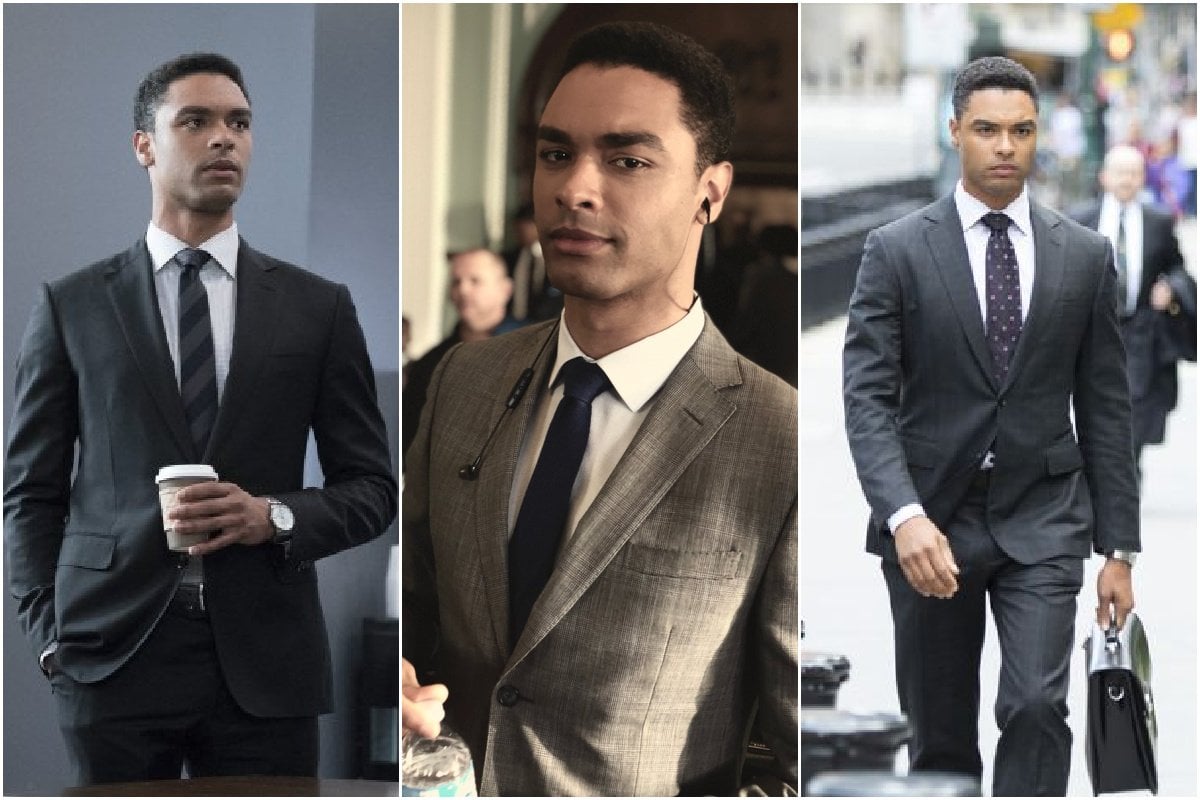 And then, in 2020, came Bridgerton, which was watched by 63 million households in its first 28 days of release.

As he told Esquire, to prepare for the role of Simon Basset he read the first book in the eight-part Julia Quinn series, The Duke and I, on the plane ride home from signing onto the Netflix adaptation. He then dove into the music, literature, and dance of Regency England to get into the minds of the men from the era.

"One of the most exciting things about this project was to deconstruct what’s perceived as masculine strength, because that's a conversation we're having right now. We're asking what masculinity is, and a lot of it is letting go of this constant projection of dominance. We're still trying to figure out how to let men be vulnerable, to realise there’s strength in vulnerability, and that it’s how you fill out the circle of masculinity."

But who, for goodness sake, is Regé-Jean Page dating?

As for who he is dating? We wish we knew.

There was a rumour going around that he was dating his on-screen lover 25-year-old Phoebe Dynevor.

However, in a joint interview for Access, Page said: "I think everything you need to know is on camera. That's why we presented it so beautifully for you. All the sparks that flew off of the beautiful scripts that we were handed, and so I think that the sparky scripted material are more than enough."

Dynevor previously told BAZAAR.com their on-screen intimacy was all credited to weeks of rehearsal and the help of an intimacy coordinator.

The only other whisper of a possible romance we've come across is a rumour he was dating actress Antonia Thomas in 2016 after the pair were spotted on a few red carpets together. 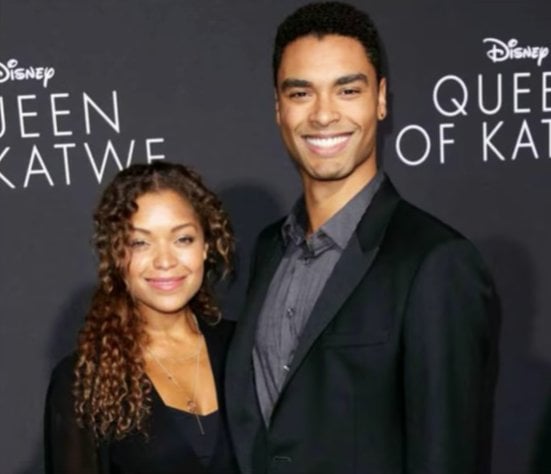 Page has given Entertainment Tonight a glimpse into his love life, telling the publication he is "softer and more open to romance" than his Bridgerton character.

"I'm a huge fan of romance as a concept. Romance is a wonderful thing and we need more of it in the world. Most things at their core are love stories anyway, whether they realise it or not. It's hilarious, the more seriously a show tries to take itself and detach itself from that, the more that the love story generally tends to come forward."

What's next for Regé-Jean Page?

There's speculation brewing Page is a candidate to play the next James Bond, but the actor was quick to water down the rumour telling Jimmy Fallon, "I think the internet thinks a lot of things and that's one of the more pleasant ones.

"I think there is an element of cultural translation to be done here...If you're a Brit and you do something of any kind of renown that people regard well, then people start saying the 'B' word. You get the 'B' word merit badge."

While Bridgerton is yet to be officially renewed, there are rumours of a second season that will begin filming in England in March. Thank goodness.