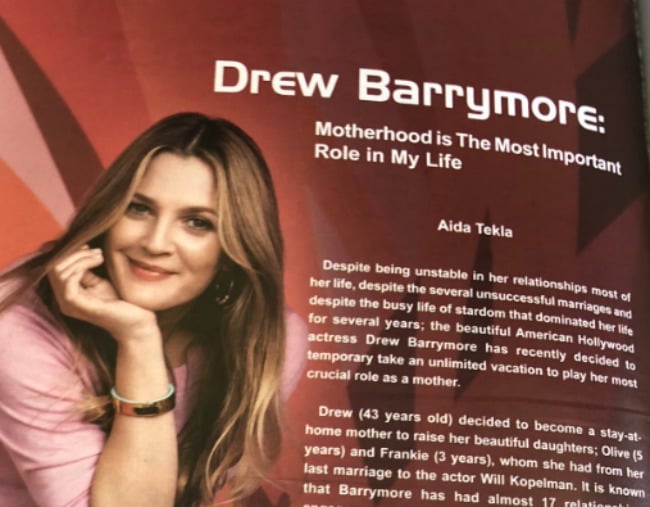 Well. This is the weirdest thing that ever happened.

A man named Adam Baron was sitting on a plane, when he decided to have a flick through the in-flight magazine.

“Oh! There’s a profile on Drew Barrymore!” he probably thought. “I know her. She was in ET and that movie about the chick who keeps losing her memory.”

Barrymore, of course, is one of the most accomplished actors in Hollywood. At 43 years old, she’s appeared in some of the most iconic films of the last 35 years, including The Wedding Singer, Riding in Cars with Boys and Charlie’s Angels.

She also seems… relatively normal. Or rather, seemed. Until this bizarre interview went viral.

You see, Baron took a photo of the profile, titled “Drew Barrymore: Motherhood is The Most Important Role in My Life,” by Aida Tekla and put it on Twitter, with the caption: “This interview with Drew Barrymore in the Egypt Air in flight magazine is, umm, surreal.”

This interview with Drew Barrymore in the Egypt Air in flight magazine is, umm, surreal. pic.twitter.com/fN3lNHXbL0

Surreal is a significant understatement.

Tekla begins the story, which is littered with spelling and grammatical errors, with: “Despite being unstable in her relationships most of her life, despite the several unsuccessful marriages and despite the busy life of stardom that dominated her life for several years; the beautiful American Hollywood actress Drew Barrymore has recently decided to temporary [sic] take an unlimited vacation to play her most crucial role as a mother.”

She explains that Barrymore’s ‘failed’ love life, full engagements, marriages and break ups, is due to the lack of a male role model in her life, given the divorce of her parents at nine years old.

But it gets better.

“Ever since that time, she has been subconsciously seeking attention and care from a male figure; but unfortunately things do not always go as planned and she has not yet succeeded in any relationship for various reasons,” Tekla adds, who maybe thinks she is Sigmund Freud.

The real gold in the interview comes from ‘Barrymore’ herself who after being asked a very, er, rude question about losing her baby weight, apparently responded: “I feel overwhelmed when someone tells me that I have regained my image and managed to lose that extra weight, especially that I felt depressed due to the significant increase in my weight after delivering Frankie…”

That sounds made up but okay.

She goes on to encourage every woman who is overweight to please not be, and suggests they work to regain their “beauty and body”.

It’s at this point one cannot help but conclude that this is either the worst translation in the history of the world, or entirely fabricated.

One Twitter user observed, “Not often you read an interview where the questioner and the subject speak with the same voice,” which is an extremely valid point.

Within hours of the story being posted online, a representative for Barrymore stated emphatically that the actor “did not participate” in the interview, which is code for “this sh*t is completely made up”.

They are “working with the airline PR team,” probably to ensure that this piece of content no longer… exists. In the… world.

"iconic films of the last 35 years, including The Wedding Singer, Riding in Cars with Boys and Charlie’s Angels" - The writer should check this facts. These movies, while enjoyable fare, are hardly iconic.

Oh hell no - you don't mess with Drew!