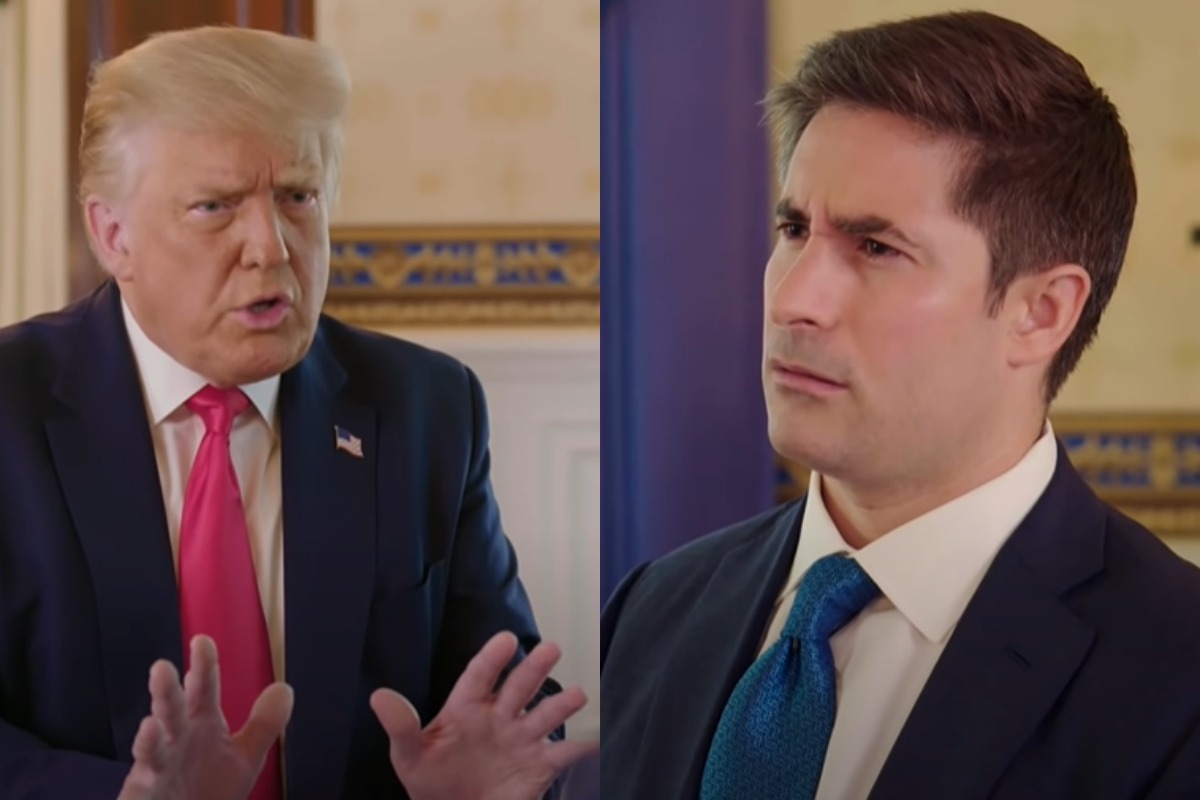 The bizarre interview, which aired on HBO earlier today, saw Trump dodge and ramble his way out of questions about America's escalating COVID-19 crisis. Something the Australian-born political reporter didn't let Trump get away with so easily.

For the past few months, all eyes have been on the United States. At the time of reporting, the US have had 4.8 million confirmed cases of COVID-19 and 158,000 deaths.

So when Axios’s national political correspondent Swan had the chance to ask Trump the questions we've all been thinking, he didn't hesitate.

Correspondent, Jonathan Swan deserves an award, or at the very least, battle pay, for this interview.

Just watched Jonathan Swan from Axios interview Donald Trump -talk about a train wreck. I have never been prouder of being Australian. #AxiosOnHBO #jonathanswan #Trump

It took my 16 year old a few seconds to realize Jonathan Swan’s interview was real and not a comedy sketch.

The only way this interview could’ve ended well for America was if Donald Trump left with the camera crew & Jonathan Swan took over as President.

Here are five of the most baffling moments from Donald Trump's interview.

Trump's attitude towards the escalating COVID-19 crisis in the United States.

Swan started the interview by asking Trump about his 'positive attitude' towards the nation's COVID-19 crisis.

“Look, look, nobody knew what this thing was all about. This has never happened before. 1917, but it was totally different, it was a flu in that case," Trump replied.

"And by the way, if you watch the fake news on television, they don’t even talk about it, but there are 188 other countries right now that are suffering. Some, proportionately, far greater than we are."

He then started deflecting by listing other countries who are also doing it tough right now.

"Some, proportionately, greater than we are. Right now, right now, Spain is having a big spike. And there are tremendous problems in the world. You look at Moscow, look at what’s going on with Moscow. Look at Brazil. Look at these countries, what’s going on. This was sent to us by China, one way or the other, and we’re never going to forget it. Believe me, we’re never going to forget it."

Watch the promo for Jonathan Swan's interview with Donald Trump below. Post continues after video.

Trump on the US death toll.

Later on in the interview, Trump assured Swan that things are currently under control.

"How? A thousand Americans are dying a day," Swan reasonably asked.

"They are dying, that’s true. And it is what it is. But that doesn’t mean we aren’t doing everything we can. It’s under control as much as you can control it. This is a horrible plague that beset us."

"You really think this is as much as we can control it? A thousand deaths a day?" Swan questioned again.

Trump went on to say that they "have done a great job" before seemingly blaming the governors.

The all-important "manuals and books".

In another part of the interview, Trump began rambling about the all-important "manuals and books" which Swan needs to read to become well-informed. Only he was a little non-specific about which books exactly.

It all started when he told Swan that "there are those that say you can test too much."

And his response went a little something like this:

Trump then interrupted. "Let me explain. What testing does, it shows cases. It shows where they may be cases. Other countries test – you know when they test? They test when somebody’s sick. That’s when they test. And I’m not saying they’re right or wrong. Nobody’s done it like we’ve done it. We’ve got absolutely no credit for it."

Swan then tried to move past the conversation on testing but Trump intervened.

"Excuse me, one thing I would say about testing. Because we test so much, we show cases... Other countries don’t test like we do, so they don’t show cases," he said.

"And in very short order, we got one test, we got another test," Trump added.

As the discussion on testing continued, Trump tried to make the point that America has more coronavirus cases because they are "so much better at testing than any other country in the world."

To which Swan replied, "The figure I look at is death. And death is going up now. It’s a thousand a day."

Trump then decided to pull out some colourful charts to attempt to try and prove his point.

"Well, right here, United States is lowest in numerous categories. We’re lower than the world," he said gesturing to a piece of paper.

"Lower than the world?" Swan replied.

"In what? In what?" Swan asked

"Why not as a proportion of population?" asked Swan.

Things continued to go back and forth for a while until Swan eventually reasoned, "I mean, a thousand Americans are dying a day. But I understand, on cases, it’s different."

"No but you’re not reporting it correctly, Jonathan," Trump responded.

Swan: “Why can’t I do that?” pic.twitter.com/MStySfkV39

Did you watch the full interview with Donald Trump and Jonathan Swan? Let us know your thoughts in the comments below.

Reply
Upvote
3 upvotes
This interview is like a Monty Python sketch.
I love that most Australians ( including Jonathan Swan) have fantastic bull-shit detectors.
Trump is increasingly befuddled and I wish that that was all he is but his corrupt history, childish ignorance and  fascist/racist mindset makes him too dangerous to occupy the USA's White House.
This interview exposes troubling flaws in the USA's Covid 19 response - mainly Trump himself.
L
laura__palmer 2 years ago