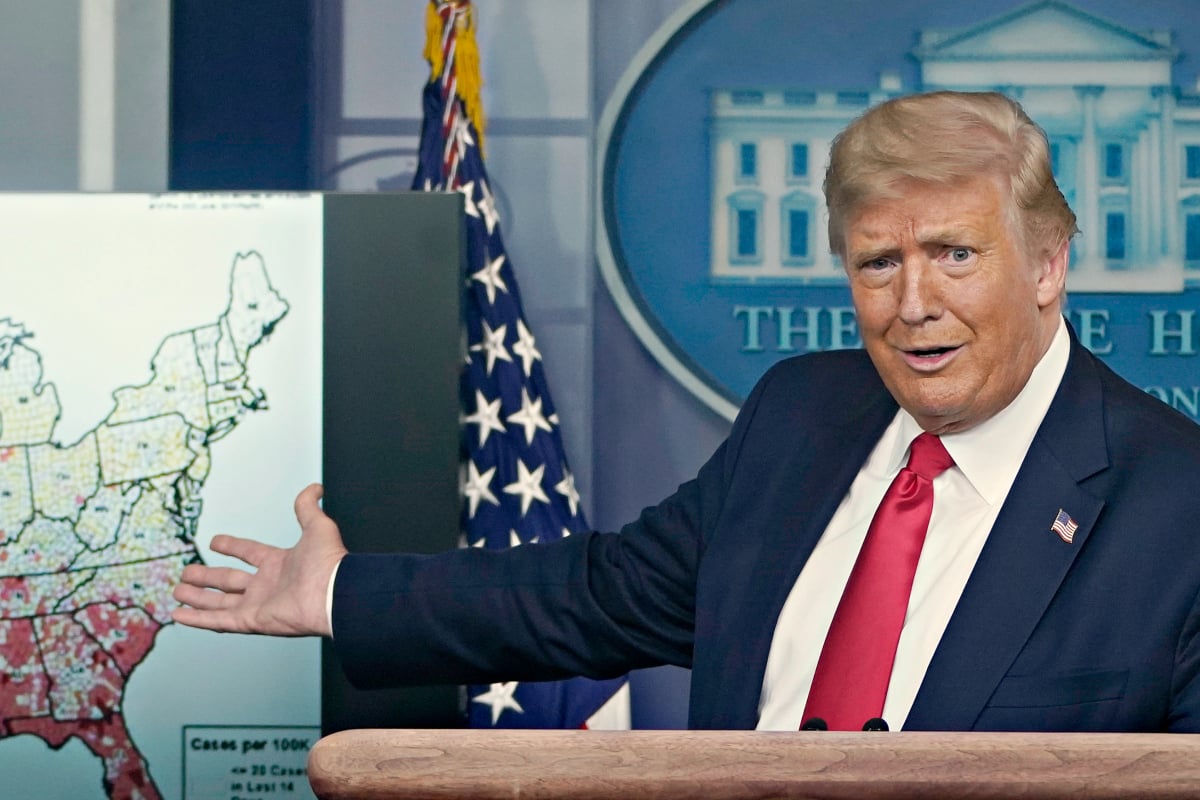 US President Donald Trump has been doing some rather abrupt backpedalling on COVID-19 over the past week or so.

Today, for example, the President announced that next month's Republican Party nominating convention in Florida would be scrapped. He said the timing of the four-day event, in which the party formally puts forward its presidential candidate for the November election, is "just not right with what's happened recently".

We also saw the resumption of his daily press briefings, which included an admission that "things will get worse before they get better" and sudden support for wearing masks.

Look, better late than never. But let's not be lulled into the misapprehension that the leader of the free world is finally taking the science on this pandemic seriously. Or that he's finally dropped the prejudicial or self-congratulatory language.

We are United in our effort to defeat the Invisible China Virus, and many people say that it is Patriotic to wear a face mask when you can’t socially distance. There is nobody more Patriotic than me, your favorite President! pic.twitter.com/iQOd1whktN

In fact, just days prior to making some actual sense, he also said the following....

That the US has the world's lowest COVID-19 mortality rate.

In a July 19 interview with the president, Fox News Sunday journalist, Chris Wallace, asserted that the US had the world's seventh-highest COVID-19 mortality rate (that is, the number of COVID-19 deaths per 100,000 in population).

But the president wasn't having a bar of it.

Wallace fact-checked his assertion, but President Trump doubled down with his... opinion: "I heard we had the best mortality rate," he pressed on. "Number-one low mortality rate."

Fox later claimed the president had been mistakenly referring to the "case fatality rate" (that is, the number of COVID-19 deaths per 100 positive cases). But even then, he'd be wrong. So wrong. The wrong...est.

According to Johns Hopkins University data cited by PolitiFact the following day, the US mortality rate was the third highest in the world, and the case fatality rate was equal ninth, with eleven countries recording lower.

By now, it's even worse: the US mortality rate is now in third, behind the United Kingdom and Chile.

Regardless, one would hope the president appreciates that those numbers represent actual human lives lost: over 146,000, as of Friday.

That people with the "sniffles" shouldn't be counted among positive cases.

Chris Wallace also challenged President Trump on his repeated assertion that the US caseload was only larger than other countries because it had conducted a larger number of tests.

The veteran reporter noted that, while testing has risen 37 per cent nationwide, positive cases have risen 194 per cent: "It isn’t just that the testing has gone up, but that the virus has spread; the positivity rate has increased, the virus is worse than it was."

To which President Trump responded with the equivalent of 'yeah, but nah'.

N.B., Mr President: people with mild 'sniffles', and even those who are asymptomatic, are capable of transmitting the SARS-CoV-2 virus that's responsible for COVID-19 infections.

That the US' top infectious disease specialist is an 'alarmist'.

In the same interview, the president then described Dr Anthony Fauci, Director of the National Institute of Allergy and Infectious Diseases, as "a little bit of an alarmist".

The relationship between Dr Fauci and the Whitehouse has been particularly tense in recent weeks, as the infectious disease specialist has repeatedly voiced concern about the decision to reopen the country in the midst of a surge in cases.

“People have their opinion about my reaction to things,"  Fauci said when asked about Trump’s characterisation of him. "I consider myself more of a realist than an alarmist."

The United States has so far recorded more than 4.1 million cases of COVID-19. More than one million of those have been recorded in the past 15 days alone, with the infection rate doubling in less than a month.