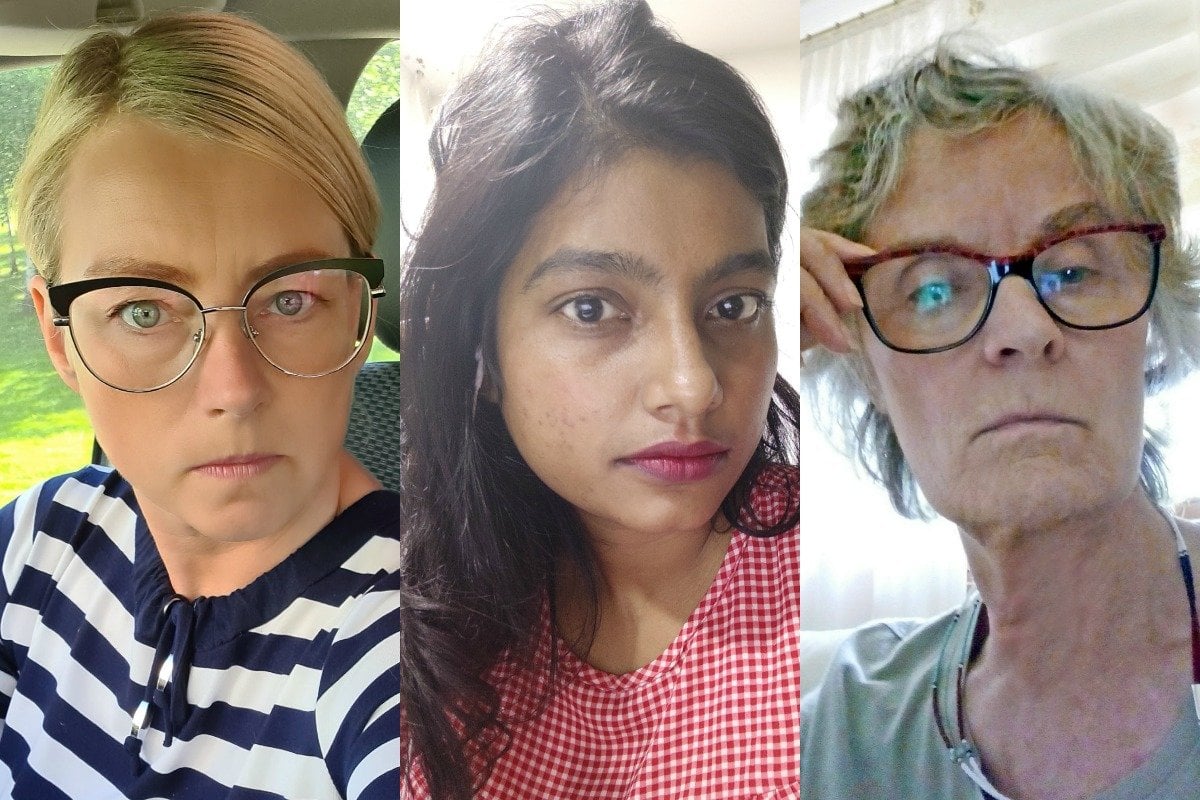 We've all have at least one person come into our home that we later regret inviting over. Whether they were rude, annoying or straight up disgusting - guests can seriously lack manners sometimes.

Today we asked 32 women to tell us about the most disrespectful thing someone has done at their house. And wow...

Sit down, grab some tea (or wine) and have a read.

These are a lot.

But first, hear Mamamia staffers confess to the weirdest place they've had sex. Post continues below.

"A friend had too many drinks and urinated on my very large and just cleaned and folded pile of clothes. He hasn’t come over since." - Lily.

"My mother-in-law once told me my curtains needed washing. She took them down and started washing them while I was dishing up dinner." - Anna.

"My father-in-law stayed over for a few nights and left skid marks on my sheets." - Lucy.

"Does my husband (long time ex!) having an affair with my best friend count? She was living with us at the time after she left her husband. Pretty disrespectful methinks." - Jackie.

"I let my brother stay at my house while I went to work and he had a girl over from Tinder. They then had sex on my bed and then in the shower in my ensuite. The bathroom was flooded and clothes were everywhere. Could have at least used my guest bed and bathroom." - Kate.

"My children have destroyed anything of value.. so RUDE." - Mary.

"I had a real estate agent have an open house in my rental which I was moving out of without telling me. I then got an email berating me for the mess I’d left for the inspection even though they didn’t tell me it was happening! I had my undies hanging up to dry that day and felt violated." - Emma.

"A friend of my dad's left a used condom on the main vanity in our bathroom." - Jane.

"Someone crapped on my bed and smeared it all over my walls... unfortunately, I also l birthed this person and he refuses to leave." - Ruth.

"My boyfriend's friend pissed in the hand basin instead of waiting to use the toilet. He also left the plug in so I had to don gloves to pull it out." - Josie.

"Friends came over for dinner after I’d just gotten home from having a c-section. Stayed for a roast dinner and let their kids absolutely trash the house." - Yov.

"I walked in through my front door to find my brother-in-law having sex on my dining table with his girlfriend." - Rita.

"Someone cut their pubes in my hand basin and it didn't wash down." - Lottie.

"I had a tradie smoke inside my house about 9 years ago. I was so shocked I walked so straight past but then did a double-take and went back to tell him to do it outside." - Jacinta.

"I had a housemate who used to make a cup of tea and take the teabag out and just drop it wherever she was: lounge room floor, dining table, bathroom, balcony. Splat. Teabags everywhere. Disgusting." - Christine.

"Had a small party and woke up the next morning to the toilet being blocked because someone had jammed a whole roll of toilet paper down the pipe." - Jules.

"Someone asked for an antihistamine because the dust in my house was really affecting her allergies." - Katrina.

"People had a food fight with handfuls of butter after a barbecue. I was cleaning it off the patio for a month afterwards!" - Ruby.

"My flatmate knew I was going out and bringing people back to our place afterwards. I prepared some beautiful platters (cheese, deli, fruit) and had them ready in the fridge. When we returned, she had invited people over and eaten it ALL." - Annie.

"My mother-in-law moves furniture around to how she prefers it." - Cassie.

"Someone did a huge poo in the bottom of our shower at a house party... and left it there." - Nikki.

"Walking in uninvited. Repeatedly. This was when I lived in Ireland. Apparently, it’s very common to do so. I begged my husband’s family to just text me first as I was breastfeeding and to be honest, I have huge boobs so I can’t do it discreetly. One day my father-in-law just marched into our house, threw the lounge room door open and saw me sitting... boob out... trying to adjust myself. He went bright red. Don’t recall him doing it again after that." - Natasha.

"Someone came over for dinner late, drunk and fell asleep on the couch and didn’t have dinner with us. It was his first time at our house." - Ashley.

"My Dad's girlfriend (who is a nurse) telling me I better start having babies because I'm geriatric. I'm 28." - Kelly.

"Someone went inside for a drink and came back into the garden wearing my clothes. Literally went through my walk-in wardrobe piece by piece. It was truly bizarre. Not a close girlfriend, either. More of an acquaintance." - Cathy.

"My mother-in-law offering me a pair of her own pants that she no longer wanted because she said, 'these are FAR too wide for MY legs'." - Caroline.

"Someone told me to be quiet because I was distracting their baby from eating." - Kirsten.

"I used to host a mum’s group at my house every week. I made smoothie ice creams for the kids and provided real coffees every week for the mums. Not once did anyone bring any milk, or anything to share with others. It was always left up to me. After every week for over twelve months, I lost my s**t after everyone left without an attempt at a cleanup. Wet wipes squished into half drunk coffees, a dirty nappy and food scraps left on the outdoor table. I made a post in the group, that after feeling incredibly used and taken for granted for over a year, I would be having a break and maybe someone else could host. They all got together and met in parks and my son and I weren’t invited. I was absolutely gutted. Three to four hours of activities, food and drinks for six to eight women and their kids every week, and they couldn’t be bothered inviting us to the park."- Deb.

"Got out the vacuum because my brother-in-law's (ex) girlfriend decided the floor needed cleaning!" - Terri.

"Lifted up a couch cushion, vomited, and put it back. Aaahhh, university." - Jess.

"A friend and her boyfriend (a stranger to us) visiting from abroad went shopping and bought himself new sneakers. All good, right? Except that when they left, I found his old stinky sneakers placed into the shoe box and pushed to the wall under our sofa. Ugh!" - Mary.

*Names have been changed to protect the privacy of the women who had to endure these guests.

Reply
Upvote
When my middle son was a teenager, he was way too kind and giving to his friends. We were living in a small two bedroom flat. He sneakily moved two of his friends into his bedroom. I just could not get rid of them. One was a Fijian guy and he paid his way and was fairly tidy. Although he did have the electric heater on constantly, which added to the electricity bill. When he finally moved out, I demanded that he paid me for the excess electricity charges.
The other guy was absolutely horrid. He was a skinny, whingeing, little white junkie. He only showered every two or three months. You could tell when he had, because the tiles around the shower/bath would have grey soap scum bubbles all over them. He sold some of my dvds that I had won in a competition. When he went to the toilet, he always left a layer of sloppy poo all over the back of the seat. He never ever cleaned up after himself. I had to permanently leave a spray bottle of strong disinfectant next to the toilet, so that I could clean it. I only charged each of them $50 a week to cover food and bills. One day, he was whinging and carrying on so much about our food being so called inedible, and could he just pay me $30 a week instead, and he would buy his own food. I let the whinger have his way. Well, in spite of this, he still ate our food anyway.
P
petal a year ago