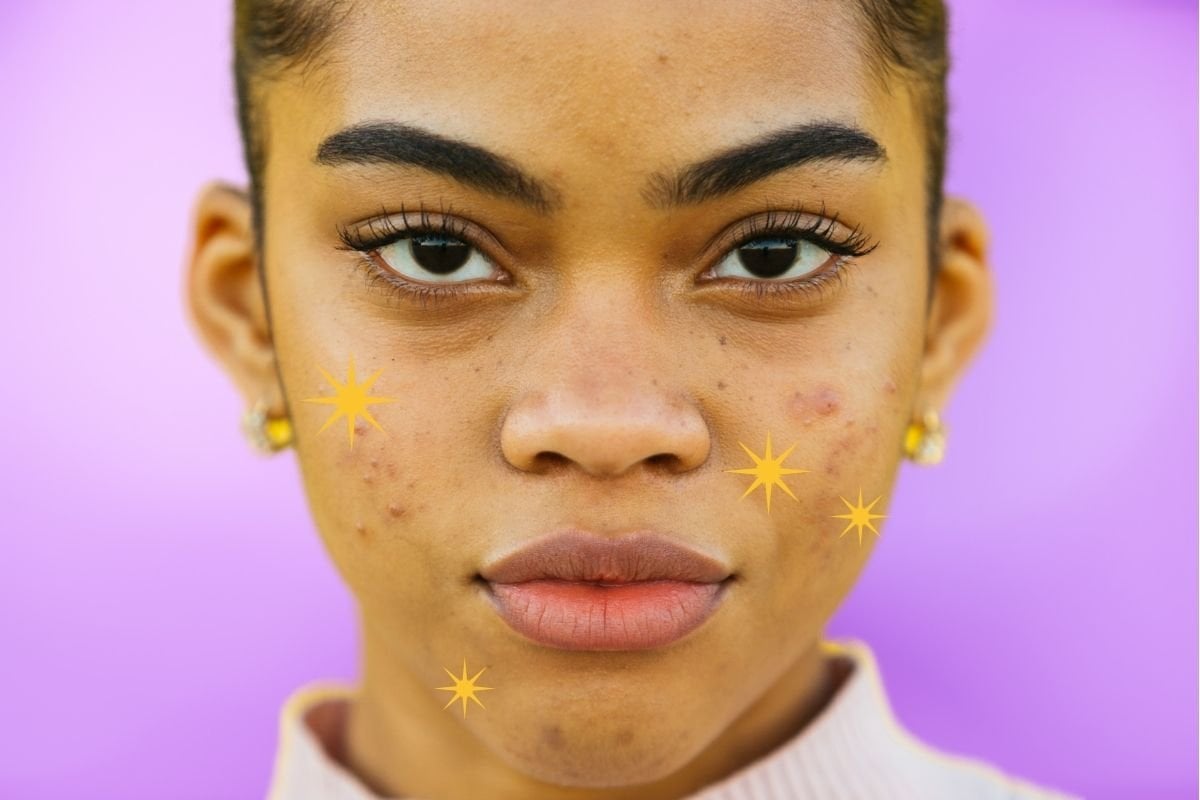 Your skin. She's a temperamental little thing, isn't she? And while it's easy to know when you need to up your moisture game or pull back on the acids, there's one thing that can be a bit confusing: breakouts.

Knowing why your face has suddenly been blessed with a party of pimples can be tricky to work out. Like, is it the new skincare products causing your skin to purge? Is it just your normal breakout? Cause you've been lazy with cleansing? Is it your hormones? IT'S THE HORMONES, RIGHT?

Watch: Want glowing skin? Course you do! Here's three ways to nab it. Post continues below.

So, which is it? We've pulled in an expert to find out.

We spoke to dermatologist Dr Cara McDonald from Complete Skin Specialists and asked her how to tell the difference between skin purging and breakouts.

What is skin purging?

You know when you treat yourself to some swanky new skincare products, only to find your skin just chucks a full on tanty and starts breaking out? Yeah? Sucks.

This is a skin purge, friend.

Listen: Struggling with hormonal acne? Here's everything you need to know about how to deal with it. Post continues below.

"Certain active ingredients will accelerate skin cell turnover resulting in faster shedding of cells on the surface which may also present as peeling or dryness," she said.

"Within the hair follicles though, the skin cells can clog up the pores resulting in a blockage and inflammation, similar to that seen in acne."

While it sounds like a 10/10 s**t time, a skin purge can actually have a heap of positive benefits to your skin. No, really! Would we make things up? You just gotta ride it out, friend.

What are the benefits of a skin purge?

A skin purge basically helps remove all the dirt and grime that’s hanging out beneath the surface of your skin - everything pretty much gets pushed to the surface.

Cause while a new product might seem like it's 'making' your skin break out, it's actually doing you a solid - so lay off it and let it do its job, ok?

"Skin purging occurs as your skin adjusts to the new products," explains Dr McDonald. "Following this though, the renewed skin with improved cell turnover will have a fresh, clearer, more luminous appearance with less congestion."

See, told you it comes good!

Plus, the side effects are also usually shorter than your standard breakout, so you're not going to be dealing with it *too* long. It's also a really good sign your products are actually working - which is always nice.

What's the difference between a skin purge and a breakout?

This is the tough bit. It's not always easy to work out when your skin is adjusting to a new product and when it's just freaking out and having a moment.

While it's kinda the same thing (they're both caused by excess oil and such), there are some key differences.

"Acne breakouts are also caused by excessive skin cells as well as oil within the pores, which then become infected with bacteria (known as c. acnes) and inflamed, causing pimples," explains Dr McDonald.

"In acne, the cause of the congestion within the hair follicle is commonly due to hormones and genetic factors which stimulate excessive skin cell turnover and oil production, particularly during puberty."

So, how do you tell them apart? Well, there are a couple of different things you can keep in mind - first of all, the duration is usually different.

As mentioned, skin purges will usually last for a shorter amount of time compared to your standard breakout. While a purge will take around six weeks (a full skin cycle) to heal and renew, breakouts can last way longer.

The location of your breakouts can also help narrow things down. Y'see, skin purges tend to occur in the 'usual' areas where you would normally breakout - so if it's in different areas, it's probably not a purge.

Skin purges also usually result from active ingredients, so if your skin is breaking out after using a new facial oil or sunscreen - it probably ain't a purge.

Hold up. What kinds of products might cause purging?

"The most common ingredients to cause skin purging are retinols, or vitamin A products," said Dr McDonald. "Other ingredients that stimulate skin cell turnover, such as acids and chemical peels, can also cause purging."

So, yeah - skin purging only happens with certain ingredients.

Basically, all those hardworking active products or ingredients that increase your cell turnover, exfoliate and bring congestion to the surface can cause skin purging.

Can you prevent your skin from purging?

According to Dr McDonald, unfortunately there is no way to completely prevent skin purging. Sorry :(

"Some people may avoid purging by introducing active ingredients very slowly, such as alternate day usage for the first month before slowly increasing frequency and quantity," she suggests.

Another tip? Don't go too crazy and introduce 2839 new active products at once.

"Avoid commencing more than one active ingredient at a time as this may exacerbate the problem."

When it comes to the best way to treat your skin during a purge, less is definitely more.

"If your skin is purging, use only calming, anti-inflammatory products until it passes."

Just remember: it's a good thing! It means your new skincare products are actually doing their job. And how good is it when that *actually* happens?