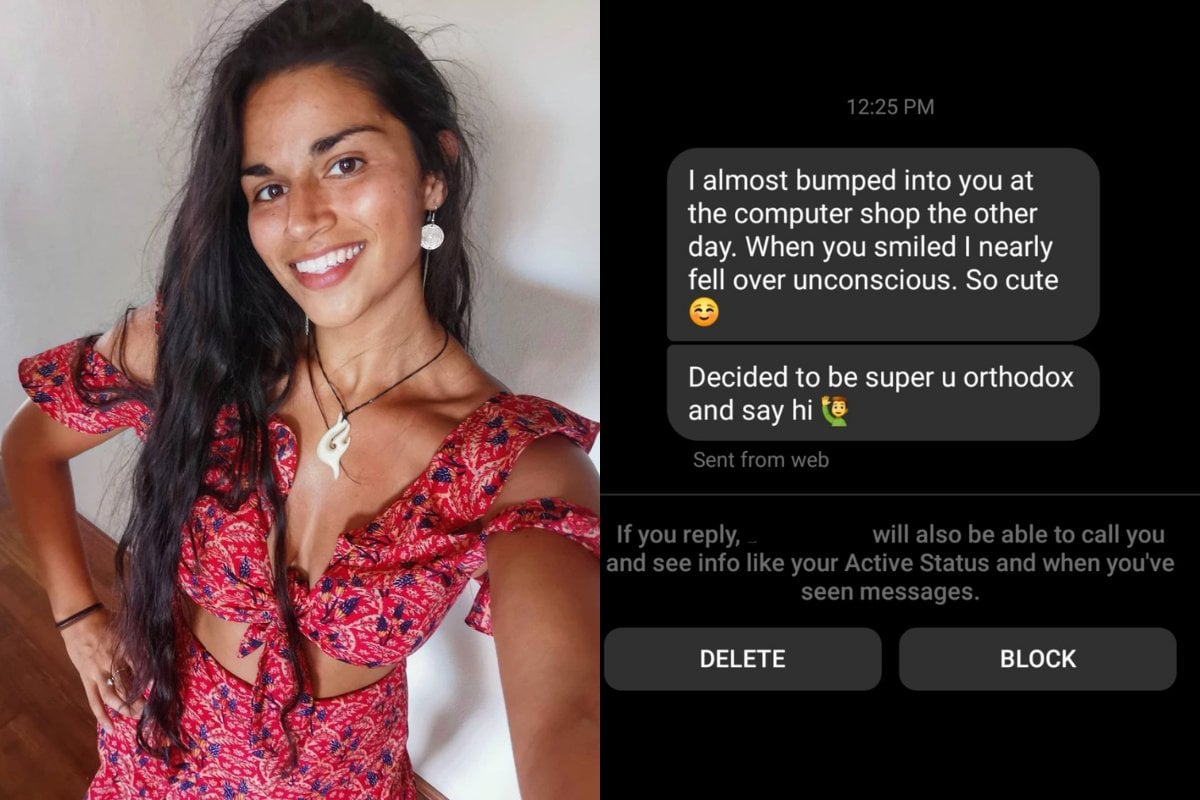 Let me preface by saying that the story I’m sharing today is just some food for thought. I am by no means forcing my reaction on anyone, and understand that each person will interpret the situation differently.

So, without further ado, let me tell you of a recent encounter in a computer shop a few weeks ago.

I had the first appointment of the day at a local computer store. As an obliging citizen in this global pandemic, I wore my mask upon entering and signed in. The strange thing was that the COVID-19 sign in sheet was in paper form. Weirdly counterintuitive for a computer shop, I thought.

Anyway, I signed into the shop with my full name, email and personal mobile number. Being the first customer, my name was at the top of the sheet. I handed over my laptop, chatted to the staff and then went on my merry way.

As I was leaving the store, a man was entering. He held the door for me to exit, I smiled and left. It was probably less than a two-second encounter.

Fast forward two days. I received a message request on Facebook. Weird, I thought. They’re always entertaining to check out. Usually they’re strangers spamming me and I delete them fairly quickly. I had an inkling it would be the same case this time around.

Guess again. It was the man who held the door open for me as I was leaving the computer store.

He sent me this: 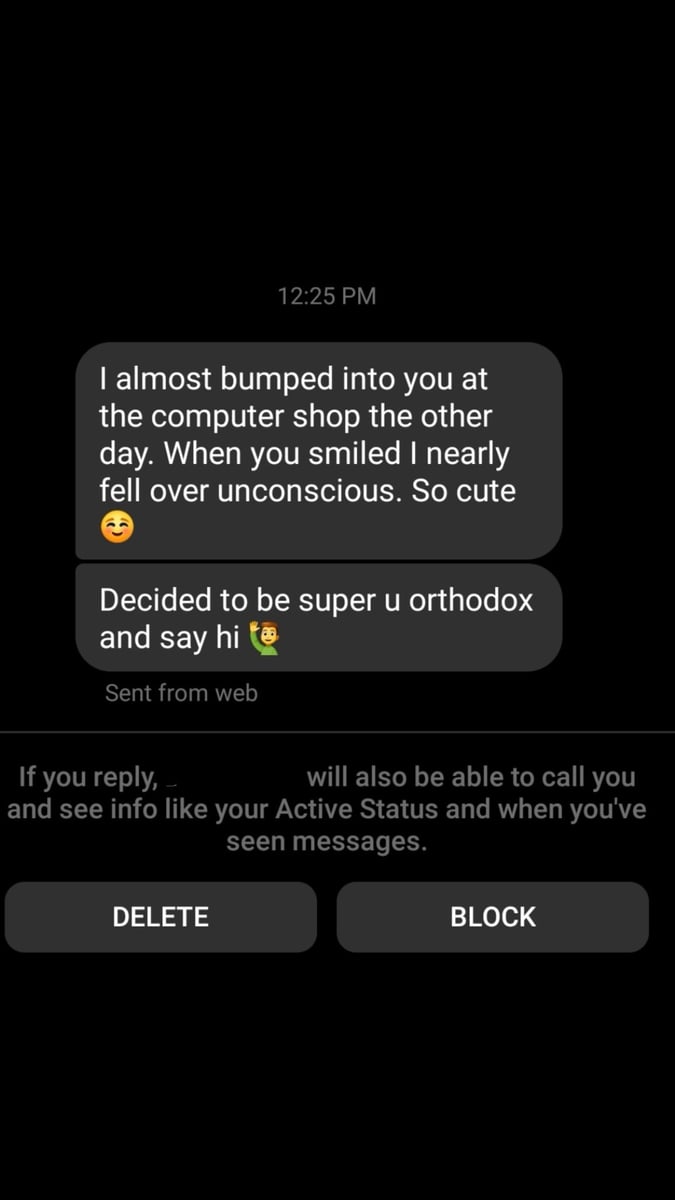 For a couple of seconds I was flabbergasted. How the hell did he find me?!

I was in the car with my friend at the time and showed her the message, pretty astonished. I explained that he must have recorded my name (and potentially email and mobile number) while he was signing in and found me on Facebook.

My initial instinct was to just ignore him and be done with it.

But a part of me wanted him to admit how he had obtained my personal information and contacted me in such an ‘unorthodox’ way, as he put it [sic].

So I responded with this: 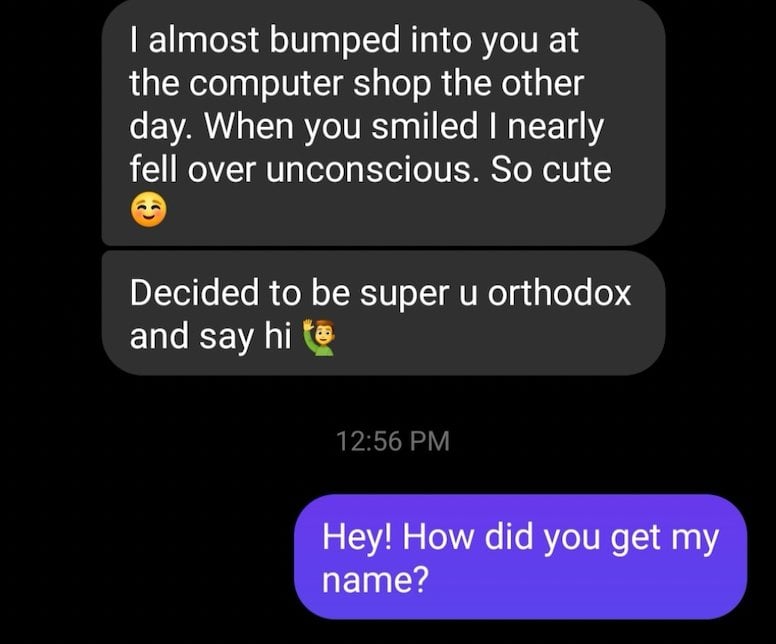 A few minutes later, he replied with this: 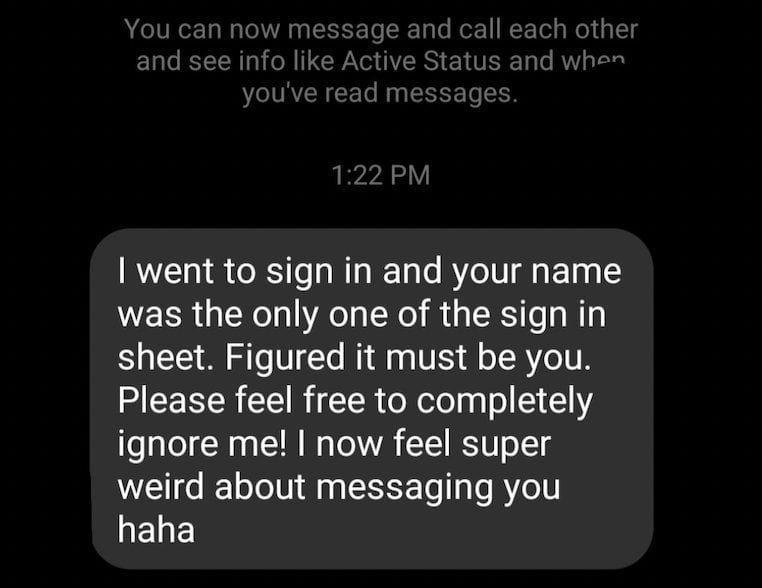 I didn’t respond and he sent this follow up: 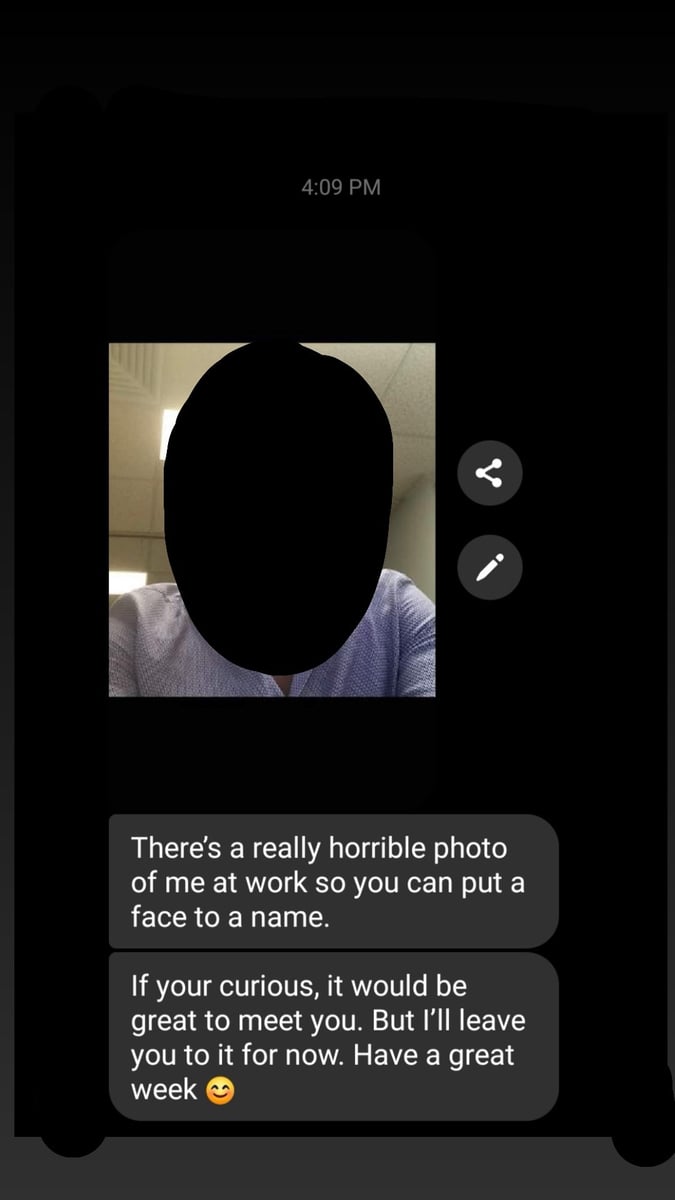 After receiving his in-real-time headshot, I proceeded to block him.

So, what do we think of this situation?

As I've thought more about it, I think it's a bit of a funny one.

Taking a step back, what exactly has happened here? A perfect stranger has obtained my personal and private information and exploited his access to it.

Were he that desperate, he had enough information to properly stalk me (obviously not saying that was his intention, but it’s just something to bear in mind).

In my view, he crossed the boundaries of personal privacy.

Strangely enough, this isn't the first time this has happened to me.

In Sicily, I was paying a bill which we had disputed as we had been overcharged. The waiter refused to listen to us and in the end, I just paid the amount with my credit card. Life’s too short.

About 20 minutes later, a message popped up in my Instagram account. It was the waiter. He said he had obtained my name from my credit card when I paid, taken a photo of the card and found me on Instagram because he thought I was ‘so beautiful’ and ‘couldn’t resist’.

Given our previous interaction, I was beyond affronted and furious that he would even dare to contact me.

That’s not even addressing how inappropriate it was to take a photo of my credit card which I had entrusted to his business for payment.

From these two experiences, I’ve reflected a bit on why I reacted so negatively to these attempts at ‘courting’ me.

First and foremost, I was just creeped out at both efforts of contacting me in such a covert way. Both men obtained my private information without my consent.

However, let’s look at it in a different light. If this were a romantic movie, such conduct could be deemed as dreamy and charming.

The guy would seem like the most valiant, romantic person, going to such great lengths to get in contact with a potential 'soul mate'. This sort of narrative is a classic in mainstream entertainment.

And yet, these Hollywood meet-cutes can often blur the line between courting and creepiness.

Take the movie Twilight for example. In a fair few scenes, Edward Cullen is literally sitting in Bella’s room watching her sleep. And due to sexual tension and an attractive cast, we think that it’s so exciting and charming.

In a later scene, he saves Bella from a sticky situation.  She discovers that he was purposely stalking her. Her reaction? Swooning over his purported acts of love and chivalry. My reaction is that if that escalated it would probably require a restraining order.

Stripped to the bare minimum, his behaviour is an over exertion of control and an invasion into Bella’s privacy. It was just ‘convenient’ that she was actually interested in him. Classic romance.

Another movie example is There’s Something About Mary. In this movie, Ben Stiller hires a private detective to stalk Mary (Cameron Diaz) and find out details about her. Romantic? I wouldn’t say so.

And dare I mention the Christmas favourite Love Actually?

I actually returned to the store a few days ago to pick up my laptop.

Just because I wanted to give them a heads up, I told the guy at the front desk what had happened. He was understanding and said that he would raise it with his superior and that what had happened was definitely not appropriate.

I know that in this day and age, we are expected to willingly hand over our right to privacy.

I understand that due to COVID-19 we all must do our bit to help the community, so I do not mind signing in. But sometimes it can take a toll, like with the computer store incident, and it’s something worth bearing in mind.

Maybe I am being overly analytical. Maybe this guy gave it his best shot and I should respect him for that.

I just know that I would have much preferred it if he had spoken to me first in person.

But he didn’t and something inside me found what he did instead fairly inappropriate. It’s not something that I would want happening as a regular occurrence.

Reply
Upvote
This has happened to me!!
I was due to meet my partner in the Phillipines on holiday but my flight arrived 12 hours before his! I was nervous anyway as I had never been to Manilla and it was very very busy etc.
Anyway I get to the hotel, check in and go up to my room and hope the next 12 hours go quickly as I just didnt feel very safe!
Next thing I know the male on the reception who had just signed me in had added me as a friend on Facebook! I was terrified!!
mrsp 9 days ago