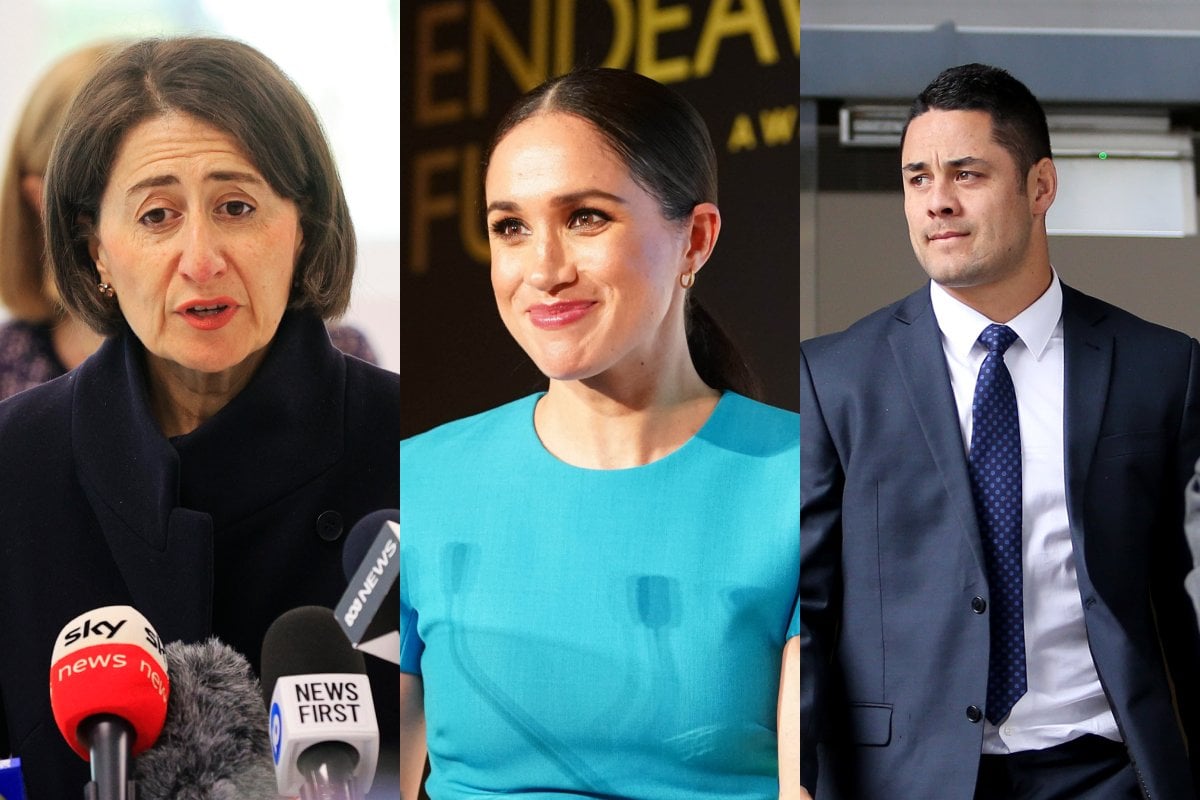 NSW Premier Gladys Berejiklian has warned more locally acquired COVID-19 cases are likely after a man from Sydney's east picked up the virus.

Ms Berejiklian on Wednesday said the man in his 50s has not recently travelled overseas, does not work in a hotel quarantine, border or a health role and has no idea where he caught the coronavirus.

He also has not recently travelled interstate.

NSW Health can advise that new venues of concern have been identified and others have been updated as part of ongoing investigations into a COVID-19 case reported earlier today. pic.twitter.com/dhtFBkrcdm

The man's positive result was recorded on Wednesday morning and NSW Health believe he has been infectious since last Friday.

"We have to assume there's other cases and our response will be proportionate as it always has been in NSW," Ms Berejiklian told reporters.

"Everybody in the state needs to be on high alert.

"Anybody anywhere with the mildest of symptoms needs to come forward and get tested."

NSW Health contract tracers are working to identify any contacts and genome sequencing is underway, with results expected on Thursday.

The man has a number of close contacts who are being tested and are isolating, NSW Chief Health Officer Kerry Chant says.

He also visited a number of venues while potentially infectious, she said, but had been meticulous about checking in using QR codes.

Despite NSW's mystery COVID case, states and territories have left their doors open.
Isolate, get tested, and quarantine if you have been to any of the exposure sites, check them here: https://t.co/fjTPAAykE6 #9Today pic.twitter.com/j2InC5lTsz

A list of venues of concern has been compiled which includes a number of barbecue stores in Silverwater, Annandale and Casula, a meat store in Bondi Junction and a petrol station in Mascot.

The man also attended a screening of The Courier at Event Cinemas Bondi Junction on Friday before attending Figo Restaurant at Rushcutters Bay.

Later on Wednesday, new venues were listed including District Brasserie restaurant in the Sydney CBD, Barbetta restaurant in Paddington, Azure Cafe in Moore Park, HineSight Optometrist inside the Sofitel Sydney Wentworth, The Royal Sydney Golf Club at Rose Bay plus the Chemist Warehouse and Woolworths in Double Bay.

People who have attended those venues at various times between April 30 and May 4 should get tested and self-isolate until they receive further advice.

"This person did everything right, but it goes to show that we can't take a single thing for granted," Ms Berejiklian said.

The man has not yet received a COVID-19 vaccine.

Ms Berejiklian also said it was too early to say if NSW's coronavirus-related restrictions need to be tightened.

On Wednesday evening, NSW Health reported that fragments of the virus had been detected in the Marrickville sewage network.

A big-spending budget aimed at reviving the coalition's flagging fortunes with women is set to chart the Morrison government's course to the next election.

Polling shows women's support for the coalition eroded on the back of rolling scandals, heightening pressure on the need to back up words with action in the budget.

The politics and economics of next Tuesday night https://t.co/wUFpHeeJbM #ausecon #ausbiz #auspol #Budget2021

While recent months elevated women's issues, the coalition was also on the back foot over women after the October budget.

Senior ministers attempted to defend scant specific commitments by arguing improvements to roads and tax cuts benefited almost everyone regardless of gender.

With the opposition sensing increasing volumes of blood in the water, expect a laser focus on women in Albanese's budget reply speech.

Labor will also needle the Liberals and Nationals on the vaccine rollout, arguing economic recovery is at risk with Australia falling behind other nations on jab administration.

The budget could be the coalition's last before sending voters to the polls, with May 21 next year the last possible date for a regular election.

Four men have faced court on multiple charges after allegedly submitting former cricket star Stuart MacGill to a kidnapping ordeal so frightening he waited almost a week to go to police.

MacGill was allegedly forced into a car at Cremorne on Sydney's north shore at about 8pm on April 14.

He was then taken to a remote location at Bringelly in Sydney's southwest, police say, where three assailants allegedly tried to extort money from the 50-year-old.

About an hour later, MacGill was driven 45 minutes' away to Belmore, where he was dumped.

MacGill sustained minor injuries but did not require medical treatment.

The men allegedly involved were arrested in dawn raids on Wednesday, and faced court later that day.

Son Minh Nguyen, 42, Marino Sotiropoulos, 46, and Frederick and Richard Schaaf, 27 and 29, did not apply for bail.

Sotiropoulos is the brother of MacGill's ex-partner.

All men face one kidnapping charge of taking and detaining a person in company to get advantage and occasion actual bodily harm.

Nguyen has additionally been charged with knowingly directing the activities of a criminal group, while Sotiropoulos faces one count for supplying a prohibited drug of a large commercial quantity.

The Schaaf brothers also face a charge each of participating in a criminal group contributing to criminal activity.

Detective Acting Superintendent Anthony Holton said MacGill had only been held for an hour at the property, but it would have been a "frightful hour" and a "horribly traumatic experience".

Police say they will be "closely monitoring" MacGill's welfare.

Two-time NRL player-of-the-year Jarryd Hayne will face a pre-sentence hearing for sexual assault, amid a prospect his bail could be revoked.

Hayne, whose multi-code career included stints at the Parramatta Eels, San Francisco 49ers and Fiji rugby sevens team, is due to face Newcastle District Court on Thursday, six weeks after he was found guilty of two counts of sexual intercourse without consent.

Former NRL superstar Jarryd Hayne will face his sentencing hearing today. He was found guilty in March of sexually assaulting a woman and faces a maximum possible sentence of 14 years in jail.

He continues to deny any wrongdoing. #9Today pic.twitter.com/unsiTydLRa

A Sydney jury in March found he attacked a then-26-year-old woman in her home in 2018 after she said "no" to sex.

After the jury verdicts, Judge Helen Syme noted a jail term was "inevitable" for the 33-year-old and strengthened his bail conditions.

They include daily reporting to police, a $50,000 surety and a ban on leaving his local area on the Central Coast except for specific reasons.

Police thanked the "amazing, courageous and resilient" victim for going through the court process.

US plans to back waiver for vaccine intellectual property.

US President Joe Biden says he plans to back a World Trade Organisation waiver for vaccine intellectual property and would talk about it later in the day.

"Yes, I'm going to talk about that later today, yes," Biden told reporters in reply to a question about whether he intended to back the waiver, after he gave a speech regarding his proposed "American Rescue Plan".

The United States and several other countries have thus far blocked negotiations at the World Trade Organisation, about a proposal led by India and South Africa, that would waive the IP rights of pharmaceutical companies to allow developing countries to produce COVID-19 vaccines.

The Commonwealth's outbound travel ban is a breach of human rights and has no public health benefit, a conservative non-profit group will argue in a bid to have the Federal Court overturn the decision.

LibertyWorks - a group that professes to support free speech, natural rights and free markets - in December launched a legal challenge to Australia's travel ban, which on Thursday will be heard by a full Federal Court bench.

The conservative group argues the ban is a "fundamental breach" of human rights, and that Health Minister Greg Hunt does not have the power under the Biosecurity Act to legally enforce it.

Outbound travel without a special exemption from the Department of Home Affairs - with the exception of New Zealand - has been banned for more than 12 months due to the COVID-19 pandemic.

Should LibertyWorks' legal challenge fail, the outbound travel ban will remain in place until at least June 17, at which point Mr Hunt will have the option to extend it further.

Meghan Markle, the Duchess of Sussex, has won her outstanding copyright claim against a British tabloid, after London's High Court heard neither Queen Elizabeth nor a former senior royal aide claimed ownership of a letter she had written to her estranged father.

Markle, 39, wife of the monarch's grandson Prince Harry, won a privacy action against the Mail on Sunday in February after it printed parts of the letter she sent to her father Thomas Markle in August 2018.

Meghan, Duchess of Sussex wins remainder of copyright claim against Mail on Sunday over publication of letter to her estranged father https://t.co/wGol9B6czn

While she won much of her claim without needing a trial, judge Mark Warby had said the issue of who owned copyright to the letter still needed to be decided because of the possible involvement of senior aides.

The newspaper had argued the duchess intended the letter's contents to become public and that it formed part of a media strategy because she had worked on electronic drafts with her communications secretary Jason Knauf, meaning both he and "the Crown" might have a claim to the copyright.

However, at a remote hearing at London's High Court on Wednesday, Warby issued a summary judgement in her favour on the copyright issue.

- Canada has approved the use of the Pfizer COVID-19 vaccine for children aged 12-15.

- A Malian woman has given birth to nine babies in Morocco on Tuesday, after only expecting seven. "The newborns (five girls and four boys) and the mother are all doing well," Mali's health minister said in a statement.

- Facebook's oversight board has upheld the company's suspension of former US President Donald Trump, but says an indefinite ban from the platform was "not appropriate", giving the company six months to determine a "proportionate response".

Reply
Upvote
1 upvotes
Gladys needs to be careful her words don’t come back to bite her. She said if this was QLD or WA they would shut down the whole city.  I hope her decision, to not have balls doesn’t damage us all. With Gladys it has always been good luck rather than good management. She is a piece of work that one.

Reply
Upvote
1 upvotes
@gypsy it’s not good luck, the NSW contact tracing system is genuinely excellent. If it wasn’t the Northern Beaches outbreak would have been a disaster.

Reply
Upvote
@cat  I absolutely agree the NSW contact tracers are excellent but she won’t be tough and that is why we had the Ruby Princess  disaster.  She drags her feet like Morrison and has a swipe at ones that are strict. She wants to be everyone’s mate. She does what Morrison wants she won’t stand up to him.