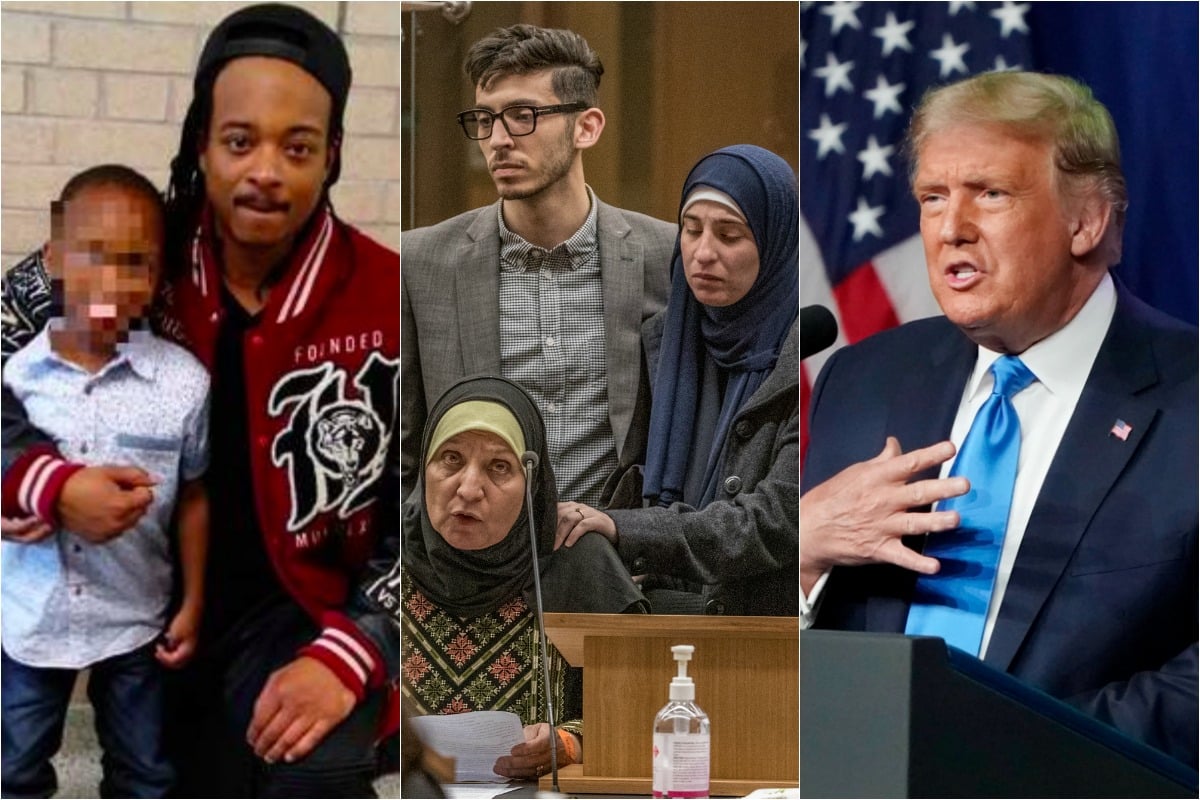 A Hong Kong man who recovered from COVID-19 has been infected again four-and-a-half months later in the first documented instance of human re-infection.

The findings indicate the disease, which has killed more than 800,000 people worldwide, may continue to spread amongst the global population despite herd immunity.

The 33-year-old male was cleared of COVID-19 and discharged from a hospital in April, but tested positive again after returning from Spain via Britain on August 15.

Hong Kong scientists report case of man reinfected with coronavirus four and a half months after his first bout - the world's first proven case of reinfectionhttps://t.co/dTc5MQ6bxx

The patient had appeared to be previously healthy, researchers said in a paper, which was accepted by the international medical journal Clinical Infectious Diseases.

He was found to have contracted a different coronavirus strain from the one he had previously contracted and remained asymptomatic for the second infection.

"The finding does not mean taking vaccines will be useless," Dr. Kai-Wang To, one of the leading authors of the paper, told Reuters.

"Immunity induced by vaccination can be different from those induced by natural infection," To said. "We will need to wait for the results of the vaccine trials to see if how effective vaccines are."

Black Lives Matter protests fire up over another unarmed shooting.

Protests have erupted in the US state of Wisconsin following a police shooting of a reportedly unarmed black man, prompting officials to impose a curfew in the city of Kenosha.

The man was hospitalised in a serious condition on Sunday evening after police shot him multiple times, local media reported. 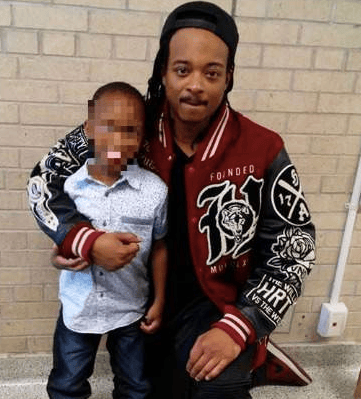 Jacob Blake, 29, was shot “in the back multiple times.” Image: Facebook.

Crowds gathered at the scene and threw bricks and Molotov cocktails at police, according to reports in social media.

The victim has been identified as Jacob Blake by Wisconsin Governor Tony Evers in a tweet. "We stand against excessive use of force and immediate escalation when engaging with Black Wisconsinites," the governor wrote.

A video circulating on social media and cited by the US press showed the man walking towards a car followed by two officers and one of them shooting him as he opens the car door.

Tonight, Jacob Blake was shot in the back multiple times, in broad daylight, in Kenosha, Wisconsin. Kathy and I join his family, friends, and neighbors in hoping earnestly that he will not succumb to his injuries.

Victims tell Christchurch terrorist: you have united us.

Two dozen victims of the Christchurch Mosque terror attacks gave their victim impact statements at the High Court on Monday.

Gamal Fouda, the Imam at Al Noor mosque, where 44 worshippers were killed in last year's shooting, led the tributes to the dead.

"The actions of the terrorist have changed Christchurch and New Zealand," Mr Fouda told the court. "If you have done anything ... the community is closer with your evil actions." 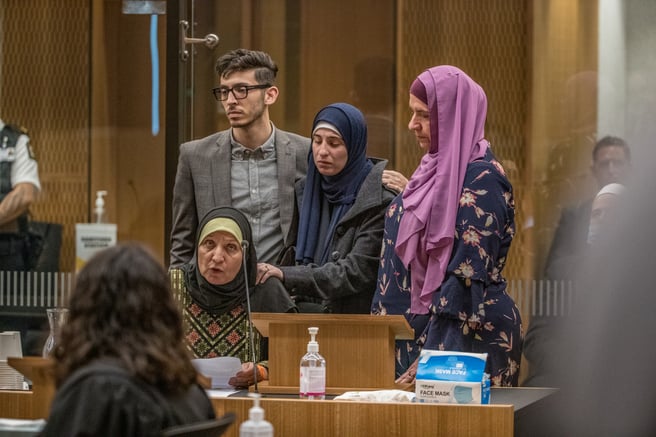 Speaking through an interpreter, Khaled Majed Abdel Rauf Alnobani said: "I have felt disappointment for not being able to help more people. What happened was so unexpected and I still feel shocked by what I saw," he said. "I have not returned to regular work because I am struggling with everyday life."

"We have become more united. You have made that. And thank you for that," he told the terrorist.

Saira Bibi Patel was with her husband Musa Vali Suleman Patel at the Linwood Islamic Centre during the attack.

"I knew that we were going to die within seconds ... I put my arms around my husband so we could die together," she said in a pre-recorded statement from Melbourne.

"It was extremely painful to feel so helpless while watching your soulmate breathe his last breath. Now I am in imprisonment with my sadness and I hate that I am called a widow," she said.

READ: Brenton Tarrant is standing trial. Here's why reporting in the courtroom is being blocked.

Guard did food deliveries with COVID-19.

A security guard who contracted COVID-19 while working in Victoria's hotel quarantine program made food deliveries while infectious.

The man, known only as Security 16 for legal reasons, began developing symptoms while working night shift at the Rydges on Swanston in May.

The hotel has been identified as the source of 90 per cent of current COVID-19 cases in Victoria, after a family of four tested positive to the virus following their return from overseas on May 9.

"I did not tell anyone at the Rydges hotel that I felt unwell. I thought it was just a common cold and nothing to worry about," he said in his submission to the hotel quarantine inquiry on Monday.

After the shift, he went to hospital for a COVID-19 test and was told to stay home, but after feeling "a bit better", he dropped off three to four orders for a food delivery company.

The man received his positive diagnosis the following day and self-isolated for 14 days. But once the two weeks were over he resumed making food deliveries.

Just one day later, he was back in hospital, where he returned another positive test.

Premier Andrews: Wants to extend state of emergency until September 2021.

Victoria recorded 116 new coronavirus cases yesterday, the lowest daily tally since July 5. But despite the reduction in numbers Premier Daniel Andrews wants Victoria to remain in a state of emergency until September next year.

Andrews said on Monday he would ask parliament to extend the allowable period for a state of emergency to 12 months, and then renew it, but the state opposition has indicated it will not support the proposed extension.

Victoria's state of emergency is set to expire on September 13. Premier Daniel Andrews announced today legislation to allow it to be extended for a further 12 months. pic.twitter.com/3vrtOWE8Hx

New South Wales recorded three new cases on Monday, only one of which was acquired locally. Queensland and WA recorded one case each.

The Gunner Labor government has claimed victory in the Northern Territory election after a campaign dominated by COVID-19 and the economy.

The latest count from the Northern Territory Electoral Commission confirms Labor will hold at least 13 seats in the 25-member assembly.

Chief Minister Michael Gunner said he did not see victory "as a reward, but as a renewal of our responsibilities to Territorians".

"In backing Labor, you chose the future over the past. You chose stability and certainty. You chose strong and secure borders. You chose jobs, not cuts," he said in a statement posted on Facebook.

CLP leader Lia Finocchiaro said in a statement: "I called Michael Gunner a short time ago to congratulate him and the Labor Party on winning the election, and urged him to move immediately to take real action on the economy," she said.

"The rhetoric from the Gunner government about 'saving jobs and savings lives' needs to stop and tangible action must be taken without delay."

Former prime minister John Howard has undergone an operation at a Sydney hospital after a sudden attack of appendicitis and is said to be recovering well.

It is understood the 81-year-old ex-Liberal leader visited a doctor who advised him to take an ambulance to hospital.

Mr Howard was treated for a heart condition in 2015 when he had two stents inserted. 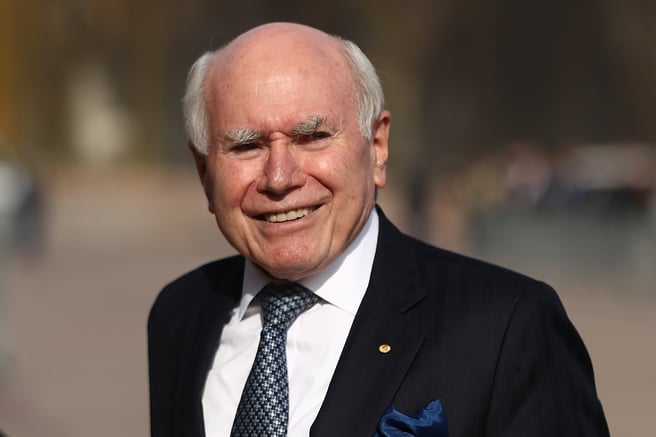 John Howard is recovering in hospital from a sudden attack of appendicitis. Image: Mark Metcalfe/Getty.

President Donald Trump adopted a grim tone in remarks to Republicans who formally backed his bid for a second term on Monday, warning without evidence that he could face a "rigged election" in November.

Trump repeated his claim that voting by mail, a longstanding feature of American elections that is expected to be far more common during the coronavirus pandemic, could lead to an increase in fraud.

Trump spoke in an unscheduled appearance on the first day of the sharply scaled-back Republican National Convention in Charlotte, North Carolina, after he received enough votes to formally win the nomination to take on his Democratic rival, former Vice President Joe Biden, in the November 3 election. 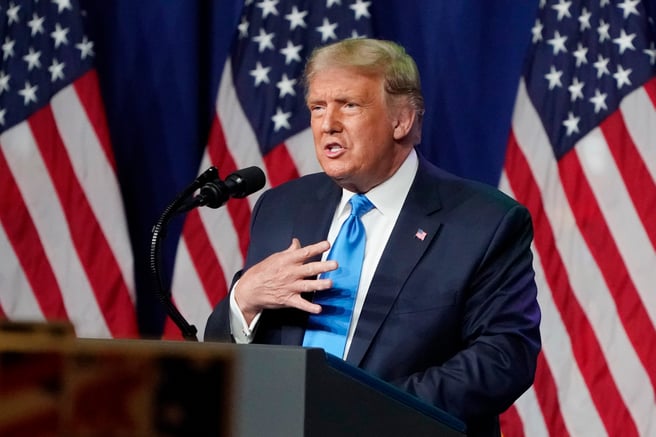 "The only way they can take this election away from us is if this is a rigged election," Trump said. "We're going to win this election."

As he has done repeatedly, Trump described states' responses to infections of COVID-19 in starkly partisan terms, casting lockdowns and other steps recommended by public health officials as attempts to influence voting in November.

"What they're doing is using COVID to steal an election," Trump said. "They're using COVID to defraud the American people - all of our people - of a fair and free election."

All the Radical Left Democrats are trying to do with the Post Office hearings is blame the Republicans for the FRAUD that will occur because of the 51 Million Ballots that are being sent to people who have not even requested them. They are setting the table for a BIG MESS!

- Bali has postponed a plan to welcome international tourists back from September 11, due to rising numbers of coronavirus in the country.

- The Auckland COVID-19 cluster is now at 150, with the city's lockdown extended until Sunday night.

Reply
Upvote
2 upvotes
If Trump loses, they are going to have a hard time getting him out of the Office, I think. That's what all this voter fraud rhetoric is in aid of: allowing him to cry foul if the votes don't go his way.
R
rush 2 years ago

Reply
Upvote
2 upvotes
@laura__palmer I am fully expecting to see news footage of him being hog-tied and physically carried out of the building by the Secret Service. If he loses, it's going to be an absolute shit-show.
C
cat 2 years ago

Reply
Upvote
4 upvotes
@rush I’m counting on this, what a glorious idea. I think he’s going to win again though, legally or otherwise.
L
laura__palmer 2 years ago

Reply
Upvote
1 upvotes
@cat I don't want him to with every fibre of my being, but I think he's going to win again, too.
L
laura__palmer 2 years ago