This article deals with an account of miscarriage that could be triggering for some readers.

It is a word that no prospective mother wants to say. It is also a world of grief and heartache, despair and anguish, self-doubting and self-loathing that no prospective mother wants to share. And yet the reality is that as many as one in four pregnancies before 20 weeks will result in miscarriage, and the statistics could be even higher (for those additional mums to be who may not have known they were pregnant).

Our modern western society seems willing and able to share every other social issue that is a part of our everyday, in print, on TV, and in social media. And yet, we have nothing to offer those who are bereaved by miscarriage. There are no rituals, no “loss of pregnancy” or “miscarriage” cards of condolence to sign, no special bouquets of flowers to send, and no “right words” to share. Because we often don’t talk about miscarriage, we also often don’t know how to respond when our loved ones miscarry. And more often than not, we won’t even know that our loved ones were pregnant. It remains a silent word, and a silent grief that seems impossible to share.

When my husband and I started trying for a family, we both felt that becoming pregnant would happen easily and naturally, and that it wouldn’t be long before we could share the news with our family and friends – that we were pregnant – but the optimism was to be short lived.

After several months, we found that getting pregnant was a lot harder than we had thought. Over many months, it became an agonising process, where all romance and hope was lost. I couldn’t think of anything else. Over time, I appreciated how desperate people could become in their quest to have a baby. I had joined their club.

I saw my doctor who advised that we should only keep trying for a few more months before we investigated fertility treatment. Remarkably, a short time later, I fell pregnant and we were ecstatic.

I had the home pregnancy test to prove it. Even so, I wasn’t going to take any chances, and I had a blood pregnancy test to confirm the result. I was so proud of myself. We decided that we wouldn’t share our news with anyone, until we had reached the end of the first trimester. Week 13 seemed a lifetime away.

Some weeks later, we miscarried. It was the most emotionally agonising experience that had come from nowhere. I told myself I was stupid for thinking that we would be parents with our first pregnancy. And yet, I also felt that I didn’t deserve this quiet tragedy.

The hardest thing of all was that our pregnancy had been our secret, so it made the miscarriage hard to share. Miscarriage is such an awful phenomenon. Since the causes are still mostly unknown, it is like a curse, and something that no one wants to talk about.

I found it incredibly hard to talk about my experience to anyone. It was also the enormity of the loss, which had been made worse by the fact that we had been trying for many months to conceive, and I had become completely fixated with the notion of getting pregnant.

In our efforts to have our family, I end up having a total of four miscarriages. Each miscarriage was heartbreaking. But I also found that our first miscarriage was not nearly as devastating as later miscarriages. It was as if we became more deserving of good luck, the longer we spent trying to get pregnant. And the longer that I stayed pregnant for. I also thought that I must surely be entitled to some measure of good fortune since I had already suffered one, and then two, and then three miscarriages. I could not believe that lady luck would not be on my side.

Our last miscarriage was also our worst. We had reached the end of the first trimester and shared our tentative news with family and friends. We were also preparing for a family wedding. The day before the wedding, we went for another ultrasound scan with my obstetrician, and were told the dreaded news. Our baby no longer had a heartbeat. We had miscarried. We were devastated. Totally bereft. Upset and numb that our hopes had been truly dashed, again.

Time seemed to turn on us. We were so looking forward to the wedding, but we now had to attend the celebrations, knowing that I had miscarried. And that I was carrying a baby who had tried so hard to grow and to live, but who had died. I was in a total void. I had been pregnant for over 13 weeks, but I was suddenly pregnant no longer. And a trip to the hospital (for all the wrong reasons) still awaited me after the wedding. It was the absolute pits.

We decided that we wouldn’t tell our family about our miscarriage until after the wedding. But our secret made me feel very isolated and alone. Whilst we both loved the wedding, which was a great success, I couldn’t wait to take my leave and disappear to the sanctuary of our home and our bed. It was without doubt, the hardest grief from my miscarriages, that I seemingly had to endure.

Despite our multiple miscarriages, we now feel very blessed to have three beautiful, healthy, young children, each of whom really is the apple of our eye. In our house we have two rules, everyone gets the same number of hugs, and everyone is loved equally. There are no favourites.

Having tried to conceive naturally, we ultimately went through IVF treatment, not once, but twice, to have our oldest girl, and our younger boy girl twins. It was an arduous journey, and on many occasions I questioned whether I had the emotional strength to keep going. But every second was worth it, for the absolute pleasure and privilege that we now get to enjoy, for the rest of our lives, as their parents.

As heartbreaking as miscarriage is, the statistics show that most women who suffer a miscarriage will go on to have a healthy pregnancy, and a healthy baby. It is my great wish that as a modern society, we can learn to communicate the heartache and despair of our miscarriages with others, so that we will also learn from each other that it really is possible to survive miscarriage, and to become parents.

Lisa Gallate is the author of “Hitting My Reset: A Memoir on Grief and How to Make it Fit Your Life” available here. 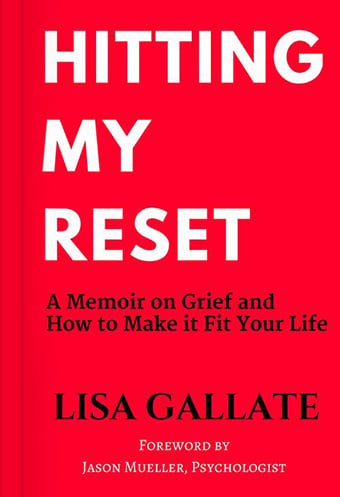