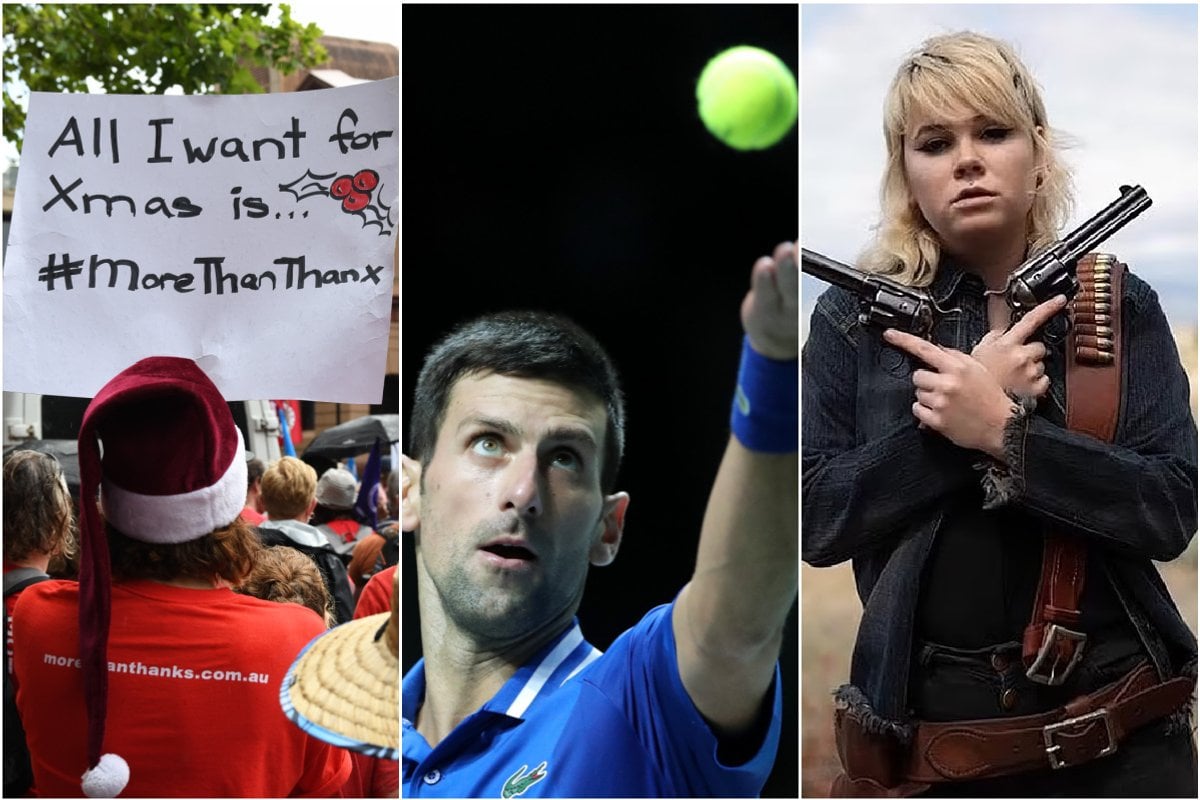 Chinese hackers have been thwarted minutes before they shut down power to more than three million Australian homes.

The Daily Telegraph has revealed that the sneak cyber attack on November 27 on Queensland's CS Energy, was only stopped at the last minute before it had the potential to shut down the company’s two thermal coal plants.

We're being warned attacks like these could become common, and could potentially be used to limit our ability to respond in a military crisis.

As the Telegraph reports, the number of cyber attacks being directed at Australia have reached a "disturbing" level.

Novak Djokovic has been named in the Serbian line-up for next January's ATP Cup team event, raising firm hopes the world No.1 will play in the Australian Open despite allegedly being unvaccinated.

Organisers have trumpeted that 18 of the world's top 20 players will take part in the 16-nation tournament in Sydney from January 1-9, with Djokovic leading the top-seeded Serbians.

Djokovic hadn't publicly committed to defending his Australian Open title at Melbourne Park or revealed his vaccination status, with a mandate that he be double-jabbed to play.

Novak Djokovic will travel to Australia in January amid ongoing speculation about his vaccination status. So will he bypass quarantine or get jabbed? https://t.co/Y8TwWMqwhC

But according to the Herald Sun, Djokovic has grounds for a medical exemption, that could also see him avoid 14-days quarantine.

While the ATP Cup doesn't have the same entry criteria, his inclusion for the Open warm-up tournament means he now appears likely to chase a 10th crown.

Djokovic's father this week slammed the Victorian vaccination mandate, likening it to "blackmail."

NSW residents have been warned to brace for more industrial action after thousands of public school teachers and transport workers walked off the job in a bid to improve pay and conditions.

For the first time in nearly a decade, thousands of striking teachers converged on NSW Parliament on Tuesday, calling on the government to address heavy workloads, uncompetitive salaries and staff shortages.

Many wore red t-shirts and carried placards supporting the NSW Teachers Federation, which organised the action that closed almost 400 state schools for 24 hours.

Read more: "I am one of the public school teachers striking in NSW today. We are not okay."

The union wants a pay increase up to 7.5 per cent a year to reverse what it says it a decline in teachers' wages compared to other professions.

There has been widespread disruption across NSW as teachers strike over conditions and stagnant wages after almost two years of keeping the state going through the pandemic. Angelo Gavrielatos from the @TeachersFed explains.#TheProjectTV pic.twitter.com/Vn936Dbm5j

"Not for your attendance here today but rather for what you do every day, for your public service, what you do for the kids in your classroom ... I thank you, I salute you," he said.

NSW Education Minister Sarah Mitchell said she was disappointed at the disruption, taking aim at the union and saying teachers had been offered a 2.5 per cent wage increase, the maximum the government can offer under its public sector wages policy.

The industrial upheaval coincided with a campaign by metropolitan bus and train drivers that hit Sydney's transport network as well as train services to the Hunter Valley, Blue Mountains and Central Coast.

What an extraordinary day.

Over 50,000 teachers, rail workers and bus drivers stood up to the Government, went on strike and demanded a better working life.

This is people using their collective power to put their working life and destiny in their own hands.

Bus drivers in Sydney's inner west continued a strike from Monday and were joined by drivers from Sydney's southwest, demanding government contractor Transit Systems negotiate over what workers say is an unfair two-tier wage system.

At the same time, train drivers refused to operate foreign-made trains that run three-quarters of the services on the Sydney network, resulting in fewer services and trains making additional station stops.

World No.1 Ash Barty has been named WTA Player of the Year for the second time following her success at Wimbledon.

It is the second time the Australian has won the award, made by the women's game's governing body and voted by members of the international media. She also won in 2019.

Barty won a tour-leading five titles this year including the second grand slam trophy of her career at Wimbledon, where she beat Czech Karolina Pliskova in the final.

She also defended her title at Miami and triumphed in Melbourne, Stuttgart and Cincinnati to secure her third year-end No.1 ranking in a row.

The father of the 24-year-old armourer in charge of all weapons on the set of the film Rust, thinks sabotage was behind the fatal shooting of cinematographer Halyna Hutchins.

Hannah Gutierrez-Reed followed in her dad's footsteps who was an armourer and weapons specialist on a number of big films, with dad Thell Reed exclusively telling ABC News, "She knows what to do... She does the job as good as I do now."

Gutierrez-Reed has come under scrutiny in the wake of the on October 21, 2021 accidental shooting.

Sharpshooter and movie consultant Thell Reed tells @ABC News he's not concerned about the possibility that his 24-year-old daughter, Hannah Gutierrez-Reed, could go to jail. https://t.co/rmSkhd6kL6

But Thell says "sabotage is the most likely possibility, probability... somebody wanted to cause a safety incident on set. Nobody wanted anybody to be killed. We developed evidence of motive for that - why they might've wanted to do that, why Hannah might've been a target - and that's all gone to the sheriff and we're asking for that to be completed before any decisions are made on charging."

He says he's not concerned about the possibility of his daughter going to jail, and says they'd had discussions about the fact she was being expected to do two jobs on set - armourer and prop assistant.

READ: "I didn't pull the trigger." What we learnt from Alec Baldwin's first interview.

- Travel bans to control COVID-19 are ineffective and will not stop omicron, the World Health Organisation (WHO) has reiterated, as it urged countries to stick to tried and tested methods.

- The International Olympic Committee has ruled out postponing the Beijing Winter Olympics under any circumstances related to the COVID-19 pandemic.

- One of the suspected killers of Saudi journalist Jamal Khashoggi has been arrested at Roissy airport near Paris as he was about to board a flight to Riyadh, sources say.

- Israel has announced the completion of a sensor-equipped underground wall on its side of the Gaza border, a counter-measure developed after Hamas militants used tunnels to blindside its troops in a 2014 war.

Reply
Upvote
Not sure the armourer gets to pass on responsibility even if it was sabotage. It was still her job to secure all the guns and ammo against sabotage.

Reply
Upvote
2 upvotes
'But Thell says "sabotage is the most likely possibility, probability... somebody wanted to cause a safety incident on set. Nobody wanted anybody to be killed. We developed evidence of motive for that - why they might've wanted to do that, why Hannah might've been a target - and that's all gone to the sheriff and we're asking for that to be completed before any decisions are made on charging."'
America - when in a corner, concoct a wild conspiracy theory, run it up the flagpole, nowadays, someone'll salute. "Yeah, sabotage IS the most likely scenario and everything else is fake news".
Not.