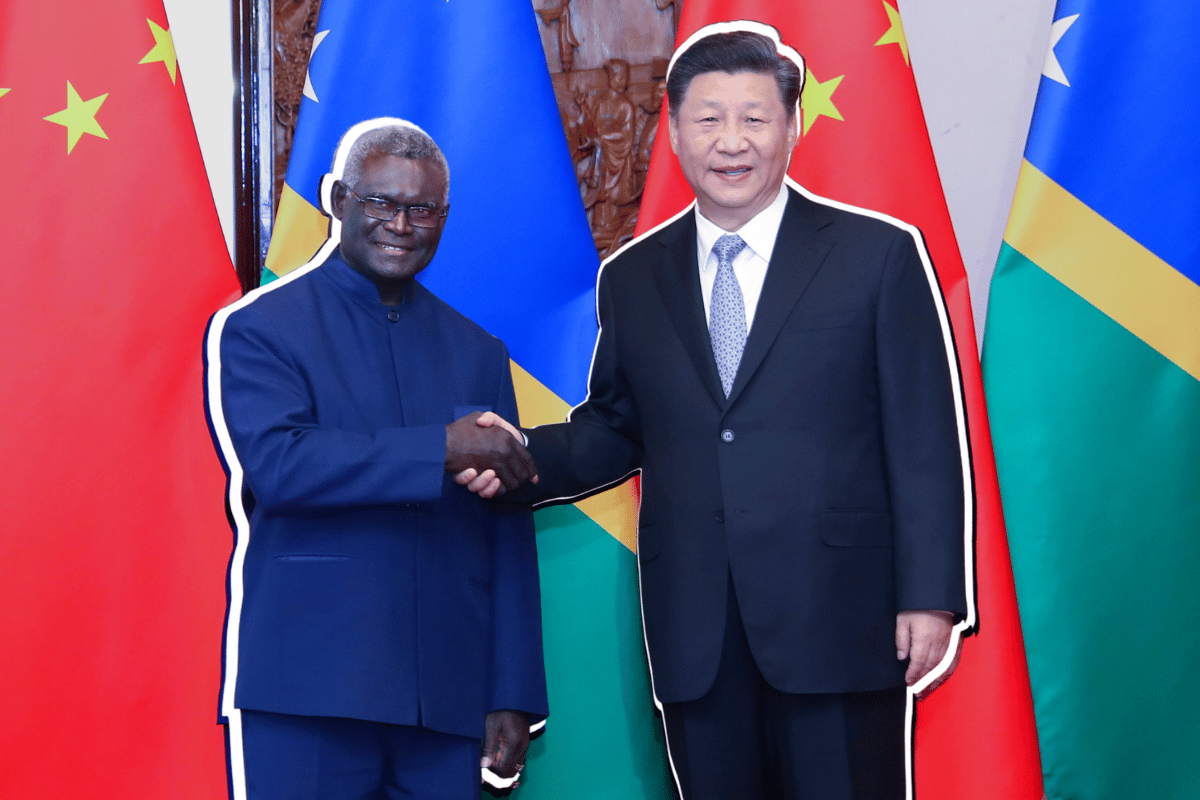 Tensions are high across the globe currently, and in the Indo-Pacific region specifically, there's one key issue that everyone is talking about. And it has to do with the deal made between China and the Solomon Islands.

Over the past couple of weeks, there has been concern about a new security deal that the Solomon Islands have signed with China - even though we don't know very much about what the deal actually contains.

Nonetheless, many critics have suggested that it represents a massive failing on the part of Australia's Federal Government that more wasn't done to stop this deal. The concern is that this deal could potentially threaten our national security with China's increasing influence in the region.

So, to unpack why many seem to feel angry about the deal, Mamamia's daily news podcast The Quicky spoke to two experts in this area to find out what exactly the deal may entail and how it could affect Australia.

Watch: Get to know Mamamia's daily news podcast The Quicky. Post continues below.

Where exactly are the Solomon Islands in relation to Australia?

The Solomon Islands are actually pretty close to Australia's doorstep. They are located just 2,117km from Brisbane, which is about the same distance between Brisbane to Adelaide.

Made up of nearly 1,000 islands, the Solomon Islands have a population of under one million. And like Australia, they have been colonised by many European powers across history.

Over the years, Australia and the Solomon Islands have had an overall supportive relationship - especially when it comes to distributing aid and assistance to the Islands. We also have strong economic ties through trade and investment - lots of Aussie firms, including ANZ Bank, operate over there.

But in 2013, Australia's military contingent withdrew. And over the next few years, Australia's government continued to show support and aid - although it did slowly decrease funding.

The deal between China and the Solomon Islands.

It took some by surprise when it was announced that the Solomon Islands' Prime Minister Manasseh Sogavare had entered into talks with China to sign a security pact - the details of which remain mostly confidential.

So why exactly did this happen? And should Australia have done more to stop the Solomon Islands from turning elsewhere for support?

Mark Kenny is an Australian Studies Professor at the Australian National University's College of Arts and Social Sciences, and host of the weekly politics and public affairs podcast, Democracy Sausage With Mark Kenny.

And according to Kenny, Australia's response to climate change plays a big role in this story.

"They along with many other Pacific nations have complained about Australia's laggard approach to climate change, which for them is an existential question," Kenny shared on The Quicky.

Essentially, many believe Australia could repair its relationship with the Pacific by responding to the region's grave concerns about global warming. Many of these nations are made up of low-lying islands, so if sea levels are to rise even by a fraction, they will bear a significant brunt.

"From their perspective what do they get from Australia? A Prime Minister that waves coal around in the parliament. That's one level of it - Australia's refusal to be taking [climate change] seriously," Kenny explained.

"Morrison put a lot of effort into preferably removing references to climate change in the communications with Pacific Islands Forum meetings, and that doesn't go down well."

This is an astonishing intervention in an election campaign from Australia’s former spy chief (and Solomon Islands expert) Nick Warner accusing this government of “sleepwalking” since 2015 on Chinese ambitions in the Pacific. #ausvotes https://t.co/9LWZtERjQv

The appeal of China.

On the other hand, another factor that likely influenced Prime Minister Sogavare's decision to make a deal with Chinese President Xi Jinping, is money.

"China is very cashed up - they have lots of money and power which can make some promises in very favourable ways to the Solomon Islands," Kenny said.

"What the Solomon Islands is demonstrating is the Australian Government can take people for granted. When China is prepared to fund the Solomon Islands, take them seriously, treat them with respect - 'not like poor cousins' - it makes a difference."

So what will the impact be of our very close neighbours becoming friendlier with an authoritarian regime?

The concern some have over the deal.

As for the impact of this deal in the Indo-Pacific region, O'Brien said there are a number of factors to consider. But the one she is most "concerned" about is the potential destabilisation of the Solomon Islands and their autonomy. Because if China begins to establish themselves in new ways in the Solomon Islands, it may increase China's influence and threat level to Australia.

"Both the United States and Australia have said this week they will take action and respond if China does establish themselves in the Solomon Islands," Professor O'Brien told The Quicky.

"It's high stakes, and it's high tensions. People have drawn these lines, and if these lines get crossed, it is yet unclear what the consequences will be."

Australia's Defence Minister Peter Dutton said last week: "The only way you can preserve peace is to prepare for war and be strong as a country, not to cower, not to be on bended knee and be weak."

Peter Dutton has warned "the only way that you can preserve peace is to prepare for war" as concerns grow over China's actions in the region.https://t.co/elSJ8RCRzP

He was referencing relations in the Indo-Pacific region and China's growing influence. And this topic has since become a point of discussion and debate between the two major political parties in Australia in the lead up to the election, with both suggesting different strategies.

So, is this 'prepare for war' rhetoric accurate for Australia?

Professor O'Brien said it was more of a "nightmare" outlook and one that was particularly alarmist.

"To hear our Defence Minister use those words - words that need to be used with extreme caution - it has escalated tensions. And words really matter, particularly when you're in a position like the Defence Minister is in. If war were to occur, it would be a frightening scenario," she said on The Quicky.

"The talk of war is something we need to think about and remember how terrible World War II was. We don't want to go back there. It's an extremely dangerous path to go down."

What will happen now?

As far as the impact of the deal on the Australian election, some have labelled it the biggest foreign policy blunder on Australia's part since World War II.

As Kenny told The Quicky, "The neglect in the region and the failure to send Australia's Foreign Minister or perhaps having the Prime Minister actively engaging with the Solomon Islands through this period represents a big negative for the government.

"A lot of voters won't get too concerned one way or another whose fault it is, but they will focus on the fact China is getting closer, and maybe vote for the party that will act the toughest. And that's the irony, that the mistake the Coalition made, might work in their favour for the election."

Ultimately, more will need to be done to improve relations. And as many experts have pointed out, rather than "megaphone diplomacy" and "alarmist language" leaders should instead create opportunities for respectful dialogue and foreign policy amendments.

Because the stability of the Indo-Pacific region relies on that.