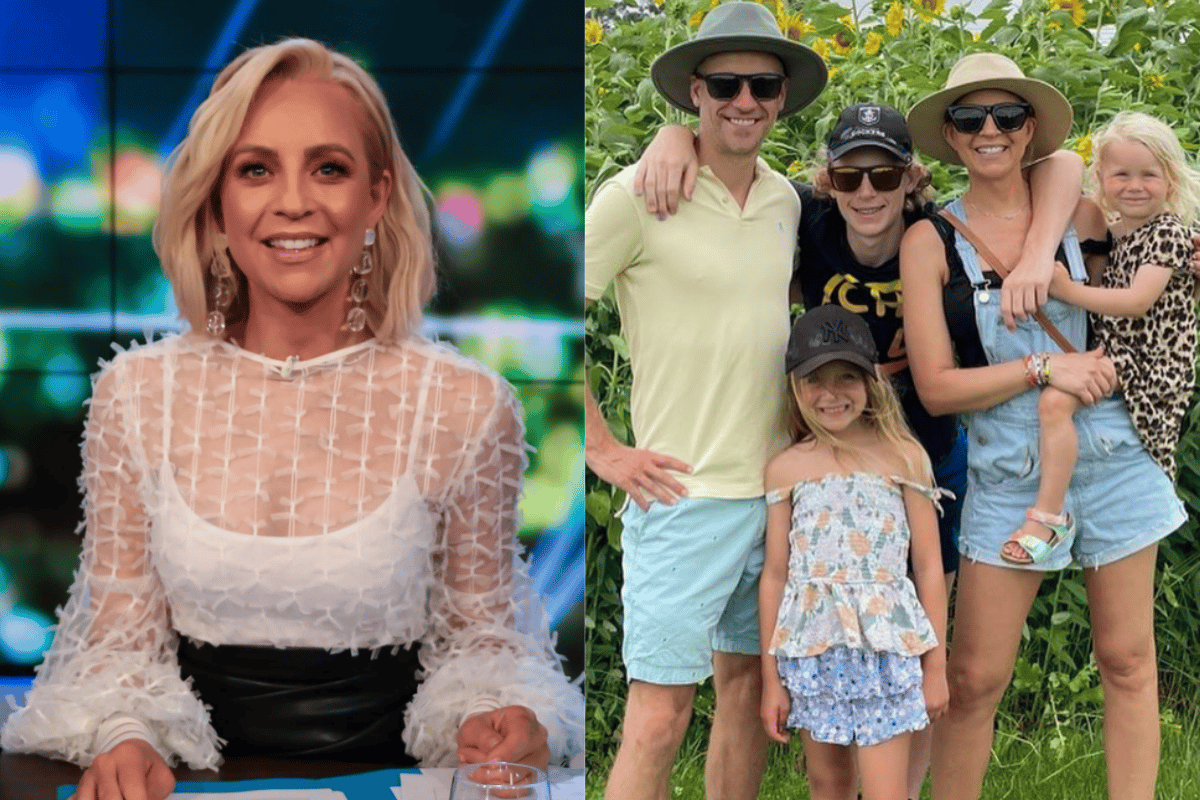 Carrie Bickmore has graced our screens as a co-host on The Project for over ten years, and is a household name throughout Aussie homes.

She's been open and honest with her TV audience about the personal challenges she has faced, including the death of her first husband Greg Lange - the dad of her son, Ollie - to brain cancer.

Bickmore has since found love again and given birth to two daughters with her partner, Chris, and regularly shares some very relatable parenting snaps on her socials.

But Bickmore has also been open about just how grueling Melbourne's lockdown was for her and her family. So she decided to make a big change, which she announced on The Project on Tuesday night.

Carrie Bickmore talks about her family on Anh's Brush with Fame. Post continues below.

Bickmore first met Greg Lange at university in Perth, the couple then deciding to move to Melbourne in their early 20s. But then their world turned upside down when Lange was diagnosed with brain cancer in 2001.

She recalled on Anh's Brush With Fame: "They diagnosed him about a year after we moved to Melbourne. I was still 21 or 22 and he was about 25. He had a seizure at home and then one thing led to another. In your 20s that's the last thing you can… I didn't know anyone that had cancer, I didn't know anything about brain cancer, neither did he. It just completely threw everything we knew, everything we had planned, it threw everything on its head. It was the start of an incredibly hard journey."

In 2005, the pair married. Two years later, they welcomed son Oliver Lange. Reflecting, Bickmore said the best thing that the couple chose to do together before his death, was having their son Ollie.

On December 27, 2010, Lange died at just 34 years old. He had lived with the cancer for almost a decade. It was understandably an incredibly hard time for Bickmore, Ollie and Lange's family.

In 2016, Bickmore said to the Australian Women's Weekly: "Over ten years, I watched him suffer multiple seizures a day, lose feeling down one side of his body, saw his three-year-old push him in his wheelchair because he couldn't walk anymore. It changes who you are, your ability to dream, to look forward… I spent so many years feeling no hope."

In May 2015, five years after Lange had passed away, Bickmore won the prestigious Gold Logie at the TV Week Logie awards, which she dedicated to Lange. In her acceptance speech, Bickmore ignited the charity Carrie's Beanies 4 Brain Cancer, to raise much needed money and awareness for brain cancer research and support. Thus far, the charity has raised millions and millions of dollars. 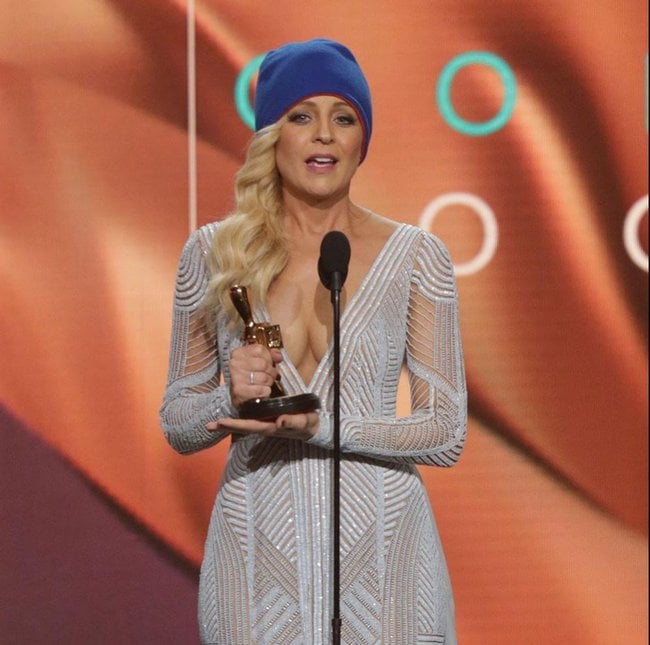 For Bickmore, her ultimate hope is to fund research that will end brain cancer, a future where no family like hers has to experience loss as a result of the disease.

"He [Lange] would have loved it, he would have absolutely loved it. It blew me away. I kind of just wish he could have seen all these messages from people to have realised how many people were going through a similar thing and we weren't alone," she said.

"He's a gorgeous boy and he’s so much like [Lange] in so many ways. This sounds so weird but often I’ll see him in the shower, the back of his body, and his frame is just a miniature version of Greg. They’re very, very similar. Greg will forever be in my current life. Every time I look at my son, I'm seeing Greg."

2015 was a special year for Bickmore for another reason, as in the same year she gave birth to her daughter Evie, with partner Chris Walker.

Bickmore had met Walker a few years prior, while he was a then-producer on The Project. Speaking about how they first bonded, Bickmore told TV Week: "He, like many people, understands loss and suffered his own loss in life and I think he just has a huge amount of compassion and he will always be incredibly supportive of me and for our family."

And after experiencing a traumatic birth with Ollie, Bickmore previously said she didn't necessarily think having more kids was in her future. But when Evie came along, everything felt right.

She said to Anh Do: "I see Ollie and her together and it literally makes my heart sing. For him, that he might not have gotten to have a brother or sister and they're like two peas in a pod. 'Cos he's so much older than her, he's just so protective. She's going to have that for life, that big brother,"

Then in 2018, Bickmore and Walker welcomed another baby girl, Adelaide, called Addie for short.

But like for so many mums, the weeks and months that followed giving birth were difficult for Bickmore. She wrote for Stellar Magazine that her "third stint at motherhood" had been "one of the most challenging periods of my life".

Sharing the everyday highs and lows of parenting via Instagram, one of Bickmore's posts that people connected with most was an 'Instagram versus reality' image, with fans thanking Bickmore for her "realness".

And then COVID came along!

Speaking to Mamamia about what lockdown was like for her family - especially given the fact they live in Melbourne - Bickmore said it had been exhausting to say the least.

She said to Mamamia: "I'm usually woken by my two-year-old around 5:30am. My morning routine has been a little different this year due to lockdown, but the mornings are still a bit manic in our house. To be honest, there isn't a lot of time to unwind. Usually at the end of the day once the kids are in bed Chris and I will pop on a show on TV, but I am lucky if I am still awake by the end of the episode! It's very annoying for Chris because I spend the next episode asking what I have missed. It's been a tiring few years."

Which is why it wasn't a huge surprise when Bickmore announced on The Project that she and her family were going to take a much-needed break and spend a few months abroad.

"Chris and I and the kids are heading off on a family adventure together. We figure it's never going to be the perfect time to go and it's something we really want to do before my son starts his final years at school, so we're doing term two in the UK. So I will be off for a couple of months."

She went on to explain that this has been "something we have dreamed of for a while now", adding that after 13 years on The Project desk, she's in need of a bit of "long-service leave".

Bickmore also said she had taken inspiration from fellow panellist Kate Langbroek, who went to Italy with her own family for two years.

"We [my family and I] had some big conversations after living through the world's longest lockdown. One of the things that my son Ollie said was how much he was going to miss the family time when we were coming out of lockdown, which kind of surprised us because we had a lot of family time!"

Elaborating on Instagram, Bickmore said: "One of the unexpected silver linings to come out of living through Melbourne's lockdowns was the extended family time and we feel like this is our last chance to do something like this together before Ollie hits the pointy end of his schooling and no longer wants to hang out with us."

Of course, Bickmore will return to the newsdesk in a few months' time and she will continue to remotely co-host her afternoon radio show with comedian Tommy Little.