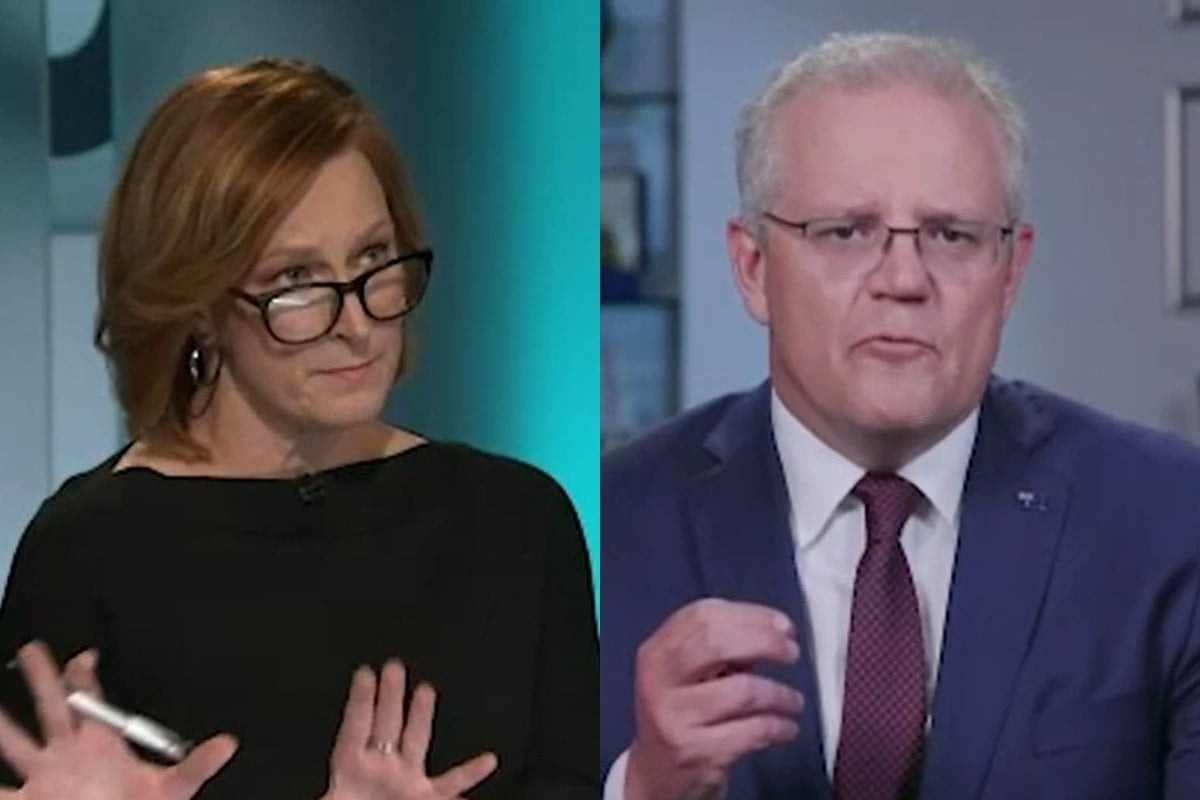 Targeted funding for about 3000 providers in Victoria is being extended until January and parents across the rest of the country will be given easier activity test requirements until April.

But there were no major funding commitments or new initiatives for the early education sector, which was among the hardest hit by the coronavirus-induced recession.

Treasurer Josh Frydenberg on women in the workforce. Post continues below video.

Video via Parliament of Australia.

In an interview with 7.30 on Wednesday night, Sales asked if the government's plan to create one million new jobs had forgotten families,

"There's no additional funding for childcare. Who do you think is going to look after the children of the new workers?," Sales asked.

"We have put in significant amounts during the course of this COVID-recession to ensure the childcare operators have been able to come through this recession," Morrison began, before Sales cut him off.

"No, no, I'm talking about, you want to create a million new jobs. Where are those workers going to put their kids?" she said.

In his response, Morrison pointed to previous record participation for women in the economy - which resulted in the interview going in a direction the prime minister didn't see coming.

"Why do you assume I'm talking about women?" Sales interjected. "Men are parents too."

Morrison said he wasn't disagreeing with that, and was pointing out how his government's previous childcare rebates had seen "not just women's participation soar," but the overall participation rate in the economy increase.

Morrison said the current childcare system should be able to support the children of one million new workers, as those jobs were intended to replace those that had been lost throughout the pandemic.

Various economists and interest groups floated free child care as a way to help more women re-enter the workforce, but Morrison shut the idea down.

"Leigh, if you're suggesting we should have free childcare for everybody, well that's not something we are proposing," he said.

Free childcare was offered earlier in the pandemic, but has since been axed.

Labor has indicated childcare will be included when Anthony Albanese delivers his alternative budget on Thursday.

"It may come as some surprise to the leader of the opposition, but women run small businesses,” the Prime Minister said.

We asked the Prime Minister why his Budget had no new support for childcare at a time when families are struggling more than ever.

He refused to even answer. pic.twitter.com/dJHGv45w8G

Albanese dismissed reports Labor will offer free childcare for low income families but talked up the importance of the sector for the broader economy.

"Good policy on childcare that encourages women's participation in the workforce is obviously good for participation but it's also good for productivity," he told reporters.

Labor’s treasury spokesman Jim Chalmers also confirmed that more affordable childcare would be a focus for Labor, but would not be drawn on details during a Wednesday night interview with The Project.

Caught up with @BickmoreCarrie and Waleed Aly about #Budget2020, childcare, hiring subsidies and more on @Channel10AU's @theprojecttv #auspol pic.twitter.com/akVjxEhTiL

"One of the key omissions from the budget, one of the things that a lot of Australians are scratching their heads about is why they couldn’t do something about childcare in particular," Dr Chalmers said.

"We don't want a lot of working parents, often mums, to have to make a decision about going to work when almost all of their salary goes into paying for childcare. We'll have more to say about childcare but that's one of the obvious omissions from the budget."

Reply
Upvote
Unfortunately it really is the worst possible time to try and pursued free childcare. We have gone into record debt levels to keep things afloat during the pandemic, and it’s not even close to over.
I also think free childcare is just part of the solution. I know a lot of families - myself included - that wouldn’t put their kids in daycare full time even if it were for free. I took a part time job that was more junior to where I was before kids, and only now - 5 years after my first child - am I back in the managerial role I was in before. We’ve had a much smaller budget to work with at home, but it was a choice we made.
I think a better solution is to have a model where both parents can work part time - Eg 4 days each- so the need for childcare is reduced, the burden is shared across both parents, and there is more chance of progressing - rather than stalling - your
career in the right role. Flexible work is the key.
G
guest2 2 years ago