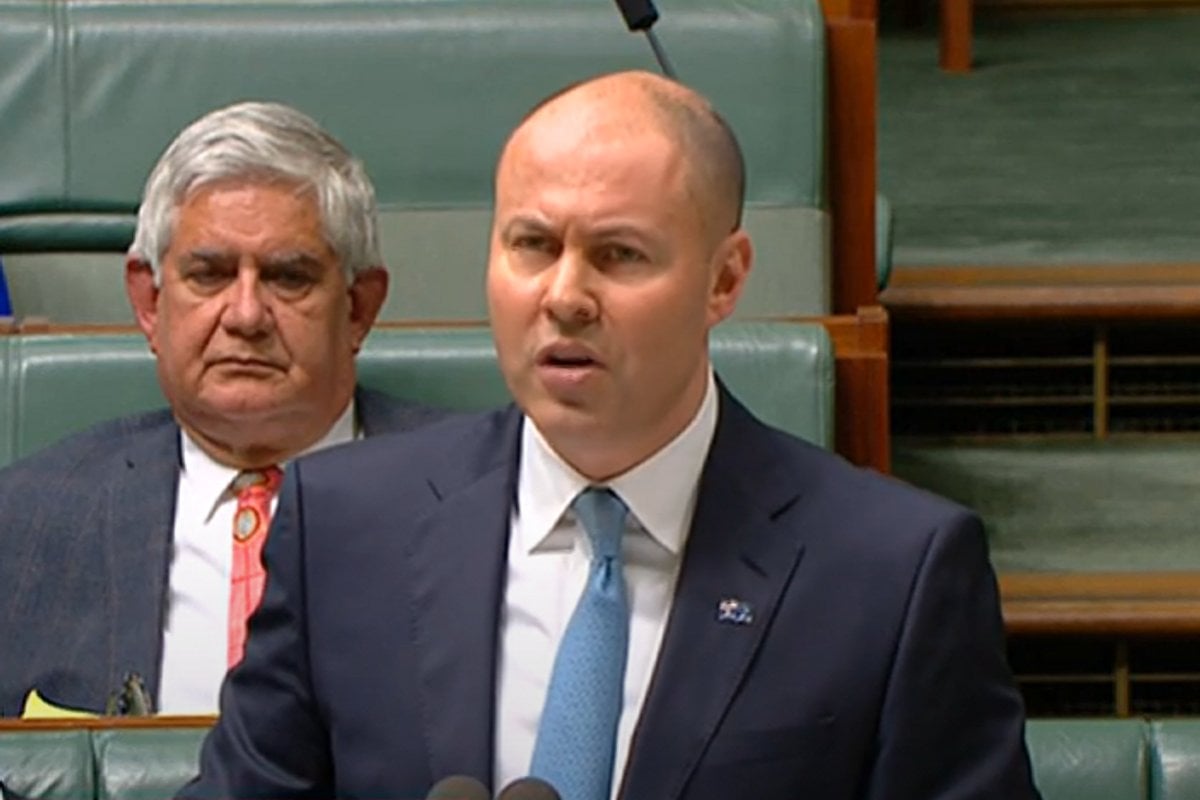 All eyes were on Treasurer Josh Frydenberg tonight as he announced the 2020 Australian Federal Budget.

With Australia in its first recession in 30 years, the budget outlined the Government's plans to steer us through the COVID-19 pandemic and kick-start the economy.

"In 2020, Australians have been tested like never before. Fires, floods and a global pandemic. Lives lost, businesses have closed, jobs have gone," said Frydenberg.

"Two world wars would not bring Australia to it’s knees, and neither will COVID-19."

Overall, the budget focuses on creating more jobs for Australians, particularly women who Frydenberg said made up the majority of people who lost their jobs due to the global pandemic.

"Our economy has been hit, and has been hit hard. In the space of one month, one million Australian’s lost their jobs."

Here's everything you need to know about the 2020 Federal Budget, including who the winners and losers are with the proposed measures.

While last year the Government were excited to announce the first surplus in years during the Federal Budget, funnily enough 2020 hasn’t delivered the same result.

Instead, the Government reported a disappointing $213 billion deficit.

But the hope is that there will be around a five percent ‘bounce back’ for the economy, if the budget outlined this year is approved. How? Frydenberg noted income tax cuts, cash bundles and an investment in around one million jobs to be created with helpful wage subsidies as methods to get the Australian economy back on its feet.

Unfortunately, unemployment is set to peak at eight percent in the December quarter.

However, the Government are planning a deliberate shift from temporary support (AKA Jobseeker supplements) to strong long-term fiscal buffers so that the country can be prepared for the next economic hit. Essentially, the Government want to get more people into jobs as that can place Australia in a much stronger economic position.

Unfortunately, it seems there is no plan to extend JobSeeker or JobKeeper payments.

For JobSeeker recipients, the additional coronavirus supplement of $250 a fortnight will cease at the end of December, while JobKeeper payments will end in March next year.

There was nothing new in the budget for childcare sector, outside of providers impacted by the stage four restrictions in Victoria. The childcare sector was excluded from the JobKeeper program in July, and instead they were substituted to a "transitional support" payment which will continue into 2021.

We know that women have been hit immensely hard by coronavirus job losses, and Frydenberg reiterated that before listing out 'investments' the Government are making into women, and particularly women in work.

However, some post-budget calculations have revealed that only 0.038 per cent of the 2020 Federal Budget was actually focused on women.

To understand the true reason why women have 'lost out' in the Federal Budget, read our explainer here.

The treasurer announced a $4 billion JobMaker Hiring Credit scheme to help get young Aussies into work.

All businesses will be able to access this subsidy, bar the major banks. In addition, $1.2 billion will be injected into apprenticeships, along with a further 50 per cent wage subsidy for new apprentices and trainees.

The Government is expecting this will create around 450,000 jobs for young Aussies.

Tax cuts are set to be delivered to around 11.5 million workers within weeks as a cash injection of $17.8 billion.

Workers will see the lower tax rates come into play on their pay packets as early as mid-October if the Senate approves the plan.

These income tax cuts will be brought forward and backdated to July 1st, if approved.

$1.8 billion will be committed to help the environment. Within this, the biggest single investment in the commonwealth parks to upgrade facilities in Uluru, Kakadu National Park and beyond.

The Morrison Government is also planning on banning the international export of plastic, glass and rubbish and is instead injecting $250 million to modernise recycling infrastructure across the country.

Beyond loans, the Government is set to inject $1 billion towards building affordable housing to help get new buyers on the market.

In addition, $150 million will be invested into the Indigenous Home Owner Scheme, which both builds properties exclusively for indigenous residents as well as offering home loan support.

Hospitals, schools, aged care, childcare and disability services will be given "record funding".

The National Disability Insurance Scheme (NDIS) will receive $3.9 billion to provide support to 400,000 Aussies with a disability.

Those looking for mental health help.

The Government recognised the pandemic has taken a major toll on Australian's mental health. In support, Medicare-funded psychological services will now be doubled from 10 to 20 sessions. The Government also hinted that more announcements will come after Productivity Commission's mental health inquiry report is released in coming weeks.

Senior Australians who want to keep living at home will also benefit from the budget, with the Government announcing 23,000 additional home care packages.

Reply
Upvote
@cat Got to say I don't get why they removed JobKeeper benefits from childcare, but they did provide $708m in short term funding to somewhat replace it.
G
guest2 2 years ago

Reply
Upvote
1 upvotes
@cat The Federal Govt wants to kick start the economy ASAP, not in 12 - 15 years time when those children finish high school.
B
bittersweet 2 years ago

Reply
Upvote
All governments are guilty of looking primarily at short term results and don't seem to care so much about what the future will look like after they have left office.
I would really love to see what budgets would look like if political parties prepared them without being worried about the polls or the next election and purely focussed on the best outcome for the country in the long run...
E
elishatraill 2 years ago