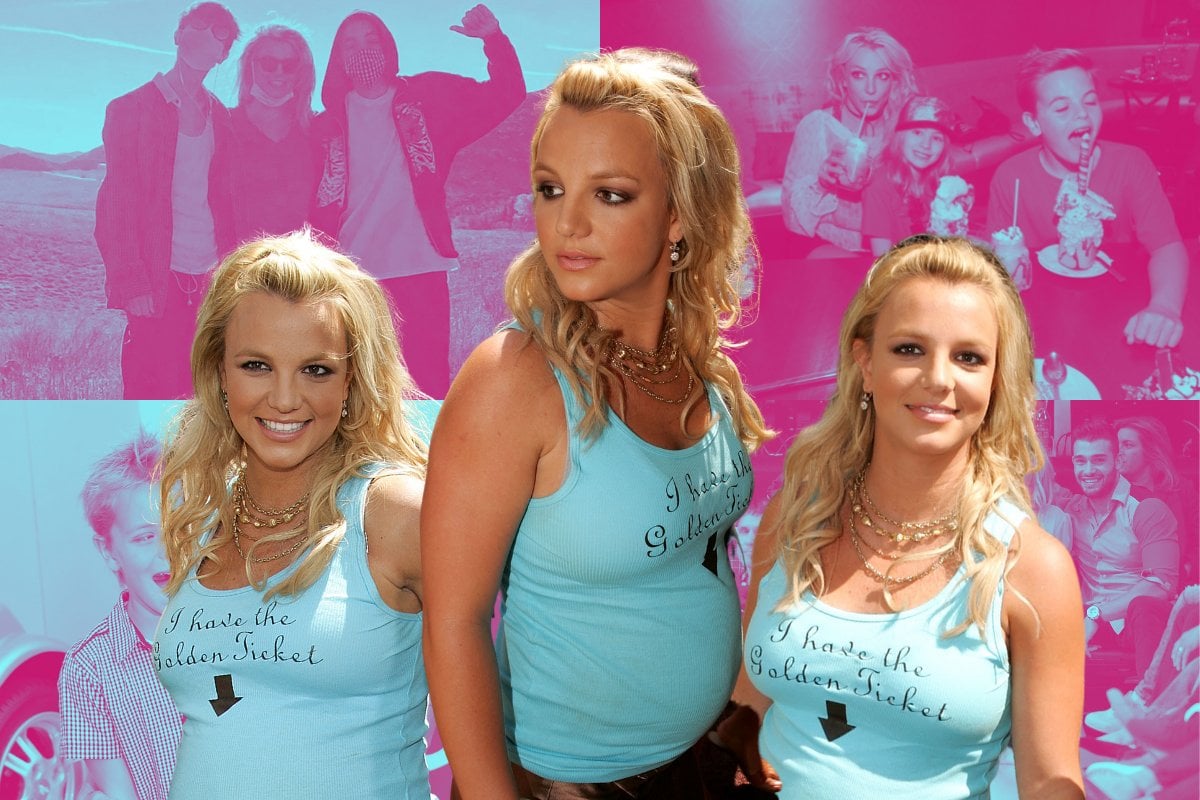 Britney Spears was pregnant with her second child when she was asked about tabloids accusing her of being "a bad mum", during a 2006 interview with Matt Lauer.

"That's America for you," Britney replied, trying to laugh it off.

But the scrutiny of Spears - as a popstar, as a woman and most recently, at the time, as a mother - was no joking matter.

A lot has changed since that interview, but just as much has not.

Spears has spent the last 13 years living under a conservatorship arrangement, unable to make financial or lifestyle choices for herself.

Documentary The New York Times Presents Framing Britney Spears, available to view in Australia on 9Now, delves into the life and career of Britney Spears, including how she's been failed by other people and the belief that she is being held "captive" by her family and management.

It also aims to reveal the latest developments in Britney's legal battles and explore the increasingly loud #FreeBritney movement, which Spears finally added her own voice to during a June 2021 court appearance.

During her 30-minute speech, Spears claimed she has been placed on contraception against her will, and desperately wants to have another child.

Here's everything we know about that, plus the singer's relationships with her kids, Jayden and Sean, who she shares with ex-husband Kevin Federline.

In July 2021, Spears gave a virtual address before a Los Angeles court, speaking out against her father Jamie Spears and her management team.

She begged to be let out of the conservatorship arrangement she'd been living under since 2008, and among many claims, said she was being denied the chance to have another child.

Furthermore, she said she was forced onto contraception she did not want to take.

"I have an [IUD] inside of myself so I don't get pregnant," Spears alleged.

She told the court that she wanted to remove the birth control device "so I could start trying to have another baby, but this so-called team won't let me go to the doctor to take it out because they don't want me to have children, any more children."

Spears has been in a relationship with Sam Asghari since 2016.

Read more: Despite everything, Britney Spears and Sam Asghari have maintained a 'normal' relationship.

On September 18, Spears, then 22 and Federline, then 26, wed in a surprise ceremony in California, but they were not legally married until October 6 due to a delay in finalising their prenup.

Not long after, Spears fell pregnant and gave birth to son Sean Preston on September 14, 2005 - just four days before their first wedding anniversary.

In 2006, the couple welcomed their second child Jayden James.

Just eight weeks later, Spears filed for divorce, citing irreconcilable differences. Their divorce was finalised in July 2007, when they reached a settlement and agreed to joint custody of their sons.

More than a decade on, we know just how tough the last years of the noughties were for Britney Spears.

'If Britney can make it through 2007, I can survive this day,' is one of pop culture's most enduring memes, after all.

Read more: Britney Spears tried to talk to us for years. We didn't listen.

After giving birth to her son Sean, Spears' paparazzi presence exploded and tabloids bent over backwards to portray her as an unfit mother.

She told Matt Lauer in a 2006 interview she feared for Sean's safety as paparazzi banged on their car doors and did everything to get the shot.

Following the birth of her second son Jayden, and divorce from Kevin Federline, images of Britney partying became commonplace on magazine covers.

Weeks after filing for divorce, Britney was photographed on an alcohol-fuelled binge with Lindsay Lohan and Paris Hilton. It was splashed across headlines as a "bimbo summit", with no empathy for the seeds of a mental breakdown that in hindsight seemed obvious.

Soon after came more photos, including the infamous photo of Spears smashing a paparazzo's car with an umbrella.

As we learned in Framing Britney Spears, the former incident happened when Spears was upset at being followed by the man after Federline denied her seeing her sons.

The paparazzi whose car it was explained in the new documentary that the images took place after she'd driven to Kevin's house hoping to see her sons, but he had not opened the gate for her to do so. 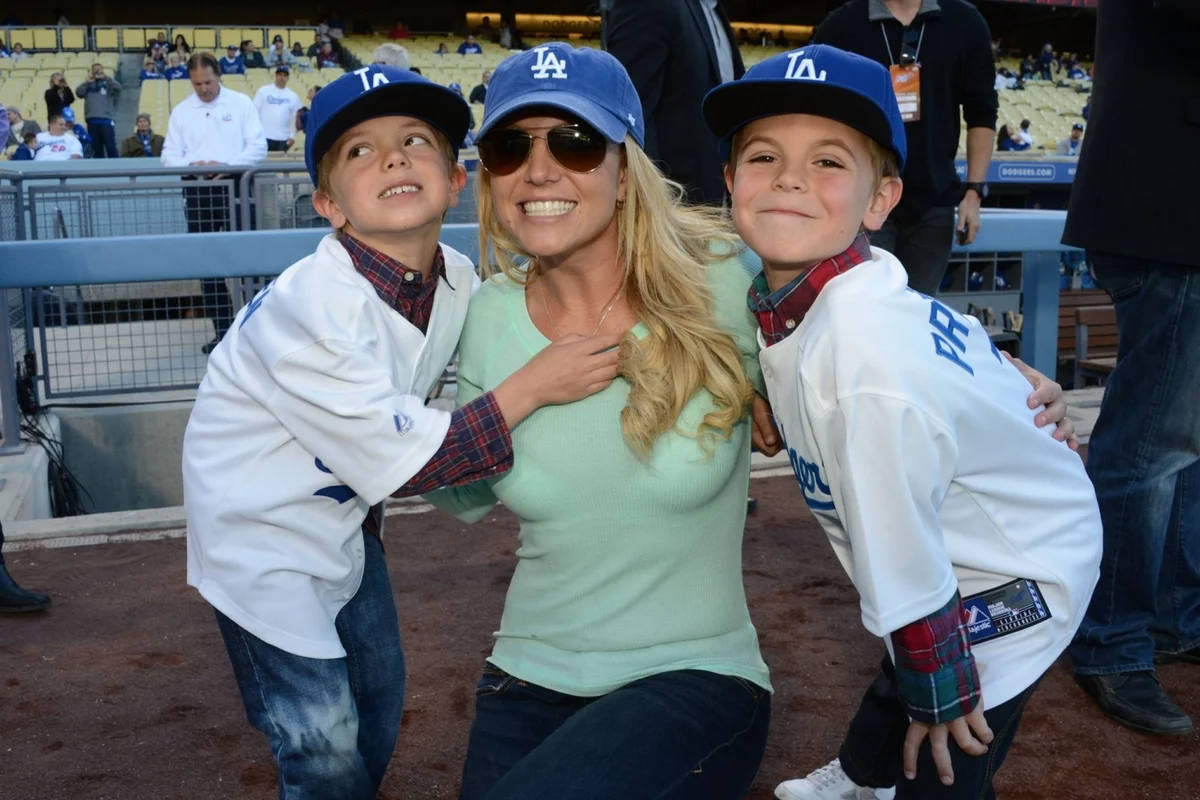 After Spears was photographed driving her sons with a suspended licence, a judge granted Federline full custody.

In January 2008, Spears refused to relinquish custody of her sons to Federline's representatives after one of her scheduled visits with them. This led to her being hospitalised after police that had arrived at her house noted she appeared to be under the influence of an unidentified substance.

Her visitation rights were suspended at an emergency court hearing, and Federline was given sole physical and legal custody of the children. She was put on involuntary psychiatric hold and placed under temporary, and later permanent, conservatorship of her father Jamie Spears.

The former couple have rarely spoken about their custody agreement for their children, but in 2017, Federline told Bravo it required compromise.

"It wasn’t always easy, but it's a lot easier now," he said. "When you are co-parenting, you have to be willing to give up some of the things you would really like to do."

Great time at Disneyland today .... but I don’t remember ever getting that wet on splash mountain ????!!! Geeez .... anyhow my boys are older now, so they don’t like their picture taken ever... so I was thrilled today when they said SURE !!!!! Such a great place !!!!!

In March 2018, Federline returned to court to ask that Spears' child support payments double to US$40,000 a month. At the time, he claimed to be making US$3000 a month.

In September of that year, Spears was ordered to pay Federline US$110,000 to cover his legal fees and agreed to pay thousands more a month in child support, although the exact amount was never released.

When Spears checked into a mental health facility in March 2019 after her father Jamie Spears suffered a near-fatal colon rupture, Federline praised her for seeking help.

Spears currently has 30 per cent custody of her sons, while Federline has 70 per cent. According to People, an adult who is not her father must be present when Sean and Jayden are with their mother.

Spears rarely shares images of her sons on her Instagram page, but in March 2021 she shared a photo and wrote about watching her sons grow up.

"My boys are so big now," Spears wrote.

"It's very hard for any mama, especially a mama with boys, seeing them grow up so fast... I'm extremely lucky because my two babies are such gentlemen and so kind that I must have done something right."

Spears said she didn't share many photos of Sean and Jayden because "they're at the age where they want to express their own identities and I totally get it... But I went out of my way to make this cool edit and guess what... They're finally letting me post it!!!"

Jayden Federline had no kind words for his grandfather during a candid Instagram Live in March 2020.

When one follower asked Jayden if his mother was "being controlled" in her conservatorship, he said "No, I don't know," but also responded to someone who wrote "Help your mum break free" by claiming "That's what I'm trying to do."

Every year i come back to this tree. It’s beautiful! ⭐️⭐️⭐️⭐️⭐️⭐️⭐️

He said it was unlikely his mother would return to music anytime soon, after she announced an indefinite hiatus in early 2019.

"Actually I haven't seen her doing a lot of music at all. I don't think that… I don’t know, dude. I don't even know," he said.

"I remember one time I asked her, I said, 'What happened to your music?' and she was like, 'I don't know, honey. I think I might just quit it'."

Jayden had positive words for his dad ("My dad's literally Jesus") and Asghari, Spears' partner.

He claimed he would share more about his mum's life if he reached 5000 followers.

According to Page Six, Federline "handled" the aftermath of Jayden's Instagram comments, which were made from his father's home.

"It's the result of a 13-year-old acting like a 13-year-old," attorney Mark Vincent Kaplan told the publication. "Kevin is handling it like a responsible parent."

He did not say whether Spears and Federline had communicated about the incident.

Jamie Spears and his grandchildren.

In September 2019, Jayden Federline accused Jamie of abusing Sean, then 13, by putting his hands on him during an altercation in August.

A restraining order against Jamie was taken out in August meaning he is not allowed to see his grandsons for three years.

Sources told TMZ Jamie allegedly broke down a door to get to the teenager during a fight and grabbed him.

Jayden's attorney Mark Vincent Kaplan told People: "There was a disagreement that occurred while Britney and the children were visiting with Jamie at his home that led to a physical altercation that was observed by [their other son] Jayden. Britney did the right thing and removed the children and took them out of there, but the trauma to the kids is nonetheless."

This article was originally published in March 2020, and was since been updated with new information.

I am so disappointed in your headline labelling Jamie Spears as the 'controlling dad' of Britney. That is slanderous and also click bait. None of us know the true ins and outs of their relationship. What we do know is that by Jamie taking over the conservatorship, she was able to restart her career and live a safer adult life. Britney has mental health issues and also has made millions as the talented performer she is. If he had not stepped in, the free loading carrions and enablers could have destroyed her and all she had worked so hard to build. He may or may not be a nice person. We do not know. He has stepped in and done his best to protect his daughter from a very ugly celebrity world and all its hangers on.

Yes, Sam Lufti would have sold her out completely if it weren't for the fact that her father stepped in. But yeah, let's all side with the 13 year old and go for the clickbait headline instead, huh? Let's all vilify Amanda Bynes' family next.

Ooh, yikes. It's nice that he seems to be trying to stick up for his mum, but this is such a bad way to do it. Time for the folks to take the phone away for a bit and have a chat about responsible social media use, I'd say. I'm sure that at his age he has no idea how out of hand this could get.