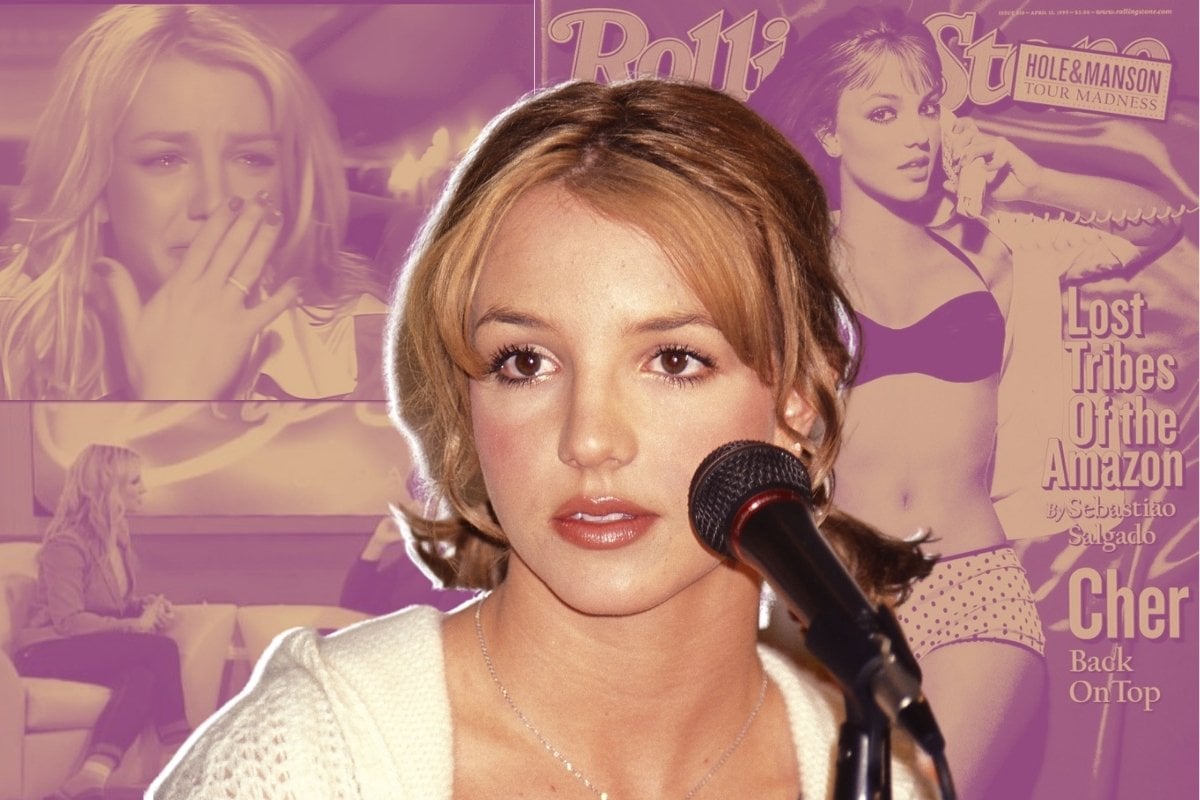 There's something about 'cancel culture' that people seem reluctant to admit: it's kind of comforting.

Yes, it's often wielded far too hastily, too clumsily, and with disproportionate force. But there's also something reassuring in the fact that genuine injustices and transgressions are more readily exposed, that hoards of social media users band together to hold problematic people and ideas to account. Like a neighbourhood watch, but with career-ending hashtags.

Britney Spears certainly could have used that kind of protection. Her fame came 15-20 years too soon.

Video via The New York Times

As the biggest pop star on the planet around the turn of the millennium, Britney's entire life, her body, her relationships, even her virginity were reported on — and consumed — without reservation. The same happens to the stars of today, of course, but what was missing then was the balance, the websites and social media accounts criticising the press' treatment of her and offering alternative narratives.

There was the odd article or forum along those lines, but there were no hashtags or virality to carry them far beyond their usual audience.

Britney's loyal fanbase, led by the #FreeBritney movement, has done what it can to rectify that in recent years, resurfacing old interviews and articles and footage to highlight what she endured. But too much time has passed for their threats of cancellation to carry much weight.

And so, the media got away with it. With all the below, and more...

In 1999, just months after the release of her debut single '...Baby One More Time', Britney Spears achieved a dream of many an up-and-coming recording artist; a cover story in Rolling Stone magazine.

The images were shot by legendary photographer David LaChapelle. On the cover, a teenage Britney reclined on a bed, wearing short, silk pyjama shorts, a black bra and an open shirt. She clutched a phone in one hand and a plush Teletubby toy in the other. Within the pages, she was photographed in high heels, short shorts, an open cardigan and bra, surrounded by dolls and soft toys.

The theme was clear. Britney, aged 17 at the time, was Lolita — precociously seductive. 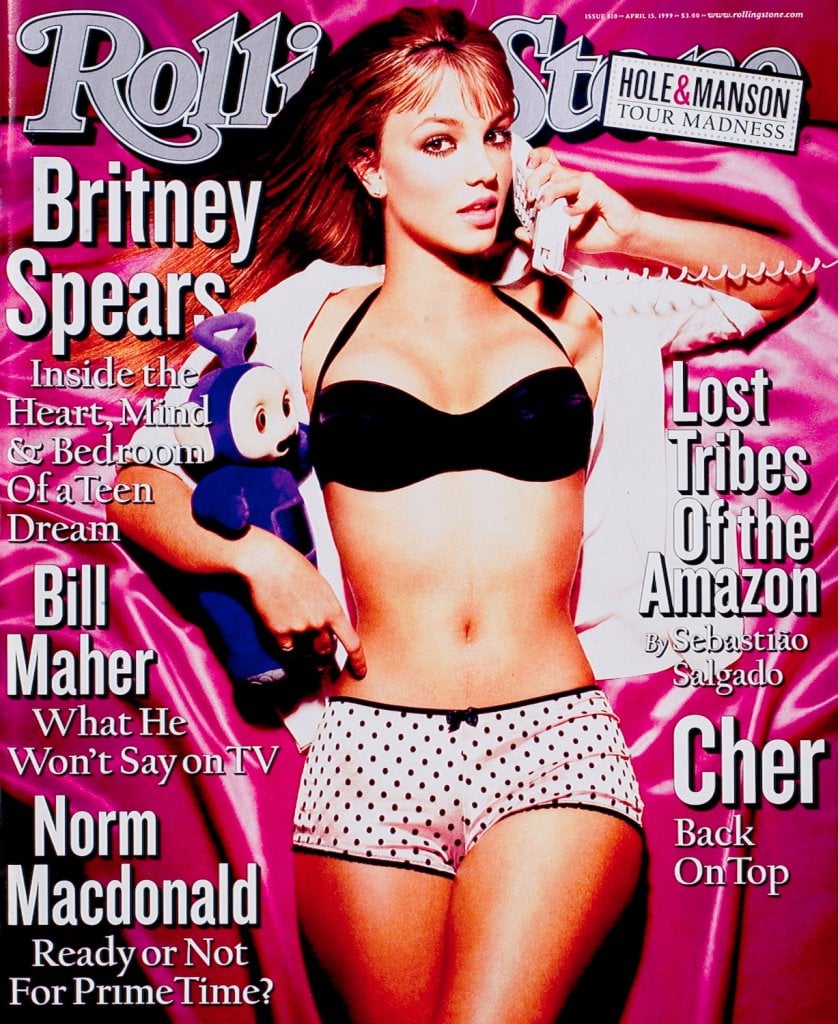 She later conceded in a 2003 interview with British GQ that LaChapelle had "tricked" her into that theme.

"[The images] were really cool, but I didn't really know what the hell I was doing. And, to be totally honest with you, at the time I was 16 [sic], so I really didn't," she said.

"I was back in my bedroom, and I had my little sweater on and he was like, 'Undo your sweater a little bit more.' The whole thing was about me being into dolls, and in my naïve mind I was like, 'Here are my dolls!' and now I look back and I'm like, 'Oh my gosh, what the hell?' But he did a very good job of portraying me in that way."

The constant questions about her virginity.

One of the most disturbing elements of the media's coverage of Britney in the early 2000s was the obsession with her status as a virgin.

It was raised in most of her media interviews, as well as those of her then-boyfriend Justin Timberlake.

In 2002, even Oprah Winfrey, while assuring Britney it was nobody's business whether she'd had sex, also probed her whether the couple had shared a bed.

Even Reuters, a finance and business publication, managed to pose it during a press conference after first luring her in with false sympathy.

Reporter: "I'm just wondering how you feel about all the constant speculation about your virginity and whether you're a virgin or not."
Britney: "I really wish I had never said anything to begin with, because I'm kind of stuck in this little place where people are always asking me. That's just something that's part of growing up and that's just something that we all have to deal with, so..."
Reporter: "Have there been any changes on that front?' [laughter from other reporters]
Britney: "That's a personal question."

The media latched on to the dichotomy of her faith-based morals and sexy pop-star image, and refused to let go.

As Tavi Gevinson so eloquently worded it in The Cut, the implication was "Here is a girl who can perform sex for an audience’s benefit, but who, thank God, has not yet been tainted by experience. America’s response to Spears was puritanical, but so was the fantasy her image fulfilled."

"What happened to your clothes?" The Diane Sawyer interview.

In 2003, veteran journalist Diane Sawyer sat down with then 21-year-old Britney Spears as part of the publicity tour for her film Crossroads.

The interview, which was resurfaced this year as part of the documentary Framing Britney Spears, is striking by today's standards. Diane Sawyer asked her whether she'd recommend staying chaste until marriage to her then 12-year-old sister, whether she'd really only slept with Timberlake, and described her stomach as the "most valuable square inch of real estate in the entertainment universe".

An entire segment of the interview was dedicated to her changing image.

Holding up various magazine photoshoots in which Britney had skin exposed, Diane probed, "What happened to your clothes?... What is this about?... Is it about shocking people?"

"It's about doing a beautiful picture. I feel comfortable in my skin," the singer asserted. "I think it's an okay thing to express yourself."

Later, much was made of her onstage kiss with Madonna at the VMAs. Before probing her about the exact mechanics of the kiss ("You said there was no tongue action?"), the journalist argued that Britney had "upset a lot of mothers" by modelling herself on the pop icon. She quoted Kendel Ehrlich, the wife of a Maryland governor, who said, "If I had an opportunity to shoot Britney Spears, I think I would."

Diane Sawyer not only relayed that threat to a shocked Britney, she qualified it: "Because of the example for kids and how hard it is to be a parent and keep all of this away for your kids."

'What does she look like naked?' The Howard Stern interview with Fred Durst.

But far from light-touch gossip, the interview was explicit, misogynistic and deeply invasive.

Stern asked Durst what Britney looked like naked, whether he was put off by her "thick" ankles, whether she had pubic hair, whether her breasts were real, and whether she was better in bed than Carmen Electra. More than once, he joked that he was playing with himself while they spoke about her.

Among Stern's other comments during their discussion:

"I bet you gave it to her from behind."

"I gotta know. Does she like dirty talk? Can you get dirty with her?"

When Durst expressed reluctance to answer some of the more graphic questions from Stern and his colleagues, Stern shot back, "But so what? Who gets hurt? No one. It's the truth."

Stern, who has won multiple industry awards throughout his career, remains one of the highest-paid media personalities on the planet.