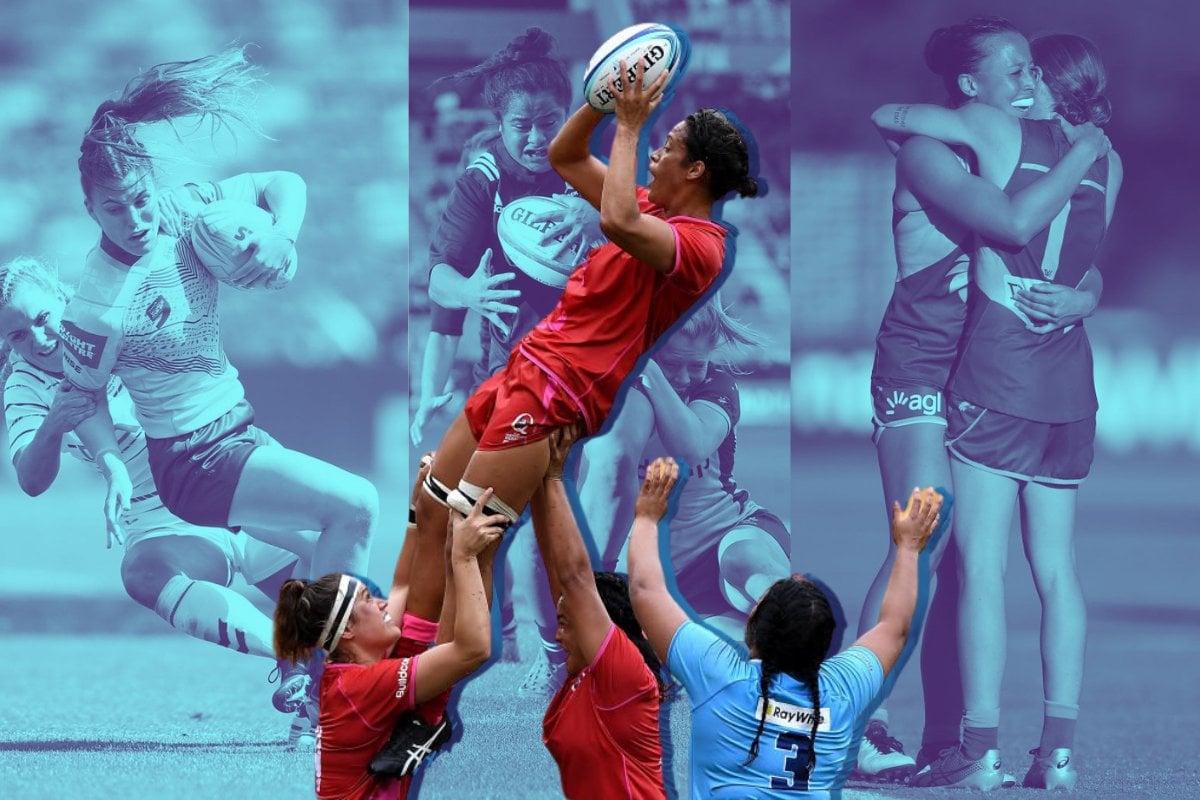 Kirby Sefo knows the risks that come with being a woman in contact sports.

Last year, the 32-year-old took a hit while playing for the Queensland Reds in the Super W which left her with several facial fractures.

She was forced to retire early, under a year out from the 2021 Women's Rugby World Cup where she would have represented Australia in the Wallaroos.

"There's two sides to it," she told Mamamia, reflecting on playing a male-dominated sport.

"You feel really liberated by being able to take part. By holding your own, by performing well and by showcasing decent footy.

"But on the other end of the spectrum, there's still this other fight going on to close that gender gap, because there are still massive inequalities in this sport."

Being "knocked around" in sports like rugby union, rugby league, and the AFL is second nature to professional footy players, both men and women.

But, findings coming out of Breast Research Australia show that almost one in two female players has had a breast injury.

"You get elbows and knocks in every part of your body in footy, but I guess your boobs are a little more sensitive," former AFLW player and researcher at La Trobe University, Brooke Patterson, said.

Despite the high occurrence rate, only one in 10 women have gone on to report a breast injury to their coach or physio.

And with women's sport growing in popularity, understanding the huge discrepancy in injury reporting is more important than ever.

So, why is no one reporting breast injuries?

As Dr Deirdre McGhee, an Associate Professor at the University of Wollongong with a research specialty in breast health, explains there are several reasons for the disparity.

"There has never been an option for players to report breast issues with the normal systems in place," she said.

"The way we currently measure an athlete's injury is, we give someone a 'tick box' which asks questions on the type of injury; e.g. did you have a muscle strain, a stress fracture, ligament sprain, and in which part of the body; arms, shoulder, hip, knee, ankle...

"Breasts do not fit into that categorisation."

Because of this, athletes haven't realised they can be helped.

Listen to The Quicky, Mamamia's daily news podcast as they discuss what men can learn from Women's sports. Post continues below.

Deirdre's research also found that players feel uncomfortable reporting breast injuries to their male coaches and physios, who represent a large majority of the leagues.

"It's a little sensitive to talk about," Deidre explained.

"They are playing sports that are traditionally male and don't want to be different, particularly when many of their coaches are male."

While it wasn't a breast injury that took Kirby down, the research resonated.

"Every woman playing knows in the back of their mind, you just have to handle it because if you don't, you're sort of disposable in this sport." 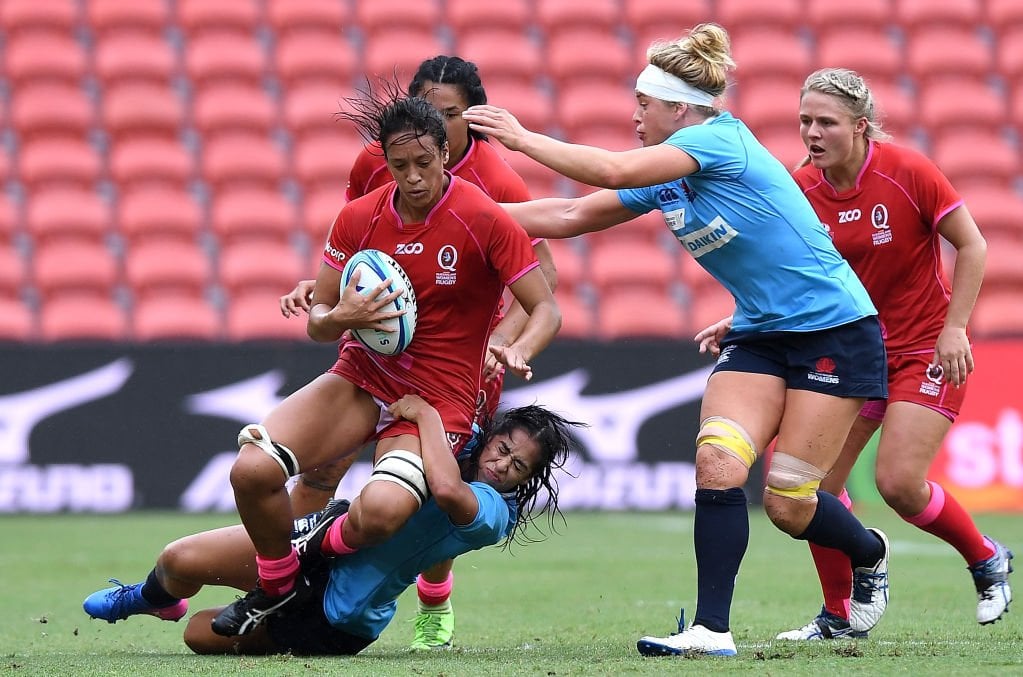 Kirby playing in the Super W, March 10, 2018. "There is an expectation to conform to what is a male-concentrated industry, particularly while we're pushing to be accepted within the sport for reasons such as exposure, funding and opportunities," she added.

How do we reduce breast injuries in contact sports?

Brooke Patterson is a former AFLW player who is currently researching breast injuries at La Trobe University. She believes the first step to reducing the volume and severity of injuries is through education.

"We need to normalise it as an injury," Brooke said.

By making coaches aware of the high volume and impact of breast injuries, they will be able to adjust tackling and marking techniques, provide modified training to players who are menstruating or have suffered a recent injury and implement protective equipment for women.

This includes wearing a correctly fitted bra to reduce the risk of frictional injuries. And while the science is still out on whether breast padding is an effective injury prevention technique, many players have used pads to reduce the impact of hits. 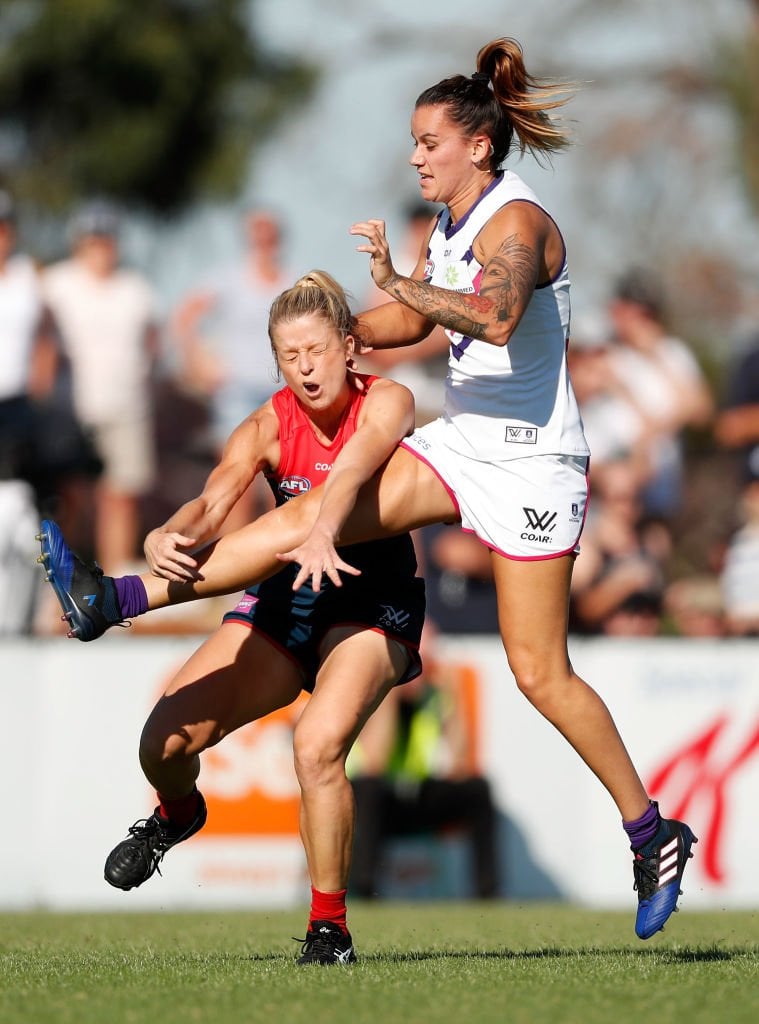 Brooke, playing for the Demons in the 2017 AFLW. Image: Getty.

"A lot of coaches have come from teaching men's teams, and there is a certain level of presumed knowledge that they think the girls' understand on how to tackle and how to approach contact," she said.

"I think it's really taking a step back and breaking down that technique so female athletes can learn how to protect themselves."

Brooke Patterson is now recruiting U16 to U19 and senior women's teams for the 2021 and 2022 seasons, to include in Latrobe's research. If you are a coach, sports trainer, team manager, or administrator contact the research team to indicate your interest at [email protected] or 94791483. You can find out more here.

Reply
Upvote
I also remember hearing someone say on the wireless that women moving into contact sports are statistically more susceptible to injury than men and they don't yet quite understand why.
S
snorks a year ago