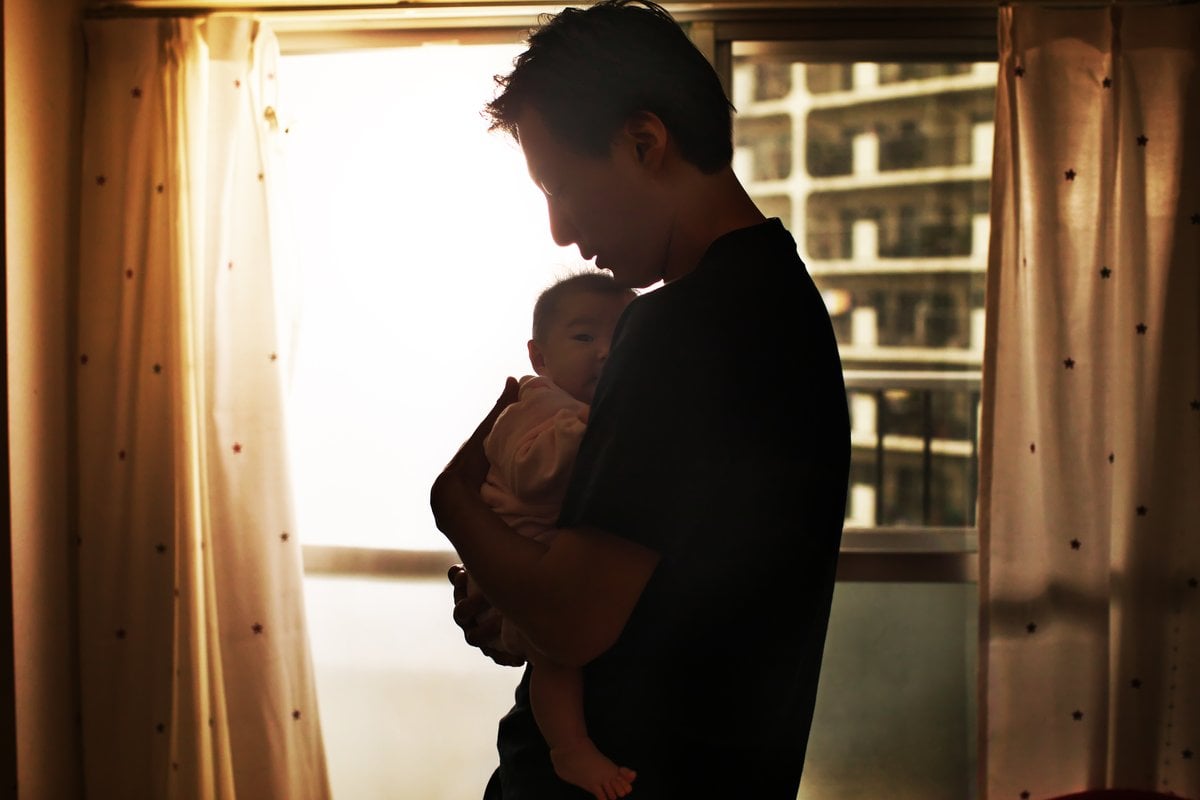 That moment you hear that rapid whucka-whucka-whucka sound of a baby's heartbeat is in its own realm.

Standing there, aware of not wanting to get in the way, while still being right there, I remember looking at the mini TV waiting for some sort of shape or sound to emerge. When that sound finally does come, it’s something that stays with you.

Watching the sonographer calmly move their instrument across my wife’s stomach, doing that dance that only a sonographer knows. A combination of Mr Miyagi’s 'wax on, wax off', 'driving the car', and 'the lawnmower'. The sonographer’s choreographed moves are both captivating and nerve-racking.

But, back to that sound.

Suddenly, that rapid heartbeat of a tiny human emerges through the speakers. You breathe a sigh of relief and realise you can’t stop smiling.

It’s safe to say, I was pumped to become a dad. Like a movie on fast forward, I was imagining playing, family movie nights, hugs and cuddles, trying to get spoonfuls of food into a kid’s mouth, family basketball games, silly wrestling, and chasing them around the house.

Five years on, all of those things, plus many more, have happened.

However, it took a while. And while I was ready and pumped to be a dad, for those first six or so months, it felt like I was on the bench during a game, waiting for the coach to bring me in.

During those early days, I really wanted to help. However, at times, it felt like I wasn’t as needed. Dads want to jump in, but sometimes it can be tricky to know how, or when. Instead of just standing around, I decided to do little things I thought might make a big impact over time.

Every kid is different. So, too, is their sleep. But, I’m fairly certain babies all over the world got together and agreed to keep us on our toes. So, when you find the early morning wake-ups occurring, jump up, grab the pram, and do the early morning stroll.

Get to know your cafe owners really well, especially those that open at 5am.

Plus, when you channel that hunter-gatherer in you and come home with a strong coffee for your significant other, cue a big smile and know you’ve bloody nailed it.

Tip 2: Jump in and do an evening feed just before bed.

Alright guys, there’s a new word you’re going to discover, say, and discuss more than you ever imagined.

Welcome to the world of feeding a baby.

Regardless of your family choosing to breastfeed or formula, something that worked really well for us was me being able to jump in and do the 9/10pm feed. Prepare the bottle, get a couple of baby cloths draped over the shoulder (for the full effect), grab that bottle of expressed milk, or prepare the formula, and head on in to feed your little human.

This is a great move as it not only gives your partner that extra bit of sleep they’ll need, but also gives you some set time to cuddle and hang out with your new addition to the family. That evening feed will become your thing. Every team has specialist roles - make this your one.

Listen to This Glorious Mess, one of Mamamia's parenting podcasts. Post continues after audio.

New parents are battling a lot of things. Sleeplessness, preconceived ideas of parenthood, messages of what they 'should' be doing from family or friends, and caring for a little human that can’t do too much for itself.

Sometimes, when you’re in the thick of it, the simple things get forgotten. Like a shower, eating, or leaving the house.

With a little bit of planning (get your tone right), telling your partner, "I’ve got this, go have a long shower/bath/stroll" can make a big difference. Try to keep it away from watching Netflix - they’ll thank you after they’ve been outside, or taken a long breath in the shower.

(For bonus effects: invite a close friend of theirs for the stroll, or follow up the stroll with a relaxing bath. Throw in a few lit candles and you’ll have bloody nailed life.)

My wife still says the impact on that one little statement was huge. It not only gave her space for herself, but when she walked out the door for a stroll around the block and a coffee, it reminded her there’s a whole world out there beyond parenting.

These three tips will add up and make a difference. A little bit, often, compounds and can add up to a bigger impact than you imagine.

Now, go get in that game.

Dan Steele is an assistant principal, teaching coach and dad of two with a Masters in educational leadership. If you're interested in more posts by Daniel, head to his blog Upgrade Think Learn or at Instagram @upgradethinklearn.

Reply
Upvote
1 upvotes
Can this basically be summed up with 'spend some time with your kid'?
M
mamamia-user-482898552 3 months ago

Reply
Upvote
@snorks Yes. And perhaps with the addition of "...and don't virtue signal while you do it".

Reply
Upvote
@snorks to me the main point was "use some initiative". Don't wait for your partner to ask you to do something, pay attention and be involved, know what needs to be done.
M
mamamia-user-482898552 3 months ago

Reply
Upvote
@rush I'd also suggest that all of that entails a bit more than taking over one feed a day, letting your partner have a shower and taking the kids out for a walk every day to get coffee. Those "little things" are indeed lovely, but men also have to start doing more of the heavy lifting in the domestic arena (without expecting praise and fanfare for doing so, too).
S
snorks 3 months ago