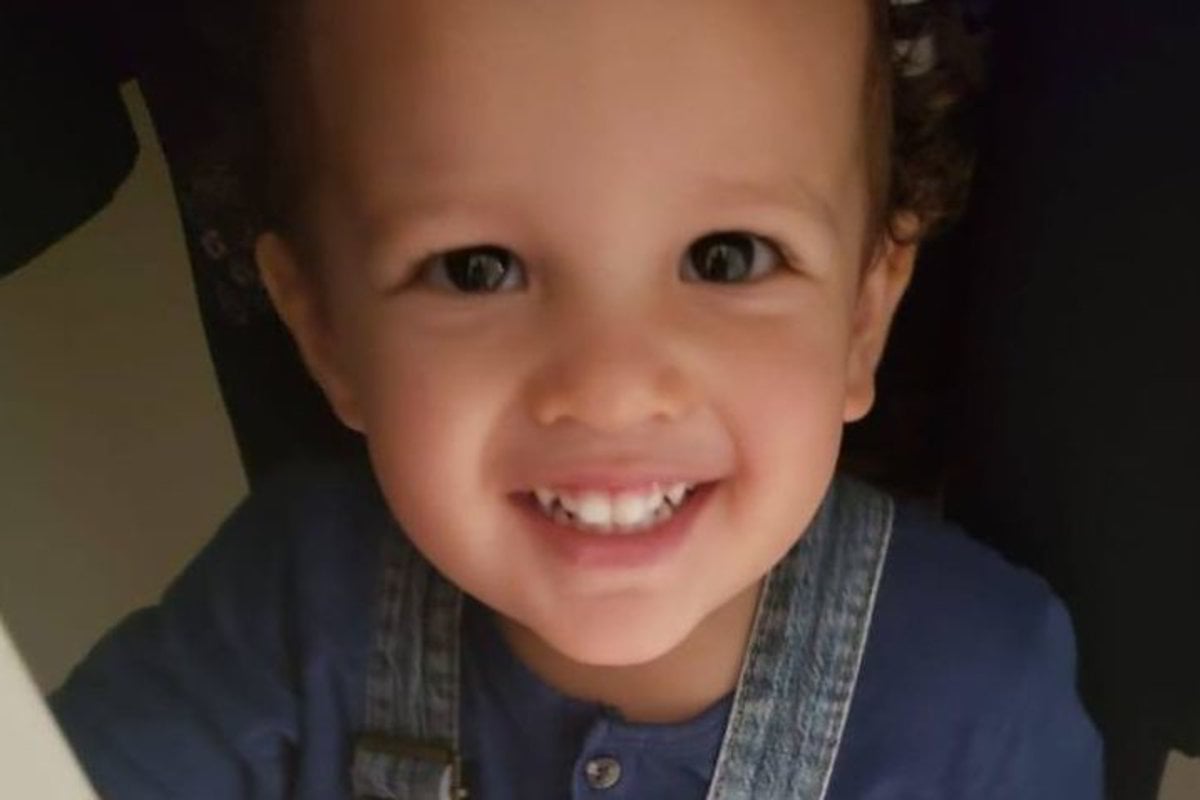 Last Tuesday evening, a pair of explosions sent a tide of obliteration through the city of Beirut, the capital of Lebanon. At last count, at least 158 people have died, with another 5,000 wounded.

Officials and residents are now left to rummage through the ruins to find missing persons in the wake of one of the largest non-nuclear blasts the world has seen.

Beirut, a city of two million, is facing a two-week state of emergency, as declared by the Lebanon cabinet. It comes as the country has been on the brink of economic collapse - with their currency losing about 80 per cent of its value since October - compounded by their recent spike in COVID-19 infections.

Here's what we know about the Beirut explosion.

How the explosion unfolded.

The catastrophic explosion happened at around 6pm local time on August 4. The deafening blast essentially flattened surrounding neighbourhoods, with about 300,000 being immediately displaced by the destruction of the explosion.

Lebanon's President Michel Aoun said it was fuelled by 2,750 tonnes of ammonium nitrate, which had been stored for six years at the port without safety measures.

My God. Lebanon economy collapsing and now this massive explosion. Beirut port (and a lot more, from the looks of it) utterly destroyed. Can’t imagine the human toll we are going to see. pic.twitter.com/vljWYftJWE

The blast created a mushroom cloud over the city centre, with videos of the event demonstrating the sheer scale of the eruption, which could be felt more than 240 kilometres away in Cyprus.

Footage from inside people's homes shows the terror the blast elicited. One woman, who was vacuuming on a balcony, has been praised online for her immediate instinct to protect a young girl and act as a human shield as they hurried inside.

Another woman was in the middle of posing for her wedding photos when the blast erupted.

Following the disaster, the Lebanese Red Cross said hospitals in the city are either so full, or so badly damaged, that hundreds of patients have been turned away or treated outside of buildings. It has called for urgent blood donations.

Investigations are still underway to determine whether the explosions were accidents or intentionally triggered.

Two-year-old Isaac Oehlers has been identified as the Australian victim killed in the Beirut explosion.

The family expressed their heartbreak in a statement released by the Department of Foreign Affairs.

"We are heartbroken by the sudden and tragic loss of our beautiful boy following the disaster in Beirut," the statement read.

"The family would like to thank everyone who has offered comfort and support to us, and would like to express our condolences to everyone in Lebanon who is suffering from this devastating tragedy.

"We request that the media respects our privacy at this difficult time."

One Aussie was killed in the Beirut explosion, he has been identified and his image released - 2 year old Isaac Oehlers. Rest In Peace little one. Incredibly sad. Pic: 7 News #BeirutExplosion pic.twitter.com/9Y61bD9HgE

The people of Beirut have come together in inspiring ways in the explosion's wake.

One video shows rescue workers carrying a man from the debris, covered in mud and taken into an ambulance. The public around him cheered on, celebrating the success of the rescue mission. It's understood he had been stuck under a building that have caved in for over 10 hours, according to ﻿The New York Times﻿.

One woman played the piano in a symbol of hope whilst surrounded by broken glass and the ruins of her broken home.

Sad day for Beirut & Lebanon with the big explosion at Beirut Port. All thoughts are with the lost and loved ones. Hope never leaves my city after all. #Beirut #PrayForLebanon #prayforbeirut #PrayersForBeirut #Lebanon #LebanonExplosion #لبنان #بيروت #بيروت_في_قلوبنا pic.twitter.com/NJMQeVQcm8

Other people rushed to offer support for people who have been displaced. "Please DM me if you or anyone you know needs shelter," Joelle Eid said on Twitter. "My family home was not affected and is open. We can arrange for transport as well." According to World Vision, local assessments, say as many as 500,000 people will need assistance with immediate needs such as food, clothing, and shelter.

Please DM me if you or anyone you know needs shelter. My family home was not affected and is open. We can arrange for transport as well. #ourhomesareopen #Lebanonexplosion

The city is also now in desperate need of blood, given the thousands of people wounded. Overnight, hundreds of people lined up to give blood to Red Cross in Tripoli for victims of Beirut.

The Beirut explosion in pictures. 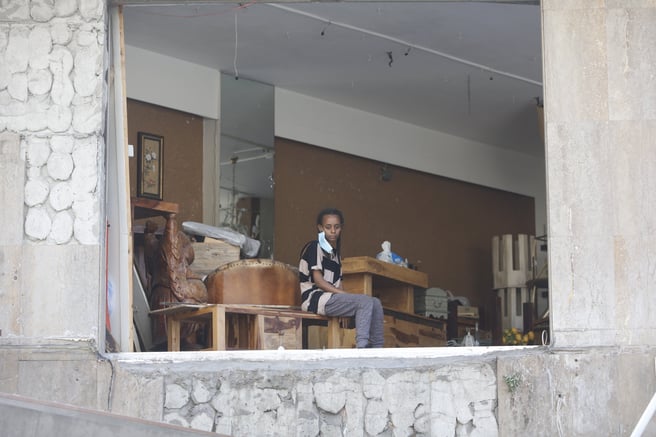 A woman looks out of the collapsed facade of an apartment, damaged by an explosion a day earlier. Image: Getty. 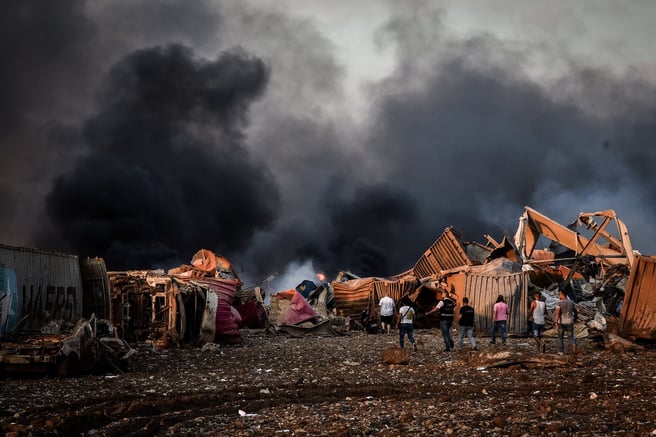 A photo of the blast in Beirut on August 4. Image: Getty. 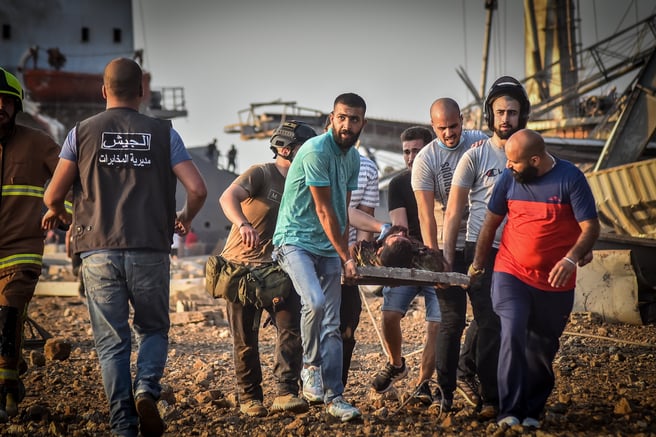 Civilians carry a victim at the port after the explosion on August 4, 2020 in Beirut. Image: Getty. 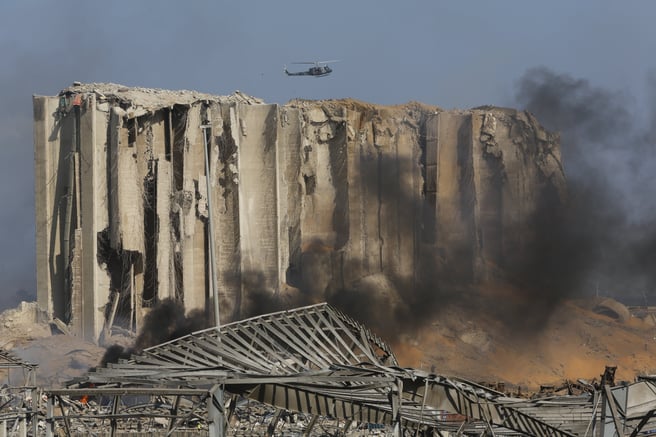 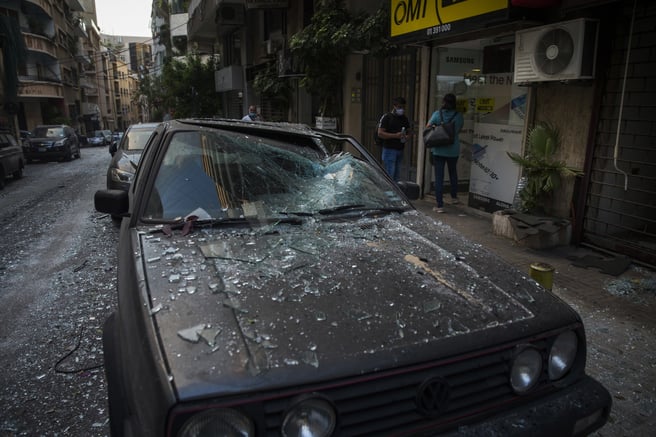 A car is damaged after a large explosion on August 4, 2020 in Beirut, Lebanon. Image: Getty. 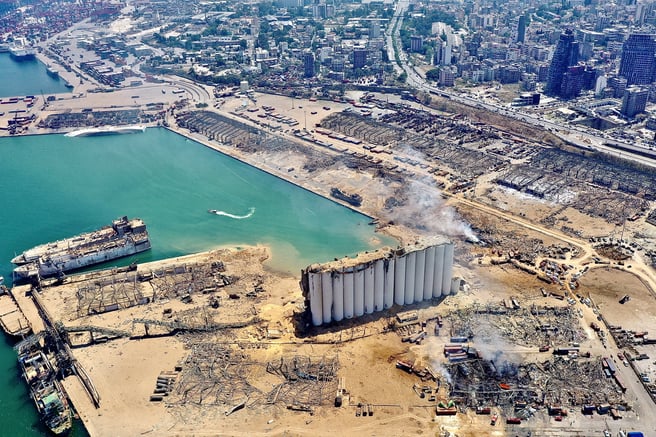 A drone photo shows the damage after a fire at a warehouse with explosives at the Port of Beirut led to massive blasts in Beirut, Lebanon. Image: Getty.

Reply
Upvote
Almost looks like a nuclear blast. Not a good idea storing ammonium nitrate near a city.
R
rush 2 years ago

Reply
Upvote
@michael the before and after pictures are dreadful, the size of the crater is just horrifying.
R
rush 2 years ago

After seeing the video of the explosion, I'm shocked the numbers aren't the other way around! I suppose that the port area is probably not as densely populated as a residential area, and unfortunately the death toll will rise. I hope every other country is looking at their port set-ups right now, and making safety their first priority.
R
random dude 2 years ago

Reply
Upvote
@rush Off topic here, but I had to ask. How did you highlight the quote? It's a feature I've missed.
R
rush 2 years ago

Reply
Upvote
1 upvotes
@random dude I copied it, then clicked the little " marks on the reply box, then pasted. I think. First time I've done it, mostly by accident! 😆
R
random dude 2 years ago

I copied it, then clicked the little " marks on the reply box