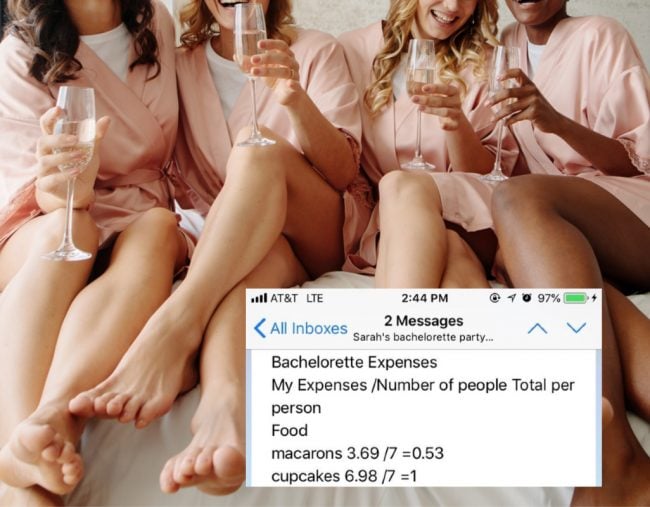 When you leave a hen’s party you expect to take away severe dehydration, a headache and stories you can never, ever share. One thing you don’t expect to have is an itemised invoice saying you owe $0.43 cents for M&Ms.

But uh… That’s exactly what seven women got after attending ‘Sarah’s bachelorette party’.

One of the women shared the message she received on Reddit following the event and it’s just… mind-blowing.

The bride had divided the cost of everything between her seven attendees… including the $3.69 spent on macarons, $2.99 spent on a watermelon and $82.16 spent on pizza. They also spent $2.50 on lemonade and $1.68 on Sprite, which seems unnecessary because aren’t they the same thing???

The original poster said the party was BYO, but still invoiced her guests $3.23 each to pay for champagne and vodka she bought herself.

It's... weird, right? And very thorough: "The list goes on too. God forbid we get away without paying each $0.28 for paper napkins," the poster wrote.

"I would offer to stick this invoice where the sun don’t shine and nothing else... or you could pay the invoice in pennies you are hurling at her from a moving car," one person responded.

It's not uncommon to help pay for the cost of a bachelor or bachelorette party, but this itemised invoice takes things to a whole other level.

For the original poster, things will balance out at the wedding: "I’m going to eat the f*** out of her wedding food to make up for it," she wrote.