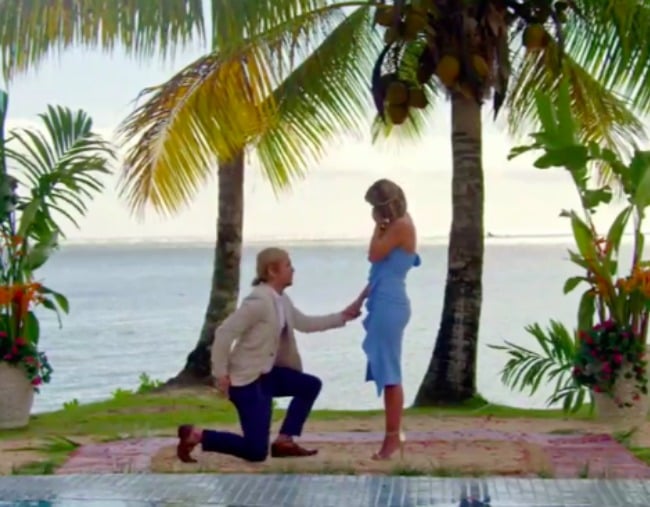 We all had our assumptions about who would be proposing to whom in the Bachelor in Paradise finale.

But we’re pretty confident in saying absolutely no one thought it would be Sam Cochrane getting down on one knee and asking Tara Pavlovic to marry him. (Nice one, producers.)

So when voiceover artist “Uncle Sam” did propose to Tara, we got a little emotional. And we weren’t the only ones.

The people of the Twitterverse had very real feelings about this proposal, and here are just a few of the best:

There were those whose minds were a little bit blown when they realised what was happening.

OH MY GOD SAM IS GOING TO PROPOSE TO TARA #BachelorInParadiseAU pic.twitter.com/4htpWlQpWh

There were those who were uncontrollably crying happy tears.

When I realise Sam and Tara have made me believe in love, a little teeny bit #BachelorInParadiseAU pic.twitter.com/PxVDYSGAS3

Tsunami Warning: Australia about to be flooded with tears as Sam proposes to Australia’s Queen Tara #BachelorInParadiseAU

Me and the rest of Australia right now because of Sam and Tara ???????? #BachelorInParadiseAU pic.twitter.com/51EjRqlwen

There were those who had some pretty good ideas, actually.

Tara: I’ll never try to change you
Australia: CUT. HIS. HAIR. WHILE. HE. SLEEPS #bachelorinparadiseau

And a lovely message from our old mate Osher.

“YOu make me want to shut up and listen, and not just wait for my turn to talk”

That’s the reason I love this guy. #BachelorInParadiseAU

What were you thinking when you saw Sam proposing to Tara? Tell us in the comments below.