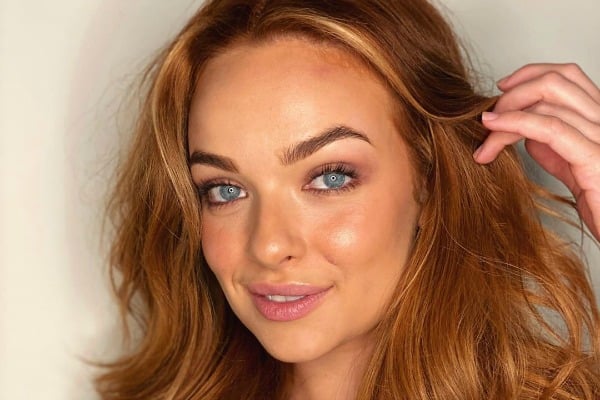 Although it's a little hard to believe, it's been an entire year since Matt Agnew, Chelsie McLeod, and Abbie Chatfield filmed The Bachelor finale in South Africa.

Now, with the premiere of Bachelor in Paradise looming, Abbie Chatfield is about to return to our screens once again among returning contestants including Jamie Doran, Ciarran Stott, Timm Hanly and Brittany Hockley.

Watch the trailer for the upcoming season of Bachelor in Paradise below. Post continues after video.

Here's everything we know about Abbie Chatfield, ahead of the show's premiere.

When The Bachelor aired in 2019, Abbie faced incessant online trolling.

During her time on her show, the 24-year-old was critiqued for wearing a bikini, for the way she kissed Matt, and even for the clothes she wore.

Eventually, the bullying reached the point where Abbie was receiving death threats.

"When you’re getting 200 messages telling you to kill yourself, you feel like your entire world is negative," Abbie told Mamamia’s daily entertainment podcast, The Spill, at the time.

"It makes you scared to go outside, I didn’t want to go out for a drink in a bar until when the show was done airing."

In the last year, the trolling has thankfully quietened down.

But although much of the online bullying has subsided, Abbie previously told Mamamia that she still receives at least one troll message per day.

Abbie isn’t opposed to naming and shaming her trolls on social media either.

"Naming and shaming is 100 per cent fair and, in my opinion, necessary," she told Mamamia.

"I see it as the only tool I currently have at my disposal to prevent further bullying. Trolls do not listen to reason, so to out them is to at least show people what I receive on a regular basis, and takes the benefit of anonymity away from the troll,” she continued.

"I have no interest in protecting people who feel the need to message anyone deplorable things.

"These messages 100 per cent lead to mental health issues, which can, in turn, lead to suicidal thoughts and suicide itself. It is not something I take lightly.”

A successful podcast and career.

While Abbie has been vocal in the past about how she was treated following her time on the show, the Brisbane woman has also embraced her social media community, building up a legion of followers on Instagram and Facebook.

On Instagram, Abbie hosts Tea Tuesdays Q&A sessions, where she invites her 148,000+ followers to share their deepest and darkest thoughts and respond to questions such as, 'What's the dumbest thing a man has ever said to you?' and 'What is something that no one knows about you?'

The popular series has also taken off on YouTube, receiving thousands of views.

In March, she also launched her own podcast, It's A Lot with Abbie Chatfield, which has covered countless topics, including endometriosis, feminism, reality TV, and fat shaming.

Following her tough experience with online trolling after The Bachelor, Abbie had to think twice about appearing on Bachelor in Paradise.

"I spoke to producers and the team at Warner Brothers about it, and they have been very supportive of me," Abbie told Mamamia's The Spill podcast in April.

"This might be the wrong way to think about it but I just thought to myself, ‘what could be worse than what I already went through?’

"I’ve grown since that time, I have a following now of people who like me and I have my podcast. I now have a platform to talk about these things, even if things from the show were to go awry.

"I also wanted to have a more positive experience than the one I had on The Bachelor."

Upon entering paradise, Abbie told The Spill that she was excited to meet Timm and Ciarran, who were contestants on Angie Kent's season of The Bachelorette.

Listen to The Spill's interview with Abbie Chatfield below. Post continues after podcast.

"I actually only went there to meet Ciarran because he was the guy who really interested me from Angie’s season. But you’ll have to see if that changes or not," she shared.

"I also got to meet Brit Hockley who was so lovely and girls from other seasons who I had never spoken to before. There are girls on the show who haven’t been publicly confirmed yet but who are really amazing, and I was surprised to like so much."

Bachelor In Paradise will air on Channel 10, with the premiere date yet to be released.