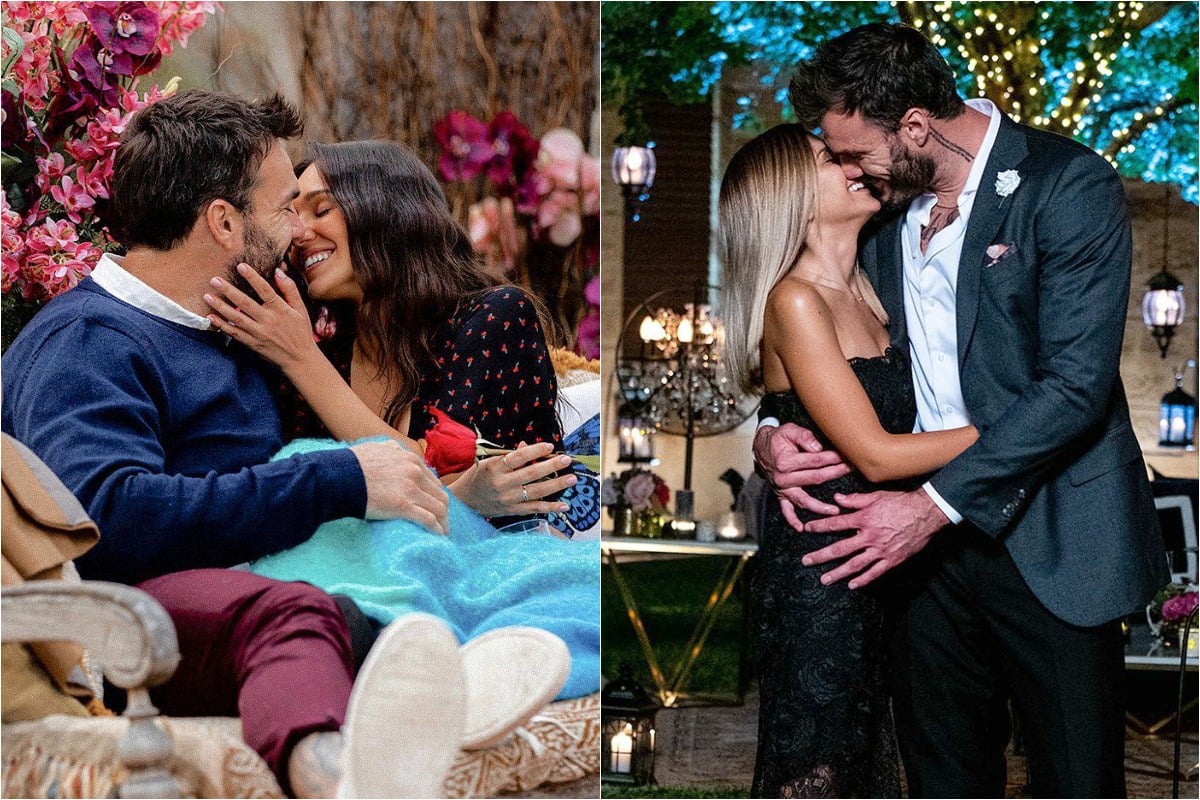 Behind the scenes of The Bachelor, in a moment we didn't see, Locky Gilbert told Izzy Sharman-Firth he was falling in love with her.

His actions left Izzy completely shellshocked when, in last night's episode, she was sent home at the rose ceremony.

Watch: The Bachelor decorates a cake while answering rapid-fire questions. Post continues below.

There's a reason the Bachelor is supposed to stand solemnly, true feelings concealed, when a contestant professes their love for him.

Sure, it makes for awkward silences, and at times feels almost cruel - but it also protects the vulnerable women putting the full extent of their emotions on show.

Because no one wants to be told someone is in love with you only to have that taken away. Especially left with the knowledge it's not only over between you - but they're giving that love to someone else.

We know what you're thinking: What did they think they were signing up for? etc, etc.

But by many accounts, Bella Varelis went on The Bachelor primarily to boost her social media following. Then she fell for Locky, big-time.

Izzy didn't think her connection with Locky was all that strong initially, until they spent time together in lockdown and it deepened, to the point they started discussing what a future together would look like.

And Irena - well, for someone who seems to have had it in the bag from the start, it can't be fun realising her (probably) current boyfriend told another woman he was falling in love with her.

But in a dating environment where seeing multiple people at once is normalised, Locky's actions aren't all that surprising. Dating apps encourage not just playing the field, but mining it for constant connections - deeper, stronger, more immediate, closer.

We've all been Izzy, thinking we'll be the one standing at the end only to be blindsided.

We've all thought we were the only one, then discovered the disheartening truth - they were still swiping; there were others; they gave you empty, short-term words.

A friend recently had an intense month-long relationship end when she realised the guy who she was having weekends away with and who was (his words) "falling for her" changed his profile picture on Hinge. Why, she asked, would he feel the need to do that if he was invested in his relationship with her?

At that point, the trust was broken and she couldn't pursue anything further with him. She was committed; he was keeping his options open.

All throughout this season of The Bachelor, women have come forward to share that they were romantically linked to Locky around the time of filming. According to Perth's Charlie Octavia, who alleges she was seeing Locky one month before the cameras started rolling, he told her he loved her "all the time".

Perhaps that's why this season has been overshadowed by feelings of doubt about his intentions. Is this a man trying to find true love, or one who uses the term a little too loosely?

In promotions for the final episode, Locky is shown agonising over his decision - how, he questions, can he have such strong feelings for two women at once?

"You don't break up with someone you love," he laments.

Which brings us to the sad truth: unless he pulls a Honey Badger, Locky does end up breaking up with someone he told he loves, and who loves him back.

And that's pretty tragic - no matter who you are in the love triangle.