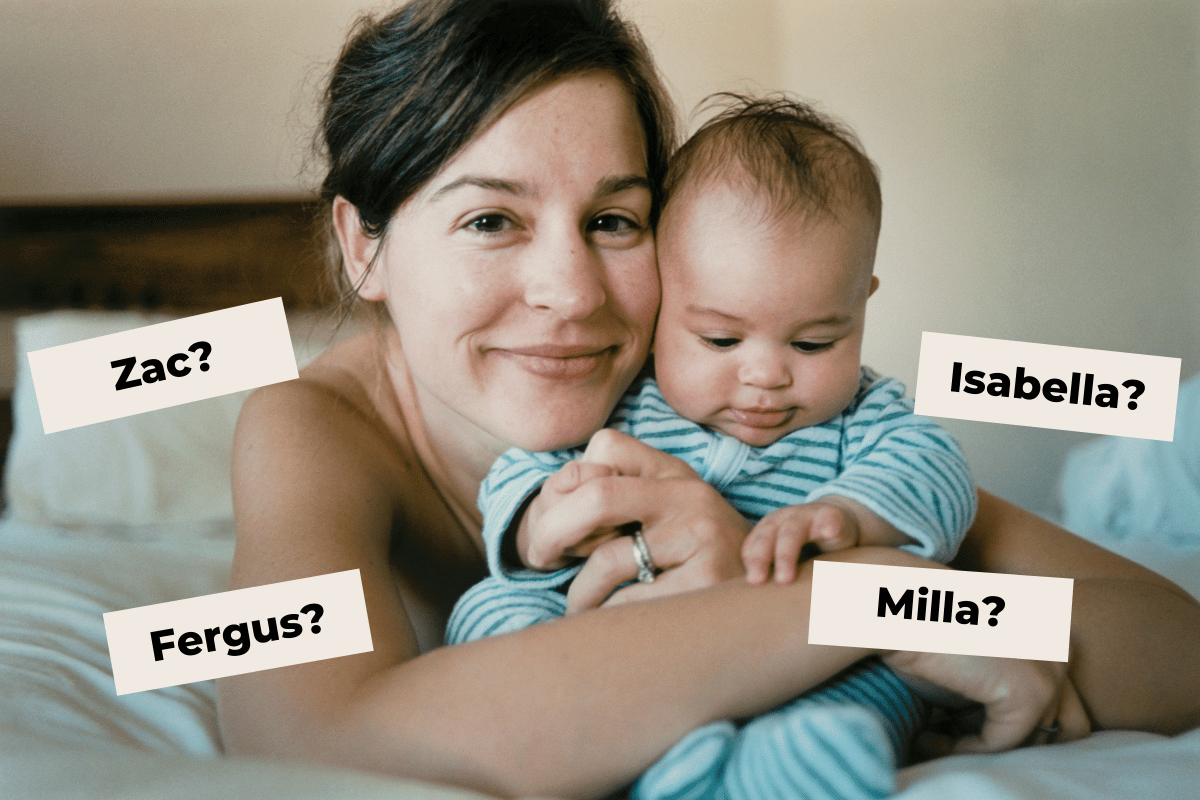 Choosing the right baby name is just one of the hundreds of jobs new parents have to do.

And it's certainly no easy decision.

Not only do you have to find a name that you and your partner both agree on (and hasn't already been snatched up by a rogue cousin), you also need to find one that actually... fits.

Watch: How people have reacted to our baby names. Post continues below.

With that in mind, it's understandable that parents might change their minds after a couple of weeks (or hours) and opt for something entirely different.

The mother-of-three chose the name after asking her Instagram followers to vote on whether they preferred Huska or Husky, which she is now using as a nick-name.

When a fan asked about her son's name in an Instagram Q&A, Krystal responded saying, "It's actually neither of these names on his birth certificate but we call him Husky".

She added that she won't be sharing her son's legal name on social media.

And she's not the only celeb who's swapped out her kids' name.

Just last year, Amy Schumer shared that she tweaked her son's name after realising it sounded like... "genital".

"It was Gene Attell Fischer but we realised that we, by accident, named our son ‘genital'."

Of course, she's not alone.

Here are 16 other women who decided to change their baby's name, and what made them to do.

"I had a moment of clarity in the NICU."

"We had the name Zac Angus in mind. We changed it after he arrived because I had a moment of clarity in the NICU and it sounded like black Angus." - Jem.

"My parents' Australian friends called him fungus instead of Fergus."

"My brother was Fergus until my parents' Australian friends called him fungus. He has been Brendan since three months old. That was his middle name until it was changed. He does like the name Fergus 40 years on, and probably would not have changed it to Brendan!" - So.

"I’m so glad we changed it when we did."

"I had boy/girl twins, I named them Louie and Charlie. My little Charlie was constantly getting mistaken for a boy, even being dressed in pink. They were even confused on different paperwork as male twins. Just before they turned one I changed her name legally to Charlotte. I had literally never even thought that it would be an issue until after they were born. It was so frustrating, I’m so glad we changed it when we did." - Shay.

"For 24 hours after she was born her name was Isabella."

"My daughter’s name is Georgia, but for 24 hours after she was born her name was Isabella, we even received cards congratulating us on Isabella’s birth... oops. Georgia was always my first choice, however someone from my prenatal group called her daughter Georgia and I felt it kind of took the shine away from the name. However, after the morphine wore off I went with my heart and called my daughter Georgia." - Kylie.

"My hubby had spelt her name wrong when he registered her."

"My daughter is called Phillipa - she had an official name change at one week old as my hubby had spelt her name wrong when he registered her ('Philippa' - a hard no from me!). We only realised when we got a congrats card from a very close friend who had also spelt it wrong - I pointed out the mistake to my hubby, he quickly excused himself from the room to make a phone call and find out how to change the registration before he told me what he’d done." - Melinda.

Listen to this episode of Mamamia Out Loud, where Mia, Holly and Jessie discuss the birth message that divided them. Post continues after podcast.

"I decided I couldn't stand the name."

"We named our first daughter Milla Daisy, within eight weeks we had changed it to Daisy Audrey as I decided I couldn't stand the name Milla! Our second boy went from Sonny to River Alexander Johnson (family middle names) to River Rocket to just Rocket in his first 18 months! I'm pretty sure there is no long-term damage." - Kate.

"After the birth, I was full of so many drugs I barely remember filling out the birth certificate details."

"I was set on my son's middle name being Roy after my grandfather. But after the birth it was so traumatic and I was full of so many drugs I barely remember filling out the birth certificate details. When I got it... it said Logan Roy-Paul after my best mate and also godfather to the kiddo, who we had joked so much with about including his name. I am sure I was a firm no but in that woozy moment I just did it. And it’s suits him and we all love it." - Bianca.

"Our son was named Alexander but quickly became Zanda as that’s how his two-year-old sister pronounced it."

"Our son was named Alexander but quickly became Zanda as that’s how his two-year-old sister pronounced it! We decided to officially change it to Zanda on his birth certificate as that is totally how he identified himself and to save confusion/inconvenience for him in later life." - Alice.

"While feeding him I realised the name didn’t suit him at all and I wanted it to be changed."

"My partner and I were very unsure what to call our son when he was born and had a fair few names picked out. We decided two days after he was born on Hudson and announced his birth and name to everyone. The next day at about 5am while feeding him I realised the name didn’t suit him at all and I wanted it to be changed. We finally agreed on Alby. I am so glad that we changed his name - Alby really suits him." - Lucy.

"My dad called me and told us this name will get the baby relentlessly bullied at school."

"We initially called our third child Cassius. We hadn’t announced it officially yet, but we told both sets of our parents. My dad called me back a few hours later, after it sunk in that we weren’t joking; and told us this name will get the baby relentlessly bullied at school. In my vulnerable, hormonal state, after speaking to him, hubby and I freaked out and decided to call him Emmett instead." - Sarah.

"We were watching a movie and in the credits rolled up an actor named 'Dale something' and that was it."

"My partner and I just couldn’t agree on a name - I wanted slightly uncommon names and he wanted the general boring names. Anyway, we eventually agreed on Jamie. When my son was born calling him Jamie just didn’t feel right, we persevered for a month until the registration deadline then we were watching a movie and in the credits rolled up an actor named 'Dale something' and that was it. Didn’t care what my partner thought at that time... hehe.He was a Dale." - Lina.

"Her mum split up with her dad as a baby and changed her name."

"My mum's name at birth was Jacqueline, after her dad Jack. When my grandma split up with my grandpa, she thought the opposite of Jack is Jill, so she renamed my mum Jillian!" - Charlotte.

"Her two-year-old brother couldn't pronounce her name when she was born."

"Our little girl is Dakota, however her two-year-old brother couldn't pronounce that when she was born so called her 'Baby Coco'. It stuck and now she gets Coco/Koko 95 per cent of the time - friends, family, daycare/school staff all refer to her as Coco." - Adele.

"After 16 months we changed our daughter’s name."

"Ebony didn’t stick. After 16 months we changed our daughter’s name to Pepper and she immediately started calling herself 'Peppi'." - Hedy.

"When I bought her home from hospital the very old gentleman from next door commented 'you look like you have a dolly in your arms'."

"My daughter was named Clara at birth. When I bought her home from hospital the very old gentleman from next door commented 'you look like you have a dolly in your arms'... She is nearly 20 now and we still call her Dolly." - Tamara.

"The nurses encouraged my dad to name me."

"I am one of those people whose parents named me and then changed their minds. I go by my middle name. When I was born my mum and I were both gravely ill. The nurses encouraged my dad to name me, which he did. He named me Alexandra. My mum and I both recovered and then my mum decided that people would shorten the name and she didn’t want that. So my middle name became my known name. It’s a bit of a pain when it comes to sitting in a doctors surgery etc. I attempted switching to Alexandra when I went away to boarding school but I am a Jane." - Jane.

Reply
Upvote
I always thought that "Philippa" was the correct spelling. I can tell you now, as someone with a similar name (more than one way to spell it, with mine being the less common version) she is destined to spend the rest of her life saying "Phillipa, two l's, one p" every time she has to give her name for something! And I'm not sure why that one Grandpa thought Cassius would result in bullying, odds are he'd be called Cass most of the time anyway - maybe he was worried he'd be called Cassandra?
C
cat a year ago