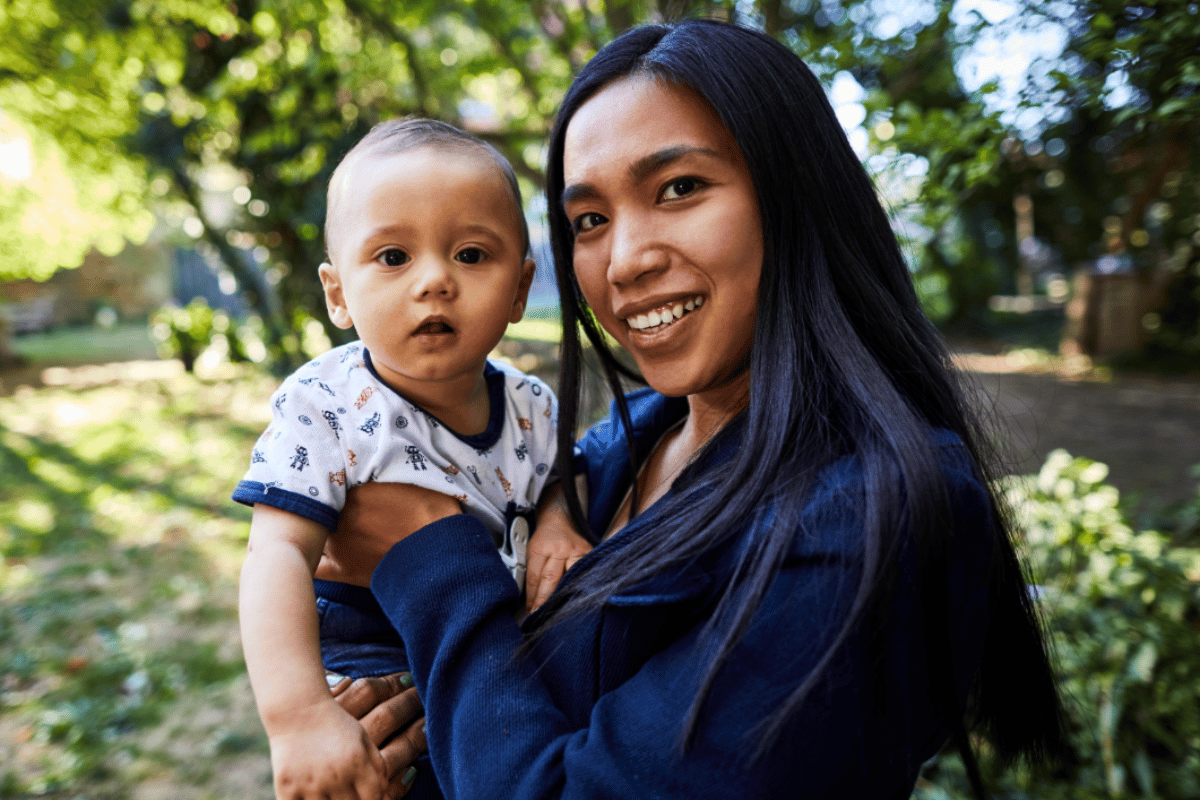 When it comes to picking a baby name, there are a lot of things parents need to consider.

Is it too common? Is it too unique? Does my partner like it?

And even when you find a name that seems to tick all the boxes, it might have been taken by someone you know, it doesn't quite work with your last name or just doesn't seem to... fit. As such, a lot of perfectly good baby names inevitably end up being brushed aside in the 'maybe next time' pile.

But even though you may not have used your preferred baby name, chances are you still love it and think about it every now and again when you meet someone with that name or hear it pop up in someone's else search for the perfect baby name.

So to find out what baby names we all love, we asked the Mamamia community to share the names that made it to the top of their lists, but they never got to use.

"I loved Edward but my last name is Cullen (I’ve never seen Twilight) so my husband said no way. I ended up having a girl so the argument was short-lived!" - Sam Cullen.

"I loved the name Poppy for a little girl (it was my number one), but my children call my dad Pop or Poppy, and I call my Pop, Pop, so it didn’t feel quite right. I still love the name. I also liked the name Rory for a boy, but Rory Storey? No way." - Megan Storey.

"Avery for a girl. It got panned by my husband and a couple of close friends because it was too close to ovary or reminded them of a birdcage." - Kim Chapman.

"I wanted Scottie for a girl after reading the book The Descendants (it was then made into a movie with George Clooney). I fell in love with the name and wanted to call my daughter that but then chickened out at the last minute because so many people said it was too left of field. I vowed that if I had a girl next it’d be Scottie, then we had a boy! So I haven’t used it. I still love it though. I don't regret not using it for my first as I think she really suits the name we ended up picking for her." - Georgi Dyason.

"Loved Freya but my boyfriend at the time hated it, so I named my cat Freya. I had no kids with him anyway. I ended up with Jaime Skye, Gabriel (Gabe) Charles, Daniel John and Tara Emelyn." - Carolyn Yvonne.

"I wanted to name my daughter Aisling (Irish name, pronounced Ashling), but my husband is Swiss and as a non-native English speaker he thought English names were hard enough without having to pronounce an Irish name. Fair enough! So we named her Ashley." - Rachel Franzen.

"I really wanted Logan if we had a boy, but then his name would have rhymed. We had three girls anyway." - Katie Bowman.

"I loved Miller, Luca and Darby for boys but my husband didn’t like them at all." - Danina Stower.

"I loved the name Anais... but didn’t go with it because I didn’t want my daughter to have to spell her name constantly or get called anus by mean A-holes." - Fiona Earl.

"I quite wanted Lucius for a boy but everyone said Lucius Lynch sounded like a supervillain. All the girls names I loved but didn’t use have been handy for naming my chooks - Gloria is our latest." - Talia Lynch.

"One of my closest friends and I were pregnant at the same time. She told me if she was having a boy, their name was Angus. Angus had been my name since I fell in love with Angus on Seachange as a teenage girl... I wasn't planning on finding out what we were having but a few weeks later, my friend discovered she was having a girl. Even though she wasn't using the name, I felt like I couldn't either because it could appear like I'd 'stolen' it. She was totally innocent in sharing her name with me but I was a tiny bit disappointed when I had a boy in a subsequent pregnancy and didn't feel comfortable using that name." - Jemma.

"I loved Brielle and also Jessilyn. I had two boys so they didn’t get used. Loved that they were names that were just a bit different." - Rachel Teeroovengadum.

"I love the name Scout. I’ve had it picked out even before I meet my now husband. Luckily he liked it too and agreed that if we had a girl that’s what her name would be. Scout Hennessy (yep, even got the middle name picked!) Four boys later and I’m still holding onto the name." - Hannah Murrin.

"I wanted Quinn for my girl but my husband used his veto as our son is called Finn." - Bebs Tisdall.

"I really liked Ethan but hubby vetoed it and we had a girl anyway. In fact, we can’t agree on any boys names so lucky we never had to argue over it. He says I like ‘private schoolboy’ names." -  Lisa Wilfert.

"My husband and I really liked Fox (as in, Fox Mulder) and it wasn’t that popular then but I still worried about my son having an unusual name (like mine) so we named him Dorian (yes, also unusual but less so)." - Truan Terrance.

"I’ve always been obsessed with the name Fox, then I married a Cox! So he would be Fox Cox. Also always loved the name Violet but the last girl my husband was with was a Violet and he’s banned it." -Rachel Wrigley.

"I wanted Tristan for our boy but my husband deemed it 'bogan', so he's now Elliot." - Kate Norris.

"I still love it but didn't suit our girl and I actually knew someone who named her daughter Elora a few months before I was due." - Mollie Oneill.

"I have a guilty pleasure for the name Wolfgang. So cute!" - Maz Taylor.

"Sloane for a girl! We both loved it and were convinced I was having a girl... we had a boy." - Stephanie Zuniga-Maher.

"When I was first getting to know my now sister-in-law we bonded over a shared favourite girls name Elsie. I said jokingly that she could have it... we had the first baby and it was a girl and I felt I couldn’t use it. So far, she has had boys." - Emily Lhs.

"I loved Elise but my husband said no, we have two girls, Betty and Maggie. I also wanted to name Maggie, Pearl but I lost that vote too... For Betty, we were tossing between Betty and Audrey. We chose Betty because the only reason we were thinking Audrey was because we were worried people would hate the name Betty. We have had many comments on her name - many bad, many good, but we love it!" - Caitlyn Gill.

"Lucas but doesn’t go with our surname. Same with Luca, Lucy and Skye! Doh. Jamie for either gender but my other half didn’t like it. Alex and Nina, I love but they are already in the family/good friends," - Fiona Lucinsky.

"I always wanted to use Archer Charles or Brooker Charles for boys or McKenzie or Matilda Grace for a girl but all were vetoed. We have Amalia Jane, Saxon Glen and Tyrah June." - Kayla Sarina.

"I loved, and still do, but my husband hated it... I also loved names ending in son - Addison, Emerson, Harrison. But with my last name - No!" - Mel Richardson.

"Absolutely loved the name Layla for a girl. My partner just wasn’t into it. I was so upset for days (I blame hormones) - we ended up going with Sienna." - Caitlin Walsh.

"I love Jody for a boy (it was from my fave childhood story, The Yearling) but it wasn’t the right name for our fellow." - Stacey Lamb.

"I love the name Reyne for a girl but it doesn’t quite work with the surname McLeod." - Kristy McLeod.

"I was mad for the name Truman for a boy. But then our son was born and he just didn't look like a Truman. My husband vetoed all my name ideas and then suggested Henry. And dammit, he 'looked' like a Henry. So we have a Henry Atticus." - Michelle de Cean.

"I liked the name Fleur or Aurora for a girl... but I only had boys. I liked Aaron for a boy but Aaron Barron is absolutely not gonna happen." - Lee Barron.

"Our boy name was Evan which I loved but as we had a girl we opted for Amelia (Mimi) only for a friend to point out a year later that Evan would make a lush girl's name! So annoyed with myself for not clicking at the time! Also, recently my fave name girls is Posie, just so cute." - Alison Jane Tripney.

"My grandma's name was Sandra and we liked the connection. We ended up not using it because I knew she would be called Cassie and that didn’t feel right. I’m sad we didn’t go with the link to grandma but now I think our Lucy has a name that fits her really well!" - Nicole Daniels.

"Kamaria, but my husband didn't like it and we had two boys anyway." - Joscelynne Stopp.

"I had so many girl’s names but had three boys! Rosalie, Elodie, Arabella, Liliana, Anäis (ruled out as pronunciation too hard for most people) and Matilda. Most of those would have been ruled out by the wife as either friend’s names or a cat." - Liz Taylor-Kerr.

"My name has no movement for nicknames and I HATED that as a kid. So I’ve always been pretty thoughtful about names that have multiple options for nicknames - Tilly, Tilda, Matty (pronounced more like Maddy). My husband wasn’t convinced with our first, gave permission to use it with our second but we had a boy." - Kylie Gerstenberg.

What baby names do you love but didn't end up using? Let us know in the comments below.