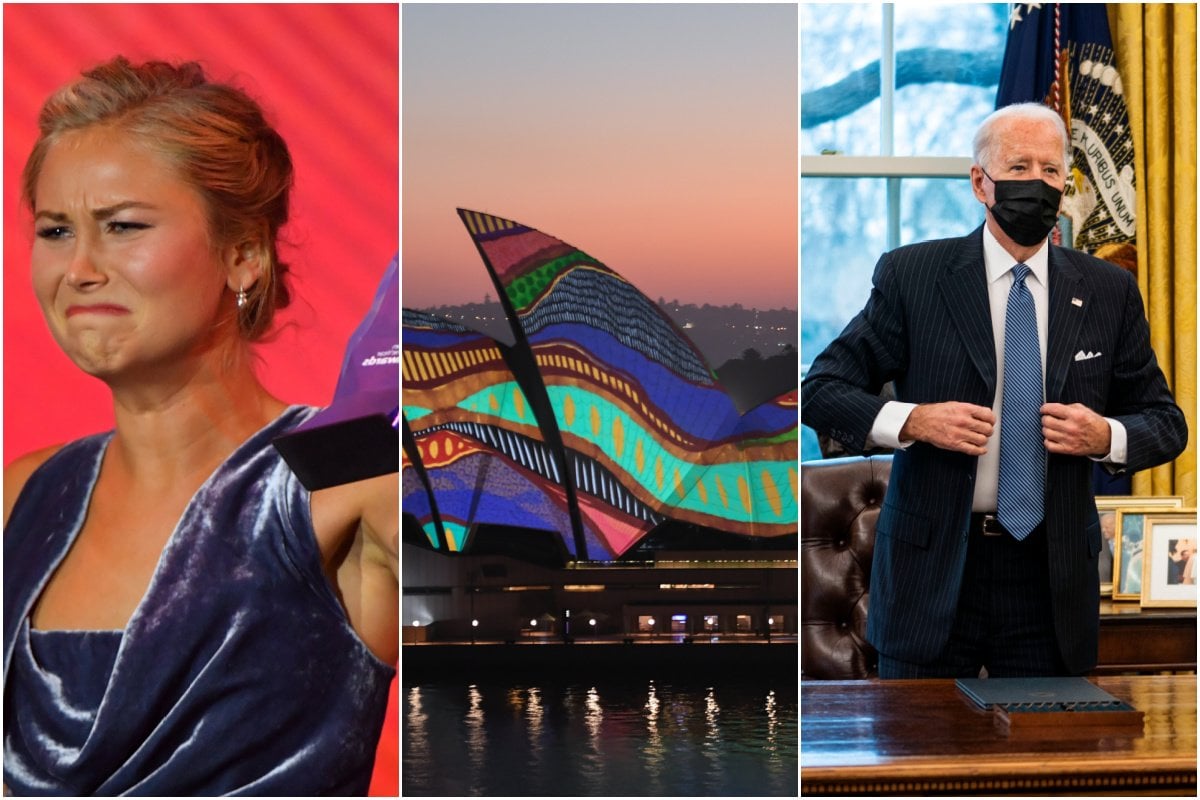 Empowering sexual assault survivors and highlighting the importance of education as prevention is set to be the focus for new Australian of the Year, Grace Tame.

The 26-year-old from Tasmania was awarded the honour on Monday evening, having already been named the Apple Isle's Australian of the Year.

READ: Grace Tame is officially the 2021 Australian of the Year. Here is her story.

Ms Tame was awarded for her tireless advocacy for sexual assault survivors, resulting in the overturning of Tasmanian laws preventing survivors from speaking out.

She was just 15 when she was groomed and abused by her high school maths teacher, who was later jailed for his crimes.

Her experience helped spark the #LetHerSpeak campaign, helping Ms Tame become the first woman in Tasmania to be granted the legal right to speak out about her experience as a sexual assault survivor.

Ms Tame has pledged to spend the next year advocating for better education on assault, grooming and psychological manipulation by abusers

"We've come a long way but there's still more work to do in a lot of areas," she said.

"Child sexual abuse and cultures that enable it still exist.

"Just as the impacts of evil are borne by all of us, so too are solutions born of all of us." 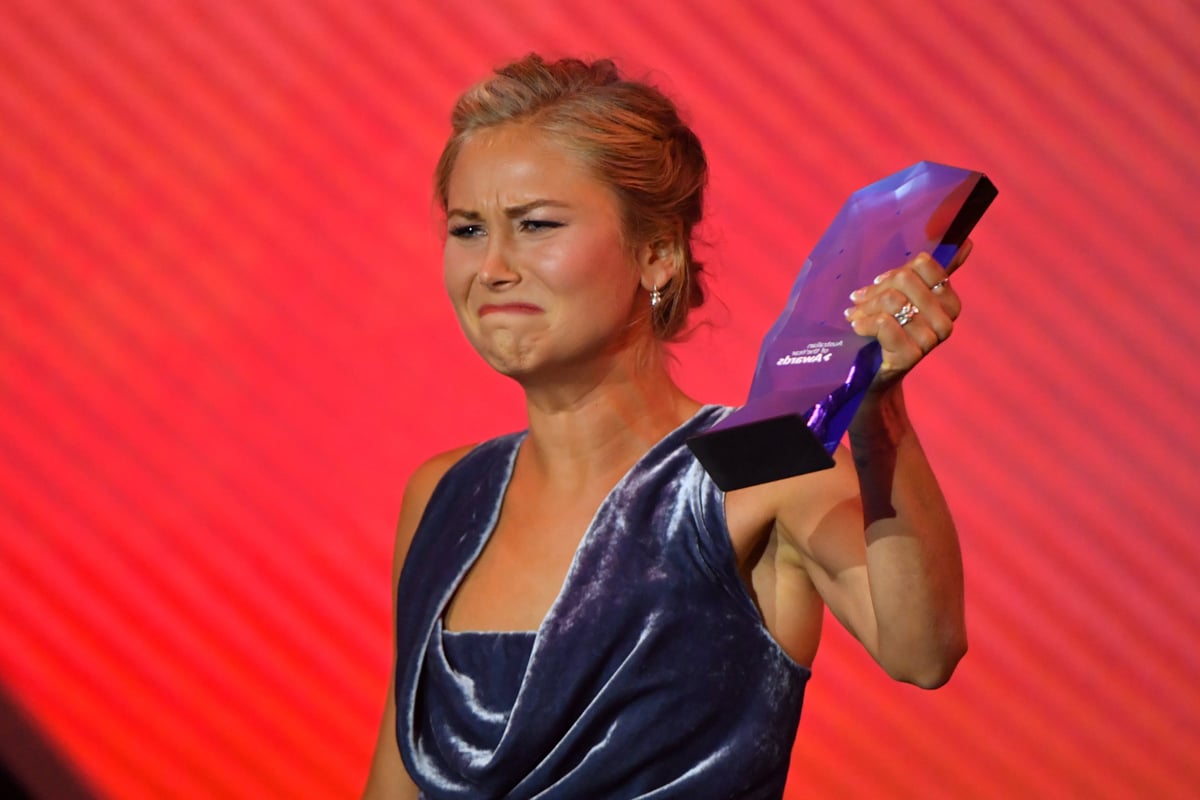 2021 Australian of the Year winner Grace Tame during the awards at the National Arboretum in Canberra, Monday, January 25, 2021. Image: AAP Image/Mick Tsikas

All four Australian of the Year categories for 2021 have been won by remarkable women, with the recipients revealed by Prime Minister Scott Morrison at an event in Canberra.

Aboriginal elder Miriam-Rose Ungunmerr-Baumann has been crowned Senior Australian of the Year, using her speech to implore the nation to better understand Indigenous communities.

Young Australian of the Year Isobel Marshall is a social entrepreneur and student who is passionate about ending 'period poverty' and stigma around menstruation.

Kenyan refugee turned NSW local Rosemary Kariuki was crowned Australia's Local Hero for her work helping female migrants combat loneliness and the unknown as they settle into their new communities.

Four women have taken out this year's awards, with 26-year-old sexual assault survivor and advocate Grace Tame named Australian of the Year. https://t.co/pfBb6MPWUd

Australian TV veteran Kerry O’Brien has refused his appointment as an Officer of the Order of Australia (AO), in protest at controversial tennis great Margaret Court receiving the highest honour.

Court has become a divisive figure for her outspoken views on homosexuality, conversion therapy, same-sex marriage and transgender people.

O'Brien said, "her hurtful and divisive criticisms are clearly repugnant to many Australians. I believe the decision to present her with this award was deeply insensitive and must undermine community respect for awards."

ABC journalist Kerry O'Brien has rejected his Australia Day honour in protest, saying the decision to award tennis great Margaret Court the country's highest honour is "deeply insensitive and divisive". Do you support his decision to forfeit the honour? #9Today pic.twitter.com/fUrlReJGFe

Thousands to march in protests and rallies across the country.

Australians will mark the country's national holiday on Tuesday with celebrations and protests around the country.

Thousands are expected to march in capital cities to advocate abolishing 'Australia Day' and demand justice for First Nations people.

In Melbourne, an Invasion Day rally will go ahead despite the city's annual Australia Day parade being cancelled.

In Sydney, the NSW Police Minister has warned the thousands of people planning to march in protest that they face fines or imprisonment for violating COVID-19 public health orders.

"We've spent the last three weeks trying to come together to get the police to help us... [but] they won't come to the table with us."https://t.co/RVm90dgDxr

The country has again been roiled by the annual debate about whether the date of celebration should be changed or the name changed to Invasion Day.

Prime Minister Scott Morrison opposes changing the day, saying it is "all about acknowledging how far we've come".

A poll published on Monday suggests the majority of Australians do not want to change the date, with Mr Morrison saying he was not surprised by the results. 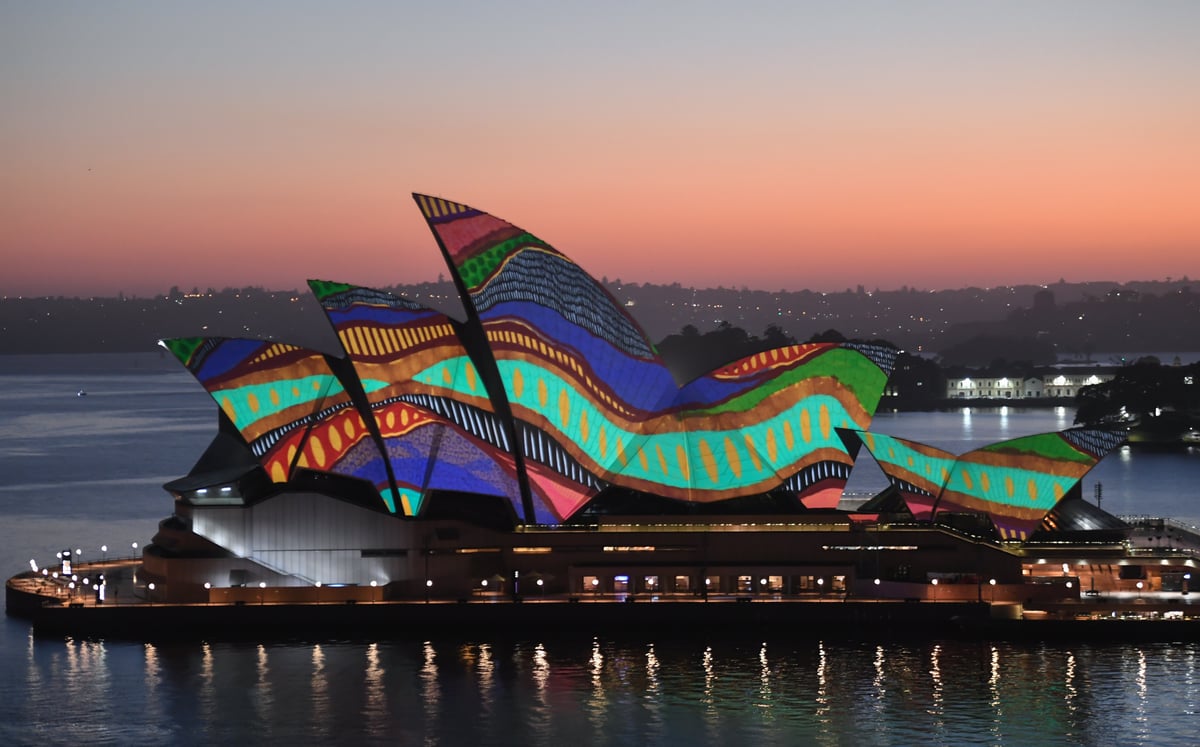 An Indigenous artwork is projected onto the sails of the Sydney Opera House at dawn on January 26, 2021 in Sydney, Australia. Image: James D. Morgan/Getty.

The alleged child sex abuser has been handed over to Australian authorities and was en route via Frankfurt on Monday, Manny Waks, a longtime victim supporter and CEO of support group VoiCSA, confirmed to AAP.

The Jerusalem Post reported that Leifer left earlier in the day, just hours before the closure of Israel's airports due to the coronavirus pandemic.

Pictures published by local media show her about to board a flight wearing handcuffs and legcuffs.

One of her alleged victims, Dassi Erlich, tweeted on Monday that "Leifer is on the way back to Australia".

Leifer is wanted in Australia on 74 charges of child rape and sexual abuse stemming from her time as principal at Melbourne's Orthodox Addas Israel School.

In a tweet, Mr Nissenkorn wrote on Monday: "I promised that I would not hinder the extradition order, and that's what I have done. Malka Leifer's victims will finally earn an act of justice."

Leifer's final failed appeal followed 74 hearings in Israeli courts, which have been drawn out on the basis of her mental illness claims.

She fled Australia to Israel in 2008 when the allegations arose, using a plane ticket allegedly paid for by the Addas School.

Health Minister Greg Hunt late on Monday announced quarantine-free travel from New Zealand would be suspended for 72 hours while officials investigated a case of a South African variant of COVID-19.

Since October, New Zealanders have been able to travel to Australia quarantine-free if they have been in NZ for 14 days or more and not been in a designated hotspot.

On Sunday, NZ health authorities revealed a 56-year-old Northland woman had tested positive for the virus after completing her 14-day isolation after arrival in New Zealand.

The Australian government has suspended quarantine-free travel for New Zealanders arriving in Australia for a minimum of 72 hours, after a South African variant of Covid-19 was detected in a woman after 14 days of quarantine in New Zealand. https://t.co/cdJHXd9LjH

The woman returned two negative tests while in her compulsory hotel stay, and was released on January 13 before travelling around the region with her husband.

All passengers from New Zealand with a flight scheduled in the next 72 hours have been advised to reconsider their need for travel to Australia.

TGA approves COVID vaccine for use in Australia.

The Prime Minister Scott Morrison on Monday revealed that the Therapeutic Goods Administration had given provisional approval of the Pfizer vaccine for people aged 16 and over in Australia.

Aged care and disability residents and workers, frontline healthcare staff, as well as quarantine and border employees are at the front of the queue.

Two doses at least 21 days apart will be required.

The Pfizer COVID-19 vaccine has been approved for use by the TGA in Australia ahead of its planned roll out in February. pic.twitter.com/UqIj7Wxn20

While the program is now slated to start in late February instead of the middle of the month, the federal government has conceded shipping or production issues could delay it to early March.

The late-March target to vaccinate four million people has been pushed back to early April because of global supply chain issues.

Most parts of NSW and the ACT have sweltered through a second consecutive sticky night, with relief unlikely to arrive until the latter half of today.

Temperatures across most of southeast Australia have spiked over the past three days, with a cool wind change on Monday delivering better conditions in South Australia, Tasmania and most of Victoria.

But in NSW and the ACT, the heat will extend into the January 26 public holiday, prompting warnings from health authorities for people to stay hydrated and safe around water.

Five people have drowned in NSW in the past seven days while another two men drowned in separate incidents in Victoria on Saturday.

US House to send impeachment to Senate.

As the House prepares to bring the impeachment charge against Donald Trump to the Senate for trial, a growing number of Republican senators say they are opposed to the proceeding, dimming the chances that the former US president will be convicted on the charge that he incited a siege of the Capitol.

House Democrats will carry the sole impeachment charge of "incitement of insurrection" across the Capitol on Monday evening, a rare ceremonial walk to the Senate by the prosecutors who will argue the case.

They are hoping that strong Republican denunciations of Trump after the January 6 riot will translate into a conviction and a separate vote to bar Trump from holding office again.

The US House of Representatives is to deliver a single article of impeachment to the Senate on Monday accusing Donald Trump of inciting the storming of the Capitol, triggering the first-ever impeachment trial of a former president https://t.co/dIONEejJ4B

Chief Justice John Roberts is not expected to preside at the trial, making a change from Trump's first impeachment.

Instead, Democrat Senator Patrick Leahy, who serves in the largely ceremonial role as president pro-tempore of the Senate, is expected to preside because Trump is no longer in office, according to a person granted anonymity to disclose the planning.

But Republican feelings appear to have cooled since the insurrection.

Now that Trump's presidency is over, a number of the Republican senators who will serve along with Democrats as jurors in the trial are speaking out against it, as they did during his first impeachment trial last year.

The UK will announce enforced quarantine for arrivals in the country, broadcaster ITV reports, after Prime Minister Boris Johnson said that new coronavirus variants were prompting a review of border policy.

"Hotel chains tell us they expect govt to announce enforced quarantine for those arriving in UK tomorrow. They are already preparing following discussions. People would quarantine for 10 days under security with all meals in rooms - price upwards of 1,500 pounds," ITV's UK Editor Paul Brand said on Twitter.

Coming up on @itvnews... Hotel chains tell us they expect govt to announce enforced quarantine for those arriving in UK tomorrow. They are already preparing following discussions. People would quarantine for 10 days under security with all meals in rooms - price upwards of £1500.

"Decision still to be signed off at meeting of ministers tomorrow but several government sources say disagreement is only over the detail. General policy looks pretty nailed on."

US President Joe Biden has overturned a ban by his predecessor on transgender individuals serving in the US military.

"President Biden believes that gender identity should not be a bar to military service and that America's strength is found in its diversity," the White House said in a statement.

"Allowing all qualified Americans to serve their country in uniform is better for the military and better for the country because an inclusive force is a more effective force. Simply put, it's the right thing to do and is in our national interest," it said.

- The world is losing ice at a record and increasing rate, with a total of 28 trillion tonnes melted between 1994 and 2017 according to a study published by the European Space Agency.

- Google employees from across the globe are forming a union alliance.

- Sweden will cull about 1.3 million chickens after bird flu was found on a farm in the southwest of the country.

fedup a month ago