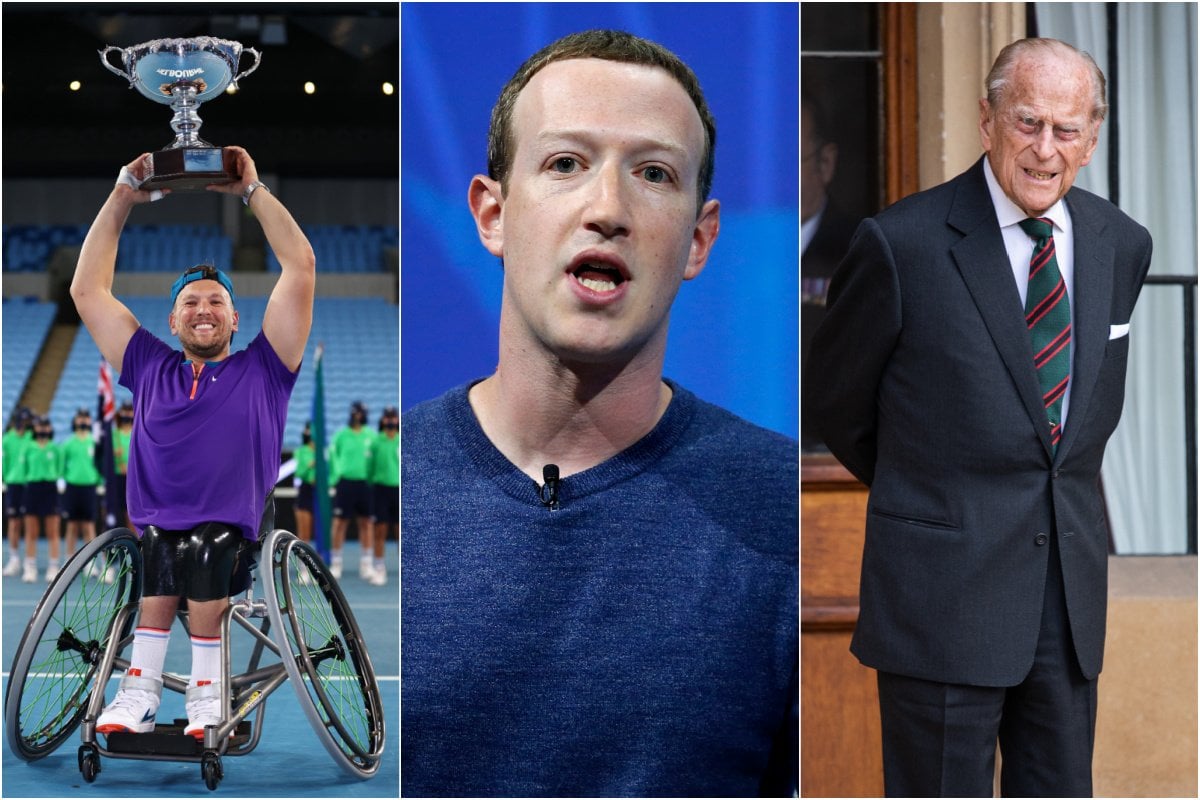 Facebook will restrict publishers and users in Australia from sharing or viewing Australian and international news content.

The social media giant said in a blog post that the move was in response to the federal government's proposed legislation to create a news media bargaining code.

#BREAKING: Social media giant Facebook has announced it will ban publishers and users in Australia from viewing or sharing news.

It comes in response to proposed new laws that would force tech companies to pay media organisations for content. pic.twitter.com/nKfmqWUYEj

"It has left us facing a stark choice: attempt to comply with a law that ignores the realities of this relationship, or stop allowing news content on our services in Australia. With a heavy heart, we are choosing the latter."

The irrepressible Dylan Alcott has won his seventh Australian Open quad singles title, with the world No.1 celebrating a 6-1 6-0 victory over Dutchman Sam Schroder.

Asked about his next big aim, the 30-year-old is desperate to shoot for gold at a rearranged Paralympic Games in Tokyo this year.

A true champion, on and off the court. @DylanAlcott

"Once, every four years people with disability are the stars.

"People say, 'why not have the Paralympics and Olympics combined?'

"I'm like, 'when Usain Bolt was running, I fully appreciate everyone will watch him and not me. But guess what? When I'm on, we're the stars, right?'

"That's why I love the Paralympics. For two weeks, it's the big show."

The win came two days after he and Heath Davidson wrapped up the quad doubles title for the fourth straight year.

For a crowd pleaser like Alcott, having no fans was frustrating as he looks to wrap up his career in the not to distant future.

"No crowds, bit of a weird day. I was like, I think I have to do one more AO. But I might hit that last ball at the Paralympics and be like, 'I'm done'," he mused.

"It's a cliche but you know when you know. I know I'm getting close."

Prince Philip, Queen Elizabeth's 99-year-old husband, has been admitted to hospital as a precautionary measure with an ailment that is not coronavirus-related.

The prince, whose official title is the Duke of Edinburgh, walked into hospital unaided on Tuesday evening after feeling unwell for a short period, a royal source said.

"The Duke's admission is a precautionary measure, on the advice of His Royal Highness's doctor, after feeling unwell," Buckingham Palace said in a statement on Wednesday.

He is at the King Edward VII Hospital in London where he is expected to remain for a few days of observation and rest.

He does not have a COVID-19 related illness, the royal source said.

Within an hour of his arrival, camera crews and photographers from the UK, Australia, France and Germany had gathered outside the hospital where policemen stood guard.

The Queen, 94, remains at Windsor Castle near London, where the pair have been staying during the coronavirus pandemic.

From Thursday, schools, offices, restaurants and shops will be able to reopen, and people will be allowed to leave their home for any reason.

Masks, however, will remain mandatory indoors and outdoors when physical distancing isn't possible, while home gatherings will be limited to five visitors, down from 15.

From 11:59pm 17 February 2021 Victoria returns to COVIDSafe Summer restrictions with some revised conditions.

Public outdoor gatherings are also limited to 20 people, down from 30.

Gyms, community facilities and entertainment venues can also reopen, while religious gatherings and ceremonies will be able to resume, subject to density limits.

Fans will also be able to return for the final days of the Australian Open tennis tournament, with crowds at Melbourne Park to be capped at 50 per cent capacity.

The new suite of restrictions will remain in place until February 26.

The outbreak now stands at 19 cases, while almost 3500 close contacts remain in isolation.

Changes to the family court system will reduce delays and backlogs, with as many as 8000 extra cases resolved annually, the federal government says.

Labor argued, with the backing of more than 150 organisations working in the system, the laws were deeply flawed and could make a bad situation worse.

The Family Court of Australia is not like our other courts - it was specifically set up to be a dedicated family law court to deal with the most complex family matters and to help protect the children, families, and survivors of family and domestic violence

Shadow attorney-general Mark Dreyfus said the stand-alone specialist Family Court was crucial to the wellbeing of thousands of Australians.

However, Attorney-General Christian Porter says the merger will simplify the system with independent analysis showing up to 8000 additional cases could be resolved each year as a result of efficiencies.

The laws - passed with the support of One Nation and independent Rex Patrick - will create a single entry point, and one set of forms, procedures, rules and practice management styles.

Government under fire over alleged abuse.

Prime Minister Scott Morrison has been accused of victim-blaming by a former Liberal staffer who alleges she was raped at Parliament House.

Brittany Higgins says she was sexually assaulted by a male colleague in a ministerial office in 2019.

Ms Higgins says the government has questions to answer in how they have handled the matter.

Defence Minister Linda Reynolds, who employed Ms Higgins at the time, has known about the incident for nearly two years but did not tell Mr Morrison.

Labor frontbencher Penny Wong says the community has not seen the standards it expects from government.

She says Ms Higgins had been left to deal with the trauma of her assault, which eventually made her leave her workplace.

Ms Higgins went public with her story this week, which she says has resulted in her finding out key elements of what happened.

"The continued victim-blaming rhetoric by the prime minister is personally very distressing to me and countless other survivors," Ms Higgins said in a statement.

Brittany Higgins has just released this statement in response to the lies and secrecy that have surrounded her alleged rape for almost two years, and seriously calls out the Prime Minister for what she sees as his continued victim blaming of her. #auspol @ScottMorrisonMP pic.twitter.com/2o8ZiKRnax

"And (they) continually made me feel as if my ongoing employment would be jeopardised if I proceeded any further with the matter," Ms Higgins said.

"The government has questions to answer for their own conduct."

The Daily Telegraph reports the staffer accused of raping Brittany has checked himself into hospital because he was "concerned with his mental state."

Rudy Giuliani, the talking head of Donald Trump's unsuccessful attempt at overturning the presidential election results, is no longer representing the former president in any legal matters.

A person familiar with the matter told CNN that Trump instructed his staff to stop paying Giuliani’s legal fees, signaling his frustration with his longtime ally following the House’s vote last month to impeach him for the second time.

This week a senior Republican filed a civil lawsuit against Trump alleging he and Giuliani violated an anti-KKK law in conspiring to incite the Capitol riot.

Breaking News: The NAACP filed a lawsuit against Donald Trump and his personal lawyer Rudy Giuliani, claiming that they violated a 19th-century statute, the Ku Klux Klan Act, when they tried to prevent the certification of the election on Jan. 6. https://t.co/BSvpUNSa8L

Trump has spoken in his first televised interview since leading the White House, calling into Fox News to pay tribute to radio talk show host Rush Limbaugh, but he still took a swipe saying, "I think it's disgraceful what happened, we were like a third world country on election night."

#BREAKING: Donald Trump has spoken out in his first television interview since leaving the White House. #9Today pic.twitter.com/trnWWloEvs

- Stefanos Tsitsipas has been left "speechless" after overcoming a two-set deficit against Rafael Nadal at the Australian Open, with Australia's Ash Barty also making a shock exit ahead of the semi-finals.

- Hundreds of thousands of people have marched in Myanmar to show their opposition to military rule.

- Unidentified gunmen have attacked a secondary school in Nigeria's Niger state and abducted a large number of students, the state governor's spokeswoman says.

Reply
Upvote
Don't read news at all via Facebook, so this won't mean much to me. I'm not particulalry engaged with FB these past few months anyway.
I wonder if MM will be banned?
Facebook are worried about a worldwide domino effect and don't want to set a precedent. I don't think that it'll mean a huge drop in ad revenue, so FB might be able to hold this standoff for some time.
FB have included sites like BOM, which I imagine likely wouldn't be asking FB for payment, to maximise inconvenience for Australian users and thereby, creating incentive to harass govt. to end impasse.
Labor are weaponising this as an LNP gaffe, not sure that'll get much traction. Maybe. FB isn't of high value for me, but I know that this is very different for other people.
A
amy a year ago

Reply
Upvote
@gu3st If it drops anyone's revenue it will be the media companys - Facebook gives them millions in free traffic, so hopefully Murdoch et al see some consequences for this push. The inclusion of BOM etc was all based on algorithms - Facebook's own page was blocked! And that is all being rectified now.
I hope Facebook stands strong on this - the gall thinking they should pay for providing other sites with traffic!
G
guest2 a year ago

Reply
Upvote
@amy Well, it will also affect the owners of The Age, Guardian and perhaps, the Socialist Weekly
K
kelly a year ago

Reply
Upvote
@guest2  Yes apparently they are but sometimes they squirm onto the dirt road and the fright makes a person brake and skid OOPS.
K
kelly a year ago

Reply
Upvote
Re Story #5 Family Court.  This is appalling to take us backwards,  we were the model for other countries in the world after 1975 marriage act and the start of the Federal Family Court. It would function just fine if the GOVERNMENT FUNDED IT. Nothing can survive without funding. The never ending arrogance and narrowness in thinking,  of this conservative, religious  government is going  to have serious ramifications if something isn’t done  soon. They need to be ousted. We need a government with foresight. Terribly worrying.
News
General
Opinion
True Crime
Politics
Sport
Explainer
Entertainment
Celebrity
Reality TV
Movies
TV
Books
Rogue
Royal
Lifestyle
Beauty
Fashion
Weddings
Home
Wellness
Health
Fitness
Travel
Food
Parents
Before The Bump
Pregnancy
Baby
Kids
Teens
School
Parent Opinion
Work & Money
Money
Finance
Career
Lady Startup
Relationships
Sex
Dating
Separation
Friendship
Family
Real Life
Couples