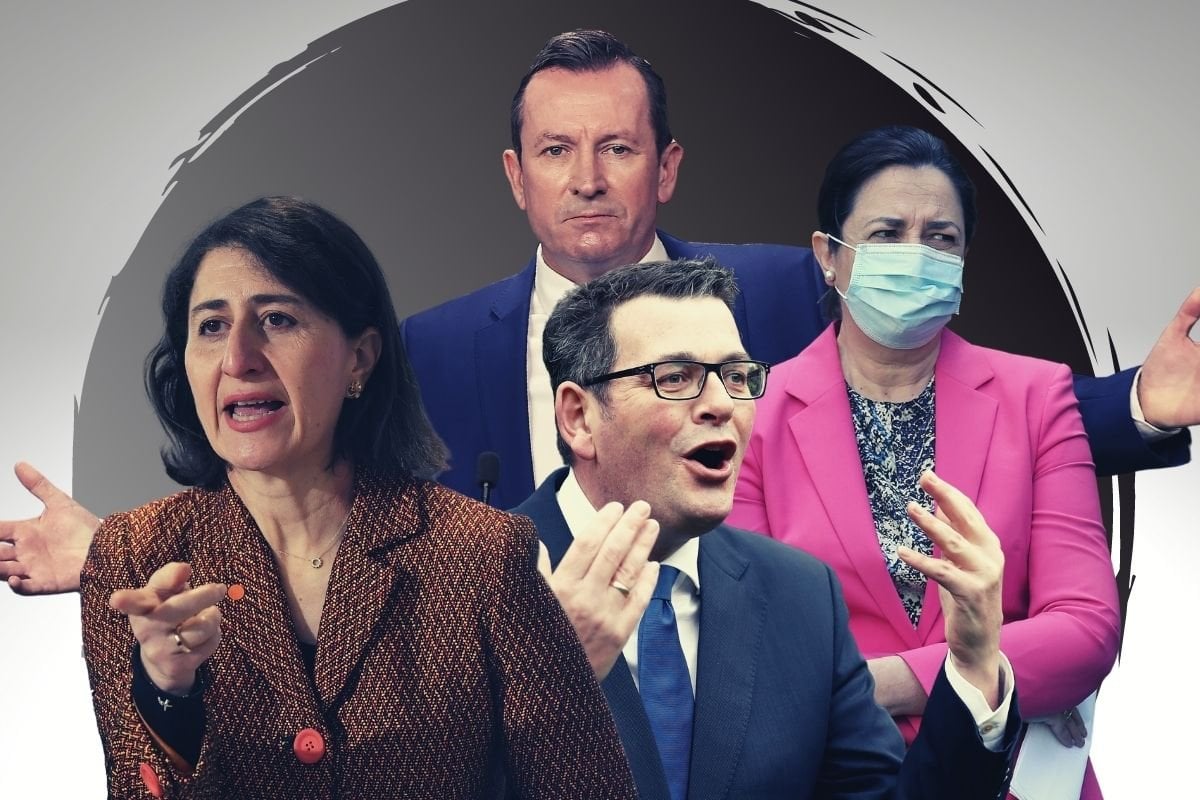 I have family members living in NSW, Victoria, QLD and WA.

Friends too. I have friends in every state and territory in Australia.

But right now, if you do a flick between the daily press conferences of Gladys Berejiklian, Daniel Andrews, Annastacia Palaszczuk and Mark McGowan in particular, you'd think we all lived in separate little warring nation states that absolutely despise each other.

You'd think we all have passports that read 'Queenslander' or 'Victorian'. Not that we all have the same passport that reads 'Australian'.

You'd forget that behind our leaders are millions of residents telling their loved ones, "well, hopefully we can see for you for Christmas?"

Because it doesn't seem to be about us anymore. It's just descended into boasting and snide comments and brutal criticisms from one leader to another.

It's like watching a classroom of kids having a go at each other, with no teacher in the room to tell them to pull their heads in.

And yes, Scott Morrison. In this analogy you are the absent teacher.

It's a state and territory leaders' job to think of their constituents and plan according to their needs alone. But as the prime minister, it's Scott Morrison's job to make sure our country's needs are also being met.

Instead, we are a country divided right now. But it's not us, the people, doing the dividing.

I am still messaging my best friend in Melbourne daily, commiserating with her when her lockdown gets extended, and sending birthday wishes to QLD where my cousins are living freely. We are not at loggerheads, we're just supporting one another through every blow, counting down the days when we might be able to see each other again. But our premiers seem to think we're enemies, throwing pointed barbs at each other whenever they get the chance.

While I am in QLD in relative COVID freedom, both my girls are in VIC. I see the VIC case numbers today and weep - no idea when I will see them again. I miss them deeply.

Please Premiers, get this sorted. Stop fighting. Work together. Bring us all back together as one country.

"The national plan is about all of us moving ahead. Not a national plan for picnics," snarked Victorian Premier Daniel Andrews on the NSW loosening of restrictions for the double-vaccinated.

"Have a look at Queensland at the moment: you can go to work and go to school, you can go watch sport, you can play community sport, you can go to a restaurant, you can go out, we haven’t given up...and look where we’re living," boasted QLD Premier Annastacia Palaszczuk when Morrison urged the states to commit to the plan to live with Covid once 80 per cent of the population is vaccinated.

"I don’t want NSW to come here, I don’t want the NSW approach. I want us to continue the extraordinary life, the success, the great health outcomes we’re currently experiencing. Just because the NSW government has comprehensively failed....," said WA Premier Mark McGowan.

"No they didn't," chuckled NSW Premier Gladys Berejiklian when asked why she hadn't tightened the rules about who an essential worker is, like Victoria had done so successfully.

Expecting state premiers to lead on national unity is like expecting my kids to lead on not eating mixed lollies.

But this isn't a campaign trail, this is a global pandemic and we're all looking at our respective leaders to be pillars of strength and calm and unity. Instead, every state and territory in Australia has a different rule and a different interpretation on the science.

NSW says it's safe to start gradually opening up 70 percent double jabbed, even though kids won't be included in those numbers.

QLD says that's a disaster, because "what's going to happen to the children?"

Treasurer @JoshFrydenberg blasts Queensland Premier @AnnastaciaMP for using children as an excuse to not reopen her state border when vaccination targets are met. pic.twitter.com/CUlQlgbjR3

It's all so contradictory, and our governments wonder why people are marching in the streets protesting? Perhaps if they were getting uniformed, clear advice they wouldn't feel the need to rebel. Perhaps if their leaders weren't fighting, they wouldn't either.

Out of curiosity while writing this article, I Google'd "How to be a good boss." The common responses that popped up included; communicates clear vision, sets performance expectations, decisive, supportive, and here's the clincher: get's to know employees.

If our leaders got to know us, they'd realise we aren't fighting with our interstate loved ones. The majority of us are sitting at home, getting vaccinated and trying to look to our leaders for some kind of direction and reassurance that there's light at the end of this awful tunnel. That we can look forward to a safe and staged return to normal.

Instead they're too busy looking at each other, mixing up a big bowl of discontent. While their leader, Scott Morrison, pipes up every now and then with a call for everyone to "stick to the national plan" before he adds "but...it's up to the states."

I’ll say it again. @ScottMorrisonMP should have state premiers on conference calls every single day till this is over. Get everyone on the same page. The constant pot shots during press conferences helps nothing. #COVID19Aus

We're on a never-ending merry-go-round of politicians playing politics with our lives.

It'd be nice if they remembered the fatigued, terrified, separated Australians who are watching on from home.

Reply
Upvote
Is there an admin or someone I can please message regarding something. Thanks.

Reply
Upvote
1 upvotes
Gladys has failed miserably, she said herself we got it wrong. The first 8 days was where she failed, she would not lockdown and assess the situation. I would lock out NSW too if I was the other states. She is very over confident, last year I clearly remember a snide remark out of her mouth I saw and heard her say it. She said ‘if you were in Victoria or Qld you would be locked down now’ as NSW had some cases. I thought at the time, prevention is better than cure, don’t be too cocky it might come back to bite you, IT DID. She placed too much onto contact tracing and it brought her unstuck big time and the whole of NSW.
S
suz 5 months ago

Reply
Upvote
@gypsy  She is stubborn that is her problem.
G
gypsy 5 months ago