A record number of women have been appointed to the frontbench by prime minister Anthony Albanese, who has unveiled his new ministerial team.

The prime minister announced a frontbench of 30 members on Tuesday night, with 13 of them being women, 10 of them being in the cabinet. Albanese says his cabinet has more women than any other in history, but also acknowledged that he wants to work towards 50-50 representation more broadly.

Don Farrell will be trade and tourism minister as well as special minister of state.

Tony Burke will be employment minister.

Mark Butler will assume health in the cabinet.

Chris Bowen being in charge of climate change and energy.

There will be a change of portfolio for Tanya Plibersek, who will take on environment and water, while education will be taken on by Jason Clare.

Catherine King will be in charge of infrastructure, transport and regional development.

Linda Burney will be Indigenous affairs minister, the second Aboriginal person to assume the role.

Former opposition leader Bill Shorten will be minister for NDIS and government services.

Amanda Rishworth will be in charge of social services.

Mark Dreyfuss will be the new attorney-general.

Brendan O'Connor will be minister for skills and training.

Julie Collins will be housing and homelessness minister.

Michelle Rowland will be communication minister.

Murray Watt will be agriculture minister, Ed Husic as industry and science minister, while Clare O'Neil will handle home affairs.

Several new faces will make up the frontbench, including Western Australian MP Anne Aly, who will become early childhood and youth minister, while Eden-Monaro MP Kristy McBain will take on the portfolio of regional development and local government.

Matt Keogh takes on veterans affairs, while Pat Conroy will be in charge of defence industries.

Stephen Jones will be assistant treasurer, while Andrew Giles is immigration minister in the new frontbench. Annika Wells has assumed the role of aged care minister and sport.

Albanese said the cabinet would be the most experienced from a Labor government since federation.

The full frontbench will be sworn in at a ceremony in Government House on Wednesday morning. Of the 30 member frontbench, 16 will come from the ‘right’ and 14 from the ‘left’ factions of the political party.

Proud to lead an inclusive government that is as diverse as Australia itself. Welcome to all these new Labor members. pic.twitter.com/spdMk5znQf

How Tom Cruise tricked us into forgiving his sins.

More than 100 British actors and public figures have put their names to an open letter calling for better on-screen representation of older women. Here’s everything you need to know.

And after weeks of it dominating news headlines, the defamation trial between Johnny Depp and Amber Heard is coming to an end, but even a last-minute piece of damming information can’t change the public outcome.

Plus, right now we are living in the Tom Cruise renaissance period, spurred on this week with the incredible performance of Top Gun: Maverick at the global box office. But when you look back at Tom Cruise’s controversial career, it looks like he was playing a long game when it comes to tricking the public into forgetting his past.

Listen to The Spill below:

Labor to form majority government, and all the news you need to know this morning.

The Liberals and Nationals got a bit of a shake up yesterday after Peter Dutton was confirmed the new Liberal leader and David Littleproud defeated Barnaby Joyce as head of the Nationals.

In light of the news, we rounded up everything we know about Peter Dutton including his early years as a police officer, right here.

But first, let's get you across the top news stories you need to know today, Tuesday May 31.

Warning: This post deals with allegations of domestic violence and may be triggering for some readers.

More than a week after the election, Prime Minister Anthony Albanese has won a majority government after Labor picked up 76 seats.

Labor reached the target last night after retaining the Melbourne seat of Macnamara, according to ABC election analyst Antony Green.

The seat was secured for Labor incumbent Josh Burns following a tight, three-way contest between Labor, the Greens and the Liberals.

Counting still continues in two marginal seats, with the results still close to call in the NSW seat of Gilmore and the Melbourne seat of Deakin.

Albanese will announce his cabinet today, after a caucus meetings in Canberra.

The frontbench will be formally sworn in at a ceremony at Government House tomorrow.

2. Man face charged with murder after grandmother killed in Victoria.

A man has faced court over the death of a woman who was found injured at her home in Melbourne's northwest.

20-year-old Hayden Kidd was charged with murder after a 67-year-old woman, Shirley Kidd, was found with critical injuries at a Darley property about 10.30pm on Saturday.

She could not be revived by emergency services and died at the scene.

Police confirmed the pair were known to each other, and it is believed that Shirley was his grandmother.

Shirley is the 20th woman killed by violence in 2022, and one of two women killed over the weekend this Domestic and Family Violence Prevention Month.

“Not only was she a loving mum but, my god, she devoted her time and love to her grandkids. She would often be at the school picking up or dropping off one of her grandbabies.”

Kidd faced Melbourne Magistrate's Court for a brief hearing on Monday afternoon, where he appeared from custody via videolink. He was remanded to re-appear on October 17.

Christopher Dawson's brother says Lynette Dawson's disappearance was not unusual because wives had been known to leave their homes without contacting their families.

Giving evidence at his brother's murder trial yesterday, Peter Dawson said he never asked any questions when Lynette vanished in January 1982 because his wife's mother had done the same.

"Chris' wife was aware that my first wife's mother had left and done just that, not contacted her family, and for that reason, I didn't believe it was unusual," he told the NSW Supreme Court. 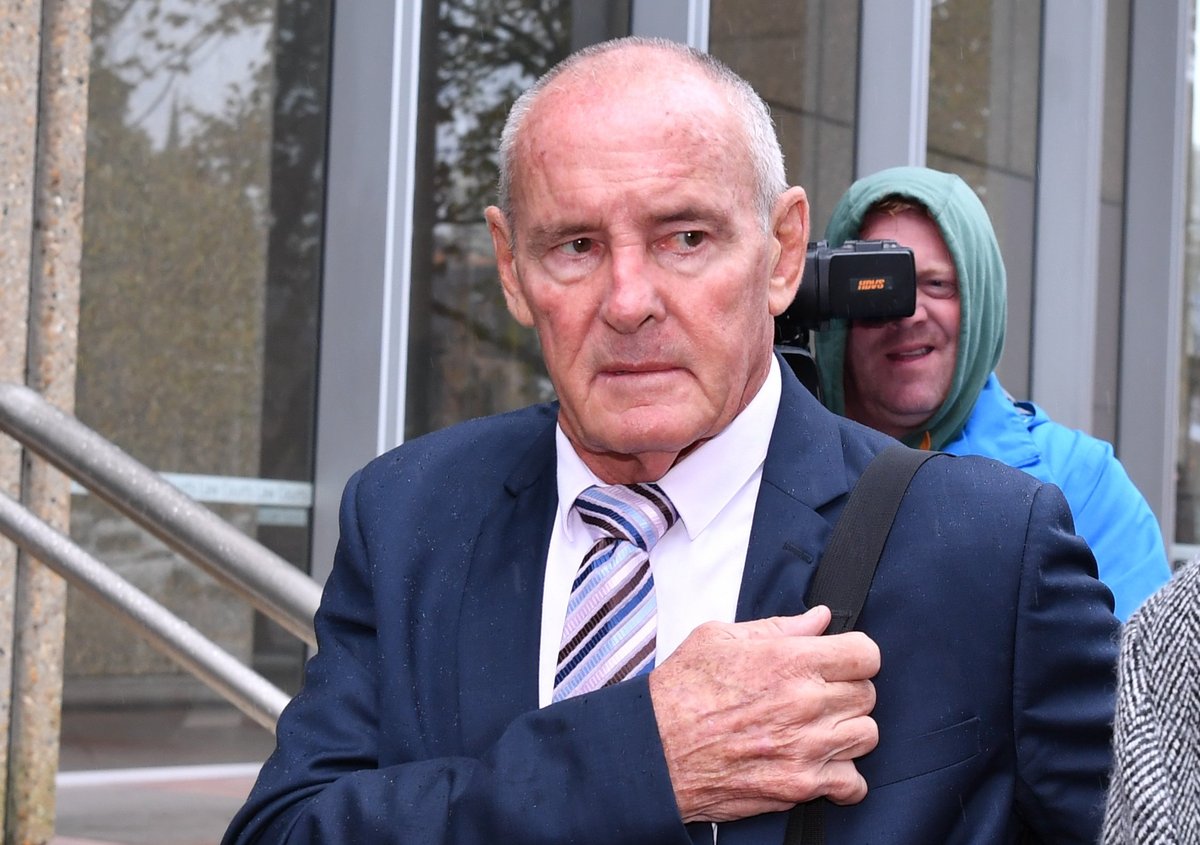 Dawson, 73, is accused of killing his wife and disposing of her body so he could have a relationship with one of his former students, known as JC. He has pleaded not guilty to the charge.

Peter also denied telling his brother that he could lose 40 to 60 per cent of all assets plus custody of their two children if he left Lynette, saying he was not aware his brother was experiencing marital problems until after Christmas 1981.

JC has previously testified that, before Lynette's disappearance, she overheard a phone call between the two brothers about what would happen to the family assets if the marriage ended.

Former co-worker Judith Solomon also told the court she saw Lynette with a "huge, horrible black eye" when bumping into her at the Warringah shopping centre.

"It was going green. It was going across the bridge of her nose into the other eye. It was really, really bad," she said.

Police say they have received "new leads" into the disappearance of Belgian backpacker Theo Hayez, following a $500,000 reward.

NSW Police announced the reward for significant information relating to the 18-year-old's disappearance earlier this year in February.

In a statement yesterday, private investigator Ken Gamble said he was continuing to investigate "credible leads" and is "very hopeful that the case will be solved".

“The recent $500,000 reward offered by the NSW government has brought forward new leads that are also being thoroughly investigated," he said.

Hayez was last seen leaving Cheeky Monkey’s nightclub in Byron Bay on May 31, 2019. A week later, he was reported missing when he failed to check out from his hostel in Byron Bay.

Three years on, his family are still waiting for answers.

"Every day Théo is missing is as difficult as the last as we navigate our endless and ambiguous grief and continue to seek answers to what happened to our boy," the family said in a statement.

"As with all families of missing people, we are unable to properly grieve and heal, as we don’t have a conclusion."

A visitor to the Louvre museum in Paris has thrown a piece of cake at the world-famous painting, the Mona Lisa.

The painting by Leonardo da Vinci was not damaged in its protective case during the attack on Sunday, a museum spokeswoman said yesterday.

The 24-year-old man had first pretended to be disabled in order to get a wheelchair and approach the work of art, the spokeswoman explained.

When he was close enough the man, who had donned a woman's wig, threw a cake - which had previously been kept hidden - at the display case containing the Mona Lisa, she said.

"Think of the earth, there are people who are in the process of destroying the earth," the man shouted, according to the newspaper Le Parisien.

The Mona Lisa was left shaken but unharmed when a visitor to the Louvre tried to smash the glass protecting the world's most famous painting, before smearing cream across its surface in an apparent climate-related publicity stunt https://t.co/4ZrGg0tXSK pic.twitter.com/56eXIGJf3h

The man was immediately detained by the supervisory staff and taken out of the exhibition hall, and the police arrested him.

He was taken to a psychiatric hospital where it will be determined whether he can be remanded in custody.

That's all the news stories you need to know this morning. We'll be back to bring you more of the biggest stories throughout the day.

Are fitness challenges helpful or harmful to our health?

If you've ever heard the adage 'summer bodies are built in winter', you might be tempted to take part in a fitness challenge at your local gym, or follow one of the hundreds of challenges that are popular with fitness influencers on social media.

But how effective are they really, and could you in fact be doing more harm than good to your body, or your long-term goals, especially if your exercise regime has slipped off during the pandemic?

The Quicky speaks to a woman who recently spoke out about her own fitness challenge experiences, and an expert in physical activity to find out whether they are really helpful or harmful to your health and wellbeing.