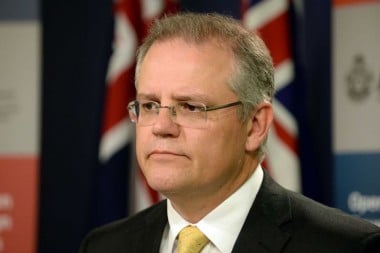 By NAOMI WOODLEY and GEORGE ROBERTS

Scott Morrison yesterday announced that asylum seekers who registered with the United Nations in Indonesia after July 1 would not be eligible for resettlement in Australia.

“We’re trying to stop people thinking that it’s OK to come into Indonesia and use that as a waiting ground to get to Australia,” he told the ABC’s AM program this morning.

Mr Morrison refused to say whether Indonesian president Joko Widodo had been informed of the latest policy, adding only that the Indonesian government was informed.

He said Indonesia, as a transit country, was used by smugglers.

“We’ve had great success in stopping people coming to Australia by boat and for most of that time over the past year, that has seen a significant reduction of people moving into Indonesia,” he said. “In recent months, we’ve seen a change to that and that’s because people think they can transit and sit in Indonesia and use that as a place to gain access to Australia. This is designed to stop people flowing into Indonesia and to support Indonesia and for them not to become a destination country.”

He said Australia’s humanitarian resettlement program would remain at 13,750 per year, with 11,000 resettled from overseas.

When asked if the new approach would apply to other transit countries, including Malaysia, Mr Morrison said it would not.

“In Malaysia in particular… they are predominantly refugees from Myanmar and so they are people that have largely gone to countries of first asylum,” he said.

A group of asylum seekers who arrived at the UN Refugee Agency in Jakarta yesterday were unaware of the policy change and said it may prompt them to try to reach the country by boat.

Speaking through an unofficial translator, two Afghan men said they would try to get resettled in other countries but would consider a boat voyage to Australia.

Another man, Ahmed from Sudan, who arrived two weeks ago, said he believed people would attempt boat voyages, though he said he was not willing to risk it.

Labor’s immigration spokesman Richard Marles said the Opposition was seeking an urgent briefing from the Government, and would also seek advice from the UNHCR about the effect of the change.

“Labor believes Australia needs to be generous in its humanitarian intake – when we left office the intake was 20,000 – that number has been cut by the Abbott Government to 13,750,” the statement said.

One of eight Senate crossbenchers, Family First’s Bob Day, said he agreed that Australia’s humanitarian intake should be increased, but he welcomed the Government’s announcement.

“I think the same way that the minister’s been able to stop the boats, then the next step is to stop the influx into Indonesia, and that can only be a good thing for Indonesia,” Senator Day said.

“Your first step in curbing this and solving this awful problem, the first step has to be fairly firm and harsh, but in the long run, in the long term it greatly outweighs the short-term pain.”

Greens and refugee advocates have condemned the policy, labelling it “cruelty”.

“It’s cruelty writ large to say that the Taliban are shocking and what they’re doing to Hazaras is wrong, but we will not take any of those refugees.

“What’s happening in Iraq is horrendous, refugees flying across borders but Australia won’t take any if they end up in Indonesia.”

Refugee Council of Australia chief executive Paul Power said the Government clearly did not understand what drove asylum seekers to go to Indonesia in the first place.

“Indonesia is less likely to implement some of the harshest policies against refugees that some other countries in the region implement, but there’s very little support for people who are there,” Mr Power said.

He said the Government’s new policy was inconsistent with its efforts to stop asylum seekers trying to reach Australia by boat.

“Now we’re saying, first to Indonesia, and who knows what country will be next, we’re not prepared to offer people resettlement through an organised process,” Mr Power said.

“Clearly the message at a time when global displacement is at a 60-year high, is Australia is actually turning its back on refugees in increasing numbers and expecting much poorer nations in Asia, the Middle East and elsewhere to bear a much greater responsibility.”

“They can’t work there … they’ll face the choice of just rotting there or going back to face their persecutors.

“It just makes our Government look mean and it is undermining the spirit of the refugee convention.”

What are your thoughts on the latest policy surrounding asylum seekers?

This post was originally published here and is republished with full permission.

Click through these drawings by children in detention, courtesy of the Australian Human Rights Commission:

This just makes my skin crawl. The obsession with refugees is just a means of creating fear and xenophobia. No one seems to get so up in arms about the amount of people over staying their tourist visas and working for cash in construction or hospitality - they're taking far more from the average Australian than refugees are. What happened to compassion?

The difference is, as been stated so many times, these people have identification so we know who they are. The boat people throw away their identification.

Sure, but that's only helpful if they're caught.

I'm a bit confused about the statement that in response people will get on boats to Australia. Surely all the refugee advocates have been telling us for years that the traffic is entirely driven by external factors and that nothing we do in Australia will impact on how many people get on boats?