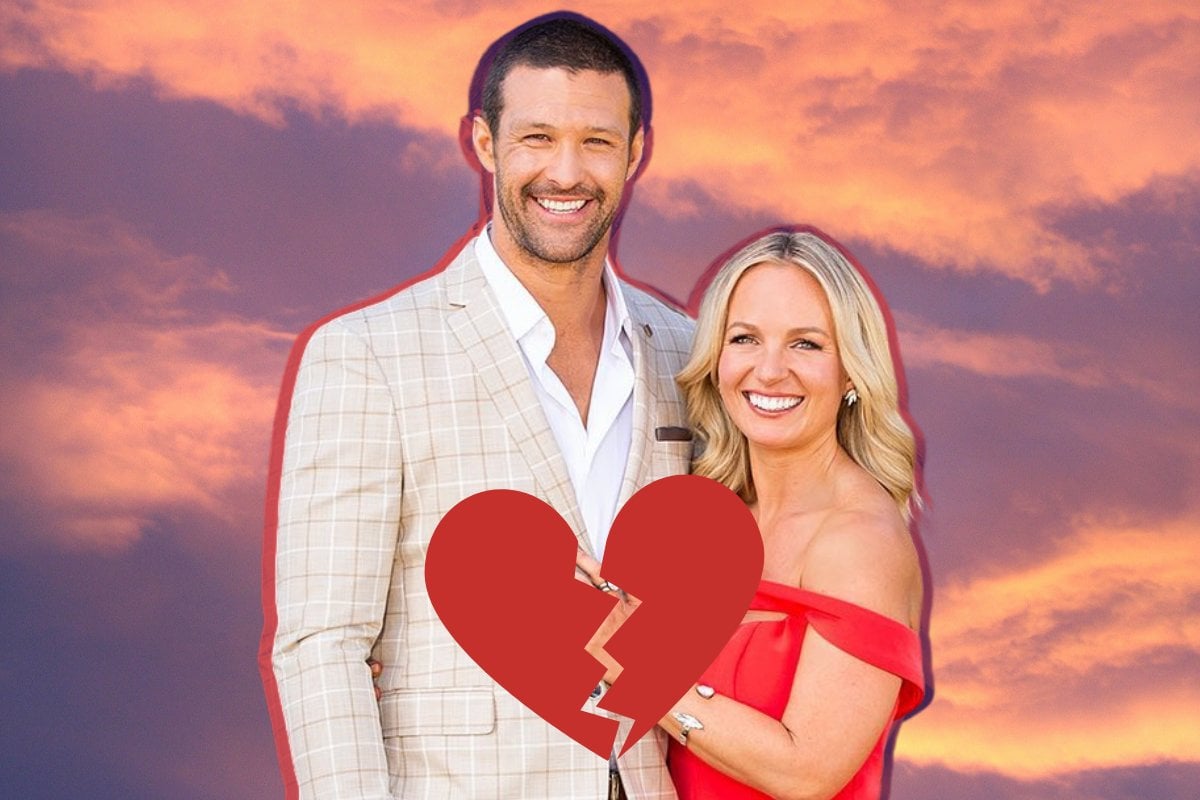 Yes, The Bachelorette 2020 wrapped up this week, and we finally got to see who ended up with who after being bombarded with (and constantly confused by) approximately four million rumours surrounding this season.

When it came to Becky Miles' love story we were pretty certain that the lassie from Parkes would end up with the fella from Adelaide, Pete Mann. Why? Well because almost all the rumours and betting odds told us that, and because runner-up Adrian's family accidentally leaked it.

But, after all that palava, we reached the sweet, sweet decision-making moment all reality TV shows lead us to. And we got to see Becky pick Pete and have a good old smooch sesh.

Now watch Elly and Becky on their hometown dates on The Bachelorette Australia 2020. Post continues after video.

After watching them mack on and run off into the sunset together on-screen, we - like the rest of Australia watching this love story - instantly googled to see if the couple were still together.

Because, if you're not across Bachelorette timelines, this 'finale episode' was filmed months ago and since the show wrapped Becky and Pete have probably been living apart in separate states. And now Pete will have watched an entire season of his girlfriend kissing and falling for other blokes - which we can only imagine is ten times harder when the aforementioned girlfriend isn't sat next to you, reminding you that you're the one she wants.

And... well, we have bad news. Pete and Becky have confirmed their breakup.

After ending the finale night with *crickets*, the (former) couple announced the split early on Friday morning.

"Thank you to everyone for coming on this incredible and crazy journey with Elly and I," Becky wrote in a post on Instagram.

"We came into this experience wanting a fairy tale ending for the two of us, and while I am thrilled that Elly found her person in Frazer, unfortunately things didn't work out with Pete and me."

OH NO. BUT ALSO, THIS CONFIRMS ELLY AND FRAZER ARE STILL TOGETHER.

Oops, back to Becky:

"Although I wasn’t lucky enough to find my person this time around, I am grateful for this opportunity and leave with fond memories and no regrets," she wrote.

"I wish Pete happiness and all the best in his search for love."

"The Bachelorette was such an amazing experience and one I'll always remember. I came on this show to follow my heart and find love but unfortunately in the end true love was not meant to be.

"Becky is a wonderful woman and I wish her nothing but happiness in life and love. It is truly what she deserves."

Pete also had something to say about Elly and Frazer, wishing them the best and saying they're "perfect for one another". Bless.

This is not exactly a surprise. Because like we said, there have been a lot of rumours and spoilers this season.

What IS a surprise? Exactly how Becky says it went down.

In an emotional interview with Nova 96.9’s Fitzy & Wippa, Becky explained how Pete broke up with her soon after the finale was filmed.

"We filmed the finale, we had a couple of days together, they were really lovely days.

"We left that saying, you know, we're going to miss each other, he was happy I chose him. We had plans to like go and…" she trailed off, getting emotional.

"We had plans to visit each other and see how things are going, I knew it wasn't going to be easy because I think he was a little bit closed off and I knew that. But I thought he was worth taking that risk because I saw lots of really good qualities in him."

Becky said there was no one else involved in the breakup.

"When he got home to Adelaide, about three days later we had a FaceTime and he said 'look I'm sorry I just can't do it'... I still feel quite confused, I'm not really sure [of Pete's reason why]. He said that he didn't see a spark there."

Becky said she had really hoped to give their relationship a go, but Pete wasn't willing.

"He just wanted to chuck in the towel without even having a conversation about it.

"I'm angry he didn't try, [but] at the same time I'm still grateful that he told me when he told me, he was 100% sure that he didn't want to continue."

Becky said she chose Pete as her "safe" and "secure" option over Adrian, who she described as her "heart decision".

She said Pete told her he had concerns around hometowns, which in hindsight she thinks meant "he was scared to really tell me how he felt".

She confirmed the pair had spoken this week, "and I think he’s happy with his decision".

"At the end of the day I didn't meet my person.

"If it was meant to be it would've happened and the thing is, like, I know I'm upset now but I'm actually in a really good place.

"Re-living all those moments like last night, [it] was really hard to watch it all back but you know what, there was to bachelorettes and I think to get one out of two is pretty good."

Obviously if you've been following along for this entire season of The Bachelorette, you will know that there had been a lot of evidence stacking up that Becky was single since the show finished filming.

The first chink in the Pete-and-Becky armour was that Pete supposedly didn't want to move away from Adelaide (where his family and three businesses are located) and Becky didn't want to relocate from Newcastle either.

Stuck in somewhat of a stalemate, it seemed feasible that distance may have crushed the couple.

Either that or, you know, she forgot to change it in the first place.

Pete was pretty damn quiet on the old rumours front, instead letting @thebacheloretteau manage all his comms with posts like this:

MESSAGE FROM PETE: This year is one that I’ll never forget and my time with Becky has been one massive adventure. I never thought I would be here at the end and I couldn’t be more nervous and excited. I came into this looking for the love of my life and right now in this moment I can’t wait to see what the future brings.

We can only imagine how tough it would have been for Becky and Pete to keep up a secret relationship while navigating a pandemic, paparazzi, and a bucket load of rumours.

We wish them all the best with finding love... just maybe not on a reality TV show, this time.