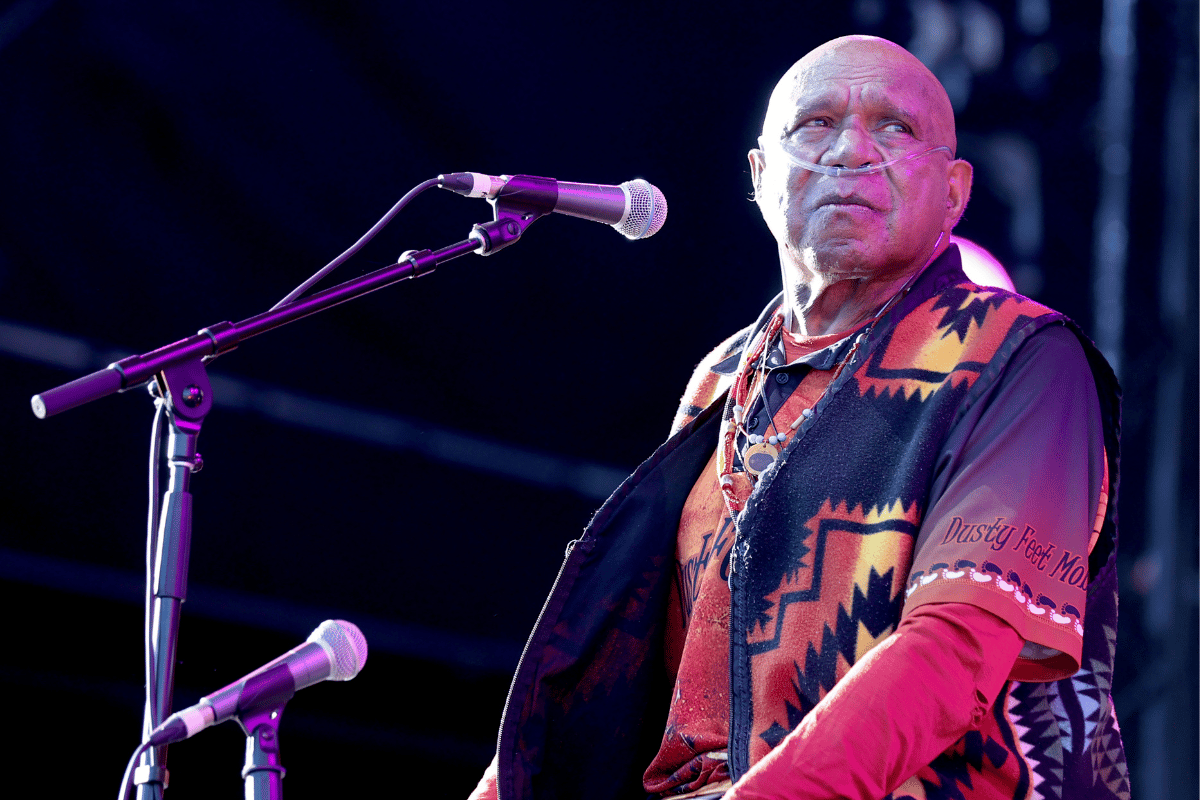 Content Warning: Aboriginal and Torres Strait Islander readers are advised that the following article contains images, names and voices of people who have died.

Archie Roach's family has given permission for his name, image and music to be used.

When Archie Roach AM was a young boy, he was taken away from his family.

Born in Mooroopna, a town in regional Victoria, in 1955, Archie's family lived on the Framlingham Aboriginal Mission near Warrnambool. His father, also named Archie, was a Bundjalung man from New South Wales, and his mum Nellie, was a Gunditjmara woman.

At the tender age of three, Archie became a part of the Stolen Generation.

Listen to No Filter. Story continues after audio.

After passing through an orphanage and several foster homes, he was settled with the Cox family at age seven - a white couple, Alex and Dulcie Cox, who had moved to Melbourne from Scotland. Archie acknowledged in his autobiography Tell Me Why that his foster parents looked after him well. But the trauma of being forcibly separated from his biological family - his Indigenous roots - affected him for the rest of his life.

Alex and Dulcie had been told by the government agency that Archie's biological parents had been killed in a house fire. It was only the start of a snowball of deception from those in positions of power.

Growing up in the Cox family, Roach was surrounded by music - particularly music from Black artists.

His foster father's record collection included albums by the Ink Spots, Nat King Cole and Mahalia Jackson, and Archie's foster sister Mary taught him the basics of keyboard and guitar. It sparked a love for music that would run through the rest of Archie's life. Archie still referred to them as 'Mum Dulcie' and 'Dad Cox' in his later life.

"A mate of mine who I grew up with in primary school asked me 'Archie, how come your parents are white?' And I didn't understand what he meant. I figured I was a bit darker than the Italian and Greek kids. I never saw myself as different until it was pointed out to me," Archie said on Anh's Brush With Fame.

When Archie was 15, he received a letter that stopped him in his tracks. It was from one of his biological sisters, Myrtle.

In the letter she told Archie that his biological mother, Nellie, has passed away, confirming to him that he was one of seven siblings - something he hadn't known.

Soon after that letter, he embarked on a journey to track down his family and uncover where he was from, taking his guitar with him. But it took a long time. And along the way, he faced hardship.

Over this next chapter, he experienced homelessness, alcoholism and a prison stint after being charged with vagrancy. He was still only 15.

"If it wasn't for this old Blackfella named Albert, I wouldn't have known what to do. He took me under his wing and showed me the ropes - where to get a feed, how to find a bed," Archie said. "The guitar made me feel safe."

It was a chance meeting with a sibling that reconnected Archie to his family.

"Poor old dad - after the kids were taken from him and mum, he struggled mentally and physically. He was picked up one night, put in jail, got a bit crook and asked the police to take him to hospital. They said 'Shut up you Black [slur], go to sleep'. Next morning he passed away. Never got to know the old man, or mum."

Archie said that it was through stories from his siblings that he feels as though he knows who his parents were, even if he was taken from them at such a young age.

At 17 in a Salvation Army centre in Adelaide, he met another homeless Indigenous Australian teenager with a similar history to his own - she too was a member of the Stolen Generation. Her name was Ruby Hunter, and she became the love of his life.

Ruby was also a musician, and they became a deadly duo.

Archie stopped drinking at Ruby's request, they married, had children and created music together. Years later, their house would remain open to disadvantaged young people in need of the support they themselves had found in each other.

By 1989, Archie had caught the attention of Australian musician Paul Kelly and his Messengers' bandmate, Steve Connolly.

After being encouraged by an uncle to write about his trauma, Archie wrote and sang 'Took the Children Away'. It was a hit that became an anthem associated with victims of the Stolen Generation - the lyrics touching on the pain and loss Indigenous people had endured at the hands of the Australian Government and their white assimilation policies.

Paul Kelly asked Archie to open for him at his performance at the Melbourne Concert Hall, and from there Archie's music career progressed. Archie and Paul then worked on an album together, Charcoal Lane.

Reflecting on that first big performance, Archie said to The Guardian that the response he received from the crowd never left him.

"Then the clapping started. It sounded like rain that starts with a pitter-patter and builds up and becomes a downpour. It was the most amazing experience I had ever had."

Later in 2008, Archie would perform the song 'Took the Children Away' with Ruby joining him on backing vocals, when then-prime minister, Kevin Rudd, gave a public apology to the Stolen Generations.

Archie went on to win Aria awards, create multiple albums, was inducted into the ARIA Hall of Fame in 2020 and toured Australia and overseas with artists including Bob Dylan, Billy Bragg and Leonard Cohen.

As for Ruby, she achieved mass success too - writing a powerful song 'Down City Streets' for one of Archie's albums. She also went on to record her own solo album.

The Archie Roach Foundation was also established, which aims to nurture meaningful and potentially life-changing opportunities for First Nation artists.

"The Foundation is a way for me to give back and pass on what's been given to me from people I've met on my journey who have pointed me in a different direction to a better way of life and understanding, to freedom," he previously wrote for the Foundation's statement.

"I hope to be a signpost for others, to walk alongside and empower them to tell their story through the arts to point them in a deadly direction; in particular young people within the youth justice system."

Given his contributions to the performing arts and Indigenous community, Archie was made a Member of the Order of Australia.

It was from this point that Archie's health began to falter. Over the years, he suffered a stroke, was diagnosed with lung cancer and had a lung removed. He was also diagnosed with chronic obstructive pulmonary disease, which he lived with for the rest of his life, often relying on an oxygen nasal cannula.

But his spirits remained high, and he continued to create music and champion Indigenous issues.

Just this month, he was on Triple J's Like A Version where he performed a Bob Marley medley for NAIDOC Week.

Sadly, over the weekend, his family announced that Archie died.

His sons, Amos and Eban, released a statement saying they were "heartbroken" to announce the death of the Gunditjmara (Kirrae Whurrong/Djab Wurrung), Bundjalung Senior Elder, songman and storyteller.

"Archie passed, surrounded by his family and loved ones, at Warrnambool Base Hospital after a long illness. We thank all the staff who have cared for Archie over the past month. Archie wanted all of his many fans to know how much he loves you for supporting him along the way," they said.

They also said they have given permission for Archie's name, image and music to be used, so that "his legacy will continue to inspire".

"We are so proud of everything our dad achieved in his remarkable life. He was a healer and unifying force. His music brought people together."